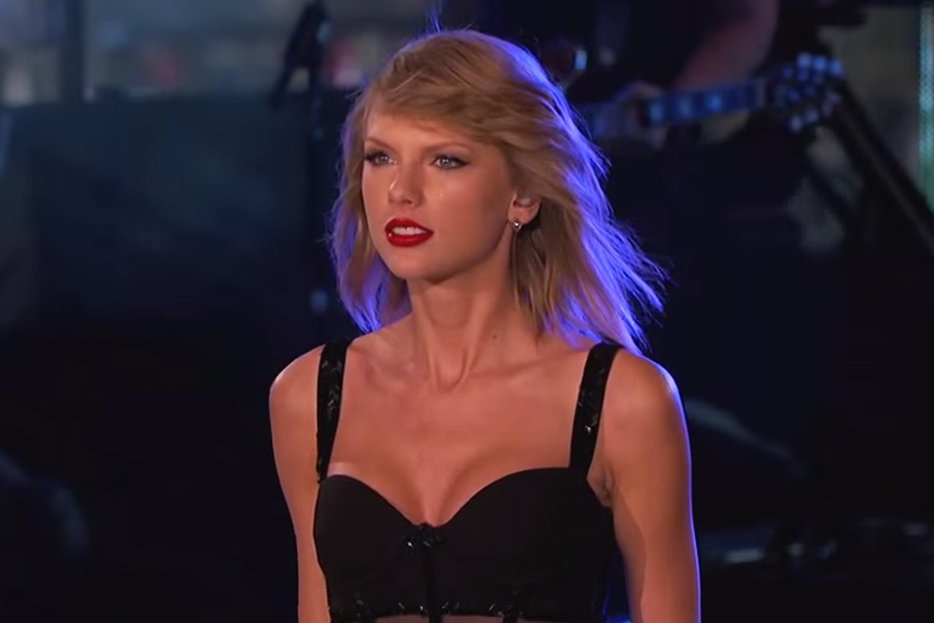 Taylor Swift performing "Out of the Woods" on Jimmy Kimmel

1. Some things that happened in 1989: The Soviet Union fled from Afghanistan. Mel Blanc, Alvin Ailey, Lucille Ball, Robert Mapplethorpe and John Cassavetes died. Tim Berners-Lee proposed what was not yet known as the World Wide Web, arguing “we should work toward a universal linked information system.” The ANC began forcing South Africa’s new president to dismantle apartheid. Fox broadcast “Simpsons Roasting on an Open Fire.” 2,246 people were murdered in New York City. John Cage performed How to Get Started, an improvisational monologue warped into a kind of music by sound engineers. The Exxon Valdez spewed chemical tar across Alaskan wilderness. Berlin found itself with a surplus of masonry. All these albums came out: Madonna’s Like a Prayer, Neneh Cherry’s Raw Like Sushi, Prince’s Batman, the B-52s’s Cosmic Thing, Dolly Parton’s White Limozeen,Fugazi’s 13 Songs, Billy Joel’s Storm Front, Quincy Jones’s Back on the Block, Garth Brooks’s self-titled debut, andJanet Jackson’s Rhythm Nation 1814. And Taylor Alison Swift was born in suburban Pennsylvania.

2. 1989 the record has been touted as Taylor Swift’s “first pop album,” not least by the musician herself, a tagline that misleads. Aside from one or two tracks, a couple of alternative mixes released to country radio, Red already got most of the way there. The genre was more than a guise for her—“Teardrops on My Guitar,” written in high school, has the circling ruefulness of a George Jones song—but in hindsight Swift’s ambitions seemed bound to chafe against it. She’s taking a calculated risk. The church of Nashville welcomes converts, yet fears apostasy. Garth Brooks spent nearly a decade in semi-retirement after the fascinating debacle that was Chris Gaines. The closest precedent for what Swift is attempting might be Shania Twain, who crossed over taking another route (all those stadium-rock guitars) and released her most recent album, 2002’s Up, in three different colour-coded editions (pop, country, and “international”). Then she effectively retired, stranded in flux.

3. The opening track “Welcome to New York” comes off as irritating schlock to me, but nearly every New York song that vies to be anthemic is schlocky on some level. The chorus of the 1894 hit “Sidewalks of New York” begins: Down in front of Casey’s old brown wooden stoop / On a summer’s evening we formed a merry group / Boys and girls together we would sing and waltz / While Tony played the organ on the sidewalks of New York. The maimed horses sometimes left to die next to those sidewalks go unmentioned. Would-be cynics trip themselves up in mythology too: Casting an eye over the “colored girls” of “Walk on the Wild Side,” Lou Reed looks even more voyeuristic than Swift’s “Shake It Off” video.

I try to resist that romanticizing, but I am helpless to other kinds, the “warm New York 4 o’clock light” that so excited Frank O’Hara. If a song like “Sidewalks of New York” is sentimental, Swift’s barely evinces recognizable sentiment. She could’ve recorded it for an NYU promotional video; she could’ve named it for 10 different cities. As a composition, “Welcome to New York” actually reminds me of the old Bowery song-pluggers, a teenaged Irving Berlin among them, who would pound out the latest bad ethnic comedy or template balladry for patrons and passers-by—not our only current parallel to the era of Nelson Aldrich and J. P. Morgan. She’s so good at describing emotional nuances that the genericized absence of detail was almost alarming on a first listen. “You made a rebel of a careless man’s careful daughter,” 2010’s Speak Now began, neatly suggesting whole histories. Maybe relationships of all sorts are just her métier, the subject she’ll spend decades failing to exhaust. Prince has gotten by well enough with sex.

4. “Much of her vaunted specificity or precision usually feels to me like someone trying for specificity or precision but they are a Martian whose exposure to Earth has come entirely through CW shows and Hollywood movies,” my friend Isabel told me, as praise, I think. Like Tess McGeer said: “All the most embarrassing things about Taylor Swift are the best things about Taylor Swift.”

6. According to 1989, Harry Styles is an inept but sexy driver; vaguely reminiscent of James Dean; the owner of many white T-shirts; really into passionately unresolved feelings.

7. When “Track 3” mistakenly leaked last week—eight seconds of white noise that Swift fans sent to #1 on the Canadian iTunes chart—ironists invoked Don DeLillo, Metal Machine Music and the John Cage piece 4’33”. This was 20 rungs higher than Cage himself has ever managed, an accidental pop zenith for avant-garde techniques, but the composer intended 4’33” neither as “silence” nor tuneless feedback. Drawing on some of his dubiously mystical ideas, its debut performance happened outdoors, in the hope that the surrounding environment could be reframed as music. The elemental caricature applied to Swift is more sexist and thereby conventional: Young woman-naif, strumming on a guitar, transforms her diary into music.

So discovering how affected the vocals of 1989 often sound was a revelation, as if Swift felt obliged to outdo all her new synthesizers. “I said ‘I heard that you’ve been out and about with some other girl’” she sings on “Style,” repeating with breathy anxiety “some other girl.” She manages to make the guy’s contrived mea culpa seem hollowly compelling, and then manipulates him back: “I said, ‘I’ve been there too, a few times…’” On “All You Had to Do Was Stay,” the last word of the title keeps recurring in such an unnatural tone you might think she had a whammy bar implanted. I hardly even noticed the lyrics of “How You Get the Girl,” because they’ve burnished every stray syllable into its own miniature hook. If this is diaristic, so’s the cut-up technique.

Taylor Swift Performs “Shake It Off”

8. “Does any of this matter?” Wayne Koestenbaum asks in his essay “My 1980s.” “I am not responsible for what matters and what doesn’t matter. Offbeat definition of materialism: a worldview in which every detail matters, in which every factual statement is material.” He goes on: “In 1989 I developed a sustaining, mood-brightening crush on the UPS man. Hundreds—thousands—of men and women in New Haven must have had a crush on that same UPS man. The first time he appeared at my doorstep with a package, I thought that a Candid Camera porn movie had just begun. If you want me to describe him, I will.”

“Wildest Dreams,” the 1989 song that everybody says reminds them of Lana Del Rey, strikes me more as self-pastiche—piling up familiar images until the person herself disappears inside their semiotic haze. Nice dress, sunset, red lips and rosy cheeks. I can see the end as it begins. Elsewhere in that same book, considering an old Polaroid of Debbie Harry, Koestenbaum writes: “The terror of being unable to explain [her] sublimity is built into the experience of apprehending it—the terror of being stranded with the gorgeousness, either as its proprietor or as its last living witness.” Say you’ll see me again, even if it’s just in your wildest dreams. The cover of 1989 looks like but is not a Polaroid, because Polaroid film doesn’t exist anymore. The probable alternative Swift went with produces its approximation as the Impossible Project.

9. Taylor Swift was raised by a family of bankers on a Christmas tree farm, which might account for her ability to convey both the romance and embitterment of fairy tales. Or the Kennedys fan-fiction she once recorded.

10. The purported diss track “Bad Blood” sounds so vague that you need secondary sources to find out the subject is Katy Perry. She never really justifies its tracklist-distorting bombast, yet her commitment to belligerence is refreshing in a sense. Swift’s revenge songs have occasioned some of her worst and most disingenuous moments: “Poor me,” but “fuck you.” There was that gibe about “the actress who’s better known for what she does on a mattress.” And Swift long ago repudiated the promise to “tell my friends you’re gay” from “Picture to Burn,” written in high school, although these days it tends to remind me of But I’m a Cheerleader. (Taking cues from many fans/conspiracists, I once tried interpreting her music in terms of “crypto-queerness,” represented most strongly here by “I Know Places,” which, yeah.) “Bad Blood” shows a willingness to play vicious, to be the “nightmare dressed like a daydream.”

Taylor Swift Performs “Out of the Woods”

11. As for “Out of the Woods,” maybe the single best song on 1989, we already obsessed over that one. But I never found in its harrowing and beguiling loops a negative of The Texas Chain Saw Massacre, like my friend Brad Nelson did: “At the end of the film, Sally leaps through the window of Leatherface’s house, and she spills into the incomplete light of dawn, the visible order of the world recomposing itself. Sally finds herself on the bed of a pickup truck, emitting high staccato cascades of laughter, overwhelmed by the fact of her own survival. ‘The monsters turned out to be just trees.’ There is the shot of Leatherface, reduced to mortal frustration, weaving his chainsaw in gorgeous helixes over his head. ‘When the sun came up, you were looking at me.’”

12. In his book 1989: Bob Dylan Didn’t Have This to Sing About, the critic Joshua Clover writes that pop music is “always at least two facts: the cultural artifact of the song and all that it communicates; and its popularity, its having been claimed by enough people to enter into mass culture.” And to him the great pop following the Cold War was amplified by the false consensus of the times, a sense that history itself might drop away behind us—neoliberal hubris now challenged on many different fronts. Swift’s 1989 doesn’t sound much like 1989; it found conceptual inspiration in that era instead. Pop single as event, celebrity as persona-play, musical style as fashions, and ecstasy as rapture. Reviewing 1989 for theNew York Times, Jon Caramanica said that it harkens back to a period when “pop was less overtly hybrid.” Really, the same one that spawned Rhythm Nation and Raw Like Sushi?

It depends on how you define “popularity,” but the alloyed surface of current pop masks a steadily paler singles chart. Of the many hip-hop-flavoured hits cycling through the Billboard Top 10, only three living black women have enjoyed one this decade. For all her performatively clumsy whiteness, which is also a tacit admission that she can’t dance like Ciara or sing like Beyoncé, Taylor Swift seems merely symptomatic of radio circa 2014: When corporate mergers and playlist segregation marginalize R&B, ignoring R&B can’t hurt you. No record released this year has sold a million copies total; she’ll manage that by next week. 1989 is a blockbuster from an industry no longer capable of them, a synth-pop breakup album lingering on sensuous desire. My own revision of it exchanges “Bad Blood” for the reverently ambient “You Are in Love” and “Welcome to New York” for the other bonus track “New Romantics,” which has the force of a manifesto: “Heartbreak is the national anthem … The best people in life are free.” Dance a hail of bricks with me. In the future everything will be just impossible. 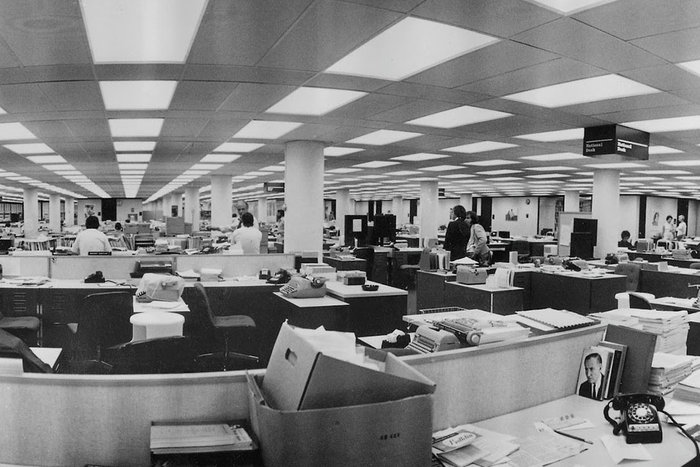 Media
How Predators Get Away With It
Why the Canadian media must do more to challenge its own sexism. And speak out against the abusers in its midst. 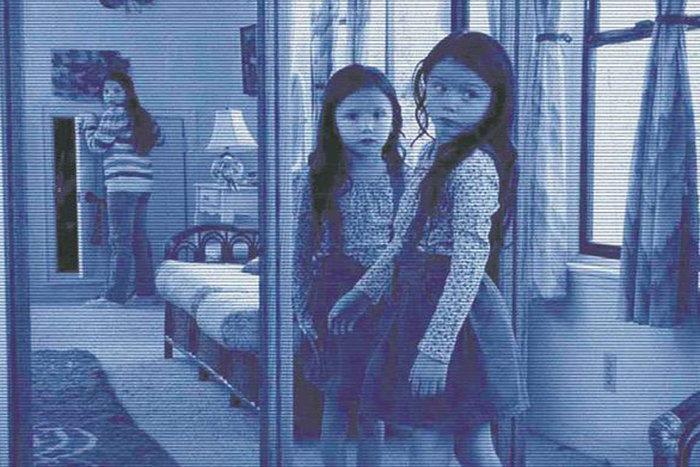