Sam Sutherland: Punk on the Page 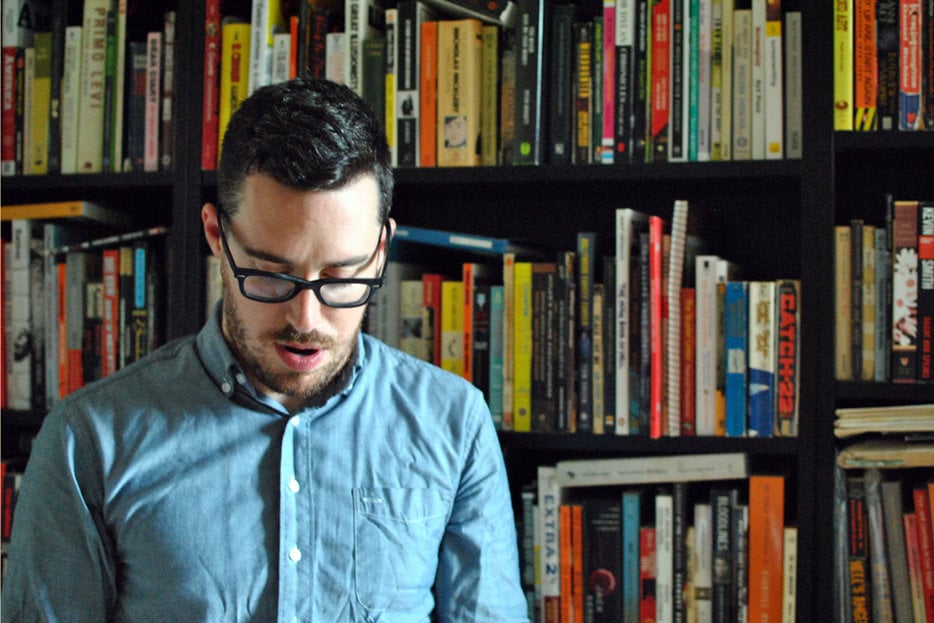 Shelf Esteem is a weekly measure of the books on the shelves of writers, editors, and other word lovers, as told to Emily M. Keeler. This week’s shelves belong to Sam Sutherland, a music journalist and the author of Perfect Youth: The Birth of Canadian Punk. I was supposed to go to his house and do this interview the night that the big storm hit Toronto, but my basement flooded, and instead I stayed home and bottomed out the house with the other people that live in the building. I went the next day instead. Sutherland’s building didn’t have power. We kept running from the bookshelf to the barbeque, which was out on a deck with a great view of Toronto’s southernmost slaughterhouse. Without electricity, it was the only way he could make dinner for himself and his girlfriend, Ashley.

We used to shoot a TV show at my old house that was basically just a fucking Wayne’s World rip-off, one of the first shows I ever did for AUX. That was when we were in a smaller place, and we had all of our books and CDs and records all in the same spot. They’re split up now, because there isn’t a good spot to have them all together, but it was just such a great thing.

I loved reading Mark Medley’s Shelf Esteem, where he said he and his wife hadn’t combined their collections. I thought that was really funny, because I remember what a big deal it was for us. I was like, Oh my god. This would be a hard thing to disconnect from itself. Once these are combined, that’s more commitment than I can fucking imagine.

It’s in alphabetical order, but in terms of subject matter? It’s a mess. The heartbreaking thing, I’m realizing right now, having you here to look at these books, is that so much has been loaned out. We’re sort of like the fucking party house for our friends, and what happens is people are like, Oh, can I borrow this? And you’re like, No problem, and in the end you lend out every good book you own, and you don’t even know who the fuck has it. 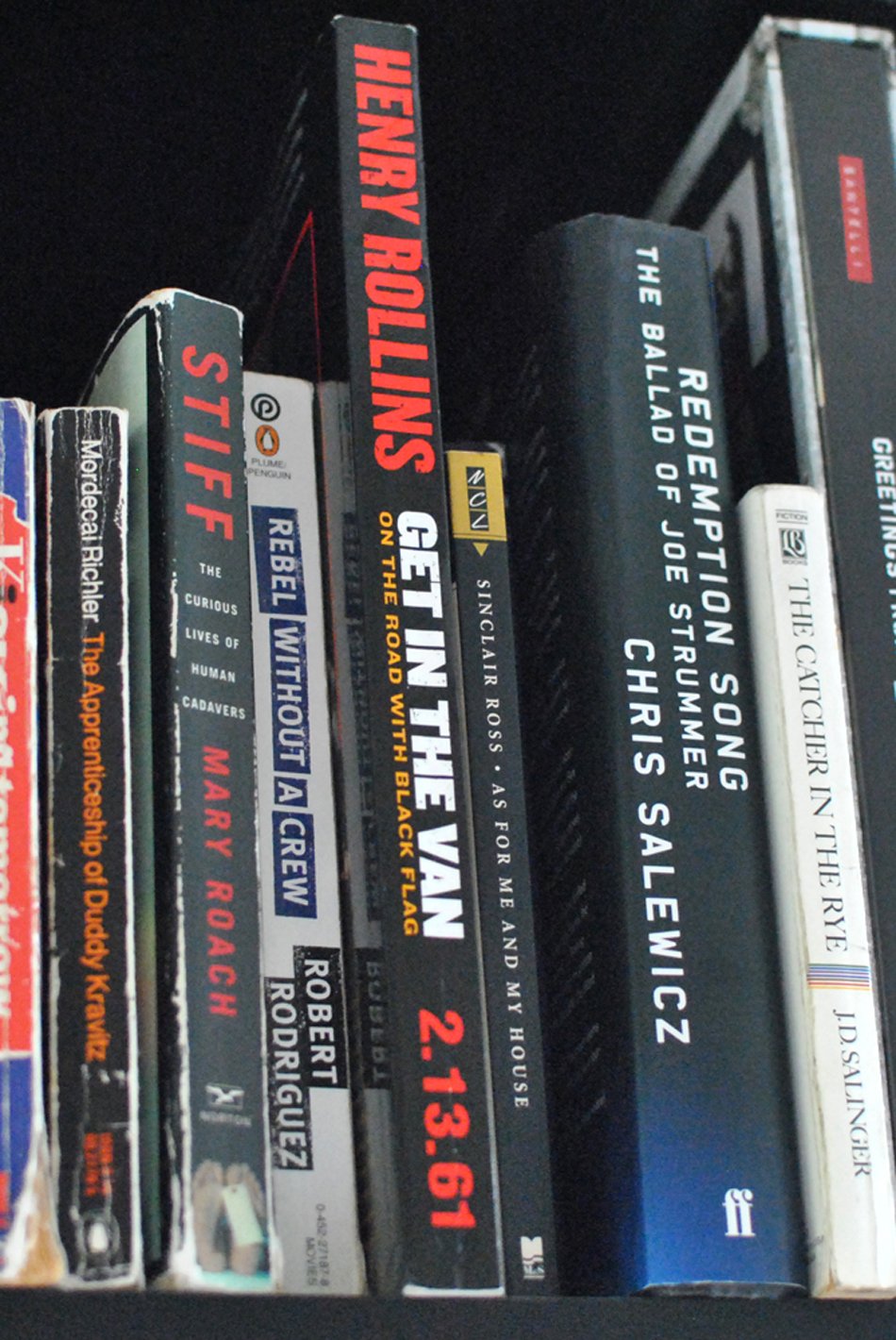 I have read Rollins’s Get in the Van a million times. I read it in high school, then I read it again when I was in college. And again as an adult. It’s the quintessential that book, you know? When you’re a kid, that’s how you learn what punk is supposed to be, the ethos of it.

I’ve also read the Making of Jurassic Park a lot. 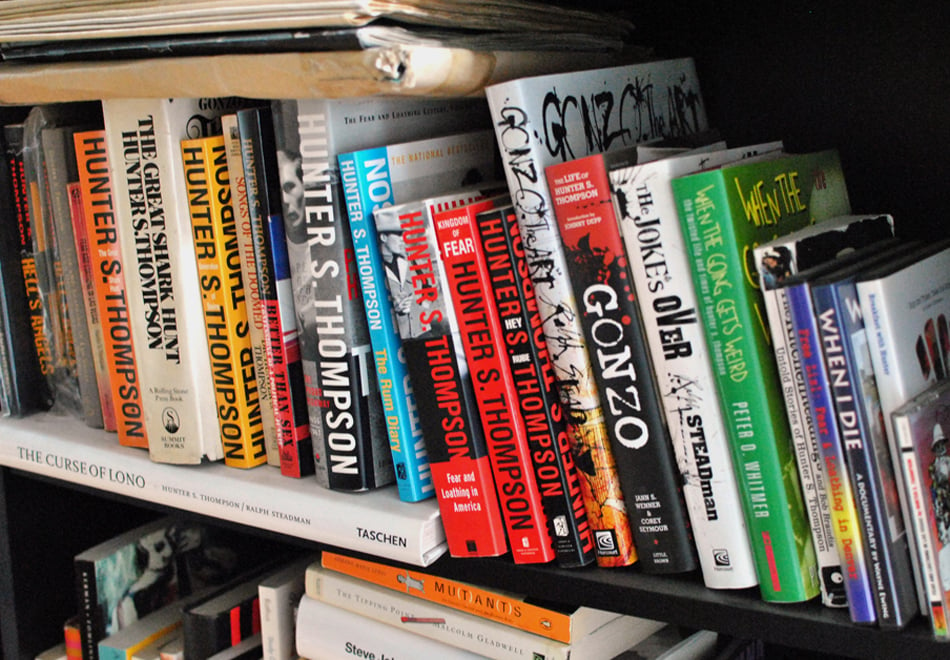 All this Thompson belongs to my girlfriend. She turned me onto him. I had kind of, well, not deliberately avoided him, but I never really got into it. Gonzo was kind of her high school obsession; it was one of those things. Actually, when I started reading it, after we’d started dating, I was like, Fuck, I wish this could be my thing. But it can’t be my thing, because it’s her thing! She’s got the Gonzo logo tattooed on her and shit.

She has this really cool thing, Fire in the Nuts. There were only a few of these, and the bookmark is a piece of the original artwork. That’s one where, if we ever fucking need money… But there’s all this shit, too. We have the Aspen Daily News from the week he died. The best thing about the Aspen Daily News is the motto: “If you don’t want it printed, don’t let it happen.” Which is by far the best newspaper motto you could imagine. 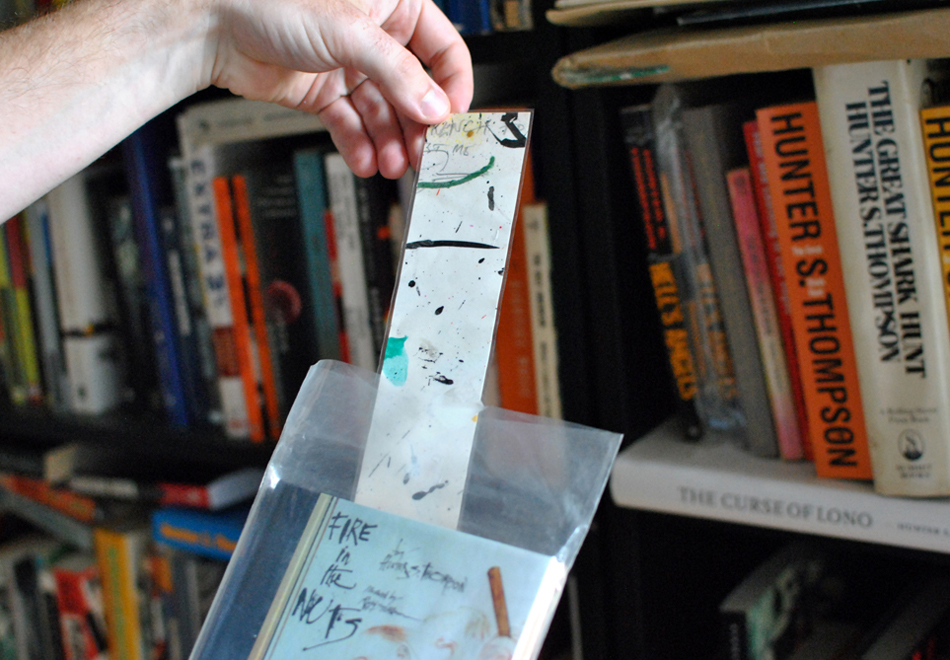 Me, I didn’t get obsessive about an individual author until I got older. When I was in high school and college it was usually just individual works, flitting between books and checking out the next thing. But over the last little while, it’s really been Norman Mailer, most of which I’ve leant out; there are only two here right now. But I’ve been obsessed with Norman Mailer for the last two years. That’s kind of been the thing I’ve been digging into and trying to learn something from. In particular, his non-fiction. I primarily read non-fiction, and I think because he did so many things—both in literature and in his life—I think it’s the perfect kind of non-fiction. It really reads with the power of fictional prose. Even though a lot of the stuff that I write is music journalism, I really am trying to create a feeling and a story that someone could immerse themselves in. Then, with something like Mailer’s Miami and the Siege of Chicago, he basically took dry political writing and remade it in the eyes of someone reading it in a very special way. 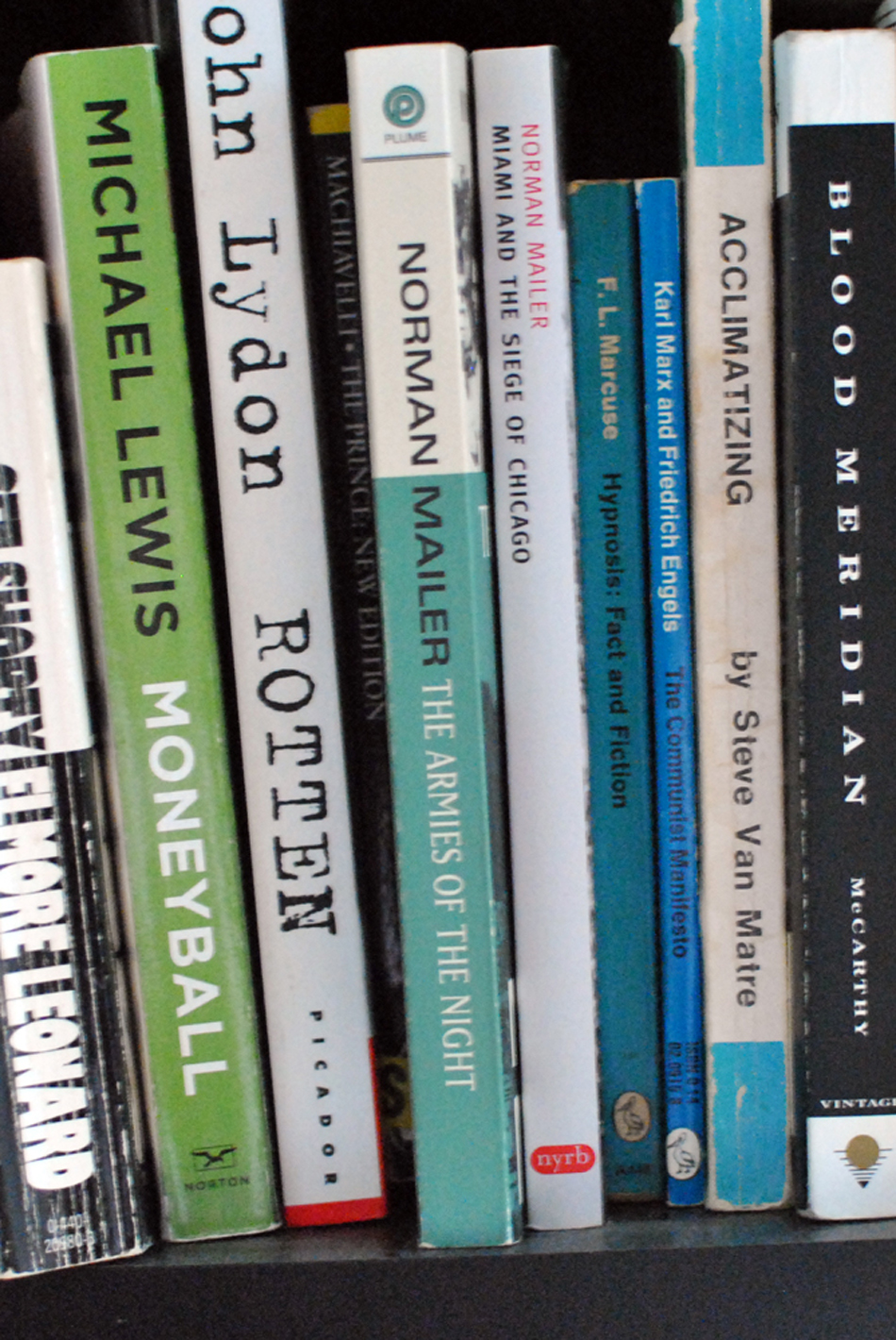 I love Chuck Klosterman. I know people have mixed feelings about him, but I think his writing is just… not necessarily what I would call music journalism, more memoir and different things through the lens of music. But I love Fargo Rock City. I think it’s a fucking fantastic book. But I think Klosterman writes more about himself than I would ever really want to. He’s super cool, he’s made a great living out of being Chuck Klosterman, and I respect that.

These down here are a bunch of books I used while I was writing Perfect Youth. And a bunch of library books I still owe money on, which is a big mistake. But Have Not Been the Same is the greatest book ever written about Canadian music. It’s just massive and exhaustive, and I think the template of a perfect, perfect book. It was huge for everything I did. 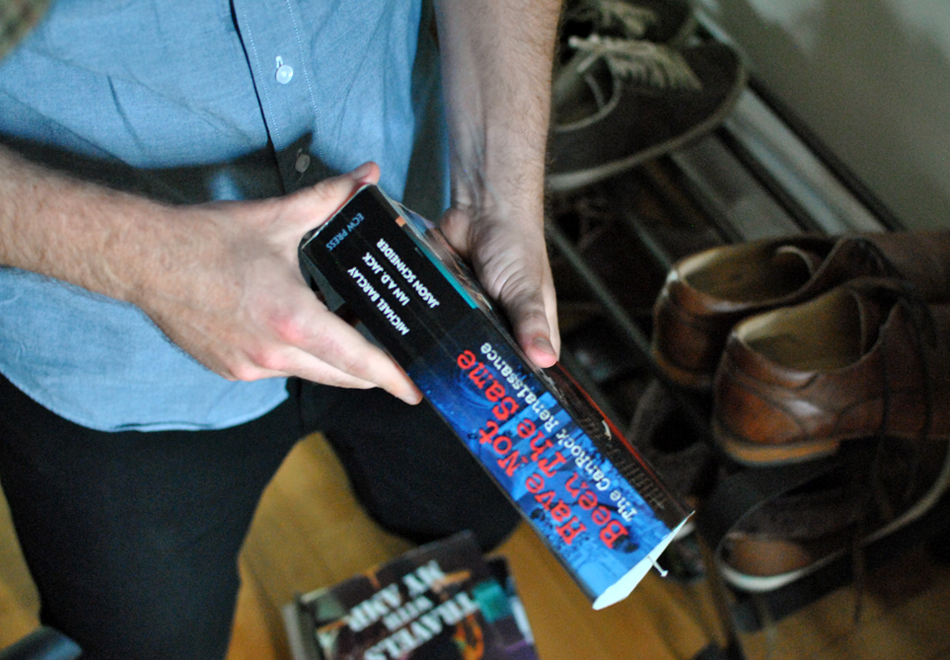 In my mind, punk music—or even music in general—is about other things. Sometimes it’s just about the music, but music writing, at its best, is a way to really talk about those other things. One of the things I wanted to talk about most was Canadian culture, Canadian identity. I was obviously interested in facts, in the bands that formed and broke up, but in extrapolating the larger idea, something that I discovered was that sports writing is actually a bigger version of that.

I decided that I hated sports when I was in high school, because sports are for jocks and I was like, We’re not jocks, we’re punks, so fuck that. But then I got older and less cynical about things. I got really obsessed with reading the great sports books. So many great writers… I mean, Norman Mailer’s obsessed with boxing, Hunter S. Thompson was obsessed with football. Sports is this incredible window for being able to discuss the biggest fucking fears and our hopes as society. David Halberstam is onto that something bigger. He writes very specifically about sports, but he manages to talk about basketball, this particular team, to this particular guy, and extrapolate it out to the whole fucking country. He’s the most perfect example of that. 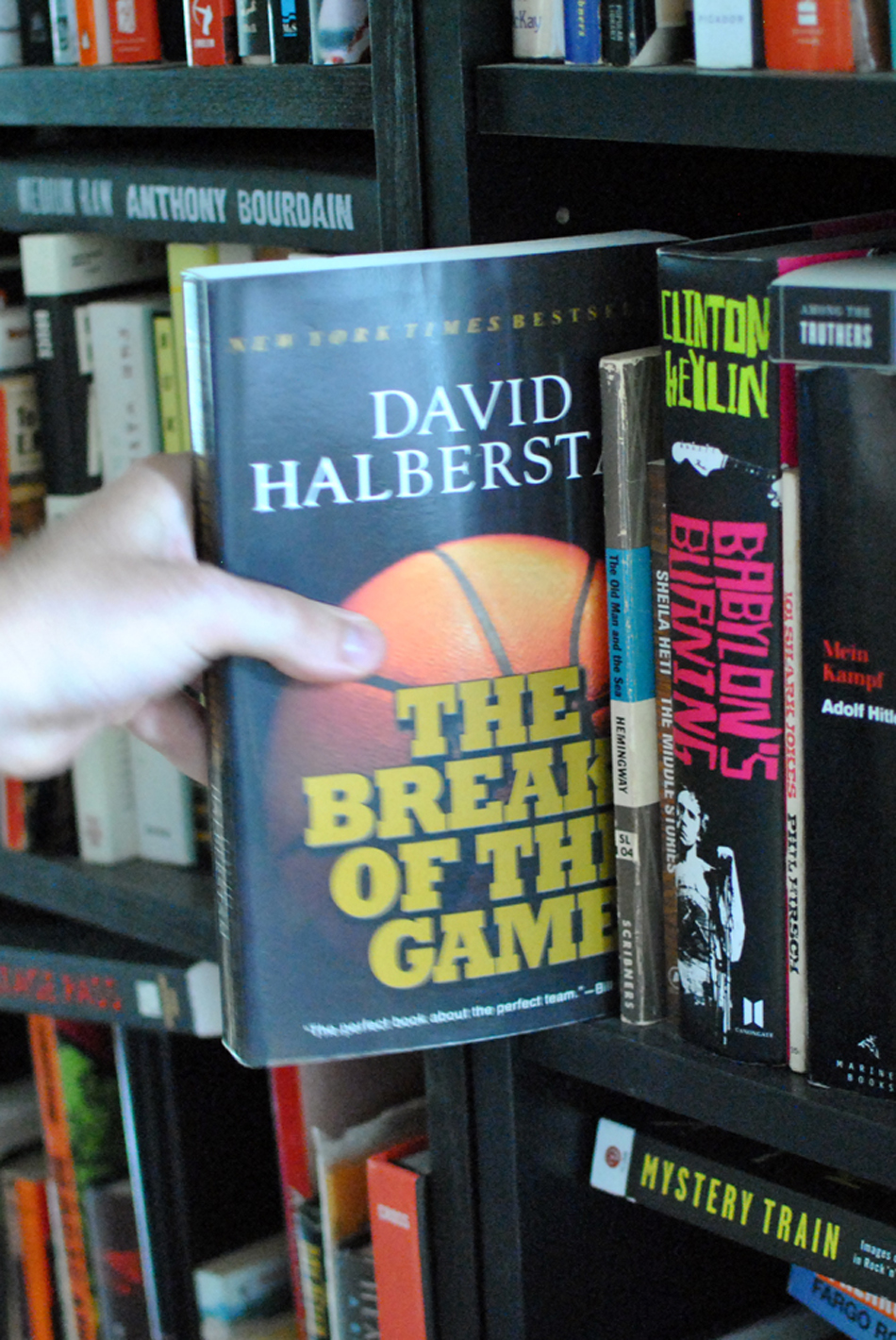 It’s pretty obvious what I’m into. It’s gone, because I leant it to somebody who was tattooing me once, but Dave Bidini’s On a Cold Road—I think Dave Bidini is a criminally, critically underrated Canadian author. I think that he writes about music and sports, which are integral to our national identity, better than anyone else currently writing. On a Cold Road was his first book, and I think it paints this crucial picture of what it’s like to be a band touring in Canada. It really identifies the Canadian rock and roll aesthetic, and that was super important to me, growing up. 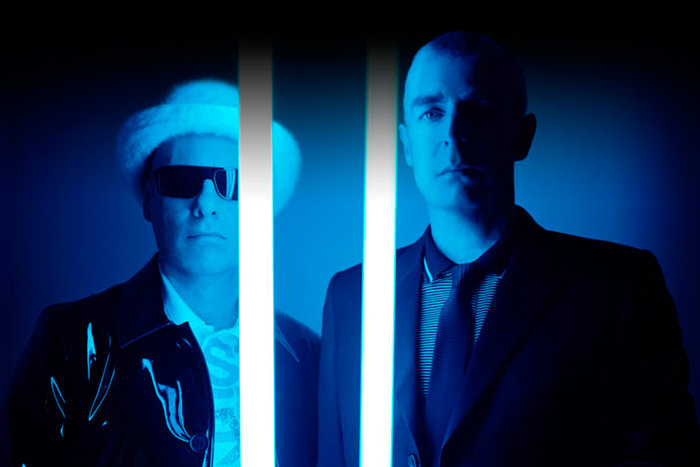 Culture
Pet Shop Boys: Every Single Single
Since 1984, Neil Tennant and Chris Lowe have released 53 singles as the Pet Shop Boys. In honour of their new album,…