Mexico: Land of the Japanese Peanut

Post-NAFTA snack culture in Mexico City meant locally made candy gave way to products pumped out by Nestlé. But cacahuates japoneses remain as popular as ever—distinctively Mexican, yet also a rare artifact of cultural diversity in a largely homogenous region. 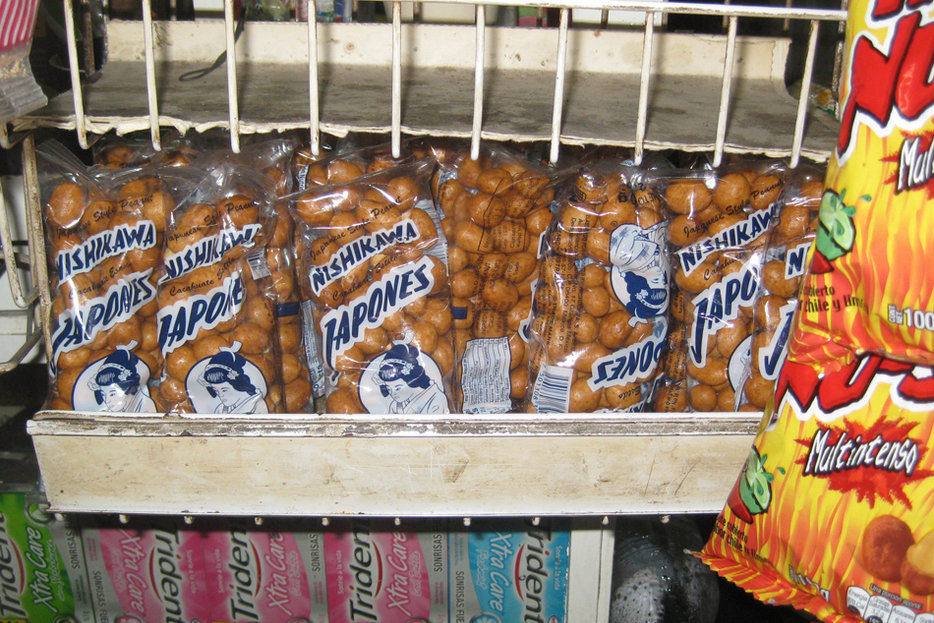 In 2011, Mexico produced 27,755 tons of something called Japanese peanuts. If you’ve spent even a small amount of time in or around this country’s mini marts, newspaper stands, supermarkets, or sports venues, this number may not surprise you. If you haven’t, then you might be wondering what the hell a Japanese peanut is and why there would be so many of them in Mexico. At least that’s what I found myself asking when I moved to Mexico City nine months ago.

Soon after I arrived, a friend and I went to buy some beer at an Oxxo convenience store. He picked up a clear little bag with blue and white writing and a geisha drawing on it. “Cacahuates japonéses,” he said. “They are fucking delicious.” And they were: crunchy and salty but somehow also mildly sweet. The flavor lingered in your mouth just long enough to make them addictive. (This is true all the time, but especially true when you’re drinking beer.) The texture was loud and toasty and perfect. The package only listed three ingredients: peanuts, wheat flour, and soy sauce.

Soon I was buying cacahuates japonés everywhere I went. The bags, nearly always blue and white, were easy to find. You’d see them piled up on shelves at any store that sold food. Usually it was the Nishikawa brand, which I tried that first night. But sometimes it was Samurai, Kiyakis, Nipon, Karate, or any other of a large number of varieties: all slightly different, all basically the same. The typefaces and design of the packaging of most japonéses do not suggest a particularly nuanced understanding of Japanese culture: bowed geisha heads are ubiquitous. The Karate bag features a fist aimed toward potential consumers. The Kiyakis brand bears a cartoony Japanese character (for flavor, I’m told) and the slogan “el cacahuate MUY japones”—the VERY Japanese peanut.

I landed here thinking I already knew a thing or two about Mexican food. After all, I had grown up in L.A.; I could tell tortas from tacos, carne asada from carnitas. But I’ve since come to believe that Mexico is, in many ways, an impossible place to understand—rules here only seem to exist for the sake of their exceptions. That might be why foreign writers tend to fall back on local experts and statistics when trying to explain the country. Deferring to some higher power like Octavio Paz or the National Institute of Statistics and Geography (responsible for the Japanese peanut totals above) makes it easy to shift the blame when a contradiction inevitably presents itself.

For example, despite everything Mexico City has to offer food-wise, it is also an unholy paradise of snacks and snackers. Subway station vendors offer chocolate bars and bags of Sabritas (Frito-Lay’s smiley faced Mexican offshoot) for mere pesos. The cool halogen lighting of Oxxo stores spills out onto a thousand sidewalks, beckoning customers to come and choose a vacuum-sealed pastry off a shelf overflowing with them. This city of 25 million—hub of world commerce, cultural epicenter of Latin America—is also a black hole sucking in mountains of hot dog-flavored potato chips and rushing caramel rivers of Coca-Cola. And then there are the Japanese peanuts.

The thing I found most confusing about Japanese peanuts was that other than their packaging and soy sauce coating, they didn’t seem very Japanese at all. They weren’t served in Japanese restaurants. Many of the people I saw eating them did so with lime juice and hot sauce. Some years ago, a writer for the newspaper El Universal addressed this question in a very succinct way: “The Japanese peanut is Mexican.” It was invented in Mexico City by Yoshigei Nakatani in 1945. So, yes, it is Mexican. But it is also Japanese.

Japanese immigration to Mexico began in the late 19th century as a cooperative venture between Emperor Meiji and Mexican president/dictator Porfirio Diaz. Early on, the Japanese settlers were mostly farmers trying their hand at growing coffee and other crops. A company called the Japan-Mexico Colonization Society recruited Japanese laborers to cross the Pacific and work on new coffee plantations in Chiapas, but many deserted when they encountered terrible working conditions; other Japanese immigrated on their own accord. Corporate immigration from Japan to Mexico ended in 1908, but free immigration continued up until the attack on Pearl Harbor, when Mexico cut diplomatic ties with Hirohito’s government. Echoing American policy, Mexico forcibly removed its residents of Japanese descent from territories near the Pacific Ocean and the United States border. They were sent to internment camps and to interior cities such as Guadalajara and Mexico City.

By the middle of the War, Mexico City’s Japanese residents new and old had regained a semblance of normality. According to historian Francis Peddie, the Mexican government became much less vigilant as the threat of an invasion diminished. Families lost their property and savings, but began to build new lives. Here we catch up with Yoshigei Nakatani, who immigrated from Japan to the coastal Mexican city of Manzanillo in 1932. There, he married a Mexican woman and converted to Catholicism. They named their first child Carlos. When the order came to leave the coast, Nakatani decided on Mexico City. He left his family in Manzanillo and settled in a Japanese neighborhood in the capital.

Sources conflict about when exactly Nakatani invented the peanut snack that would make him mildly famous. Some newspapers put it at 1945; others say 1951. But they agree that it all began in the La Merced Market, just east of Mexico City’s historic center. Nakatani made his peanuts in the morning and sold them in the afternoon under the brand name Nipon. For twenty years the operation continued that way at La Merced and the Central de Abastos, Mexico City’s huge wholesale market. Then, in the early 1970s, the family went industrial, opening its first factory. In the decades following, cacahuates japonés took off. Imitators—many with corporate distribution possibilities—overtook the Nakatani family as market leaders.

Snack culture in post-NAFTA Mexico City has changed fast. Movie theater concession stands that once stocked locally made chocolates and gummy candies now carry Nestlé products. McDonald’s and Burger King are not only everywhere but offer residential delivery service. You don’t even have to leave home to get your hands on a Big Mac. But cacahuates japoneses have stuck around, as popular as ever: distinctively Mexican, yet somehow simultaneously a rare artifact of cultural diversity in a city as homogeneous as they come.

Last week, I asked a friend of mine, a 49-year-old Mexico City native who owns a candy shop that sells cacahuates japoneses, about them. He nodded enthusiastically but also offered a stern warning about the peanuts.

“Yes, yes,” he said, “but only Nishikawa. The other brands are too hard.”

He was right, of course. No disrespect to Yoshigei Nakatani, but Nishikawa, the first brand I tried, offers the most delicious Japanese peanut. And from what I’ve seen around the country, Nishikawa accounts for at least half of those 27,555 tons. To get some idea of why that is, I called their headquarters and asked about the company history, its sales figures, its recipe—anything.

“We don’t talk about that stuff,” said the woman on the other side of the phone.

“None of it? Even if it could be good advertising for the company?” 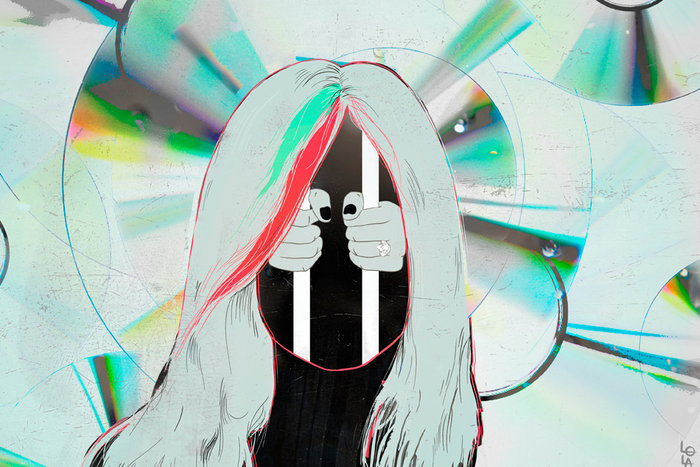 Tabloid Fiction
Avril Lavigne’s Disco Divorce
This is our eighth installment of Tabloid Fiction, in which an author chooses from the trashiest, most lurid, or just… 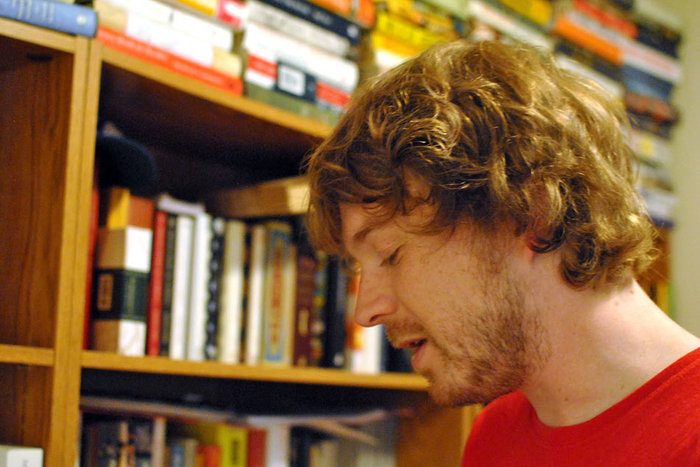