Getting Spied On With a Little Help From Our Friends

A new column viewing current events through culture: This week, Ian McEwan’s Atonement and Tim Hecker’s music listen in on the U.S-Germany and Canada-Brazil snooping scandals.

Events the past year or so have been such as to inspire a one-word revision of the classic opening of Robert Haas’s 1979 poem “Mediation at Lagunitas”: “All the new thinking is about surveillance,” it might go. “In this it resembles all the old thinking.”

Dave Eggers’ new (unevenly received) novel reportedly envisions a one-Facebook-redesign-away dystopia in which keeping anything private is regarded as selfish and subversive. Meanwhile Germany, Spain, France and other nations are furious at the United States’s National Security Administration for tapping the communications of millions of citizens of friendly states as well as their leaders, including German chancellor Angela Merkel’s cellphone. Reports differ about whether Barack Obama personally approved the bug on Merkel, but the “shocked, shocked“ response across the Atlantic certainly has taken the bloom off the rest of the world’s temporary smug amusement over Edward Snowden’s revelations, rousing nostalgia for the days when the kerfuffle was mostly about the U.S. spying on its own people.

In theory Canada would be able to keep chortling, because we are party to an agreement with the U.S., Britain, Australia and New Zealand not to surveil one another, although in practice that simply means our own spy agencies share all their information. But Canada has gotten itself in hot yerba maté with Brazil, with the news that our agents have been snooping around Brazil’s Ministry of Energy and Mines, presumably at the service of the resource-extraction companies who semi-officially run the country these days.

Amid the political maneuvering, though, these incidents do raise the question of the justifications and consequences of spying not only on one’s enemies but on one’s allies and friends, not to mention lovers. You’re a better person than I am if your life has never been fouled up because one partner or family member has succumbed to the temptation to read a diary or an email or a text or a Facebook page carelessly left open.

It’s difficult to know how much of the outrage about these incidents is sincere—maybe behind closed diplomatic doors they’re all having a weary laugh about the playacting they have to do for public consumption, all this staging of Grand Duchy of Fenwick-like fake wars. One French minister has been frank (and French) enough to say that of course everybody eavesdrops on everybody else, but the Europeans are simply “jealous” to find out that the Americans can conduct it on such a grand scale.

The suspicions that lead you there might be assuaged or confirmed, but other seeds of doubt can be planted, and worst of all (presuming you’re not caught) you can jump to half-informed conclusions and taint the groundwater of the relationship. On his sex-advice podcast recently, Dan Savage complained about how often he receives notes from people who during a visit have stumbled upon a relative’s adult playroom or dungeon and feel that they ought to say something, fretful that some “unhealthy” perversion is going on, even when the erotic arcade in question is one clearly co-enjoyed by the relative’s spouse.

As a well-established promoter of positive perversion, Savage said he’s taken aback that anyone even asks him these questions—have the letters been diverted from Ann Landers’ mailbag in the 1970s?—but went on to give the obvious answer (I’m paraphrasing): Try to forget you ever saw it! For god’s sake don’t say anything! And from now on when you come over, stay in the goddamn living and dining rooms where guests belong! Preserving good relationships can rely as much on what what we are careful not to find out as on the confidences we choose to share.

The theme puts me in mind of purloined or intercepted letters and other devices of melodrama, but particularly of Ian McEwan’s Atonement, in which a 1930s teenager too young and naïve to be filling the role of romantic go-between peeks at the wrong explicit piece of correspondence, becomes inappropriately alarmed and proceeds floridly and permanently to destroy the fabric of her family. She carries the guilt of the consequences for decades after, through her work as a nurse during the Second World War, which then becomes the central action of the saga.

The reader is left to wonder in what ways the disaster of war might parallel the disastrous chain of missteps that sundered this family, and less obscurely to contemplate the ways that broad traumas like war leave societies and individuals unable to atone for the more minute injustices that have been perpetrated along the way—either because such details get lost in the chaos or because there is no one left to apologize to. In that brutal light, the acts of international double-crossing in the news begin to seem less comical.

Still, the current brouhaha hinges not on envelopes conveyed between Edwardian drawing rooms but on high-tech software that scours vast arrays of wired and digitized communication. And that leads me to turn for illumination to a less plotty piece of work, the Montreal-based electronica artist Tim Hecker’s latest album, Virgins. Over the past decade, Hecker has become known for his massive moving walls of melodic drone, for his ability to entice and unsettle with mobile layers of sound. But Virgins marks a turn to a more spacious, interactive ambience, in part because he recorded its source material live with groups of friends, including the Reykjavik-centred Bedroom Community collective of musicians and composers.

That does not make it an entirely gentler record. The track “Live Room,” for instance, finds Hecker meddling with the performance in midstream, twisting its meanings and turning them violent, as if making the clean white room one pictures from the initial keyboard tinkling into an impassable minefield. Listening to it with McEwan’s Briony Tallis on my mind, I start to imagine Hecker pronouncing the album title with a disgusted snarl—”Virgins! They never know all the damage they do!”—as if the musicians themselves were the naifs his manipulations set out to expose. All the sounds seem to interrogate the improbability of communication ever being transparent, even between close friends and collaborators, rather than corrupting in the instant of its utterance. Listen up, NSA.

That’s not merely a fanciful reading. Yes, the song titles “Virginal I” and “Virginal II” suggest that some of the music might have been played on actual virginals (a harpsichord variant), just as Hecker’s killer 2011 album Ravedeath 1972 used the tones of a massive pipe organ in an Icelandic church. But the title “Incense at the Abu Ghraib” and the album-cover photo depicting a veiled object in a pose reminiscent of that Iraq torture prison hint that Hecker also might have in mind the “virgins” some Islamic martyrs are purportedly promised in the afterlife, and other associations of the past dozen years of terror and information wars. (He leaves unplumbed, so far, the link between drones and drones.)

Indeed the very first track, a prickly sun-bright drone that comes at you like a torpedo of broken glass, is “Prism”—the sort of light-and-colour-image title that, granted, is as commonplace in this kind of music as something like “Be My Baby” is for pop songs, but also the name of the very federal surveillance program that Ed Snowden’s leaks made notorious.

So let me make a modest proposal: Perhaps Canada and the other misbehaving spy countries can go back to their foreign friends and promise that they will continue their tapping and bugging, but have all the data processed, looped, diced and fried by Tim Hecker before they can review it, much as he’s done with his own allies here. The eavesdroppers will get to listen in, but won’t be able to pretend their intervention is blithe and benign; they’ll hear their own sickness, their self-interest, seeping in, eating like insect mandibles into the facades of their best intentions—always the last and toughest codes for anyone to crack. 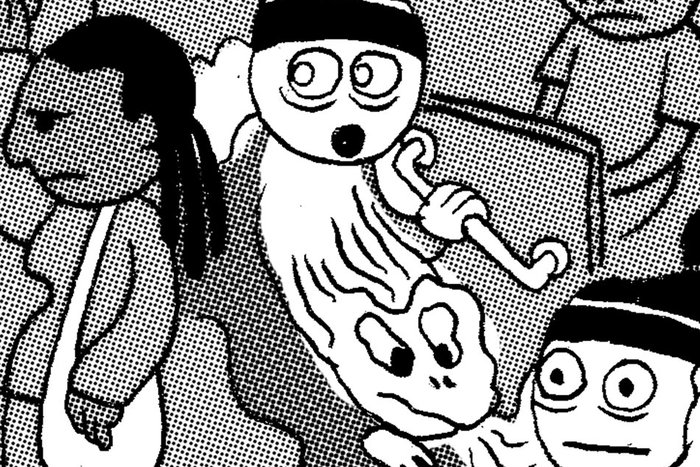 Comics
The Scene Report #14: The Slacker Episode
Wendy is the fictional narrative of a young woman living in an urban centre, whose dreams of contemporary art stardom…

Culture
We’re All Related to Genghis Khan: On Lou Reed

The Year in 5
Rosa Lyster
Against Recommendation
Navneet Alang