Every week Carl Wilson looks at the events of the past seven days in the mirror of art and culture. This week: The only one who could ever reach us was that sunuvabitch of a preacher man. (Or, The Rotten of the Patriarchs.) 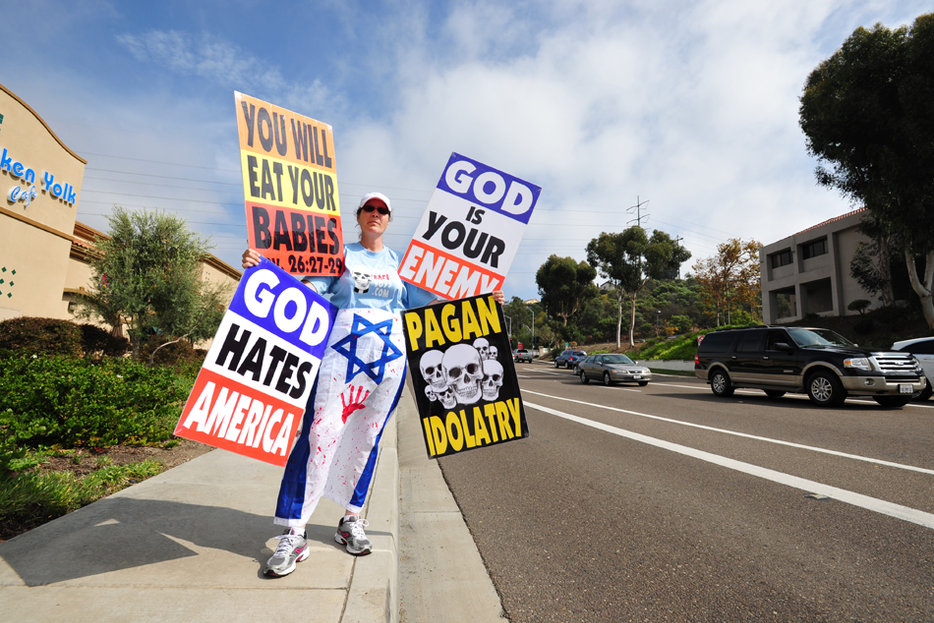 I am expectantly awaiting the NOW IT CAN BE TOLD! press release following the Rev. Fred Phelps’ death, which will announce that the entire 58-year existence of his Westboro Baptist Church has been an elaborate masterpiece of interactive performance art.

Consider the multi-generational communal houses of pasty heartland hysterical fanatics. Think of the small children holding multicolored GOD HATES FAGS placards. Listen to the babbling faithful telling journalists that they celebrate every American death, whether by war or traffic accident, as a victory for God in His obsessive quest to punish those who have tolerated the existence of sodomites (and, oh yeah, Jews)—their justification for picketing at the funerals of U.S. soldiers. Look at their rough-cut DIY video collages and pop-music parodies. Could there be a better surrealist hoax?

Caricatured corrupt preachers of course have been a staple of western and especially American vanguard art and socially critical pop culture at least since the puritan Rev. Arthur Dimmesdale’s stiff-of-dick-and-dogma portrayal in Nathaniel Hawthorne’s 1850 The Scarlet Letter.

What, after all, would have become of the entire corpus (and I use the word advisedly) of late-20th-century punk rock, heavy metal and photocopied DIY zine culture without greedy televangelists, anti-women religious-right moralists, and closeted homophobic fundies? Allow Jello Biafra to represent this wing, a privilege he’s damn well earned.

Then there are the greats such as the lecherous monks and clerics of Chaucer and Shakespeare and their heirs in blasphemous pornography through the millennia; Sinclair Lewis’s drunken, womanizing sermonizer Elmer Gantry; the flawed but struggling “whiskey priests” of Graham Greene; and at the extreme end, Robert Mitchum as the violent itinerant churchman with LOVE and HATE tattooed on his fists in 1955’s Night of the Hunter.

Then there are all the sinister ministers of genre fiction and films, such as Nathan Fillon as Caleb in the final season of Buffy the Vampire Slayer. A defrocked serial-killing man of the cloth, Caleb’s Southern-drawling serpentine deadliness and alliance with the “First Evil” ultimately leads to a reshuffling of the whole ancient balance of forces in the show’s ambivalently secular-spiritual cosmology.

It’s telling that the obvious liberal humanist Joss Whedon has proved helpless to resist weaving religious metaphysics into his plots. Buffy Season 6 revealed that in the face of characters’ deaths, the makers of even this smart-aleck-feminist-teen-action-drama couldn’t bring themselves to imagine there’s no heaven.

I think there’s a clue there to why we’re so drawn to tales of perfidious and perverse padres. First, against all our better reason, there is a creeping fear that the Bible thumpers might be right and we’re headed to the fiery pits. More insidiously, though, there’s the chilliness of the more level-headed worldview that there is no ultimate reward for all our suffering other than the passing joys of mutual affection and getting a few decades to touch willow trees, read Patricia Highsmith novels, and listen to the Wu-Tang Clan.

In the WBC’s temple of Dada, everything is God’s punishment for homosexuality.

Which is pretty fucking good, really. But in our more ungrateful moments, we resent knowing there are far more comforting stories available from every eternal-life-promising, social-hierarchy-justifying religion on the planet—beliefs most of us accepted in some interlude of our lives, but found untenable. And this psychology applies not only to heathens, I suspect, but to adults of good faith, for whom the ratios of devotion to doubt might be reversed but still settle leagues from any longed-for state of certainty.

Either way, we want to lash back against our attraction/submission to the pushers of solace. So we flip the polarities on their own Manichean dynamics and make these shepherds out to be lamb-slaughtering wolves. There’s plenty of supporting evidence: never mind the Inquisition, here’s the residential-school system. But a lot of the artistic renditions veer quickly away from the horrible-enough banality of evil to the cartoon-supervillain, secret-Satanist, holy con man.

Thus the brilliance of Fred Phelps, metafictional conceptual artist, who finally made flesh of these fantasies, and through his theatre of the absurd rendered all others redundant. Not for him the commonplace of the railer against fornication who is then caught secretly rogering twink hustlers in cheap motels. Nor would he stop at “hating the sin and loving the sinner,” boasting of his love for America while calling the current President the Anti-Christ, or saying that AIDS is God’s punishment for homosexuality.

No, in the WBC’s temple of Dada, everything is God’s punishment for homosexuality, and forget about the reassuring pledges of repentance and ascension—it’s much too late for all that. God hates America! God hates the world! You will eat your children!

God Hates The World? - Sick Parody of We Are The World

As comedian Patton Oswalt put it seven years ago in SPIN magazine, “Is there anything more punk rock[?] … I’ve never seen the anarchic spirit, the DIY ethos, or the hardcore antisocial stance in more robust action than in this braying, backwoods mini-opera. … Besides the hothouse-raised hate-vixens, the folksy righteousness, and the handheld energy of the video, it’s the ballsy attitude.”

Consider the fishy background detail that before his transformation into a Lego action figure constructed from neon bricks of carcinogenic misanthropy (did I mention the WBC’s God loves cancer? He loves cancer), Fred Phelps in the 1950s was a crusading civil-rights lawyer, one of the few who would defend African-American freedoms in racist Kansas.

Now, you could take that to indicate he was always a monomaniacal obsessive who would pick a fight wherever he could find a contrarian cause. Or you could pick up the dog whistle that he was a secret lefty who despaired of official channels and decided to subvert the reactionaries from within via satire-played-straight. (I figure he had covert planning meetings on this mission with Mel Gibson.)

Need more? What’s with the reports that shortly before his death Phelps himself was excommunicated from the church (what a plot twist!) and that among the new leadership is one Steve Drain (his punk-rock name, surely), who arrived at the WBC as a filmmaker planning to make a documentary about it called Hatemongers, but then was converted? Sure, if by converted you mean convinced to become a collaborator in the much superior work of agit-prop the Westboro détournement squad already had on the go.

Watch this footage of Drain in Louis Theroux’s second BBC documentary about “the most hated family in America” and deny that these pranksters are staging a farce that out-Borats Borat. The whole clip is worth viewing but the Drain segment begins at 6:28; it enriches this text to know that Theroux is often (mistakenly) reputed to be Jewish.

The real question becomes whether the multimedia installation Phelps made of his life achieved its goals. Aesthetically it must be counted as a triumph; socially its legacy is more ambiguous. You could certainly argue that he succeeded in throwing homophobia into its worst light and helped unite decent people in revulsion, a case best made by the WBC’s fellow-travelling satirical institution The Onion with its obituary, “Fred Phelps, Man Who Forever Stopped March Of Gay Rights, Dead At 84.”

Or else Phelps’ effect might have been to make less-psychotic figures of intolerance appear relatively reasonable. Without the genocidal rantings of the WBC and others, mightn’t we be less easily seduced when the man who now heads the Catholic Church allows that, while homosexuals are still committing mortal sin, it would be un-Christian of him to cast stones, and that maybe same-sex civil unions would be acceptable as an alternative to profaning the holy sacrament of matrimony—you know, separate but equal?

As Dan Savage pointed out on one of his recent podcasts, this is the losing side trying to name the terms of its own defeat: Perhaps before the majority of the western world woke up to the justice of true equality, queer people would have embraced civil union as a decent temporary compromise. The Catholic Church fought that idea serpent’s tooth and crucifixion nail. Now it’s offering to rewind three decades back and call it progress. It may be only the spectre of Phelps-like loathing that gives that nonsense any cred.

That is what is at stake in deciding if the WBC’s grand guignol should be granted further visibility. Lots of groups debated this week whether to mock and picket Phelps’ funeral, as he would have done to them, or to rise above and ignore it. It turns out that there will be no funeral because the WBC does not believe in “worshipping the dead.” (Or because Phelps’ death is another fake-out?) However, so far—perhaps because the factions are debating which theorists of mimesis to cite in the big reveal—it goes on with its demos.

Whether Phelps was a stealth genius of art-into-reality, a pathetic deluded sociopath, or both, the most acute note was sounded by counter-protestors at the WBC’s picket of this week’s Lorde show in Kansas City. They held a banner that simply said, with defiant dignity: “SORRY FOR YOUR LOSS.” As it was in the beginning and ever shall be, amen. 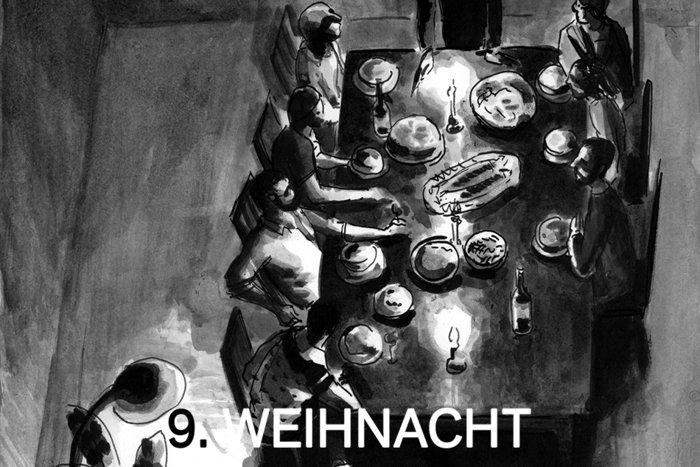 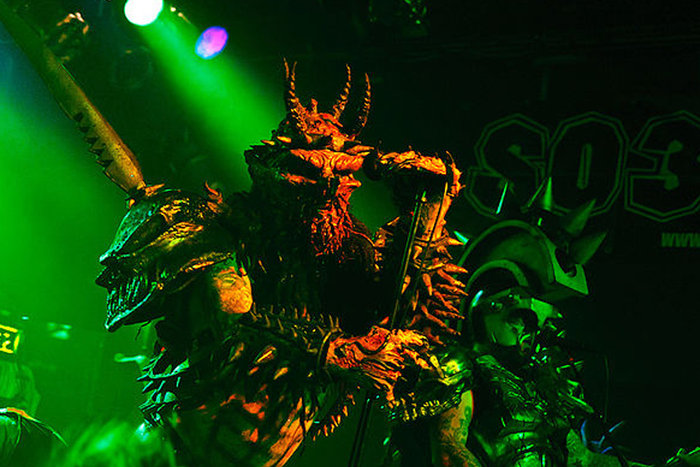 New Tabs
Terrible Ledes, the Names of the Year, and the Death of Oderus