If Toronto were a different city and Canada were a different country, you could almost imagine people feeling sorry for the Big Smoke. Calgary just re-elected its philosopher-king by a margin that you’d normally associate with the electoral process in Zimbabwe; Edmonton’s new mayor is 34 (you may commence feeling inadequate) and did almost as well. Meanwhile, the mayor of Toronto is rounding out the latter half of his term of office denying that a video exists of him smoking crack, and breaking up that fun by writing character references for violent criminals.

Bonus: Rob Ford used office stationery, so if you live in Toronto, the mayor has no problem using your good-until-recently name to do his buddies, including convicted murderers, a solid. Ford, of course, is on the record as believing that violent criminals are best locked up or expelled from Canada—unless, of course, they’re close personal friends. In that case, they should just get lots of time around schoolchildren.

For the record, I strongly suspect this kind of thing is why Ford voters love the man, and we’ve got no reason to believe that these latest revelations will shake his support in the polls.

But the contrasts between Toronto and Calgary have long since been played out, as it’s been three years since October 2010 saw Naheed Nenshi and Ford elected within a few weeks of each other. But beneath the surface of the freak show, there’s a more fundamental problem. Rob Ford has inarguably been good for getting voters to pay attention to Toronto City Hall. It’s far less clear that attention is actually doing any good.

It would be one thing if Toronto were humming along nicely with no major municipal problems to confront, but it’s not. The city is increasingly unequal, pushing minorities and the poor (but I repeat myself) to the suburban periphery. There, postwar planners assumed poverty could never invade blocks of quarter-acre lots and two-car garages, so the contemporary poor don’t have the services they need. Even for the middle class, the basic cost of renting or buying is moving out of reach. Transit is shuddering to a halt, and the “solution” adopted by all three levels of government (a subway to Scarborough) will only make things worse (by further overcrowding the already-dangerous Bloor-Yonge interchange), if it even comes to pass at all.

Rob Ford’s (and Kathleen Wynne’s, and Stephen Harper’s) Toronto: where we burn $3 billion on a new subway and the best-case scenario might be if nobody actually rides the damn thing.

That Rob Ford has no solutions for any of these issues is par for the course. But after three years of his tenure, it’s not clear the opposition has a program besides “not being Rob Ford,” either. And while that may yet be enough to win an election next year, that’s a problem. This city has serious issues to deal with, and if the next mayor’s mandate amounts to being the not-Ford, what exactly will she have a mandate to change?

Of course, that’s exactly the question an election campaign is supposed to answer. It is, without question, too early to worry. But Ford’s opposition better have more than just the status quo ante as a campaign platform, because having learned nothing and forgotten nothing may not actually make the sale with voters—who elected Ford in the first place for a reason.

Society
I Don’t Have To Defend My Sexy Hamburger Costume 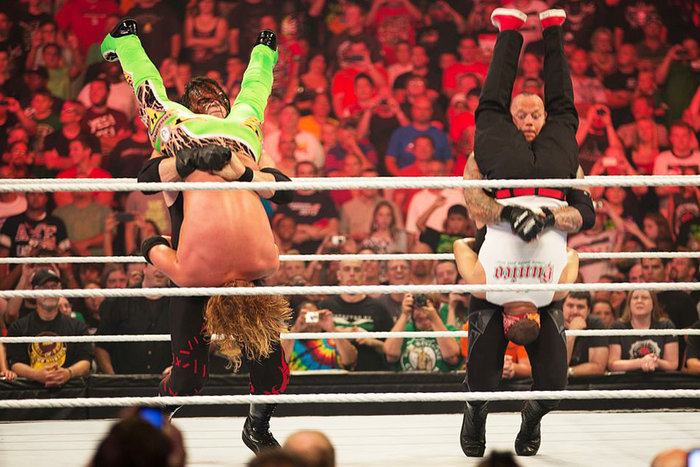 Sports
What About the Wrestlers Who Didn’t Die?
Pro wrestlers wreck their bodies, ruin their careers, die far ahead of schedule, and David Shoemaker draws from a rich…