What About the Wrestlers Who Didn’t Die?

Pro wrestlers wreck their bodies, ruin their careers, die far ahead of schedule, and David Shoemaker draws from a rich well of their stories in his new book, The Squared Circle. Here are some, however, who improbably, defiantly made it out alive.

Tom Breihan is the senior editor of... 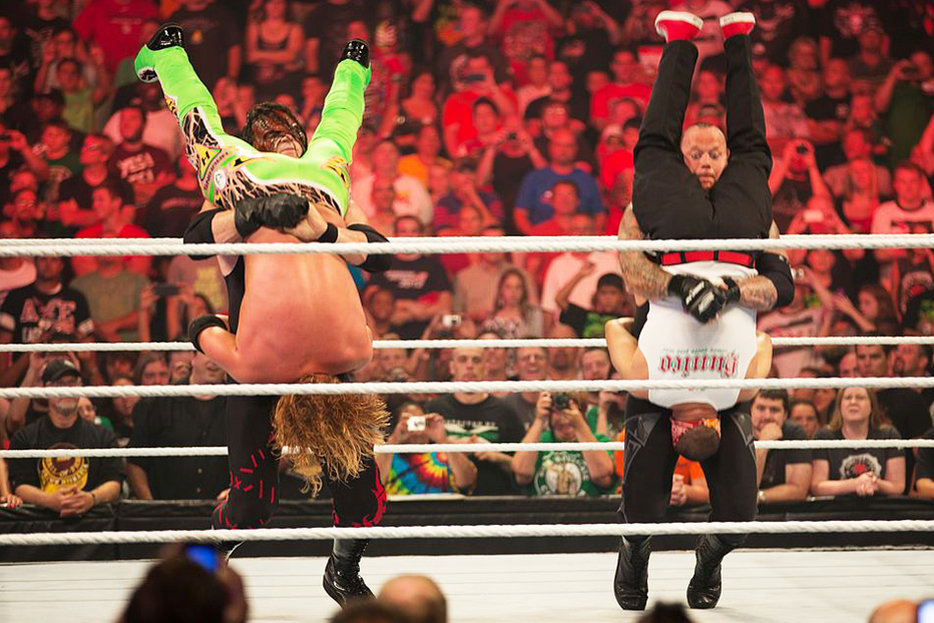 Image by Xander Hieken via Wikimedia

Shortly before he turned 30, Jerome Young, a bounty collector and part-time drug dealer from North Carolina, decided to become a professional wrestler. Young called himself New Jack, and he played a black-militant bad guy, practically causing riots throughout Southern wrestling promotions. (The Smoky Mountain Wrestling moment where he thanked OJ Simpson is a minor time-capsule classic.) Gradually, his persona warped into an all-purpose stereotypical urban-camo gangster, and his wrestling style just warped, period.

After a mid-’90s move to the Philadelphia-based company Extreme Championship Wrestling (ECW), New Jack’s bloody brawling reached full flower. Never a technically skilled wrestler, New Jack always specialized in sneaky stuff: brass knuckles, steel chairs. In ECW, where the fake rules of pro wrestling didn’t apply, he pushed that strategy to baroque levels: staple guns, cookie sheets, entire garbage cans full of makeshift weapons dragged behind him to the ring. My favorite: He’d pick up an acoustic guitar, do a weird country-singer two-step strum thing, and then mash it over someone’s head. His entrance music (Dr. Dre and Ice Cube’s “Natural Born Killaz”) wouldn’t just play on his trip to the ring, it would blare on a continuous loop—a serrated audio assault to match the physical stuff he was doing.

New Jack always seemed violently unhinged, and this was not simply an affected persona. He’d climb to venue balconies only to dive off on prone opponents; he’s since revealed that he’d usually keep a hidden cocaine stash for use during matches, just before those balcony dives. More than once, he’s come awfully close to killing his opponents, and it hasn’t always been by accident. In his prime, he willfully became the human personification of wrestling fans’ bloodlust, pushing that impulse into actual mania. Now, he’s something else: a happy memory of bloodier times, a living reminder of an era before the World Wrestling Entertainment (WWE) corporate giant pushed its scrappier and darker competition out of business. Mostly, people are just amazed that he’s still alive.

Scott Rechsteiner was a massively muscled collegiate wrestler, a Division I All-American at the University of Michigan. Collegiate wrestling and the ribald and openly absurd pro stuff couldn’t be more different, but Scott and his brother Rick, another collegiate great, both crossed over to the latter. Where they’d once learned to scientifically twist fellow young scholars into pretzels, the two Rechsteiner brothers now figured out how to flex and preen and bark and pretend-flatten other young muscleheads. And they excelled at that, too. The Rechsteiner brothers became the Steiner Brothers, an absolutely badass bruiser team whose attacks looked realer than anything we were used to seeing. They seemed to operate at a different speed than their competition, moving with agility and ferocity new to pro wrestling. They looked bigger and tougher than just about everyone they fought—this, even though ‘80s pro wrestling was entirely built on guys looking big and tough.

They bounced around among companies—World Championship Wrestling (WCW), WWF, ECW, Japan—before eventually settling down in WCW, where Scott finally realized his destiny as a yammering inflated crazy-man warrior-king. Eventually, the already-gigantic Scott became even huger—scarily huge, huge to the point where the muscles of his muscles had muscles. He’d flex one arm, and it would keep expanding, popping out new veins and orbs and sinew-masses where those things really shouldn’t have been appearing. Rick was sidelined with injuries more and more often, so Scott struck out on his own, bleaching his mustache for some reason and joining the crowded and villainous New World Order (NWO) faction, where he palled around with insufferable cackling goon Buff Bagwell.

Even as the NWO storyline shorted out, the scarily muscled Steiner thrived, becoming the company’s dominant bad guy. He’d come to the ring in a chain-mail headdress, mangling Master P catchphrases in a loud Hetfieldian growl, and he was mesmerizing. Steiner’s career could’ve ended, the way many did, after WCW folded, especially since he was a certifiable madman with a history of going off-script on live TV and attacking innocent bystanders. But Steiner persevered, sticking around in the upstart Total Nonstop Action (TNA) wrestling company longer than anyone could’ve expected. His grizzled linguistic foibles became the stuff of YouTube legend. And he’s still kicking around independent promotions, standing as wrestling’s human id, the living symbol for its hypermasculine lunatic fringe.

Dalip Singh Rana was born poor in India, and he worked, variously, as a roadside laborer, a security guard, and a police officer. He must’ve been a sight: Rana suffers from acromegaly, a pituitary disorder similar to gigantism. He grew to more than seven feet tall, great of chest and jaw, and eventually learned that giants can often find a place in the ongoing sideshow universe of professional wrestling. He got his training with a small New Jersey company, where he once accidentally killed a guy during a match (or, rather, the guy died after a couple of back-to-back concussions; it wasn’t necessarily Rana’s fault). In 2006, he joined the WWE and became the Great Khali, a monstrous foil to the veteran supernatural hero the Undertaker.

Khali started out his WWE career as an unstoppable behemoth, but then people started stopping him. Once Khali began losing matches, his mystique disappeared. Fans had already noticed that he could barely walk, let alone execute all the complex gymnastic choreography that a good wrestling match requires. And so he became a comedy figure, a dancing buffoon, a punchline whenever a punchline was needed. A few years into his run, he became the wrestler who exists to get beaten, the go-to guy whenever another wrestler needed to demonstrate impressive strength by lifting someone. He’s still there in the company, the tag-team partner of a dwarf wrestler named Hornswoggle. There, he serves as a living connector to pro wrestling’s circus-sideshow roots, and a reminder of what happens when a monster stops being a monster and sticks around long enough to become an embarrassing, goofy human being.

New Jack, Steiner, and Khali aren’t among the figures to whom David Shoemaker pays tribute in his new book, The Squared Circle: Life, Death And Professional Wrestling. In fact, the book barely mentions Steiner, and I don’t think New Jack or Khali appear in it at all. There’s a reason for that: all three are, against some odds, alive. Shoemaker wrote Deadspin’s great Dead Wrestler of the Week column (revised reprints of which comprise much of the book), and currently writes and podcasts about current wrestling goings-on for Grantland. He thinks in mythic terms, and his book works as a collection of stories of gone-too-soon grapplers, each painted in grand narrative brushstrokes because, after all, they’re over now. Taken altogether, though, the accounts form an epic treasury of this glorious, ridiculous fake-sporting façade.

In the book’s earliest chapters, Shoemaker draws out wrestling’s early history as a circus-sideshow attraction run by carny criminals, populated by characters like Ed “Strangler” Lewis and “Russian Lion” George Hackenschmidt. His passion, though, is clearly the varying levels of reality—the play of truth and fiction—present in every wrestling match. Shoemaker claims that even in the form’s earliest days, when wrestlers went to great pains to protect their fiction and keep its workings secret, fans already had a good idea this was a show. Over the years, the business interests behind wrestling have become more and more open about the fakery of it all, but wrestlers still get hurt, still wreck their bodies, still die young. Even at its most bogus, pro wrestling is still as real as a broken bone or a ruined career.

Writing about the lives of these fallen wrestlers, Shoemaker is all empathy and nostalgia. Whether it’s a transcendent star like “Macho Man” Randy Savage, a cult hero like Bruiser Brody, or a relatively insignificant figure like Special Delivery Jones, the stories resonate. But Shoemaker is a wrestling historian, and, accordingly, traffics in rumor and myth wherever he can: Samuel Beckett giving a young Andre the Giant rides to school; the Road Warriors inventing and popularizing Zubaz workout pants; Captain Lou Albano helping to ease pro wrestling into the mainstream and changing it forever after meeting Cyndi Lauper on a flight to Puerto Rico. Some of Shoemaker’s subjects lived in 72-point headlines, others hid in the margins, but in death, he finds endings for all of their stories.

Shoemaker, bless him, is a print-the-legend type. He likes to write about fallen wrestlers as tragic heroes, mythical creatures who once walked the earth, and he’s great at it. But there’s an improbable squalid grandeur, too, in the lives of the guys who insist on living. Professional wrestling is a deeply strange activity to build your life around, and everyone who’s made a go of it has a fascinating story to tell. The Squared Circle is a rich, captivating book, but don’t mistake it for the final word. There’s a whole lot more absurd, still-breathing pageantry where those stories came from—it’s just a shame that the dead provide such a deep reserve from which to draw.

Tom Breihan is the senior editor of Stereogum, and he’s written for GQ, Grantland, Pitchfork, Men’s Health, and others. He also writes about wrestling sometimes for the Classical. He lives in Charlottesville and tweets @tombreihan.

Culture
The Only Thing Worse Than Bad Memories: Playing and Reading Thomas M. Disch’s Amnesia
Video game scripts have come a long way, but few still boast authors as acclaimed as Disch, whose 1986 adventure is…