The Year in Dogs

As grief shaped daily life over the past three years, one of the few things that has reliably brought me comfort  is helping my dog be brave.

Nicole Pasulka writes about gender, activism, and criminal justice for publications such as New... 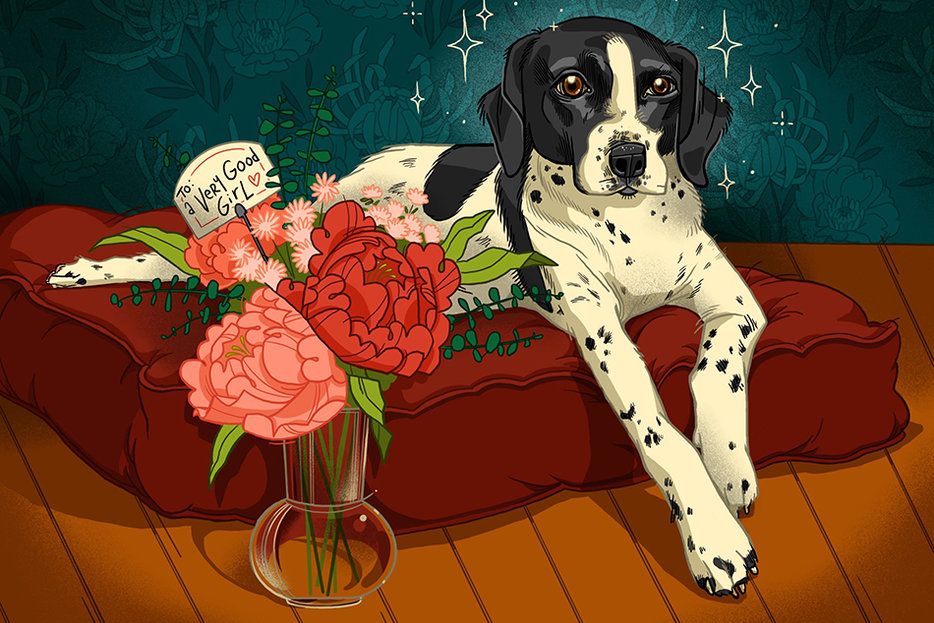 What were we obsessed with, invested in, and beset by in 2022? Hazlitt’s writers reflect on the issues, big and small. Keep up with this year’s series here.

Oh, dogs. Walk outside your house and they are literally everywhere. Lurking at intersections as their owners wait for the traffic lights to change. Sniffing tree trunks and potted plants. Peeing on garbage cans. Over tens of thousands of years, humans have designed these hedonistic neurotics to bark, whine, jump, and trot around on our streets and in our parks.

Over the past year, I have become acutely aware of the location, activity, and temperament of all these dogs, because my own—a three-and-a-half-year-old hound-collie mix named Veronica—believes with the faith and certainty of a “Karen” reporting a suspicious man outside her home that she is responsible for collecting, corralling, and chiding every dog within smelling distance. During this time, she, my long-suffering long-term partner Paul, and I have been engaged in a behaviour-modification campaign designed to help her not do the very thing she believes it is her life’s purpose to do. Tell a bird not to fly, a cow not to graze, or a cop not to write you a speeding ticket—this is what it’s like to ask Veronica not to bark at dogs on the street.

The bark is not mean, unless of course a dog dares to appear without warning. There has never been—knock on all wood—a bite, not even when that territorial shih tzu on Fawn Street broke away from its owner and chased us off the block with a shrill, honestly quite aggressive, warning. Ronnie’s bark is, however, deafening, and while I know she will always have a voice in her, I would like to preserve what little hearing I have left. This bark is the adaptive response of a smart but nervous dog who sees, hears, and smells too much and—due to breeding, unknown but likely trauma, and the frustration of living in a loud, crowded city—is vaguely scared of strange men, falling leaves, loud trucks, her reflection in certain mirrors, and anything that dares to move erratically or suddenly in her peripheral vision.

As helplessness, loss, and grief shaped daily life over the past three years, one of the few things that has reliably brought me comfort and satisfaction is helping my dog be more confident, braver, and just a little bit quieter in this increasingly chaotic world.

Veronica is not my first troubled dog, nor is this the first gargantuan behavioural hurdle of hers we have climbed. When I first adopted her, she was incapable of staying at home alone without having a panic attack. It was heartbreaking to hear her incessant barking turn to plaintive shrieks and yelps, to see her standing at the upstairs window afraid we’d left her forever. Her angst had to stop and at first the only surefire way to control it was to never, ever leave her alone.

This was unsustainable. We could not take a reactive, hyper-vigilant collie mix everywhere we went and so we hired a trainer who met with us every week over Zoom. “My therapist,” I called her, and together we began the arduous process of desensitizing Veronica to our absence. We worked twenty minutes a day, five days a week—first by merely standing by the door, then by stepping outside briefly, finally by leaving for minutes at a time. It took four months of active daily training. There was a spreadsheet. It was the hardest thing I’ve ever accomplished.

But it worked. As of this summer, she can stay alone and her confidence around new people, other dogs, strange noises, and leaves has improved.

To have a rescue dog in 2022 is to endlessly wrangle, counsel, comfort, and analyze the actions, emotions, and attitudes of a member of a co-evolved species. Anyone with an adopted canine who doesn’t know what I’m talking about is either in denial or incredibly lucky.

While you might hear some old school dog owners and trainers talk about “alpha” dogs, “pack leadership,” and “dominance,” Paul and I are fully indoctrinated in the cult of positive reinforcement. There is no yanking the leash, no yelling, absolutely no hitting, not even a harsh tone. After months of classes (with waiting lists) and private training sessions aided by forty milligrams a day of a generic SSRI that was prescribed by a $160-an-hour behavioural vet, the notion that aversive methods would only serve to make my high strung, hyper vigilant dog more anxious is my gospel.

Training a reactive dog requires endless environmental management—crossing the street to avoid confrontations, buying a white noise machine to drown out the neighbours’ dachshund (when will they learn the subtle art of behavioural modification?), and tireless attention to things like body language and threshold. On the street, the mood is a sort of quiet cajoling that looks suspiciously like prayer. One must be equipped with pockets full of treats at all times to dispense along with a steady stream of singsong praise.

To train my dog, I must be attuned not just to her and her environment, but to myself. My frustrations, anxiety, happiness, and joy. We’re in this together—Ronnie and me—surviving our respective trauma by rewarding the good behaviour and ignoring the bad. Controlling what we can and learning, slowly, to look to each other for comfort when that asshole German shepherd walks past our house.

Nicole Pasulka writes about gender, activism, and criminal justice for publications such as New York, Harper’s, Mother Jones, VICE, and The Believer. The recipient of numerous prestigious fellowships, her writing has been anthologized in the Best American series and featured on NPR’s All Things Considered. Her first book, How You Get Famous: Ten Years of Drag Madness in Brooklyn was published by Simon & Schuster in June 2022.

Longread
The Cabin By The Lake
Guy Mirabeau was one of many dreamers who hoped to live beyond bureaucratic reach, but the colonial reality of the…