The Year in the Thrift Store

What were we obsessed with, invested in, and beset by in 2022? Hazlitt’s writers reflect on the issues, big and small. Keep up with this year’s series here.

In the beginning it still didn’t feel safe, so I dreamed about going instead. The setting was always a bunch of places from different eras of my life, interconnected. I’d walk through the back door of Beyond the Blue Box in Cobourg (dusty, concrete) into the basement of the Goodwill that used to be at the bottom of Roncesvalles (fluorescent, chaotic), then climb through a window into the Value Village up the street from my house (unventilated, lush). In every one there was my grandmother, sorting through boxes of books at the back. Sometimes other dream-type stuff would happen—a spontaneous farmers’ market in the parking lot, a Squid Game-style mass casualty, basketball over the PA—but for the most part I would just walk up and down the aisles, touching things and deciding. I tried on pants, sent pictures to Carlo, went through the checkout, stuffed my stuff in the big paper bag. Every time I’d wake up with an ache, like when you dream about flying or a very intense crush. Sometimes I’d remember to write down what I’d found, like a reverse shopping list:

, etc. I wondered whether I was supposed to read any significance into the items themselves, or whether all they symbolized was the strength of my addiction. Either way, it was just like real life. Sometimes I’d walk away with nothing. The store was just fifteen minutes from my house, this whole time.

I experimented with substitutes. I scrolled through Instagram accounts. I watched livestreamed videos. I tried Etsy and eBay and Depop and froze over the search bar. Sometimes a deep and primal and useless frustration would pulse through me. It was the anger of a baby. I didn’t want to know what I was looking for. I didn’t want to search or bid. What I wanted was the dream.

I used to describe it as a meditative activity. “My only hobby,” I’d say, in a tone like I was joking. “My only sport.” When I went to the thrift store I felt like I was kicking my brain into a particular gear, one that allowed me to work out more complex or high-stakes problems in the background while the more conscious part of my mind was absorbed in the upfront, surface-level act of assessment. I wasn’t totally wrong. There is a right-now-ness to it. You have to be present, paying attention.

But meditation implies a quieting down, a calm. I only learned that my only hobby didn’t work this way after my first concussion. I was stuck at home back then, too, and so bored, so exhausted, so tired of actually literally meditating, of “coming back to my breath.” I craved what the thrift store offered: a gear where everything was instinct. A chance to direct my focus outward, to completely ignore my body while also paying a lot of attention to it, from a pleasant distance. Alone, but surrounded.

The first time I thought I was ready to go back, I walked the five minutes to the Value Village closest to our apartment, this store I’d spent months recalling wistfully as a palace of ultimate calm, the only place where I could settle down. But the second I walked through the doors I could feel the fluorescent lights buzzing in my teeth, the noise and the mess and the people closing in around the edges of my peripheral vision. When I tried to look at a shelf, make some kind of order from the jumble of stuff, I felt a buzzing error glitch in my prefrontal cortex. Blood moved, burning, from my spine to my skull. I had to leave. I wouldn’t be able to come back for months. I had made an enormous mistake. There is a difference—it turns out —between calm and complete immersion.

On my first day back, a man came up to me in the aisle and offered me a crumpled 30 percent off coupon. I’ve seen you around here, he said. A lot. He asked if I was a teacher. I know I worked with you, he kept saying. I know we’ve worked together before.

They’d gotten rid of the change rooms. “Because of COVID,” one of the employees told me, rolling her eyes. I wasn’t entirely sure what that meant but also I completely understood. The downside was no change rooms, which basically eliminated the concept of pants. The upside was that now people left their discard piles on the racks near every mirror, little pre-curated collections you could scavenge through once they were done. I liked learning about someone by what they’d left behind—the through line of what they chose and chose to pass on.

Later, at the Showcase counter, I tried on a thick-linked chain. “Do you think this looks good on me?” I asked the woman leaning against the glass. “In what sense?” she asked, cautiously. She was right. Still, I walked out clutching it, elated.

Sometimes, instead of pride or accomplishment or pleasure, I’d feel a guilt-tinged melancholy settle into the back of my throat, or pressing on my eyelids. Sometimes I heard the voice of an old roommate, burned into my memory, asking if we could have a “one-in-one-out policy for the stuff you bring home.” Sometimes it felt more like renting. Like, I’ll take out something for a few years and then bring it back when it no longer fits, when I run out of space, or when I notice I’m not using it anymore. I thought often of Chris’s line about throwing things back into the sea. I’d drop a bag full of clothes off at the back of the store, then come through the front to find them on the rack again, returned to their rightful home. Sometimes I’d forget. Like the time I picked up a red Diane von Furstenberg dress that I could maybe see myself in, and walked around for fifteen minutes before remembering the first time I’d bought it, at the place near my optometrist where I was always finding good stoneware.

Other times I’d see something on the shelf, then meet it again a few days later on Facebook Marketplace, marked up by twenty to forty dollars. The Baribocraft salad bowl, the ‘90s IKEA wall lamp, the smoky highball glasses.

Every so often, these experiences would melt together, and I’d see something I’d donated to the store show up on Facebook Marketplace. First you would see it on a person’s kitchen table, being sold for thirty dollars more than they’d paid. Then the ad would disappear. Sometimes, a week or so later, it would show up again, this time against a white backdrop or on a teak table, with a phrase in the description like FOLLOW @BESTGIRLVINTAGE FOR MORE TREASURES. Each time, a different value assigned to it. Each time, it sold. Disappeared back into the sea.

There was still a truth at the core of my obsession I couldn’t completely articulate or understand, no matter how hard I tried. But sometimes it seemed close. Like when I put on the robe my grandmother gave me, the one I remembered her wearing every weekend of my childhood. Or when I visited Layne and she’d hand me a glass I remembered using when we lived together. These things had a glow, like sacred objects in a painting, or tokens in a video game.

The day I bought the bright-white jeans a man approached me, made the take-off-your-headphones gesture. I need your help, he said, not asking. I’m trying to pick an outfit for a funeral tomorrow. He brought me to an aisle where he had laid out a grey suit jacket and an array of different shirts. Which one do you think? I took a second, then pointed to a black turtleneck. Hm, he said, staring down at it. I’m not sure you know what you’re talking about. But thank you.

Later, checking out, I asked the cashier how his day was going. Pretty bad, he said, but at least I finally finished watching all the movies in the Child’s Play franchise. I asked some clarifying questions as he scanned. Later, as he keyed in my total, he asked a question that I recognized: it was a lyric from the theme song of a TV show I hadn’t watched since childhood. I racked my brain for a half-second, then answered with the line that came after. Later, outside the store, I unfolded my receipt and realized he’d given me the staff discount. Just for remembering.

2022 in Review
The Year in Going Home
There’s a one-sidedness to the second-generation relationship. The homeland looms large in our imagination but we don’t… 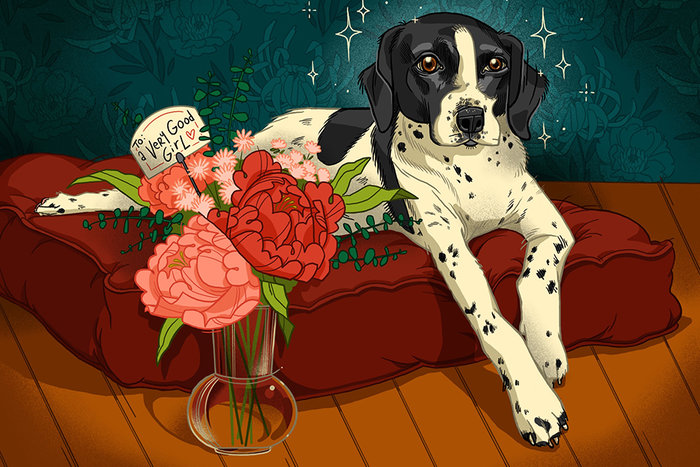 2022 in Review
The Year in Dogs
As grief shaped daily life over the past three years, one of the few things that has reliably brought me comfort  is…