‘Their Methods Were Not Gentle’

From a decaying airport lounge to fighting on the streets of Bangui—phantoms of the past loom large over the current conflict in the Central African Republic. The second in a series of dispatches. 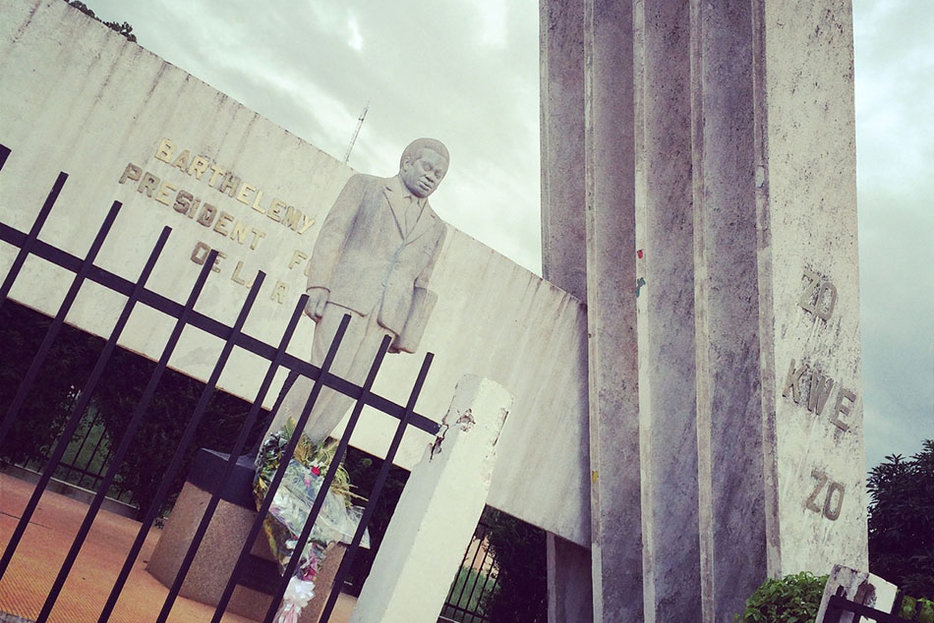 “Just listen to the ghosts.”

I was offered this advice before I left for the Central African Republic, and it turned out to be unnecessary. In the deserted VIP lounge perched above Bangui M’Poko International Airport’s lone runway, the ghosts never shut up. The terminal dates back to the mid-fifties, and in a room that resembles a dancehall built by Le Corbusier, the air is cooled by a breeze blowing off the slopes of the Bas Oubangui. The clock is dead at twenty past two, the bottles are covered in dust, there’s no one present but me and my travel companion and a man behind the bar who stirs up Nescafe. And yet everyone is here—dead presidents, French colonialists, rogue diggers, fake politicians, waylaid travellers, oligarchs fleeing with the good cutlery wrapped in their underwear. Every actor in CAR’s seamy drama, no matter how minor, must have a scene in M’Poko’s VIP lounge if they hope to feature in the country’s improvised, stream-of-consciousness history.

Among the spectral din, in the centre of the drama’s circle, we make out the figure of Barthélemy Boganda, CAR’s liberation hero. He was the son of subsistence farmers who lived and worked in the Lobaye district, Oubangui-Chari colony, where the Compagnie forestière de la Sangha-Oubangui held sway. The Comagnie, like some nightmare burped up by the colonial id, practiced a form of slavery called the corvée—forced labour in lieu of taxes—in order to make its aggressive rubber quotas. “Their methods were not gentle,” reads a history of the time. “They used the lash liberally to keep their ‘employees’ on the move, and they punished insubordination with mutilation and death.” In the late 1920s, a Compagnie official beat Boganda’s mother to death. And so the tiny, pious M’Baka boy was whisked off to missionary school, and later became the first ordained Catholic priest in Oubangui-Chari, a station he achieved in 1938.

But God could only do so much for a black man in Oubangui-Chari, and so Boganda was urged to run for the French National Assembly, where he served as a minister from 1946 to 1949. Like God, Charles de Gaulle too had his limits. Boganda returned to Bangui in 1950 in order to start the Movement for the Social Evolution of Black Africa, or MESAN. Zo kwe zo ran the movement’s Sango tagline, every human being is a person. On the cusp of formal independence in 1959, on his way back to M’poko International Airport, Boganda’s plane magically exploded in the sky. His people called him Black Christ, and while it was believed that he could walk on water, no one was shocked when it turned out that he couldn’t fly.

Alongside Boganda, among devils and decent men, one finds David Dacko, who replaced Boganda as the leader of MESAN, and became president of an independent CAR in 1960. He was pushed aside by his cousin, Emperor Bokassa, in 1965, who was pushed aside by, yes, Dacko in 1979. Who was pushed aside by Andre Kolingba in 1981, who was pushed aside by Ange-Felix-Patasse ten years later, who was pushed aside by François Bozizé in 2003. In the shadows’ shadows, we see the Frenchmen who passed through here, many of whom helped with the pushing. The one smoking contemplatively in the corner, the man who watches all and misses nothing? That is Jacques Foccart, de Gaulle’s (and later Jacques Chirac’s) man on all matters Africa. Beside him we find Jean Christophe Mitterrand, who maintained an Africa cell in his father François’s presidential office. The ghosts of men, but also the distant ghostly boom of planes exploding.

It is so crowded in the empty lounge that one barely has the elbowroom to raise the shitty coffee to one’s lips.

The ghosts outside are fresher.

It has taken three hours to get our visas along with our Memoire Porte, official accreditation documents that allow us free-ish passage through the country’s myriad checkpoints. I am travelling with the South African journalist Kevin Bloom, and we refer to these as our “puppy papers,” brandished as they are by our fixer, Rodrigue, whose mouth when we meet him is ringed by telltale malaria sores.

“Should you not be resting?” we ask him.

“It’s not a problem,” he replies. This, we will learn, is his tagline, his own version of zo kwe zo, and one that is infinitely variable in its meanings, and just as indulgent of CAR’s endless ironies and contradictions.

Off we go, into the divided city. The airport is less an airport than it is the heart of the French mission, named Opération Sangaris for the bright red Central African butterfly that adorns its logo. French military adventures in Africa are typically named for adorable local creatures: the anti-Islamist Opérations Serval in Mali and Épervier in Chad mean “wildcat” and “sparrow hawk” respectively. This tradition of nomenclature is now broken by Opération Barkhane (Crescent-shaped Dune), the 3,000-strong French force newly gathered in N’Djamena, Chad, to drone away the fundamentalists of the Sahel region. Sangaris doesn’t fall under Barkhane’s mandate, and thus gets to keep its pretty butterfly.

On the apron side of the M’poko, there are orderly planters filled with geraniums. On the Bangui side, there is a vast refugee camp, which held 100,000 people at the peak of fighting in December 2013, and is now home to 38,000. CAR is a land of acronyms, and these people are referred to as IDPs, or Internal Displaced Persons. Almost half of the country has been on the hop since war properly broke out in March 2012, and CAR therefore continues to perfect the compacting of immeasurable human misery into three letter combinations.

Bangui properly begins in the neighbourhood of Combattant. War, we learn, is woven into the fabric of everyday life. We pass by Sangaris forces in full battle armour. We pass by MISCA, the African Union forces, in their Chinese-made pick-ups. We pass by the decaying concrete ramparts belonging to the EUFOR base, where the European contingent awaits the action. Eight thousand seven hundred and fifty heavily armed men and women, all here to help France pay the price for inventing countries.

Yesterday, Rodrigue tells us, pointing to the furiously busy market along the main drag, a street battle broke out. The neighbourhood is dominated by one of the main rebel groups, the nominally Christian anti-balaka, which emerged as a counterweight to the nominally Muslim Seleka movement. But within the anti-balaka, which means “anti-machete” (an unintended irony, I am sure) there are many conflicting objectives, and sometimes those objectives whittle down to common thuggery.

“The battle was a fight—a personal fight—between an anti-balaka boy, and a captain in FACA,” Rodgrigue explains, referring to the (mostly) disarmed CAR national army.

How were these men, who are ostensibly being policed by three—three!—jacked-up, trigger happy, flak-jacketed international forces, allowed to exercise a mano a mano beef in broad daylight in the streets of Combattant?

The Central African Republic’s latest conflict, which bloomed into an international affair when François Bozizé’s government fell on March 24, 2013, has been described as an “ethno-religious” war and as a potential “genocide.” But in an age defined by ethno-religious war and genocide, these terms have ceased to be meaningful. Or more properly, they posses a negative meaning—they are used to clear conceptual space that must be occupied by something else, by not-ethno-religious war and not-genocide. Those non-states cannot emerge naturally and must be created, often by international decree. And so men come from afar, bringing chaos in order to quell chaos.

Bozizé was not a stooge. As a stooge without a master, he was considerably more dangerous than that. His regime fell apart quickly and spectacularly, and did so for the usual reasons—the sector of the population with the least access to representation and development sought their own benefactors, found willing partners in mayhem, and headed straight for the capital looking for blood. When the Seleka hit Bangui on March of 2012, killing thousands, Bozizé looked around for his backers and found none. The French were distracted, there were bigger fish to fry. “What mistake did a make?” he asked, bewildered.

There are no political prisoners at the moment, the press is free. Why did they start raping, killing and hurting the Central African population? We gave them everything. Before giving oil to the Chinese, I met Total in Paris and told them to take the oil; nothing happened. I gave oil to the Chinese and it became a problem. I sent [a representative to] Paris for the Uranium dossier, they refused. I finally gave it to the South Africans.

Whenever I read this statement, I am struck by the floating pronoun they. In his distress, Bozizé, who fled first to Cameroon and then to Benin, is certainly referring to the French. He is likely also referring to the northern rebel groups, most of them Muslim, who banded together to form the Seleka. And he is probably referring to Chadian leaders, who provided start up arms and financing for Seleka components. But in Bozizé’s conception, they transforms into a portal, sucking CAR toward the Élysée and the inscrutable designs of the country’s past/present/probably future masters.

Read the first dispatch in our series from the Central African Republic. 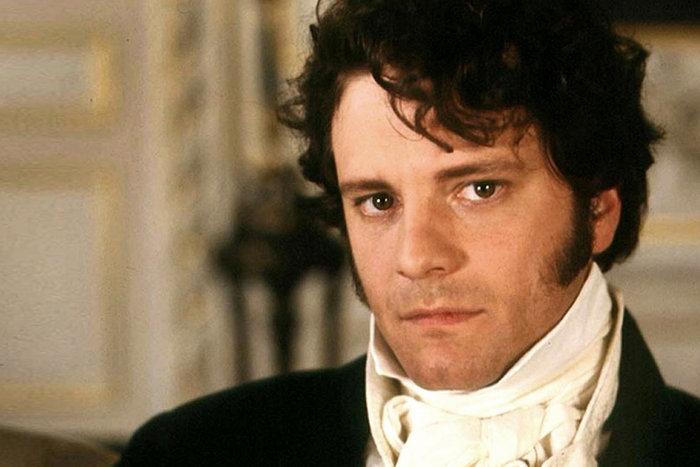 Unf*ck Yourself
Why Doesn’t My Partner Want To Work With Me?
In this week’s installment of Unf*ck Yourself: a sedentary roommate, an obsession with television, and a strong… 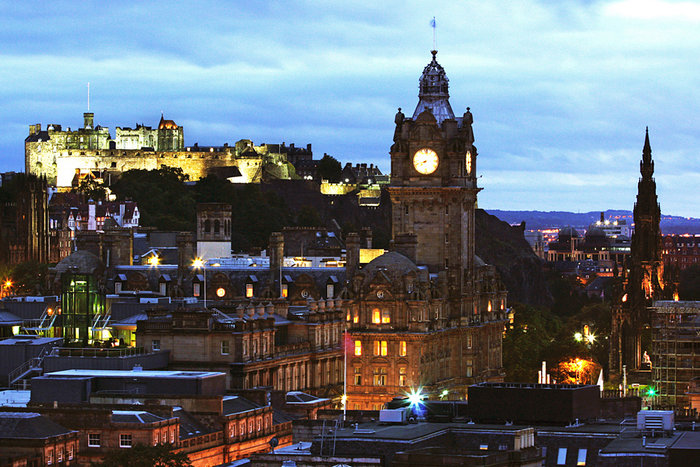 Politics
Nation-Building As An Act of Violence
Scotland may well deserve a position we in Canada take for granted, but there’s no reason to present the fight…