The Secret Lives of Dead Pigs

Our corpses react unpredictably when left underwater. Luckily for researchers interested in such things, humans and pigs decompose in remarkably similar ways. 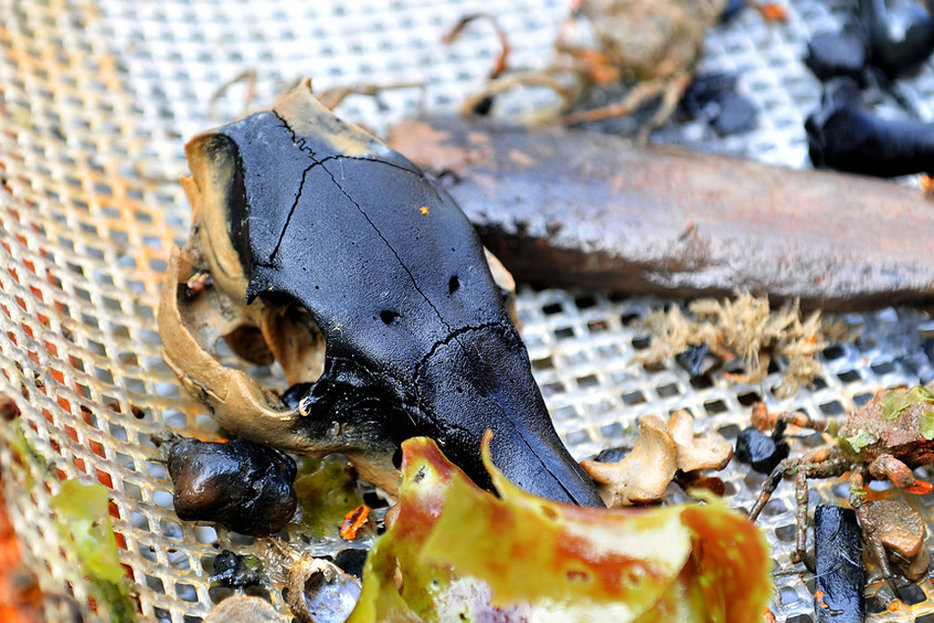 Let’s talk about bodies. The kind that are dead.

First come the maggots and the flies. They lay their eggs and colonize the body, which is now their home. They eat the outer tissues, and enter through the body’s holes. After the flies come the beetles, with mouths for chewing muscles and tendons. And while all this is happening, the body does some decomposing of its own—bloating and liquefying—until the bones are all that’s left.

In the coastal areas of British Columbia and Washington, bodies end up in the water all the time: 389 drownings occurred in provincial waters between 2007 and 2011, according to the Lifesaving Society. In some cases, it’s suicide. Accidents happen often, too—a B.C. Coroners service report indicates one fifth of all accidental drowning deaths happened in the ocean alone between 2008 and 2013. Sometimes, there is murder.

Questions about how corpses break down while submerged came up often enough in conversations with police that Dr. Gail Anderson wanted to find out more. A forensic entomologist and Simon Fraser University professor who has worked on Canada’s west coast for more than 25 years, she convinced a couple of divers in 2000 to do something… strange.

She had six dead pigs, and she wanted to watch them decompose. Underwater. For science. So, after some effort, down the pigs went.

People and pigs have a lot in common, see. Pig torsos are similar in size to human torsos. Our gut bacteria is similar, too. They’re not a perfect match by any stretch, but they’re the best we’ve got. And, what’s important here is that we both decompose on land in more or less the same way—bloating and putrefying until we are dust. Dr. Anderson bet that whatever happened to a pig underwater would be similar to what happens to humans.

Last month, Dr. Anderson and fellow SFU researcher Dr. Lynne Bell placed two more pigs at the bottom of the Salish Sea—the area between Vancouver Island, Washington state, and mainland B.C. She’s dropped 14 pigs at different sites around the area since 2006. Anderson’s focus is decomposition, while Bell, a forensic anthropologist who studies skeletal remains, looks at the bones. When a person falls into the water and doesn’t come back up—when a sand-encrusted limb is found on the beach, or pulled up late at night in a fisherman’s net—these are the women you want to talk to. Not even Lovecraft could imagine what these two know about what happens to bodies in the sea.

First come the maggots and the flies. They lay their eggs and colonize the body, which is now their home. They eat the outer tissues, and enter through the body’s holes.“From a forensic context, you get asked, ‘How long can the human body be in the water before it disappears? Just floating in the water or sinking to the bottom?’” says Dr. Bell. “We don’t really have a good answer to that question.”

On the one hand, there is a certain mythos surrounding the traditional burial at sea: that years or decades spent kilometres under the water will, naturally, obliterate body and bone for good. A casket tipped over the side of ship or a wealthy dead Viking sent floating out to sea is meant to have some finality, and we don’t like to think of our loved ones still sitting amidst the sand and silt. There’s also the opposite expectation when, say, a plane crashes or someone slips and drowns, that bodies will be recovered, perfectly preserved—dead, of course, but essentially whole. Neither is exactly correct.

Anderson’s early experiments in 2000 were simple. In the spring, divers placed six pigs in the coastal waters of Howe Sound north of Vancouver, and another six in the fall. In the days, weeks, and months that followed, they would go back in and look at the pigs when they had time. The observations they brought back were useful, but also intermittent and secondhand. Most of the activity was happening unseen. When Anderson put her first pigs under an overhead camera in 2006, she had no idea what to expect.

She had heard of cases where bodies recovered mere hours after entering the water had already been skeletonized, while others had remained intact for months. How long would Dr. Anderson’s pigs last? Would they find the skeletons, or nothing at all? And what role would factors such as temperature, season, salinity, oxygen levels, and depth play?

“We saw lots of squat lobsters, a lot of large lobsters. What was very interesting was we saw that the bodies were eaten, basically, rather than decomposed, in a matter of three or four weeks, just by the crab [and] shrimp activity,” Dr. Anderson says of her first video-recorded deployment at a site in Saanich inlet, 100 metres deep. “What we particularly saw was that feet—hooves—became disarticulated from the body very, very rapidly.”

(So when, in 2007, severed feet began to wash up on the coasts of the Salish Sea and people feared the worst, the reason for their appearance may have been mostly benign. Well, maybe not how they got into the water in the first place, but the fact that they were suddenly found unattached could likely be attributed to underwater creatures biting and clawing at the flesh and muscle and tendons of the once-whole limbs.)

But in the Strait of Georgia—the second of Dr. Anderson’s three deployment locations in the Salish Sea—at a depth of 300 metres, things were completely different. There were no lobsters or crabs to be seen. Rather, like underwater maggots, sea lice swarmed the pig’s carcass, forming layers six or seven centimetres thick. They entered the flesh, ate it from the inside out, and within days, the pigs were reduced to spotless bone.

What complicates matters is that you can’t rely solely on depth to predict how a body left underwater might fare; oxygen is a factor, too. In 2008, a pig dropped at the Saanich Inlet site at the end of September, much later than previous pigs, remained untouched for three months: the amount of oxygen in the water was too low at that time of year for most creatures to survive. And there are even further complications posed by the movements of the sea.

“You often hear of somebody who’s been washed ashore on a beach,” says Dr. Anderson. “Their knuckles are ripped apart and their face is just a bloody mess.” Without context, it almost looks like they’ve been in a barbaric fight. “But when you look at the whole body,” she continues, “the knees are the same. The body in the water [is] being dragged across the rocks and the barnacles and the like, up and down, up and down, as the waves go in and out. So what at first could look like a horrific homicide is actually a tragic accident.”

Much of what makes the pair’s grisly work possible is a network called VENUS (Victoria Experimental Network Under the Sea), an underwater cabled observatory operated by the not-for-profit group Ocean Networks Canada. The network’s submerged stations are connected to the Internet and packed full of web-connected instruments and sensors platforms—in particular, live video cameras—that allow Drs. Anderson and Bell to watch their pigs from ashore. Since August 2006, they’ve deployed two pigs per year with VENUS on a custom-designed platform—one covered, one exposed.

Live video is useful, because it allows Anderson to watch the decomposition process in real-time. But it has also revealed unexpected—if not entirely macabre—interactions between the pigs and sea life. Bell has seen crabs throw bones like javelins. She described one deployment where a seal actually sat in the open tray and played with the bones; VENUS technicians had to send a remotely operated vehicle to find the skull.

Bell has seen crabs throw bones like javelins. She described one deployment where a seal actually sat in the open tray and played with the bones; VENUS technicians had to send a remotely operated vehicle to find the skull.

“A couple of times sharks would chomp about half of the carcass away,” said Dr. Anderson. “And then, when there was a cut-open area, the sea life would come and feed on that cut-open area, and then they’d go internally. So you’d watch the pig, the skin of the pig, sort of deflate. You can tell tissue is being lost underneath. So eventually it looks like an old dirty shirt hanging on somebody [made of] bones. And then the squat lobsters would grab the skin and just rip it off, and it would come off just like a shirt, and the body would be absolutely spotless and clean inside, every bone looking like it had been professionally cleaned,” with no claw marks or bites left behind.

Indeed, the bones were “pristine,” Dr. Bell said, with one notable imperfection: they’d come up jet black. She isn’t exactly sure why—not yet, at least—but they regain their natural white colour within a day of returning to the surface. It is, according to Dr. Bell, “mysterious.”

They’re making progress on solving the rest of the puzzle, though. Dr. Anderson can tell you with a pretty good degree of certainty your chances of recovering a body whole or whether you’ll be lucky to find a single bone, depending on when and where a person was lost. She can tell you what’s foul play and what’s the product of animal bites, and has given such testimony in court. Next year, she wants to drop the pigs even deeper, to see what effect, if any, the higher pressure has at lower depths.

Their findings, for now, only apply to Saanich; there are still too many unknown variables to accurately extrapolate the results elsewhere. It’s still nearly impossible to predict, due to wildly different and rapidly changing peculiarities of environment and ecology, what will happen to a body once it hits the water. All we can do is watch and wait for the ocean’s next delivery to come ashore. 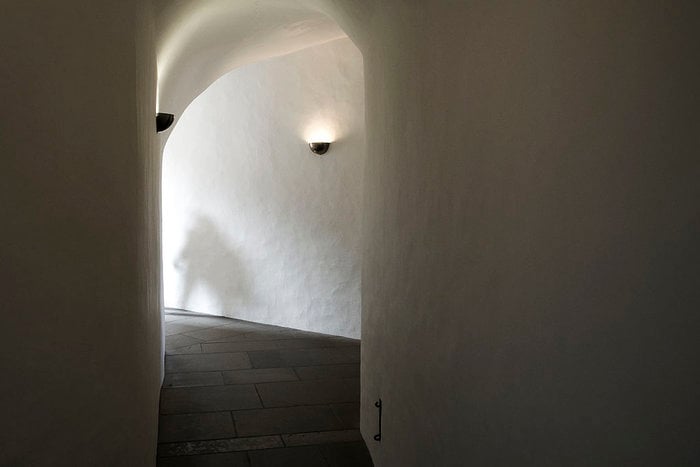 Essay
The Sad Lives of Famous Ghosts
Not everyone’s lucky enough to escape their haunts. 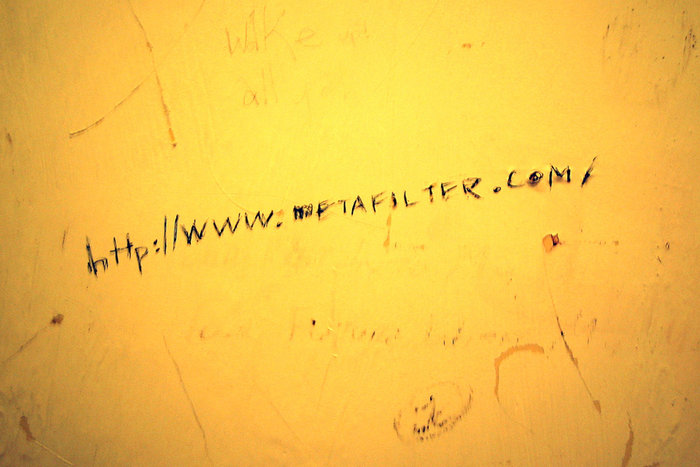 Technology
The Internet’s First Family
MetaFilter began in 1999 as a sort of humane proto-Reddit. Why did a site for sharing “best of the web” links…