It’s the New (Old) Thing: When Post-Punk and Literature Meet

From Pissed Jeans inviting Lindsay Hunter onto a song to Lynne Tillman writing for Y Pants to Kathy Acker performing with the Mekons, there’s a unique energy and catharsis in these collaborations. 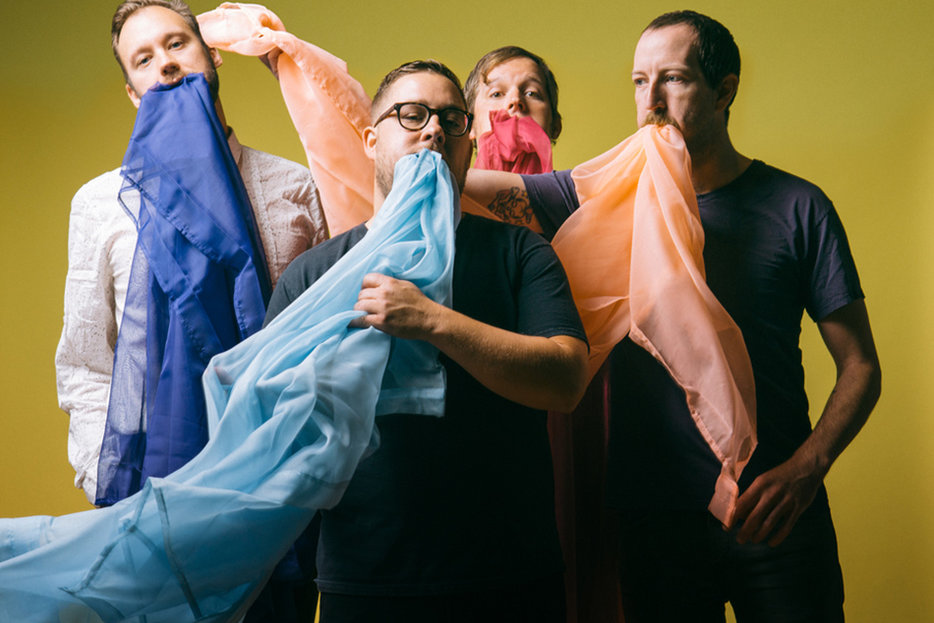 So let’s begin with Pissed Jeans. From the eastern side of Pennsylvania, they tap into a grimy, visceral strain of music, have one of the most evocative names of any currently running punk band, and put on a gripping live show. Their latest album, Why Love Now, was released by Sub Pop at the end of February, and right smack in the middle of it, prime sonic real estate to disorient discerning listeners, is a song called “I’m a Man.” Like many of their songs, it delves into the grotesque and the menacing: over booming drums and frenetic guitars, a voice declaims a narrative of toxic masculinity that would make the misanthropic protagonist of your average Shellac song blush.

“I’m a man, Miss Office Lady,” the narrator says, and proceeds with an unsettling and over-the-top method of seduction, using a tone of voice that’s both highly exaggerated and frequently sinister (“I’ll take the milk and the cow. That’s you. You’re the cow”). But the voice heard here isn’t that of Pissed Jeans vocalist Matt Korvette. Instead, those words were written and read by author Lindsay Hunter, whose books—including the novel Ugly Girls and the collections Daddy’s and Don’t Kiss Me—involve a host of similarly oversexed, comic-yet-sinister figures. Hunter blends in so neatly with the band’s sound and attitude, it’s almost a surprise such collaborations don’t happen more frequently.

Which isn’t to say they never happen at all. Earlier this year, Water Wing Records out of Portland, Oregon, reissued Beat It Down, the first full-length from No Wave band Y Pants. Originally released in 1982, the album offers plenty of archetypally post-punk moves: left-field instrumental arrangements, haunting vocals, and a general sense of aesthetic unpredictability. The phrase “don’t be afraid to be boring” is repeatedly intoned on “Obvious,” the album’s first song, with connotations that sound alternately liberating and ominous. In other words, it’s par for the course for that particular musical moment in time.

Where does the literary side of things come in? The song’s lyrics were written by Lynne Tillman, who went on to become an iconic writer among iconic writers, nominated for National Book Critics Circle Awards in both fiction and criticism. On its own, “Obvious” seems of a piece with the rest of the album, whose songs deal with alienation, flawed interpersonal connections, and subcultures, but its lyrics also fit nicely in with Tillman’s bibliography, the components of which frequently disconcert, experiment with form, and often bring artistic disciplines together. It’s not the only literary nod on Beat It Down, either: the lyrics to “The Fly,” the eighth song on the album, are adapted from Emily Dickinson’s “I heard a Fly buzz - when I died -.”

In his 2008 book on the genre, Marc Masters pointed out that artists identified as No Wave had little in common—except for, in the case of many, a brief existence. “Did the bands sound the same? Did they think the same? Did they all get along? No. There is perhaps only one question to which No Wave offered a Yes: is there anything left when you start by saying ‘No’?” All of which, then, makes for a subgenre that’s fairly open to collaborations, perhaps moreso than most. Why not bring in a writer to work on lyrics? Why not collaborate with someone outstanding in their own field but without formal musical training?

The moment in No Wave history from which Y Pants emerged is important to keep in mind. In his introduction to the 2006 anthology Up Is Up But So Is Down: New York’s Literary Scene, 1974-1992, editor Brandon Stosuy set the stage for the literary world that the book encompasses. Stosuy notes that the experimentalism of that scene had a greater aesthetic similarity to the punk bands with whom those writers frequently shared art spaces than more traditional concepts of experimental writing from the same time. “All in all,” he writes, “these writers have more in common with Reed and his Velvet Underground, the tight three-chord anthems of the Ramones, or the jagged sounds of Suicide and DNA than baroque Pynchon and his V-2 missiles.”

As tends to happen when likeminded creative figures congregate, disciplines began to overlap. Stosuy’s anthology is particularly useful in the way it showcases a cross-section of a particular scene, noting not just the punk ties of literary figures like Tillman and Dennis Cooper, but also the literary efforts of those known for their work in other fields, such as Lydia Lunch and David Wojnarowicz. Barbara Ess, best known for her innovative photography, is represented in the anthology as both a writer and designer, but has also been involved in several musical groups over the years, the aforementioned Y Pants included.

The same spirit of collaboration and the motif of punk and literature borrowing from one another—what Stosuy refers to as “the fusion of power chords and words”—persisted beyond the initial heyday of postpunk and downtown experimentalism. One of the most prominent writers mentioned in Up Is Up But So Is Down is Kathy Acker, who collaborated with the long-running group the Mekons on the album Pussy, Queen of the Pirates. Now might be a good time to mention this live footage of the collaborators performing on television, in which Acker dramatically reads from her work before segueing into the Mekons at their most catchily new wave, while everyone dances across the stage dressed as pirates. It is an amazing sight to behold. But more importantly, it suggests, like Lindsay Hunter taking the microphone on a Pissed Jeans song, that the overlap by a pair of artists with roots in the avant-garde can be surprisingly cathartic and ecstatic. It’s another way for musicians already taking their music in unexpected directions to go in an even more unexpected direction. In the case of Hunter and Pissed Jeans, for instance, this is twofold: adding a literally different voice to the band’s music, and folding in a representative of a new artistic discipline along the way.

The MEKONS & Kathy Acker ~ Live ~ Pussy, King of the Pirates ~

Pussy, Queen of the Pirates shares its name with a book by Acker, though the two works are distinct from one another. In a 1996 interview for the zine Carbon 14, Acker talked about how she had sought to explore questions of race through writing the book. Her answer, however, ultimately explores larger questions about the nature of collaboration and the work that can result:

“When I start it, I have no idea where it will end up. The same thing with the record with the Mekons. I didn’t know it would end up the way it has. I was using material from the book, but I think it’s also partly something else. Something you get from the record itself, or from the live performance.”

That sense of “something else” isn’t easy to quantify. Some of it might be the notion of taking a listener (or a reader, or a viewer) by surprise; some of it might stem from the friction that emerges from the best collaborations (and is entirely absent from the worst). It does seem notable, however, that plenty of those collaborations maintain a connection, even now, to the same downtown scene from which Acker played a part.

The producer of Pissed Jeans’s Why Love Now is, in fact, Lydia Lunch (who has herself worked across multiple artistic disciplines). A significant amount of the press the band did follow Why Love Now’s release delved into the band’s working relationship with their two high-profile collaborators. In the case of Hunter, that came via vocalist Matt Korvette’s admiration for her writing.

“I’ve just been a fan of hers and I reached out and we became friends,” he told writer Sarah Rose Etter in an interview for Fanzine. “I just love her writing. I wanted her to write something for the insert initially, but then I wondered does anyone even read inserts?” And so the band and Hunter worked together to create “I’m A Man,” which both feels like a natural extension of their sound and a necessary counterpoint to it. In an interview with the music website CLRVYNT, Korvette was asked about Lunch’s reaction to the finished song. His response? “Oh man, she was moshing to it. It was great!”

There are, of course, such collaborations whose lineage can’t be traced directly to that New York scene of yore. The Philadelphia-based poet, musician, and performance artist Camae Ayewa makes music under the name Moor Mother; her album Fetish Bones was released last year by Don Giovanni Records, best-known for being the home to music by punk artists ranging from Downtown Boys to Screaming Females to Alice Bag. In her introduction to her interview with Ayewa at Pitchfork, writer Jenn Pelly wrote that “she’s posted some 100 recordings to Bandcamp, with samples ranging from children’s hand games to Fugazi’s ‘Waiting Room’ bassline to the poets Maya Angelou, June Jordan, and Ntozake Shange.” Here, too, there’s a juxtaposition between the literary and the musical; here, too, the result is nearly impossible to classify, but frequently gripping.

Trying to force cross-disciplinary collaborations can backfire in a host of ways. But the upswing in these sorts of punk/literary collaborations feels organic: the increased presence of writers at music festivals suggests a move towards increased overlap, and as writers have embraced more performative readings, some have also gotten attention for that side of their persona—author Amelia Gray, for one, has recorded two sessions for the online music archive Daytrotter. A number of DIY performance spaces are also taking a cue from bygone days and hosting multidisciplinary work: the calendar for the Brooklyn DIY space Silent Barn shows readings and zine events alongside a host of punk and experimental artists. The result, often, is thrilling and unexpected: artists of different stripes challenging and complementing each other, and forging new ground together in the process. 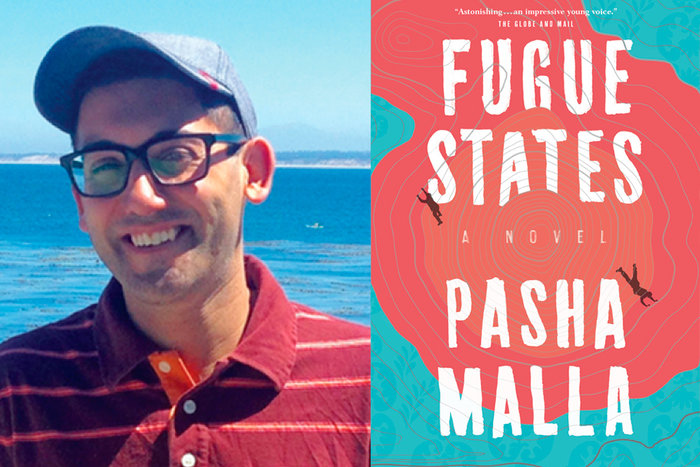 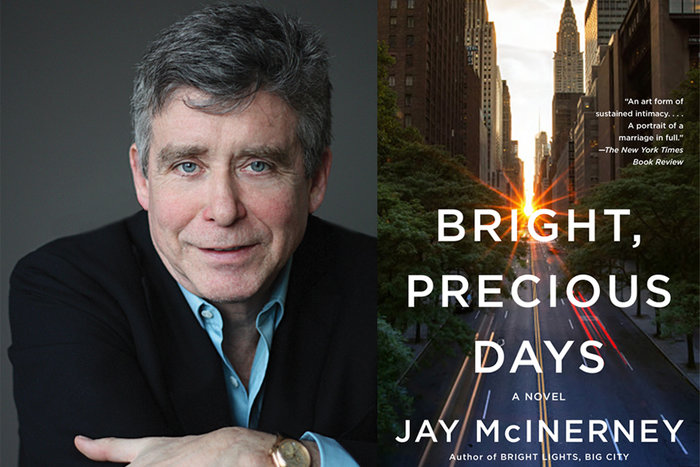 Interview
The Literary Turf of Jay McInerney
Speaking with the author of Bright, Precious Days about resisting contempt for your characters, differing degrees of…