From Deco to Dystopian: An architectural survey of Batman comics and movies. 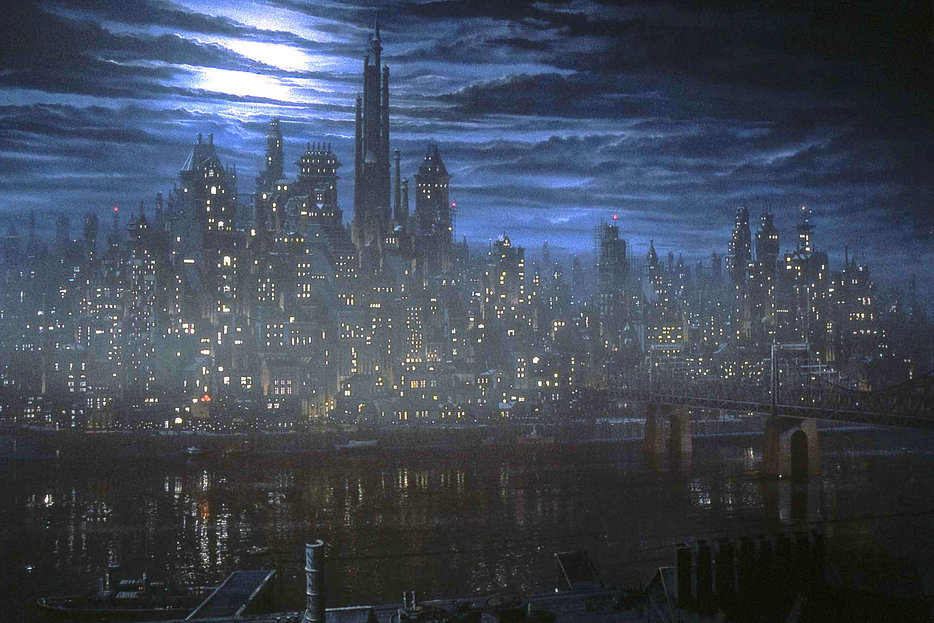 Chip Kidd’s name can be seen in many editions of superhero comics, from Year One to Bat-Manga, but until this year it was always as a shaper, editor, and presenter of someone else’s work. Though the influential book designer may have conceived the title, Kidd’s name didn’t appear above it. His new Batman: Death by Design is the first graphic novel that Kidd wrote himself, drawn in an anachronistic colour-leached style by British artist Dave Taylor. It’s an idiosyncratic book (this is surely Batman’s first adventure featuring site-specific art), one whose aesthetic obsessions guide its form and plot alike: Kidd’s big murder mystery involves a civic struggle over the fate of decaying, derelict Wayne Central Station.

That imposing edifice, an Art Deco colossus, suggests the old Penn Station, if it had been spared demolition and left to fester like Detroit’s Michigan Central depot. Although Death by Design foregrounds architecture like no other Batman story, the caped crusader’s built environment has always had a singularly atmospheric presence. Comics writer Denny O’Neil once described his subject’s home as “Manhattan below Fourteenth Street at 11 minutes past midnight on the coldest night in November.” But Manhattan in 2012 is not the Manhattan of 1990 or 1930, and Gotham City has spent 75 years defying its own preservationists. These images are both a timeline and a map. 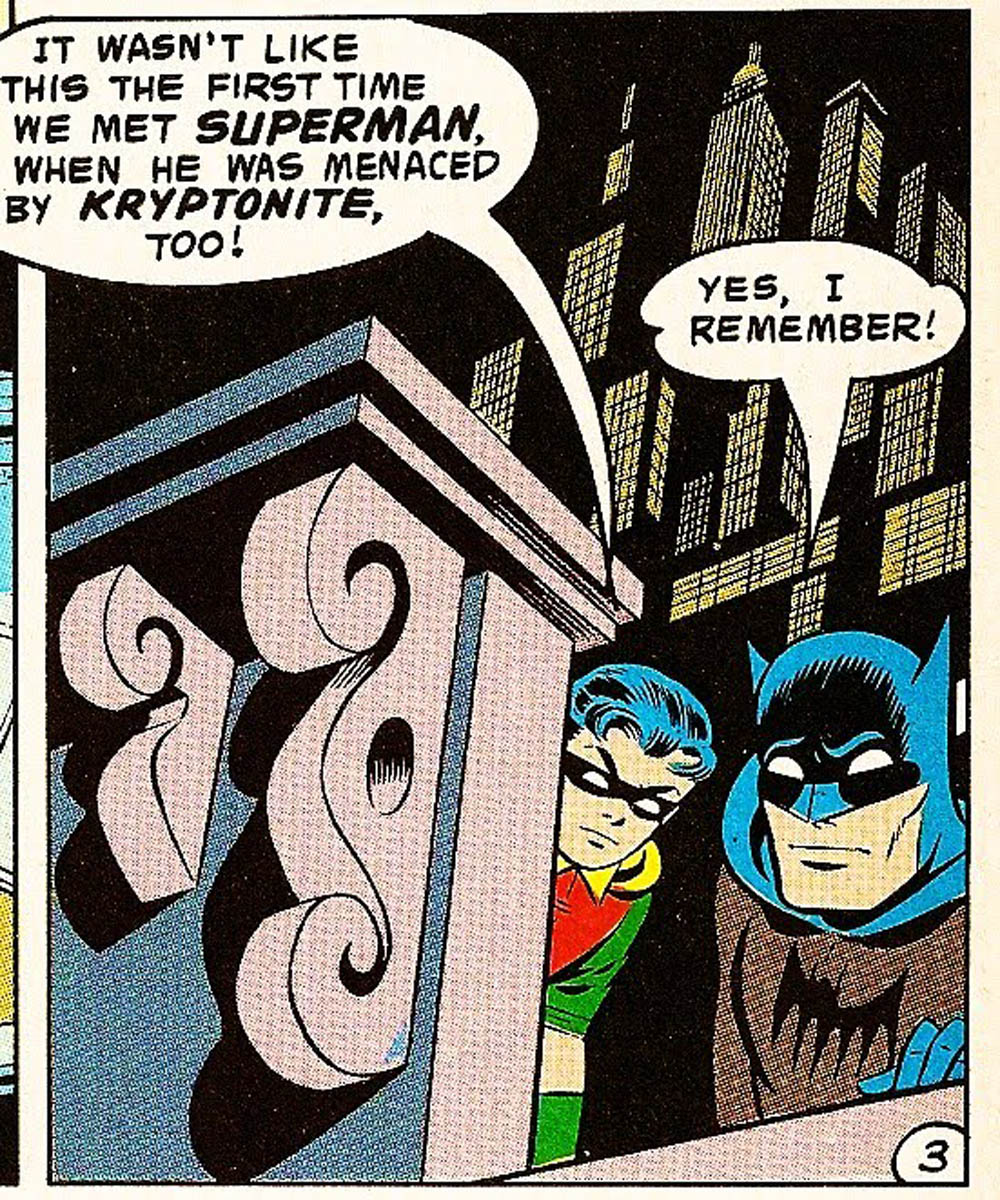 1. Bob Kane is the man with the “created by” credit in almost every Batman comic, but he was an indifferent artist, better at hustling than pencilling. (He negotiated one of the Golden Age’s least-unfair deals after falsely claiming that his first contract with DC was signed as a minor.) Kane’s original Bat-design has a spare, eerie Nosferatu quality, but the background on the famous cover of Detective Comics #27 is only barely a skyline. While cartoonists such as Bill Finger and Jerry Robinson made important creative contributions during these first years, the most memorable Batman artist of the era was Dick Sprang. The Ohioan explored Native American ruins as a hobby, and his thick line, wildly unreal, displayed a distinctive architectural sense. In Sprang’s Gotham, neoclassical columns coexist with early modernist forms (Bruce Wayne ends up racing to a lot of structures that resemble the Empire State Building). 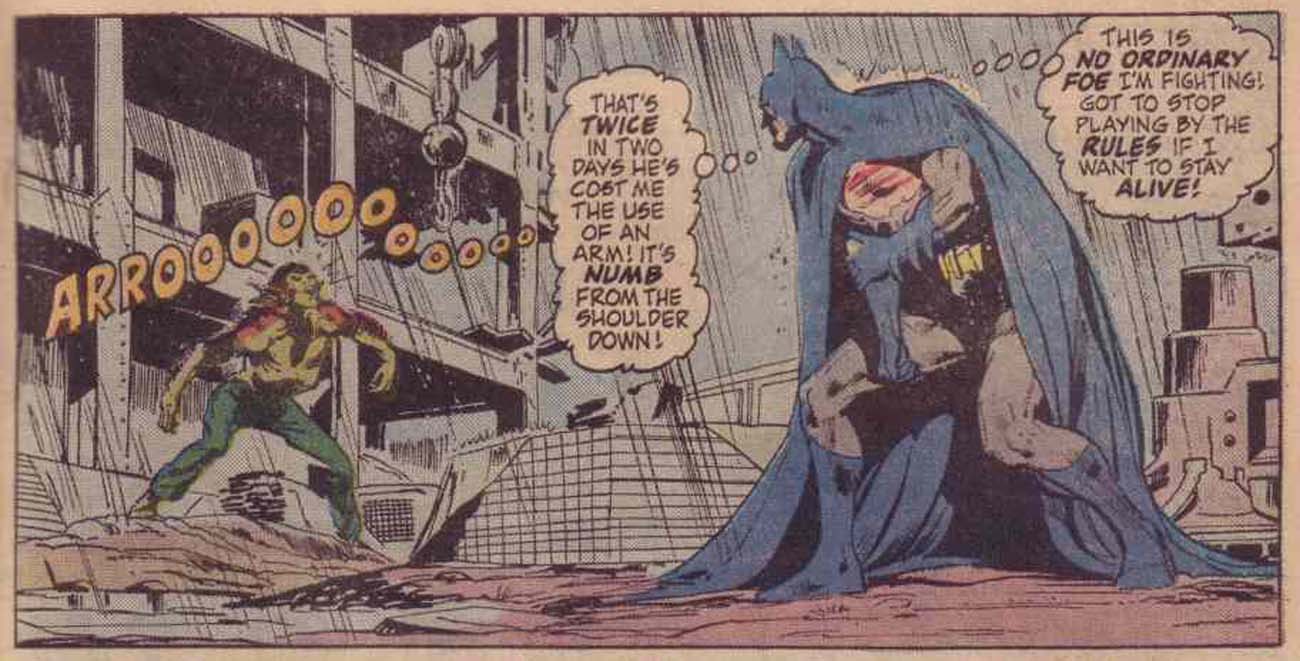 2. Though he was rarely credited for his work at the time, Sprang’s camp aesthetic became a house style, persisting well into the 1960s: the period that spawned Bat-Mite and Bat-Hound and the alien Batman of Zur-En-Arrh. This teeming absurdity reached its apotheosis in Adam West and company, giving Julius Schwartz, the new editor of the Batman titles, an opportunity to unmake the status quo. He eventually recruited the young artist Neal Adams, whose realistic, illustrative style suited Denny O’Neil’s darker, more worldly scripts. When not chasing Bondian villains like Ra’s al Ghul across distant dunes, their Bruce Wayne fought crime amidst ‘70s urban decline: disused warehouses, crumbling apartment blocks, vacant lots lit only by the moon. Soon the Joker would abandon silly, harmless pranks and return to his first pastime of gleeful homicide. 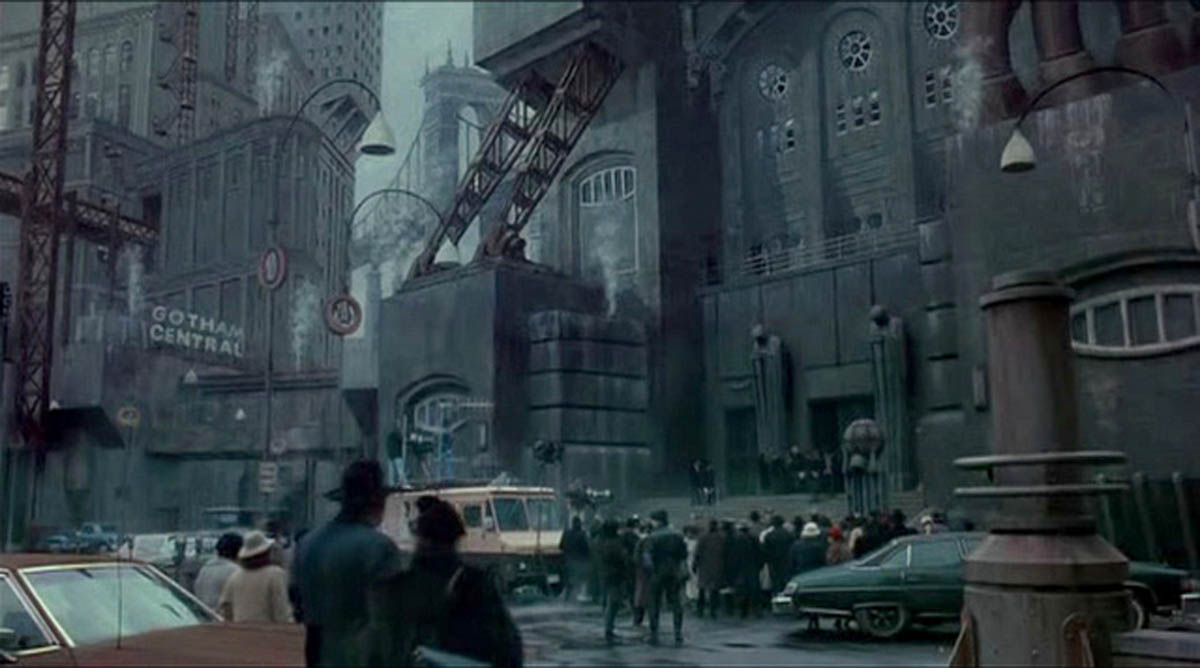 3. Production designer Anton Furst called his work on Tim Burton’s first Batman film “an essay in ugliness,” imagining a city where “hell erupted through the pavement and kept on going.” The hell in question is heavily indebted to the industrial pandaemoniums of Metropolis and Brazil, Art Deco ornamentation taken to an oppressive, expressionist extreme. Clashing architectural styles (the gothic stone of Gotham Cathedral towers above skyscrapers’ brutalist steel) only deepen the atmosphere of nightmarish anachronism. From the street, those steam-blasted walkways criss-crossing Furst’s cityscape might seem like the lines of a cage.

use The Dark Knight Strikes Again.jpg 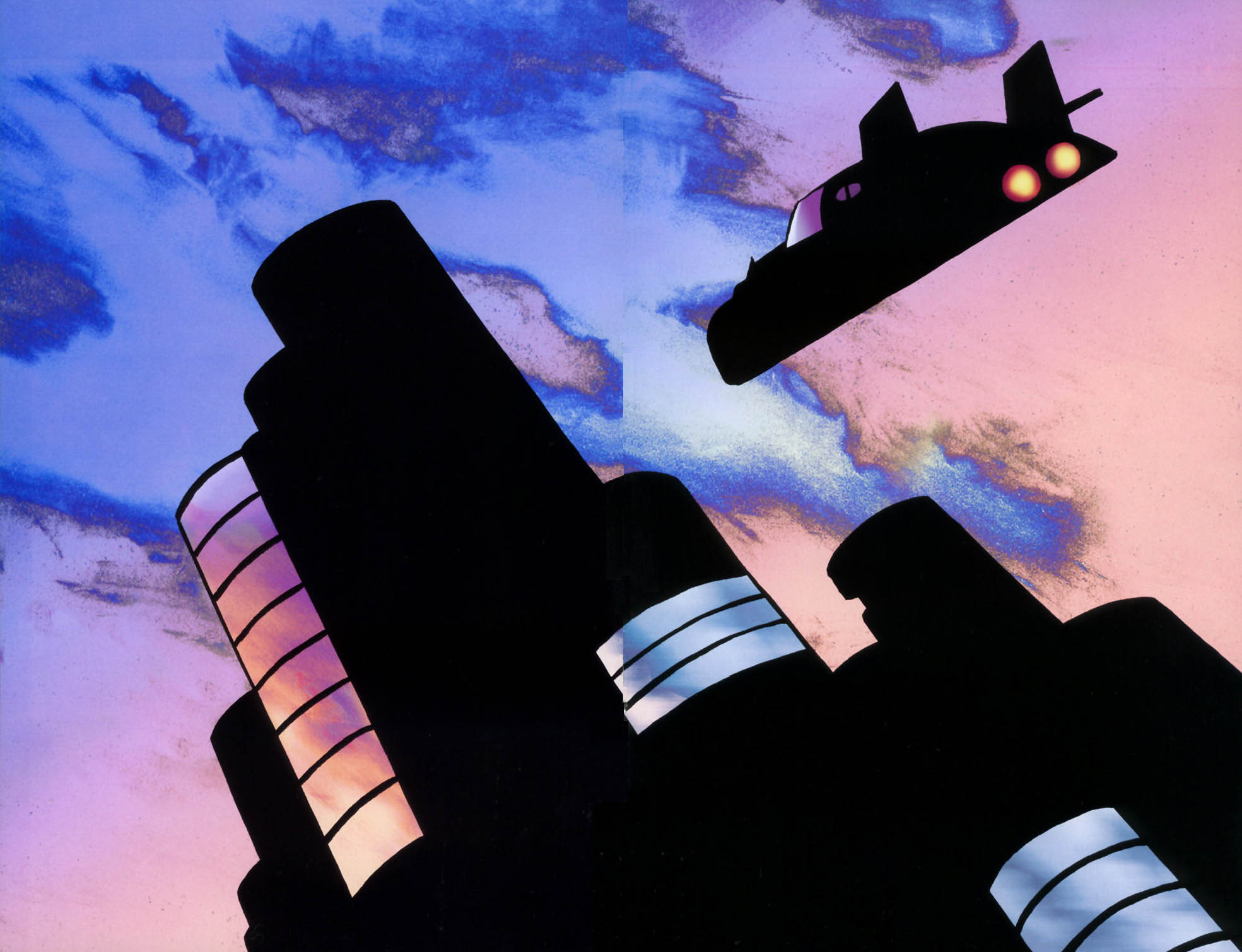 4. Nearly two decades after hurling Batman into an even more dystopian setting with The Dark Knight Returns, Frank Miller went back to his aged Bruce Wayne for a sequel called The Dark Knight Strikes Again. The story is something of a mess, dredging up nearly every vintage DC character imaginable (from Plastic Man to Prez Rickard to Randian vigilante the Question), its politics were confused except in their macho bluster. In terms of visuals, however, Miller was looking ahead. He once posited that Gotham is New York at night and Metropolis its waking counterpart, but here the two cities have blurred. Making liberal use of Photoshop, Miller and colorist Lynn Varley rendered Gotham in bright, garish hues, a city of plastic and chrome and neon. Even the skewed black silhouettes look unnaturally futuristic. 5. Metropolis was an obvious influence on Chip Kidd and Dave Taylor as well; their Batman wears a similar outfit as he did in the 1930s, their black-and-white panels are interrupted by mere hints of colour, and their version of the Joker looks like he was based on Fritz Lang’s sinister Dr. Rotwang. For once, the anarchic clown seems to be almost a secondary villain. Death by Design is a polemic about a city—the cast includes both spectral, enigmatic Exacto, a kind of costumed architectural critic, and an actual architectural critic—and its nemeses wield cantilevered glass rather than trick umbrellas or fear gas. The starchitect vying to demolish Wayne Central Station, Kem Roomhaus, fills Gotham with postmodern buildings like his airborne, sliver-thin Ceiling nightclub, as if the ultimate expression of wealth and power is going without walls at all. It’s a spectacle, at least, but the Joker is still better at those. 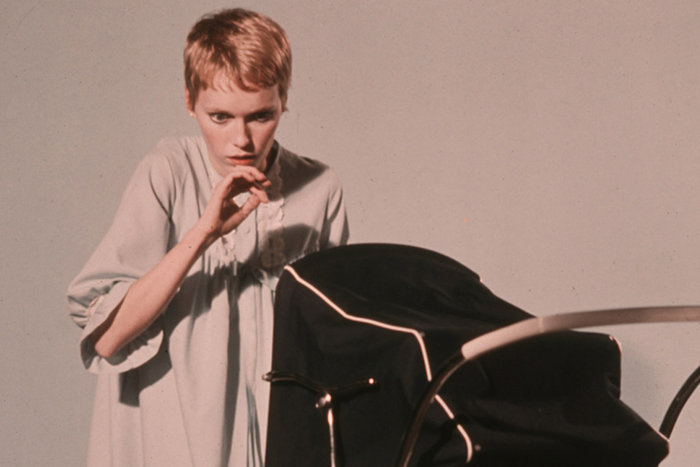 Culture
Pregnant Protagonists
The family way is paved with drug cartels and Satanists. Eight film heroes who made it through.