A Brief History of Indoor Trees

When there is a ritual, life makes sense.

Sarah Ratchford is a writer and editor living in Menagoesg/Saint John. Their work has... 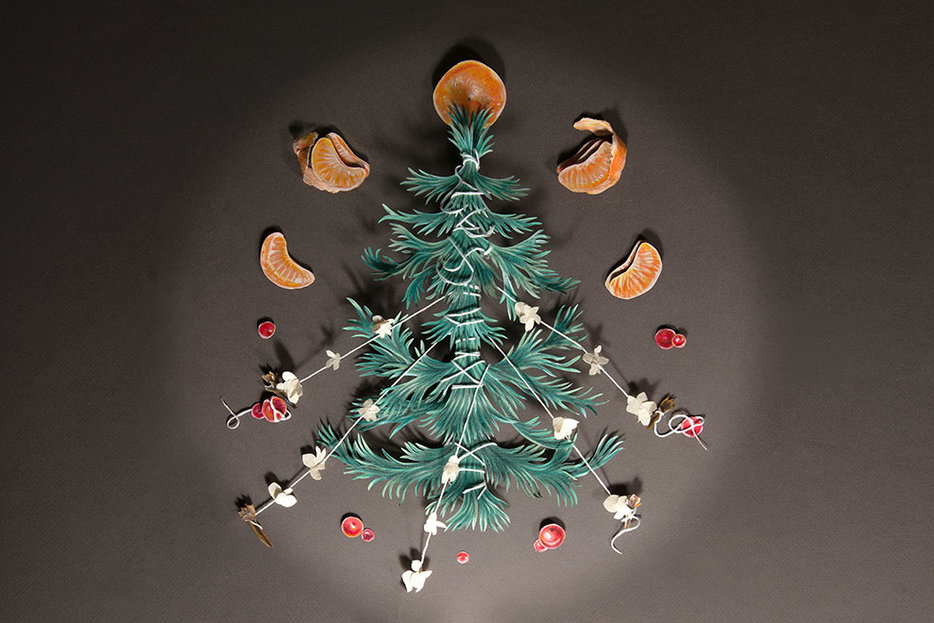 When I was a little kid, I remember my very Catholic grandmother wanting so badly to haul the bins of Christmas stuff out of the basement each autumn that it seemed she felt physical discomfort while she waited. But each year, she’d dutifully hold off until Halloween had passed.

November first, the bins would come out. The witches and Jack-O’-Lanterns would be packed away, the gourds and dried cattails (or bulrushes, as she called them, being a Maritimer descended from Brits) would be tossed in the compost pile, and all would be exchanged for heaps of Christmas paraphernalia. Huge violin-shaped structures my grandmother crafted out of pine cones, Christmas wreaths, and tole-painted snowmen adorned every surface. Then came the final touch: the tree.

Always committed to having a “real” tree (fake ones were tacky), we’d have to wait, for practical reasons. If you got one too early, it would be dry and withered by Christmas. It would also be a fire hazard. So, we usually got ours around December first. A few days later, my grandfather would teeter on the nearest piece of furniture and christen the scene with a litany of unholy words as he hogtied the tree in lights. Through her irritation, my grandmother would lovingly drape individual strands of silvery tinsel over every little branch.

For the first few years of my life, I looked forward to this spectacle. Everything was enchanted. Santa brought us surprises, Jesus came and saved our filthy souls, the adults were all in a good mood, and I could hoover all the candy I wanted without anyone noticing. After a time, though, I had questions. Why, amidst the magic, did we bring a tree indoors? It seemed out of step with the glitz of Christmas and its improbable twin tales of flying men and virgin mums. Later still, I found it perverse: why sacrifice so many innocent trees for a moment of selfish revelry? It seemed cruel. So, eventually, did the religion as a whole.

There’s something primordial about these markers of time. Most of us can’t help but join in on some iteration of cultural celebrations. They’ve survived wars, depressions, migration, religious persecution. There’s a need to do as our ancestors have done. The seasons offer natural breaks, and the need to celebrate them makes sense practically and emotionally.

This is true now, when time seems so surreal, perhaps more than ever. Our rituals give us something to turn to, something to do, when so much of what we normally do has become off limits. Where there is a ritual, life makes sense.

Rituals are the domain of people looking to get things done on purpose. Sometimes this realm is literal: Maya Angelou wrote in hotel rooms, and kept one in every city she lived in. “I insist that all things are taken off the walls. I don’t want anything in there. I go into the room and I feel as if all my beliefs are suspended. Nothing holds me to anything. No milkmaids, no flowers, nothing. I just want to feel and then when I start to work I’ll remember,” she told the Paris Review.

Our private processes connect us to the parts of our inner selves wherein we are competent individuals who know what’s going on. Sheila Heti tosses coins to get to this place in Motherhood; when she doesn’t know what to do, she flips three coins to get either two heads for yes, or two tails for no. The coins’ responses seem appropriately sage, and it’s a sensible solution. Carrying out the steps of a ritual can soothe anxiety, help us to zero in on our goal, and ultimately, help us achieve better results in life.

Delving into ritual makes it seem like there will be something to live for later; a good one will show you how to start over. Patti Smith summons this feeling as it relates to spring cleaning:

“On the first day of spring I shook out the feather bed and opened the shutters. Virtual lockets were falling from the branches of young trees and the numbing fragrance of the narcissus returned. I commenced with my chores, whistling an oft-forgotten tune, certain that we, as the seasons, prevail and that ten thousand years is yet a blink in the eye of a ringed planet or that of an archangel armed with a sword of glass.”

Our customs do more than put us in touch with ourselves. They connect us to others, too. The grooves of a pattern set into a life so much more firmly when they’re learned from our blood. Without consciously doing so, I’ve absorbed my grandmother’s rituals as the backbones of my own life. I vacuum and dust on Sundays with great vigour, I take pains to colour in my lips before I leave the house, and I do not spill salt without tossing it over my shoulder. Carrying out our familiar steps reminds us of who we are. Or helps us to figure it out.

Rituals can also help us heal and cope during times of grief. During this past dank, dark year, retaining some semblance of our former lives by cozying into familiar patterns has been a lifesaver.

December 21 has been celebrated by various cultures for millennia. It marks mid-winter, the pin in the centre of a long dark time. It’s the shortest day and the longest night of the year. The Romans, the Egyptians, the Celts and the Druids all celebrated solstice. Midwinter celebrations were intuitive to people, and they became a crucial part of making it through an otherwise gloomy season. The roots of today’s midwinter celebration extend all the way to neolithic observances of the sun. Stonehenge is set up such that when the sun sets on the winter solstice, it falls through the stones to land directly on the altar.

For each calendar-marked holiday or unmistakable feeling in the air that the season is changing, there is a corresponding marker on the Wiccan wheel of the year. The wheel includes four equinoxes and four solstices to mark each turning point. Many of these sabbats, as they’re called, have Christian responses. Ostara, or the Spring Equinox, lines up with Easter, and in early February, when we catch a hint that life might return, Wiccans celebrate Imbolc while Catholics celebrate the purification of the Church. Evergreen wreaths have been used to represent the wheel in midwinter celebrations for over 4,000 years.

Much of modern Christian tradition is appropriated from ancient pagan ways. The Christmas tree is a prominent example. For pagans, the tree is a sign of hope and fertility, since evergreens live throughout the darkest months. Holly and mistletoe, as some of the only plants to blossom in winter, hold the same significance. “The solstice was about bringing anything festive into a dark space, and celebrating that the circle was changing and things were going to get better,” says Dominique Wilson, a professor specializing in pre-Christian European folklore at Western Sydney University in Australia.

Christmas rituals were strategically placed by the church to come between the longstanding Roman ritual of Saturnalia and New Year’s, then known as Kalendae. Originally the celebration of the two-faced Roman god Janus, Saturnalia was a natural time of debauchery, since the harvest was over and the days were about to lengthen again. Christians didn’t approve of Saturnalia, and so they slowly co-opted the entire festival. University of Bristol professor Ronald Hutton, who specializes in paganism, maintains that the first mention of Christ being born in December came in 354, and Wilson (alongside many others) says that Christ was actually born in August. The custom of gift giving started with the Roman festival and because bringing greenery indoors at midwinter was so common among pagans in the northern hemisphere, the churches began decking themselves out in holly and ivy at Christmas.

While bringing greenery indoors at solstice was a pagan tradition throughout the northern hemisphere, and Wilson admits “bringing trees inside is quite pagan,” it’s also kind of not. Pagans are nature lovers, and Wilson says they would likely have gone out to a tree and decorated it outside, maybe leaving or trading gifts there, rather than killing it to bring it indoors. Wilson’s research suggests the actual Christmas tree was a Germanic tradition that started in the 16th century. Some bring the tree farther back: in the early 720s, it’s said that St. Boniface rudely hacked down a huge oak tree worshipped by pagans he was trying to convert in the village of Geismar in modern-day Germany. It was Boniface, and not the pagans, who ended up being widely credited with founding the Christmas tree.

It’s almost impossible to tell which Christmas customs come from where. What is clear is that the church felt threatened by the so-called “sorcery” and “heathen rites.” In 1155, the calendar was changed so that the year began in March as opposed to January. And Puritans effectively banned Christmas for two decades. But people kept up their rituals anyway, and in the end, they won: in 1752 the calendars were switched back to reflect the clear demand for solstice-honouring.

“The solstices and the equinoxes are so visible,” Wilson says. “The days get longer, the nights get shorter, we’re at equal lengths, so there is some logic to it for people.”

This whole year has had a mid-winter cast to it, so perhaps I needed my grandmother’s ritual more than ever. I made sure the one I bought was the most decrepit Charlie Brown version of a tree available. I dried some orange slices and made long strands of popcorn and cranberries to decorate it, along with some greenery from outside. At the end of the season, the tree and its trappings will go in the compost to make room for what comes next.

Sarah Ratchford is a writer and editor living in Menagoesg/Saint John. Their work has appeared in The Walrus, VICE, Chatelaine, and elsewhere. 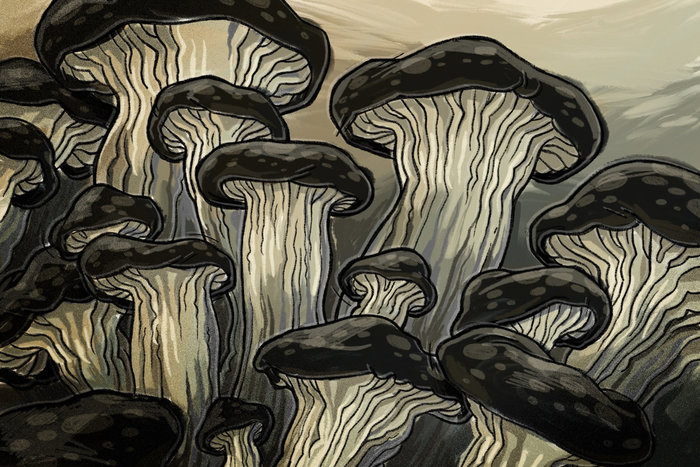 2020 in Review
The Year in Compost
Some find comfort in conspiracy; I’ve found it in asking the same questions about plants and insects and mold my seven-… 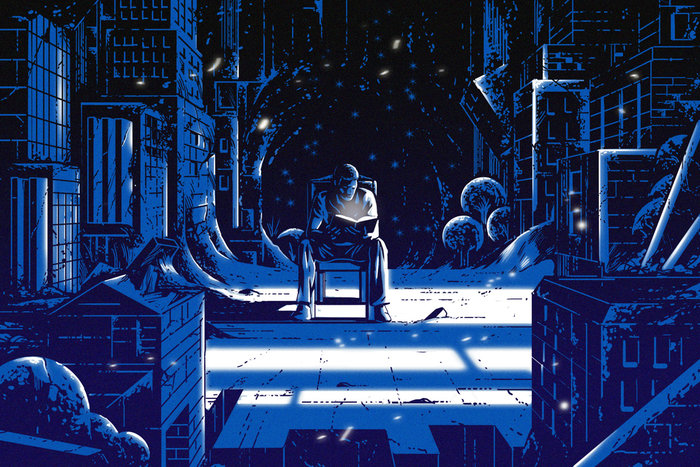 Society
What A Time To Be In Decline
Why, a decade ago, did my father give me the heavy gift of a controversial 100-year-old Oswald Spengler tome? It took a…