Our books, movies, and television shows are arguably bleaker than ever. What’s behind the encroaching, thickening darkness? 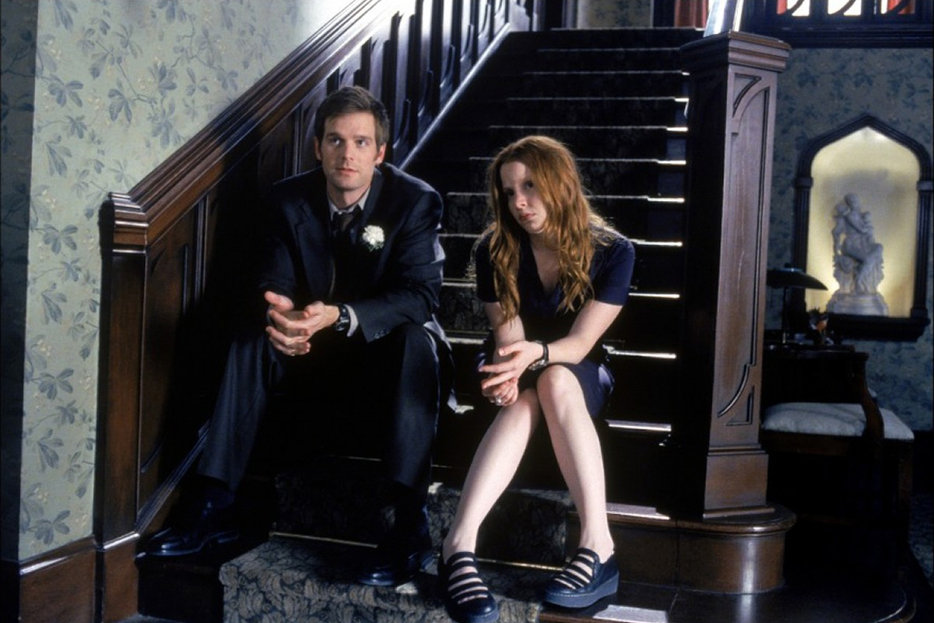 The 2004 French film Les Revenants (translated as They Came Back, now a TV series) opens with scores of the recently departed returning from the grave, not as dripping zombies but in the same chinos, polo shirts, pastel jumpers and twin-sets in which they were buried. Their hair is still over-coiffed in the funeral home fashion. They are not after brains but simply to re-integrate into daily life. From there the story unfolds: what a drag it is being dead.

The film is a harbinger of the modern art of misery and dread, also known as Bleak Chic. Precursors are many: the film Chinatown, for example, in which nothing good happens to anybody and which ends with the possibility that nothing good will happen to anybody ever again. In music there’s Joy Division, and in architecture there’s any federal building in Ottawa or North Korea, which turn out to be surprisingly interchangeable, both in aesthetics and functionality. Also, Nick Cave, Godspeed You! Black Emperor, Six Feet Under, and any Nicholas Ray film but in particular Johnny Guitar in which everyone is shot and the saloon burns down. The precursors of Bleak Chic carry a common theme into art: everything is grim, and redemption is more or less off the table. There may be a glimmer of hope, but it will take some digging and endless Slate essays to find it, the point being that B.C. refuses to hand over a tidy happy ending. It wants unvarnished realism.

Last year was a banner year for Bleak Chic. The podcast Serial, for one, took the classic whodunit and in lieu of revealing a villain made everyone guilty: the accused, the witnesses, the lawyers, the Maryland justice system, and by extension the listener, who was no further ahead by the end of the series. The victim, meanwhile, is still dead. In film take your pick, but the Polish film Ida managed to wrap anti-semitism, the Holocaust, Nazi collaboration, suicide, the death of children, and religious ambiguity into a sumptuous black-and-white package that doesn’t so much explore sorrow as celebrate it.

In television there was True Detective. As with Serial, the crime itself was beside the point. Everyone is guilty, if not of murder than of betraying a spouse or a child or a God (it takes place in an American South not so much guided as haunted by Christ) or, in the case of Matthew McConaughey’s character Rustin Cohle, of betraying his own moral compass. The visual style is smoky, as if burning brimstone leaks from cracks in the dried Louisiana mud. Only at the very end, when a broken, wheelchair-bound Cohle looks at the stars in the night sky, does True Detective hint at hope: the gesture tells us there’s something more available to us than misery, something bigger. But it’s just a gesture.

Purer to form is the HBO series The Leftovers, based on the novel by Tom Perrotta. The premise is ingenious: on a single day in October, fully 2 percent of the world’s population simply disappear into thin air in what may be a Biblical rapture. The series follows those left behind: the police chief with a secret past and his damaged family; the woman who lost her husband and two children and who now works for the Department of Sudden Departures settling claims; the troubled Episcopal priest who can only wonder why he was left out; and, the Guilty Remnant, a cult-like group whose members wear white, never speak, and for reasons never made explicit, chain smoke. The Guilty Remnant make it their business to harass the other townsfolk, to force them to remember their loss, a kind of community memento mori: never forget, it will happen again (which may explain the chain smoking: if all are doomed there’s no reason to lead a healthy lifestyle).

The show is stylish, if a bit too enamoured with its own clever symbolism, and despite some good jokes (it turns out Shaquille O’Neal and the entire cast and crew of the ’80s sitcom Perfect Strangers were raptured away on Judgment Day) it is consistently, relentlessly bleak. We watch men and women in pain wrestle with loneliness, guilt, and a chronic inability, or unwillingness, to connect with each other. Nora, the widowed woman from the Department of Sudden Departures, puts it this way, in a letter to the man she almost falls in love with: “I want to believe I’m not surrounded by the ruin of a dead civilization… I want to believe it’s still possible to get close to someone… bit it’s easier not to. Because I’m a coward. And I couldn’t take the pain, again.” The Leftovers is about grief and how we choose not to face it, how we ignore the Guilty Remnant, but it’s also a parable for the dead civilization of your own choosing: America, the family, art, the church, your workplace, wherever you too are relentlessly unhappy and feel like a coward. And it never lets up.

A solid companion to The Leftovers in the Year of Peak Bleak Chic is the debut novel by Atticus Lish called Preparation for the Next Life, which has nothing to do with the rapture, despite the promise of the title, but is very much about being left behind. Brad Skinner is a traumatized veteran of the war in Iraq, wounded and suffering from Post-Traumatic Stress, which the army and society expect him to get over with minimal aid and a few prescriptions. He winds up in New York, where he encounters Zou Lei, an illegal migrant from Muslim northwest China, who snuck into the country through Mexico, wound up briefly in prison, and now works whatever hours she can get at a food-court restaurant. It’s a love story, as doomed as Tristan and Isolde.

The writing is startling and original, the detail and dialogue stark. “On East Broadway,” writes Lish, “there was a condemned building where you could stay for ten dollars if you called the number… She looked past the notice that had been partly scraped off the glass and waited for anything to happen.” Preparation is concerned with the lives of those left behind by an impossible American dream: the dream of comfort, safety and the pursuit of happiness. In fact, only some people are called. The rest are abandoned. Like Nora and the police chief in The Leftovers, Skinner and Zou Lei have no recourse. What makes both the series and the book so bleak is this idea that any of us, out of sheer circumstance, might simply become trapped.

But there is another reading. One episode of The Leftovers has police chief Kevin Garvey reading from the Book of Job: “Yet I am not silenced by the darkness, by the thick darkness that covers my face.” For the chief, who has no patience for Testaments, Old or New, this is the bleakest message of all: if the point is to simply carry on, like Zou Lei waiting for “anything to happen,” that means more of the same. Misery, despair, pain. But he does carry on, and so does Zou Lei, as if they really were, despite all worldly instinct, preparing for the next life, whatever form it takes. As Nora writes in her letter, “Maybe we’re all beyond repair. But I have to move towards something, anything.” Even the bleakest of Bleak Chic can’t resist that glimmer, that the next life, or even the next day, might be different. 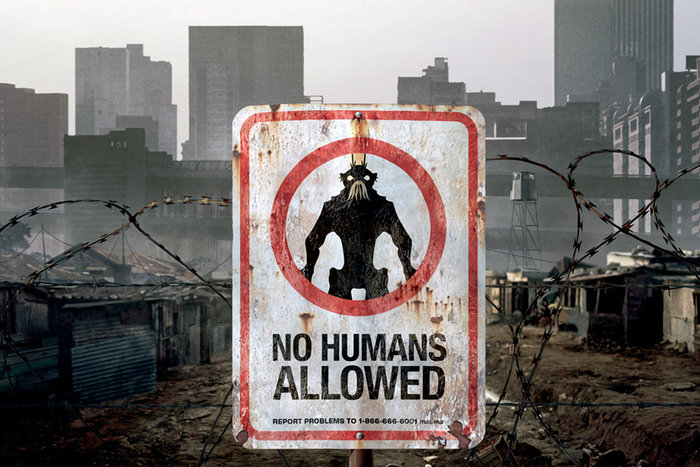 Society
Trauma is the Truth Worth Talking About
If the central political questions of our time are inescapably personal, how can we dismiss arguments for being “too… 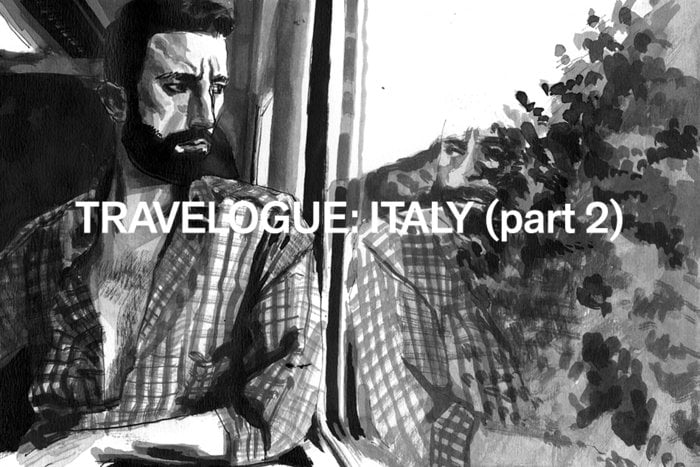 Comics
A Berlin Diary: Italy Pt. 2
Sholem wades into the swamp before bidding Italy, and us, farewell in the final instalment of A Berlin Diary.