Sina Queyras on Books and Bubbles 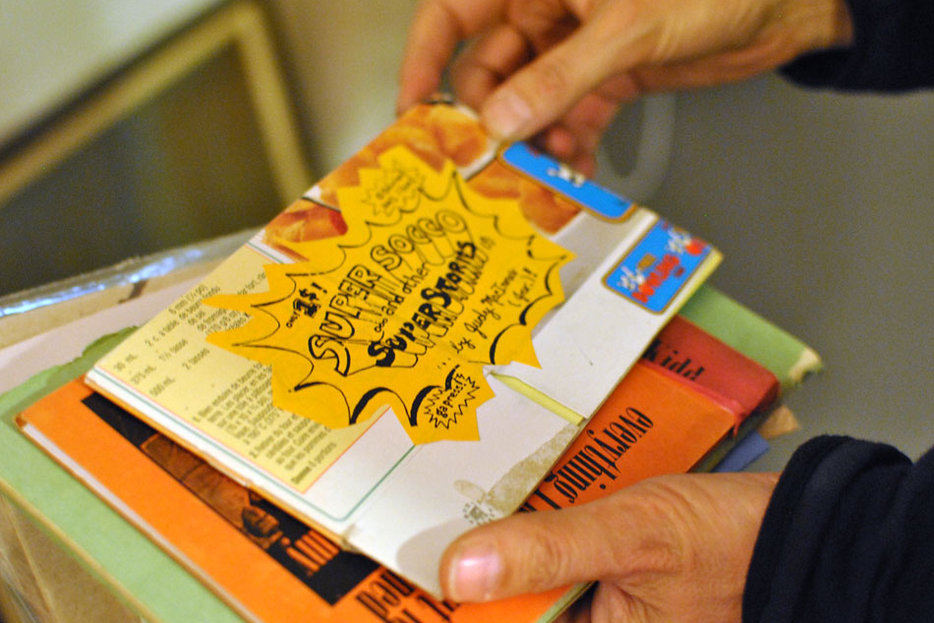 Shelf Esteem is a weekly measure of the books on the shelves of writers, editors, and other word lovers, as told to Emily M. Keeler. This week’s shelf belongs to Sina Queyras, the poet, novelist, and proprietor of Lemonhound, a vital organ of Canadian criticism online. Sina’s bookshelves are in her office at Concordia, where she teaches creative writing, and hosts the Writers Read and Synapse reading serieses. Walking into the space, she warned me about the dungeon quality of the windowless room, but really it was warm and inviting. “I have thing about lighting. I have a thing about many things,” she said. Fittingly, we first discussed the light by which her books are read, and Sina’s collection of vintage lamps.

The problem is deciding what books to have here, and what books to keep at home. I’ve gotten to the point that I generally have to get doubles of everything. And then the problem is more about the books that I don’t really like, but they’ve been written by friends or people I’ve met and liked. It’s a matter of balancing the books that are actually really useful and that I love, and the ones that are just here because I have to keep them. This is now mostly just books I really love, or need for teaching. For me everything is about teaching, or my own work. I work a lot with books. Generally my relationship to all the books in this room revolves around the question how can I get my students excited.

When we left Brooklyn, I actually left two boxes of books in the basement. This is the thing about moving; you lose a lot of books. Otherwise this whole office would be totally filled with books. In fact, probably I have about twice this much at home. But it would have been a lot more if it weren’t for the continual purging that bibliophiles think of as an evil thing to do. 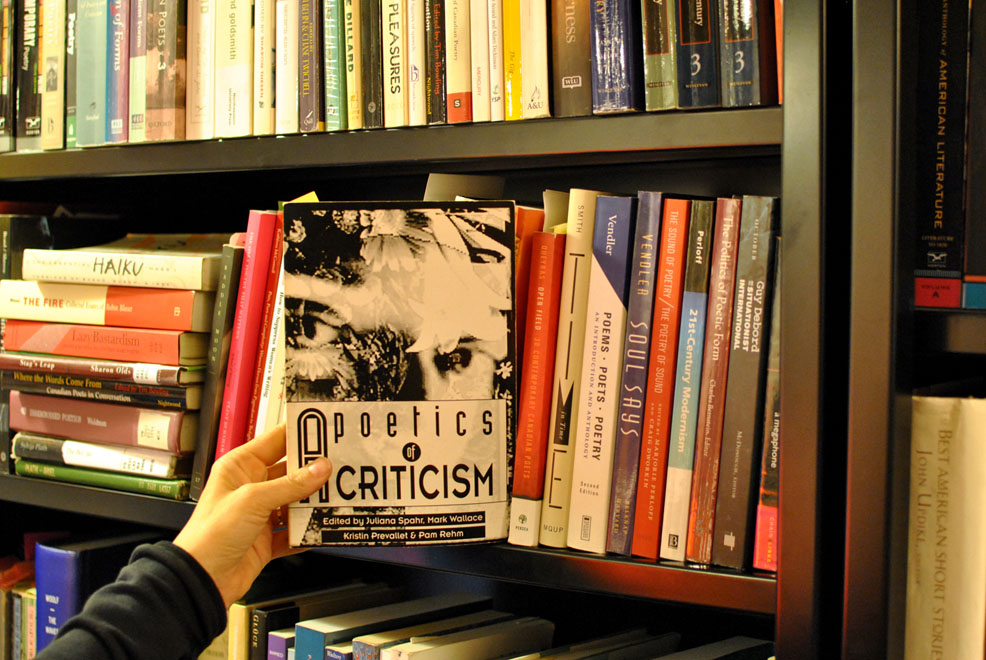 Especially when another writer visits—my friend Stephen Motika, the poetry director at the Poet’s House in New York, came into my library. He was in my office for about an hour, and at the end of it he came up with this one book, this one and said, This is probably the rarest book you have in your collection. There’s a bit of bravado, posturing. You can’t get away from that.

When I was in New York I didn’t have money, so I didn’t really start buying books, like as a fetish, until I got this job at Concordia. Because that’s when I started being able to afford books. Such as this. This is probably the most expensive book I own. It’s a reprint of Michael Ondaatje’s Tin Roof, from Boat House. It’s huge, and people who know about print and typesetting just look at the way the type sits on the page, and they have a little orgasm. They touch it. I don’t know, I couldn’t know what to say about it, but apparently the way this type is set is exquisite. And each one of them is autographed by the man. This cost what would have been my normal book budget for the year in the old days. 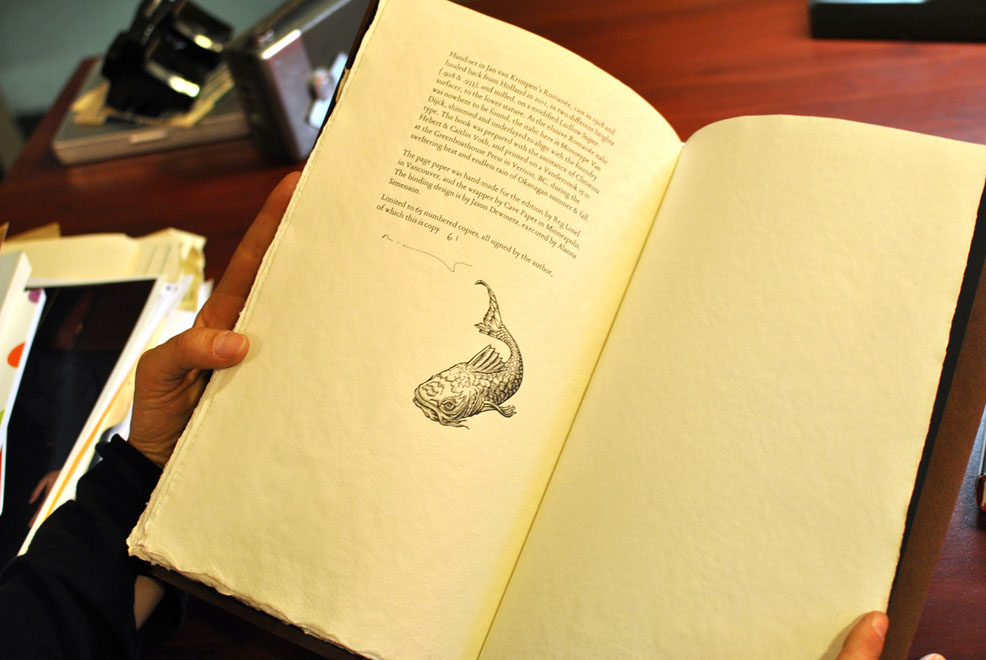 I taught this, Between Page and Screen, for the first time in a class room this year. It’ll take me a minute. While I’m at it, let me show you some other books. These are all chap books. At the end of the year, I take this box out and dump it on a table for my students. They go crazy. There are chapbooks here from the past 25 years . This is June McInnis. Early Katherine Kit. These are Greenboathouse. Do you know the Greenboathouse? It was actually one of the first online literary journals in Canada, and its also a press. They did ones from Sarah Selecky, Jay MillAr, they did one of my early chapbooks. A section on what would later go on to be, I believe a part of Lemonhound. 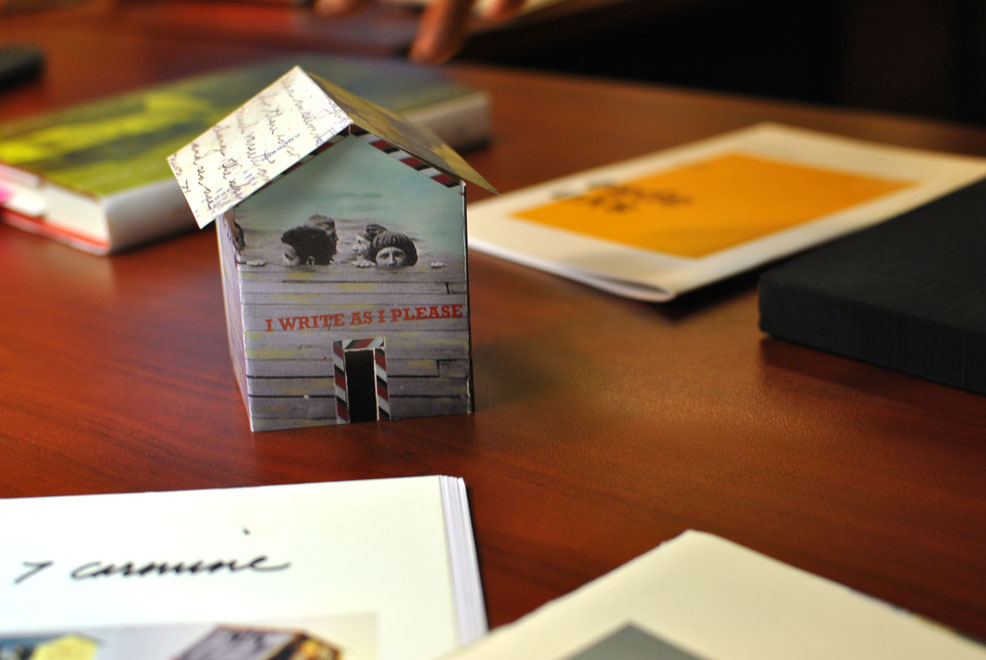 There’s a lot of variations in quality here. And they’re all hand-sewn. These are some of my student’s chap books. They’re pretty good too. Some of them are really exquisite. Some of them are really hideous. You can look through it all yourself. The chap books are really interesting. Some of them have so much energy put into them. One of these is a Rob McLennan. These are from was a writing group that I belonged to in New York. The woman who did the chap books, Elaine Sexton, she always did a wonderful job—this was part of one of the chap books. They always had launches in great spaces, and some interesting people. 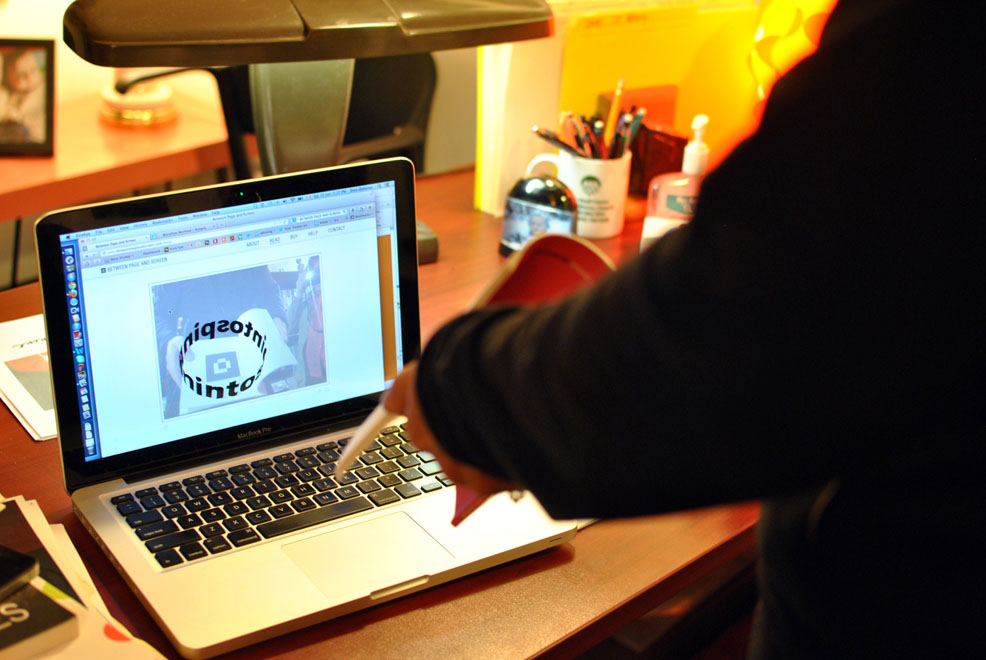 I’ve been thinking a lot about the book. For example, I don’t know how I’m going to show you this, but, Between Text and Screen. I like to teach this book at the same time I bring in the Michael Ondaatje book, because they’re so radically different. And yet they’re both really about the same level of attention, in terms of their making, the thinking behind them. And the love affair with reading. I love that a young woman made this, that she could imagine this and see it through. 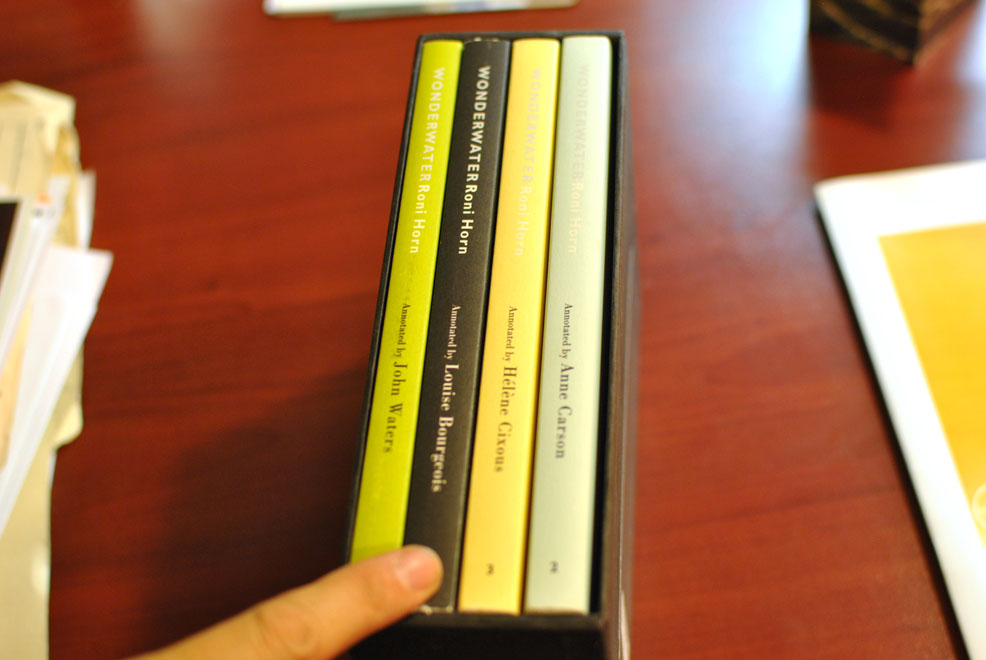 This was done by the visual artist Roni Horne. It’s the same text, and it was responded by different annotators. It’s very different; page 55 for John Waters is totally different from page 55 for Anne Carson—who, of course, will not be contained by this. Carson has to make a little special extra something, she adds little inserts of drawings. I love this book. I love that it illustrates to my students that you don’t have to be contained. 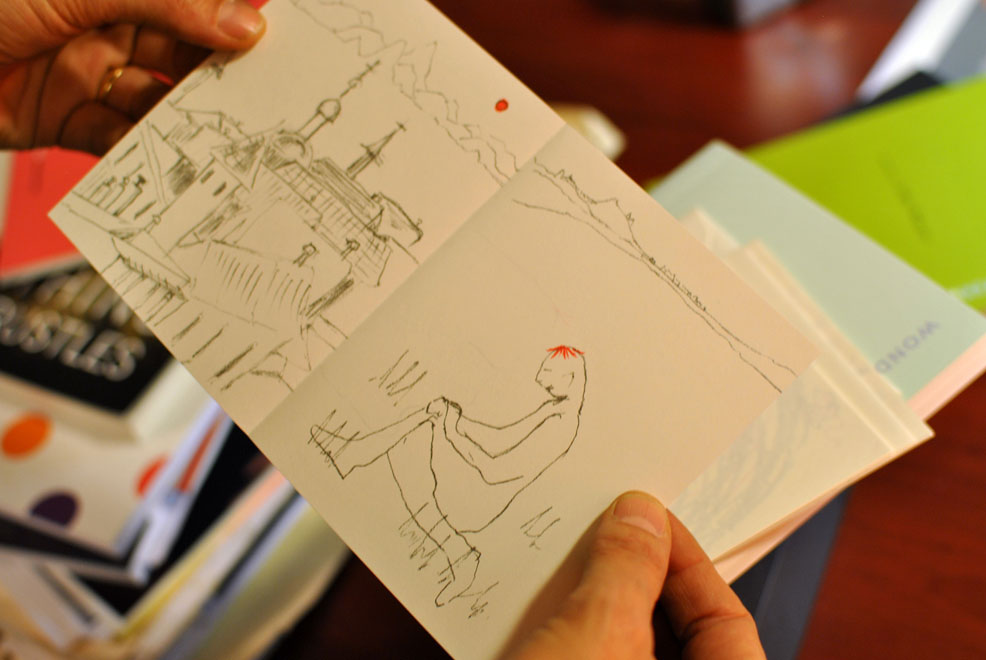 I love Yoko Ono’s Grapefruit. I give it away a a lot, it’s a perfect little gift book. I bet it was a bestseller for a long time, too. I know that Jonathan Ball’s Clockfire was really inspired by that book, and I would expect that Carson’s Short Talks bear, in a way, some relation to that book. 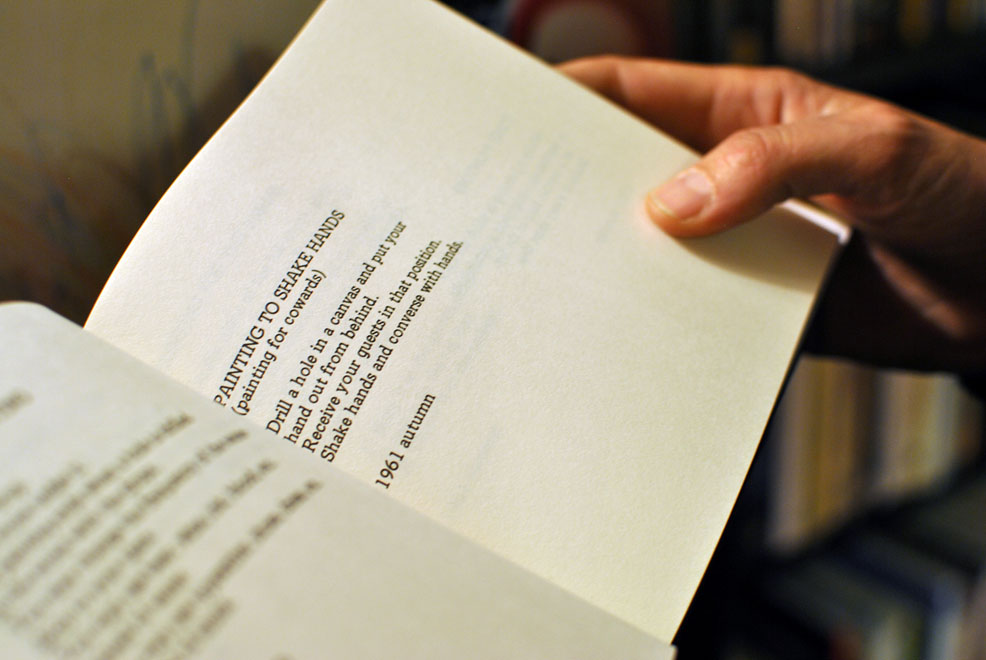 Do you know what a bubble we just experienced in the past 20 years? When I came to writing, nobody read books. There was like, Coles, that was the only bookstore outside of Toronto. I think people in Toronto have the wrong idea about the long theory of literature. What we experienced was a bubble, I think, a cultural bubble. I think that people need to understand that books have never really been so accessible as they have been in the past 20 years. Both the number of books and bookstores. It’s been a really beautiful time, but now we face a more surprising reality. But I don’t feel negative about the future of books either. It’s a really boring discussion. But we’re in a great time. Look at all these books. 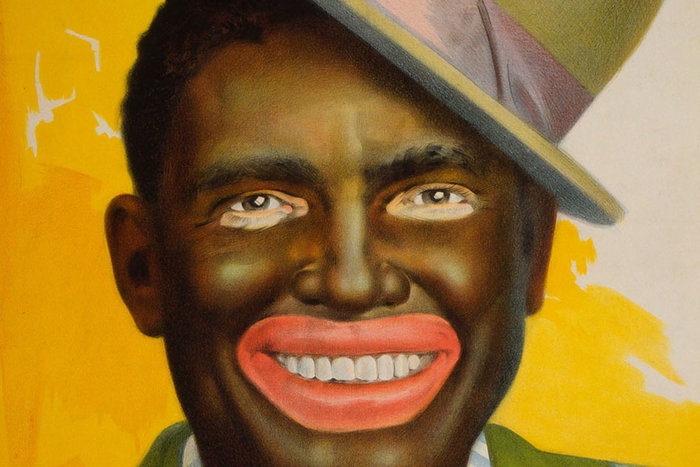 Lost Library
Chasing Monsters In a Dream
Emmett Miller was a secret father of pop music—who happened to perform in blackface. Was he a monster, or a genius, or… 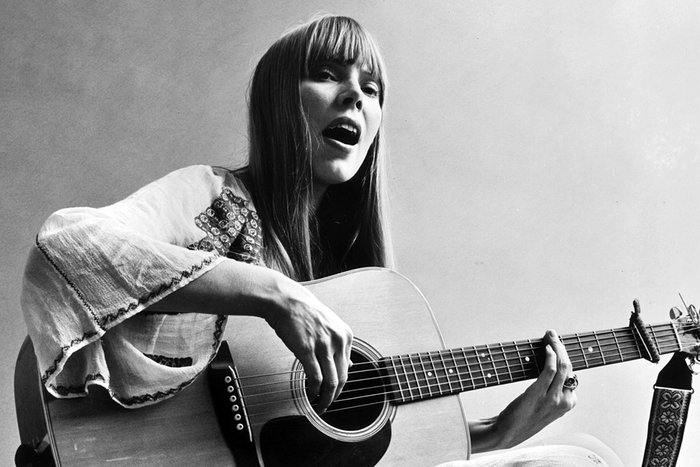