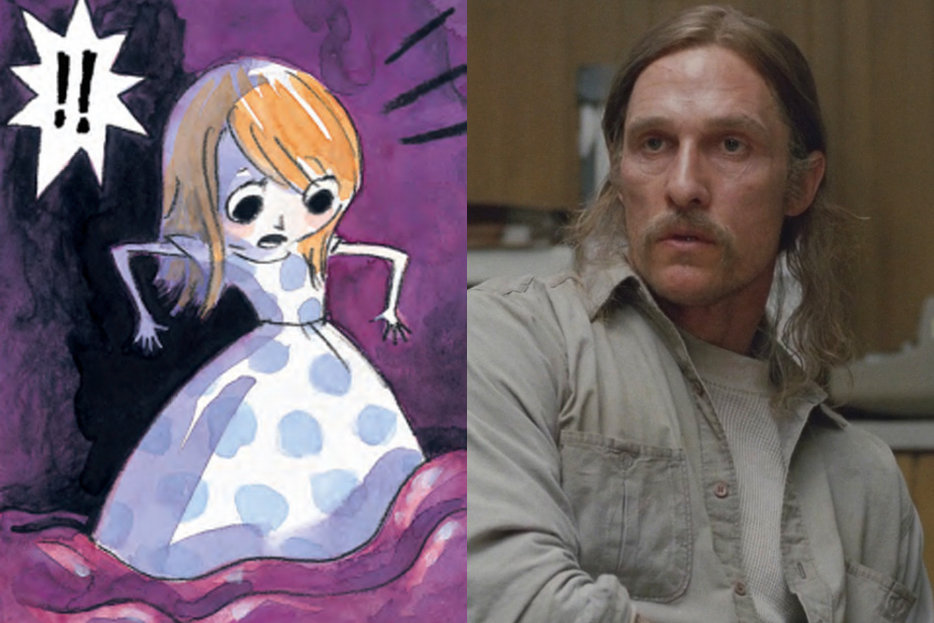 The last time I managed to throw a Halloween costume together, it was Lord Summerisle from The Wicker Man (“a heathen, conceivably, but not, I hope, an unenlightened one”). I must have been fated, then, to join everybody else obsessing over True Detective, the show where Matthew McConaughey and Woody Harrelson travel languid bayous to solve an increasingly vast case of ritualized murder, butch-sounding beers in hand.

The story owes much of its ominous atmosphere to the way it collapses and confuses existing genres, noir and Southern gothic and pulp horror, so that uncanny Mardi Gras masks or grim industrial vistas loom in the same frame as Lovecraftian occult sigils. Carving apart a standard police-procedural timeline—one set of scenes portrays the first 1995 investigation, while the contemporary one finds these ex-partners fielding questions about why its closure proved illusory—the interrogation becomes unreliable narration, as McConaughey’s Rust Cohle (severe, sinewy loner) and Harrelson’s Marty Hart (scrunch-faced jock) overwrite their past actions for some enigmatic purpose (heroic, it turns out).

This Sunday’s final episode might still spiral towards full supernatural madness, but although they captivate amateur theorists, I suspect the creepy allusions to “Carcosa” and “the Yellow King” will frustrate any elaborate code by design; they’re hinting at experiences beyond comprehension or explanation, like the society-warping corruption our duo is determined to contain. “The sprawl,” Cohle invokes in his desolate swamp of a voice, “a circle of violence and degradation.” True Detective is the kind of premium-cable drama perpetually fascinated by Dour Dude’s latest apocalyptic epigraph. In January, his admiring creator Nic Pizzolatto said: “I think both of these men are straight up heroes—they’re flawed men but they’re not corrupt. They’re kind of throwbacks, for better or worse, to a different kind of masculinity. They’re real men.”

Every character except Cohle and Hart is a plot-advancing prop—it comes with the territory, something made overt and actually pretty funny during the 2012 police interviews—but I remain disappointed that the female ones only ever fill a need for “naked and dead,” or “alive and seductive.” Rather dialectical otherwise, the show leaves genre traditions surrounding gender unmolested. The stated duty to protect women and children contradicts Cohle’s macho nihilism, albeit in such a way where each justifies and validates the other. Sure, our relationships are dysfunctional/nonexistent. Does that even matter, man, since human consciousness was a mistake to begin with? Still. Maybe we can redeem some small patch of this blighted world if we save a slightly more abstract family from evil men. Time may or may not resemble a flat circle, as several characters suggest, but a cop rationalizing what they do always will.

While waiting for True Detective episodes to download, I read another genre-deboning story in comics form. It starts with a corpse of its own, too. If modern fairy tales tend to filigree order or logic onto nature, Beautiful Darkness depicts inverse ruptures in the name of negation. Rendered in verdant watercolors by the French illustration team Kerascoët, a.k.a. Marie Pommepuy and Sebastien Cosset (Pommepuy co-wrote the script with Fabien Vehlmann), the book makes an unwitting death march look picturesque. The huge-eyed sprite Aurora hosts a tea party for her prince: “Care for a slice of cake, Hector? Perhaps two?” When slimy globs begin sinking downwards, they’re forced to dig through the putrefying chamber, seeing that this little pixie community’s home, the body of a young girl, is very dead. Though everyone cheerily sets off through the forest together, the early splash page where they make the eerie discovery lingers: tiny specks of colour atop a greying human landscape, arms stiff, eyes heavy-lidded.

Beautiful Darkness wouldn’t be nearly so horrific if Kerascoët’s watercolors weren’t this lovely. Although the fairies all look cutely stylized, the animals around them are painted with reference-text realism, and there’s a disturbing sense of violation when some ants drag a tutu-wearing imp off to their nest, or Aurora vengefully gouges out a mouse’s eyes. The two oversized human figures that appear seem to occupy a different plane of existence; most of the cast fails to register their status as living beings, formerly or otherwise. The dead girl has the presence of a decayed monument: lying as if asleep beneath blue moonlight, she begins to rot away in the background, until a creepy maggot-snacking character is dozing in her skull. The episodic story proceeds by seasons, humid greenery giving way to autumn’s ochre and then stained snow. In this book, nothing comes after winter.

Like True Detective’s hardassed commanding officers or traumatized oracles, Beautiful Darkness populates itself with archetypes. There’s the squabbling triplets, the shy outcast, the solitary warrior who wanders around carrying scissors on her back. They get up to the same playful antics as they would if Enid Blyton had scripted them, but here those often end in deadly accidents or blithe cruelty. Aurora’s foppish Prince Hector, fond of calling upon his “faithful companions,” betrays her in a spasm of callowness. The itinerant colony has a would-be queen in the form of a sprite named Zelie, who buries her lessers alive as a social experiment, issues commands based on irritable whim, and pitilessly exploits the protagonist’s dutiful, trusting personality. Aurora herself gets drawn and characterized like a near-parody of traditional girlhood, devoted to true love, helping others and the many creatures of the forest. What she doesn’t realize, Pommepuy and Vehlmann suggest, is that society squeezes virtue from women with a fist—until her tormentors flaunt it a touch too blatantly, and that sufferance hardens into wrathful resolve.

The critic Joe McCulloch described Kerascoët’s book as one where “fanatically precise attention is paid to the poetics of the natural world, all in the midst of the sort of horror narrative that downplays shock scares in favor of a hideous sense of inevitability.” Without a mystery that needs telling, it heads deeper into nihilism than even True Detective has so far. Rust Cohle might keep a copy of Beyond Good and Evil on his desk, and Beautiful Darkness lacks any Cajun Cthulhus or backwoods death cults, but the latter hits on the most convincing aspect of the philosophy, the notion that good/bad binaries break down when a harrowing choice might also be the life-affirming one. (Such as Marty Hart’s wife Maggie fucking his partner out of spite over all his extracurricular partners.)

After prolonged degradation at their hands, Aurora would rather incinerate her family than save it. Nature isn’t a conspiracy of the otherworldly and sinister, nor is it a playground for sprites to frolic underfoot. It simply does not care about us, which is how the evil finds its way in—or the fellowship. 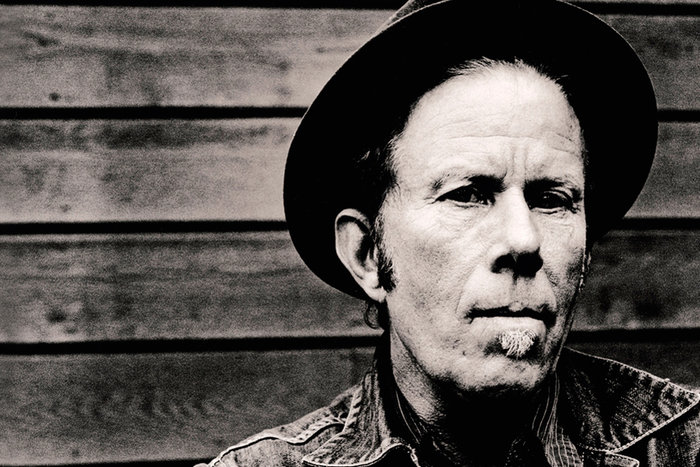 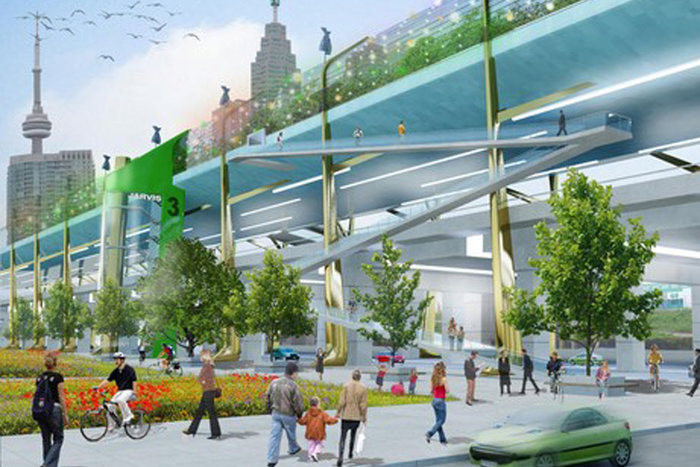 Urbanism
Making Way For Anything But The Car