The Year in Slime Videos

By all accounts, 2016 was an abysmal year. That’s why I found myself losing hours on Instagram to soothing images of slime. 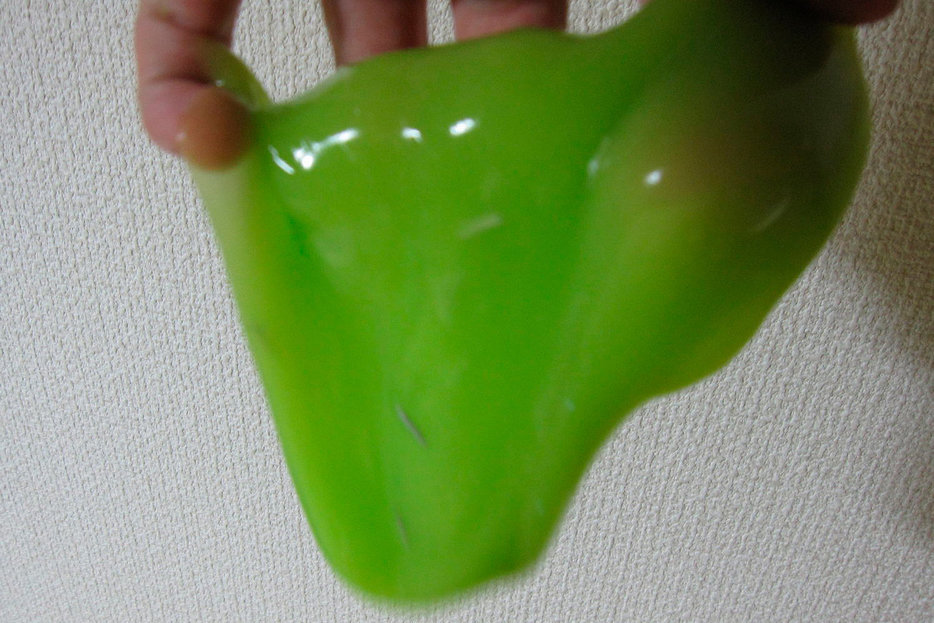 In August, I inadvertently moved in with an animal abuser. The tiny Park Slope apartment was stuffed with three cats and a dog. On my first weekend there, the roommate had left her dog locked in her room for two days, pee pads littering the floor, so she could go cavorting on Fire Island. As I arrived in my bedroom, I was greeted by an ossified log of cat shit on the bed. It had been there long enough for the acrid smell to soak into the mattress, resisting multiple attempts to clean it out. Having nowhere to sleep other than a bed that reeks of feces is a form of succinct psychological torture. I craved mental respite. So it seemed like providence when my Instagram Explore feed began to feature unexpectedly soothing videos of people poking their fingers into containers of cheerfully coloured slime.

Slime videos are the only-slightly-less-ridiculous spawn of 1950s B-movie The Blob starring Steve McQueen; once you enter the slime universe, it seems to expand before you like the flickering vortex in Tron. There are thousands of slime accounts, some with fewer than twenty followers, some with more than 200,000. The origins of the slime community are murky, but the practice appears to have begun in Indonesia and Thailand and then spread to North America, where it’s been growing exponentially since June 2016.

In a video by the popular slimer @chou.deco (89,000 followers), a white ramekin appears to be filled with a margarine-like substance. A set of bird-like fingers dip into the goo, which yields satisfyingly to the touch. The disembodied fingers continue to poke, then grab a chunk of slime, stretch it out and return it to the bowl, mixing it back in. In another video, the slime is a creamy white and looks as though it’s been splotched with orange and pink food colouring. As the fingers mix the slime, the colours are subsumed until it comes to resemble a tequila sunrise.

Part of slime’s appeal is that it is endlessly customizable. Slime can resemble a pastel blue puff of cotton candy or a tub of crude oil. There is fairy princess slime containing beads and glitter, frothy slime with a surface covered in bubbles, and crunchy slime called floam, which contains tiny Styrofoam beads. Instagram user @audeezslime (151,000 followers) gives her creations evocative names like grape bubble gum, pink lemonade, peachy bubbles, and blue Powerade. She dubbed a red container of floam “pomegranate seeds.”

Geraldine Cassidy, a slimer from Singapore who goes by @slimecrime.co (1,000 followers), suggests that slime is popular because the ingredients are cheap, easy to make, and kids love it. Similarly, Samantha Baker, a nineteen-year old from Massachusetts who runs the popular @honey.guts slime account (72,000 followers), credits her experiences mixing slime in the second grade as inspiration for her current hobby. “Now that it’s just blowing up, it brought back all those childhood memories,” she says. Indeed, much of the appeal of slime is predicated on regression to childhood. It’s the 2016 version of an adult colouring book; a satisfyingly childish pastime that allows us to indulge in escapist fantasies.

There’s something quintessentially retro about slime. You Can’t Do That On Television, a Canadian television show that first aired in 1979, was the original program to feature unsuspecting kids being assailed with buckets of slime. Later on, Nickelodeon’s game show Uh Oh, which ran from 1997-2003, featured an S&M fantasy character called “The Punisher” pouring a bucket of slime on each contestant’s head if they answered a question wrong. In The Secret World of Alex Mack (1994-1998) the titular character gets hit by a truck full of chemicals and is left with the superhuman ability to turn into a puddle of slime. And who could forget when Robin Williams cemented his turn from Lenny Bruce-inspired comedian to peddler of family comedy pablum with the 1997 flop Flubber?

“The ultimate gauge for a slime video to be successful is whether or not it is satisfying,” says Merray Gerges, co-founder of Crit Paper and editorial resident at Canadian Art. Their popularity fits into the same vein of Things Organized Neatly, first a Tumblr and then a book, which features viscerally satisfying pictures of objects arranged in painstakingly perfect configurations, and objects fitting perfectly into allotted spaces. We seek out satisfaction as a form of stimulation, like a cat being scratched at exactly the right place behind its ears. Gerges claims that because slime is difficult to quantify (it oozes, it has no boundaries), the satisfaction we get from slime itself is also difficult to quantify. “Slime is a non-Newtonian fluid, with this seemingly infinite amount of stretch. There’s this tension when you watch, ‘when is it going to snap, is it ever going to snap,’” she says. Gerges notes that there are many more genres of the satisfying video on Instagram, including kinetic sand being sliced with knives, bath bombs fizzing in hot water and the endless, repetitive motions of factory production lines.

When I watch a slime video, it triggers a sharp shiver that starts in my neck, runs downs my back, and ends with a gentle, pleasant buzzing in my head. This feeling could also be called Auto-Sensory Meridian Response (ASMR). ASMR is a burgeoning psychological concept describing the feeling of a “braingasm” or full-body shiver, typically occurring in response to sounds. The “triggers” for ASMR are as bizarre as they are variable: anything from videos of pages rustling, whispering, or hair brushing to role-playing doctor’s visits can activate the feeling. Since the videos tend to induce relaxation, they’re being touted as a way to manage anxiety and treat insomnia. A Reddit subgroup dedicated to ASMR counts over 120,000 subscribers.

“LOL a hate account for people who mix glue.”

Slime isn’t easily identifiable as an ASMR trigger because the appeal is primarily visual rather than auditory. (Most slime videos retain their gooshy sounds, though it’s fairly easy to scroll through them without sound; some are overlain with K-pop soundtracks.) However, Emma Barratt, one of the co-authors of the only academic paper that exists so far on ASMR confirms that the phenomenon can occur without any sounds at all. “I’ve also spoken with individuals who seem to have tingles triggered by certain styles of architecture with repetitive structures,” she says.

In terms of why we seek out these videos, Gerges’s response is blunt: “Because a lot of people are fucking neurotic!”

Austin Radcliffe, the artist and curator behind Things Organized Neatly, attributes the popularity of his blog to the fact that “we’re really bombarded with news feeds and images and [his] blog seems to be a place where people find some calm in their day.” To him, Things Organized Neatly serves as “the antithesis of the chaos of the internet and our daily lives.”

For something so soothing, a shocking amount of anger and hatred gets hurled around in the slime community. Anything more than a cursory browse reveals that the people responsible for making these soothing videos are no stranger to toxic feuds and pile-ons. There’s even a “drama” account, @slimeconfessions (7,000 followers), where people go to air their grievances and often jealousy of other slimers. (Example: “slime king really gets on my nerves so much, his videos are horrible…and its just overall a bad account sorry.”)

Cassidy suggests the reason for most of the drama stems from age. “Many accounts are run by adolescents, mostly from the ages of twelve to fifteen. They do not know how to run a business professionally,” she says. Baker echoes this sentiment, noting that the majority of the slime community consists of teenage girls, which she describes as “a recipe for drama and disaster.” She says, “A lot of these people aren’t doing it because it’s a hobby or passion, it’s just because it’s trending.” One of the comments on a @slimeconfessions post puts it into perspective: “LOL a hate account for people who mix glue.”

On a Sunday afternoon in November, I visited five separate dollar stores and pharmacies in search of catharsis, a.k.a. a simple bottle of Elmer’s School Glue, one of the key ingredients for brewing your own batch of slime. The instructions, using the first recipe available on Google, were fairly simple: Mix a half cup of school glue with water in one bowl, dissolve a teaspoon of borax with water in another. But the Borax refused to dissolve properly, and as soon as I poured the school glue solution into the Borax, instead of a puffy cloud of banana milk slime, I had mixed together a bowl of viscous nightmare fluid. It was ropey and gelatinous, the texture of fresh mucus. It didn’t stretch and yield beautifully when I squeezed, but merely broke apart and regrouped. It was the literal opposite of satisfying. I had imagined that actually getting to touch the slime would elevate me beyond the realm of ASMR into FIMR (Fucking Insane Meridian Response). Instead, all I was left with was a bowl of cold disgust. Never again would I trust a group of well-manicured fifteen-year-olds with a small section of my happiness.

In that moment, it occurred to me that perhaps it was the slime videos, and not the slime, that was the point. When you watch a slime video, just for a moment, the outside world ceases to exist; When everything feels overwhelmingly bad, it’s good to have something foolproof you can turn to, to soften the blow. Slime yields to the human touch. To watch a substance bend and mold and be shaped by human hands is a reminder that not everything is futile—that human beings can have a visible impact that might even be positive. Not everything has to be shit. Some things can be slime. 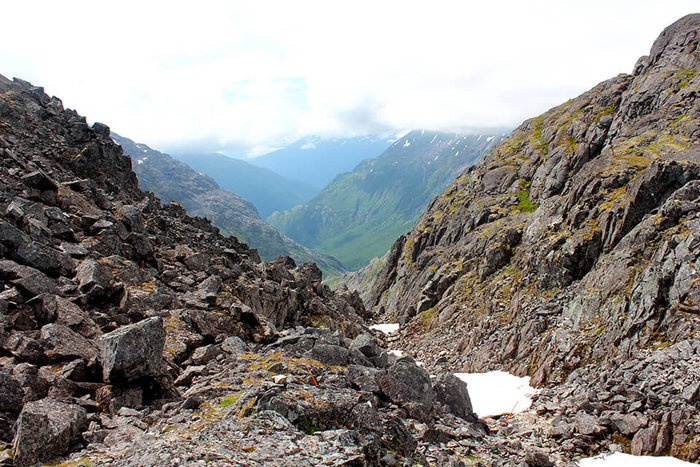 Travel
Holiday on the Icy Golden Hell-Staircase
Thousands of Gold Rush prospectors climbed the Chilkoot, and many lost their lives. In the grand tradition of Dark… 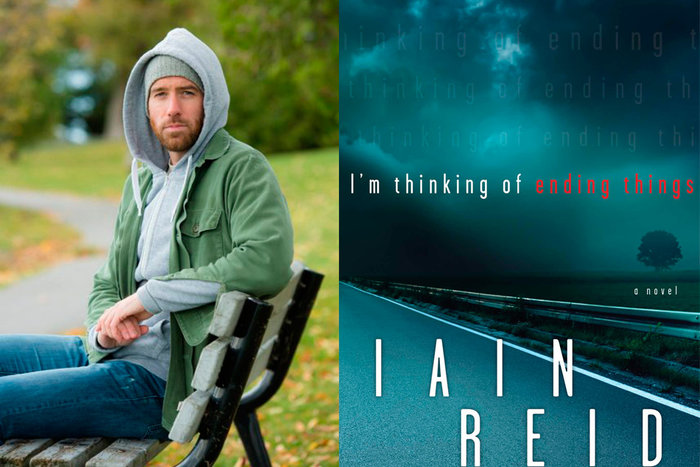 Interview
‘Stop and See How Much Darkness There Is’: An Interview with Iain Reid
Talking with the author of I’m Thinking of Ending Things about the move from memoir to fiction, capturing the…

‘You Should Wear It Because No One Else Is Wearing It’: An Interview with Christian Allaire
Isabel Slone
The Year Inside and Out
Naomi Skwarna