Sometimes I think I can identify men who have daughters.

Ian Williams
IAN WILLIAMS is the author of Personals, shortlisted for the Griffin Poetry Prize and the... 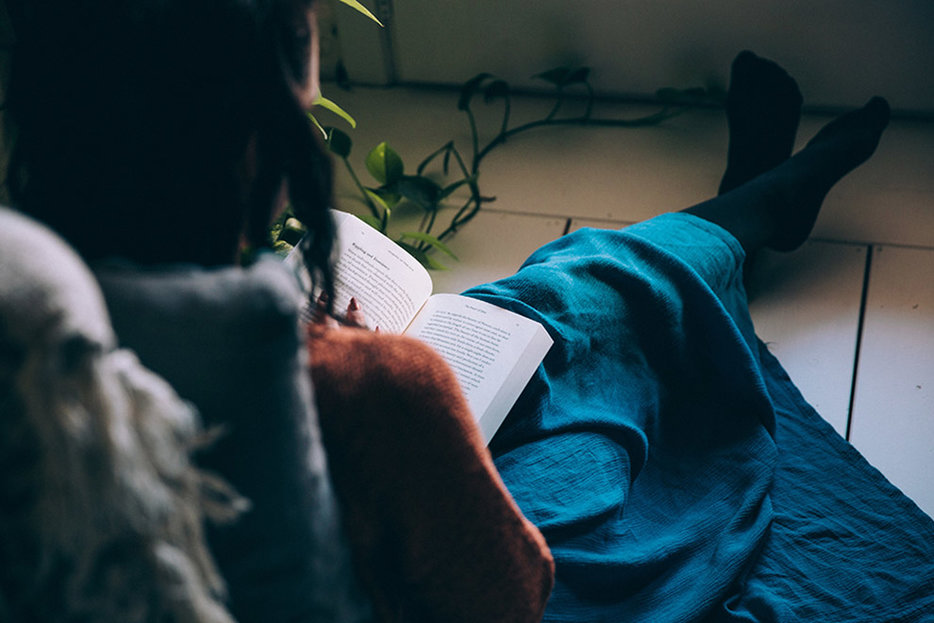 We were supposed to leave the house at 3 p.m. to walk to the mall but Catherine was slouched on a desk chair, totally absorbed with her phone. Not even a trip to the mall could get her attention. Her father, my friend, Moon, put on his tough-father voice, but she could tell that he was just putting on his tough-father voice so he was soundly ignored. I was watching the whole scene play out. I felt like I was behind a two-way mirror, observing a live demo of parenting. Daughter vs. Father: An Epic Battle to Leave the House. Moon got behind her and rolled the chair toward the door. She resisted by making herself heavy. Then he went away for a while.

Moon and Catherine were vacationing with me for a week. Catherine’s mother couldn’t synch up her vacation time so she was back in Korea, working.

When Moon returned to the room he was pinching Catherine’s shoes between his fingers. I thought he was going to issue another order. Instead he crouched down in front of Catherine. He held her foot between his knees, opened the flap of the shoe, put her feet in, adjusted the tongue, tightened the laces. Then he did the same with the other foot.

I’ve seen my brother kneel and pull on his daughter’s sneakers as she held on to his shoulder for balance. She was a toddler at the time. Catherine is almost a teenager, the age of the ideal TaylorSwiftDuaLipaBTS fan. Yet here was my friend—a forty-five-year-old man, a man with whom I’ve been friends since our twenties, pre-marriage, pre-children—genuflecting before a girl on her phone. Whither went the person I knew who played videogames and drank until his neck went red? From whence did this other self emerge? Wherefore was this new man so tender?

When Kobe Bryant and his daughter died in a helicopter crash, #girldad trended on Twitter. An effusion of tweets, images, and video poured out of fathers and daughters. It was an atypically bright moment on Twitter. Fathers cradled newborns, fistpumped during birth-announcement parties (which is a thing, apparently). Some posted images of ultrasounds.

I didn’t mention that Catherine is my goddaughter. In fact, Moon let me name her Catherine. I have a niece and a nephew and other godchildren but no children of my own so hashtags like girldad make me weirdly moody. I feel like I’m living in the unit below a happy family. Sometimes when I hear the happy-family footsteps above me, I turn up the volume of my TV to drown them out. And other times I stop whatever I’m doing and let the little echo of their life reach me.

A daughter wobbles her bike down the street while her father holds the camera. #girldad

A father takes a selfie while teaching his nervous daughter to drive. #girldad

A father and a daughter tan side by side in the backyard. #girldad

A father with a goatee and eyeshadow poses fiercely next to his daughter. #girldad

A daughter and a father hold the arms of her trophy. #girldad

Catherine might have giggled at the initial sensation of her father putting on her shoes but almost immediately she was oblivious again, lost in her phone.

I’m not sure how much thought Catherine has given to her father’s life, whether she asks about the semiconductors at work or the quality of his hotel in Tel Aviv. Does she want to know what he was listening to in summer 2007? That was the summer his company sent him to Boston. I’d crash at his hotel during the week and he’d spend the weekends at my condo. During the long evenings, we drove around New England with our windows down, listening to the radio and looking for promising lakes to go fishing. Two songs were in heavy rotation: Gnarls Barkley’s pulsing hit “Crazy” and John Mayer’s pouty hit “Daughters.”

Catherine was under six months old at the time. Yet her father and I were in my Honda, already singing about the moment when he would kneel before her and put on her glass sneaker: Fathers be good to your daughters.

When strangers ask about my book, I sometimes joke: It’s called Reproduction; I literally wrote the book on reproduction.

No one has quipped back, Bit premature, no? Given your childlessness.

Truth is, whether we have them or not, men of child-siring age think a lot about children. The desire for children is not solely the domain of women.

A daughter benchpresses while her father spots her. #girldad

A daughter on a boat holds up her catch by the mouth. #girldad

A father embraces his daughter in her retro prom dress. #girldad

A daughter feeds her father from her bottle. #girldad

Another time we were trying to leave the house while Catherine was deep into a graphic novel on the couch.

She made a sound without opening her mouth. She stretched out in the body-forgetful way of almost teenagers, totally passed out into the plot.

She sat up, turned a page, and flopped over in the other direction. She was in reading bliss, so near the end of her book.

This time I intervened.

Just let her finish, I said. I sat next to her and started reading my own book.

She always does this, Moon said. But he was secretly pleased to see such a strong resemblance between his daughter and her godfather.

I’m not sure how long we were like this, Catherine and me, reading on the couch together. Moon must have taken out the trash. I lost track of him until I heard the front door open and his coat rustling in the foyer.

How was it? I asked her.

She nodded big loopy nods. So good, she said.

Then Moon held open her coat and she sprung up and pushed her arms into the sleeves as if stepping into herself and we went wherever we were going.

A father and his two daughters bounce into the living room to perform a cheer routine. #girldad

A husky father practises an upbeat dance routine alongside his limber daughter. #girldad

The same father attempts to plié at a portable barre beside his daughter. #girldad

I have a photo—but I did not post it—of a father putting on his daughter’s shoes. #girldad.

A few weeks later, when they were back in Korea, spending a lot of enforced social-distancing family time together, Moon sent me a photo of Catherine, unsmiling, with her hair braided into a dozen long plaits, holding up a gang sign, and looking very goth and gangsta. She had now officially stepped into her teen years and overnight had reinvented herself from a saccharine K-pop star to Billie Eilish.

Who braided her hair? Probably Catherine herself or Catherine’s mom. Maybe a friend. But I’d like to imagine Moon doing it. It’s possible. I’ve seen my brother braid his daughter’s hair. She sat between his knees with a toy while he worked through her hair with a comb and some detangler.

Sometimes I think I can identify men who have daughters. There’s usually a little dimple of evidence that marks them whatever the context. Such men listen carefully to younger female colleagues; they wiggle during a pop song; they touch the leaves of a plant; they wear their birthday gift even if it doesn’t match their style; they back away from chit chat with obnoxious men; they might not be able to tie elaborate knots but they can recognize a French braid. These men were not Neanderthals before fatherhood, but I reckon they weren’t always so mindful. So while I can’t credit fatherhood for socializing or civilizing them, it does seem to have refined them.

Now that Catherine is officially thirteen, Moon’s worry seems to be, Is she going to leave the house like that?

And, in a few years, inevitably, it will be: Is she going to leave the house?

At some point, daughters drive down the street, car loaded up, while their fathers stand in the driveway waving, becoming smaller and smaller in the rearview mirror when they look back, if they look back at all.

At the security checkpoint in an airport, as her parents were returning to India, my friend tucked her sari between her legs, bent, and touched the feet of her parents. She didn’t explain to me what she was doing. Wikipedia says the gesture is called charanasparsha.

I myself, as a grown man, have knelt before my mother to buckle the tiny ankle strap of her suede heels. I remember the prong had to go into the fourth punch hole for both tightness and comfort. Wikipedia calls the gesture I’m-zipped-into-this-dress-and-I-don’t-want-to-put-my-glasses-on.

In a few decades, when Moon is absorbed in reading Semiconductors Digest and Catherine calls him from the front door to go to his doctor’s appointment, will she walk to his recliner with his shoes in her hand?

Ian Williams
IAN WILLIAMS is the author of Personals, shortlisted for the Griffin Poetry Prize and the R 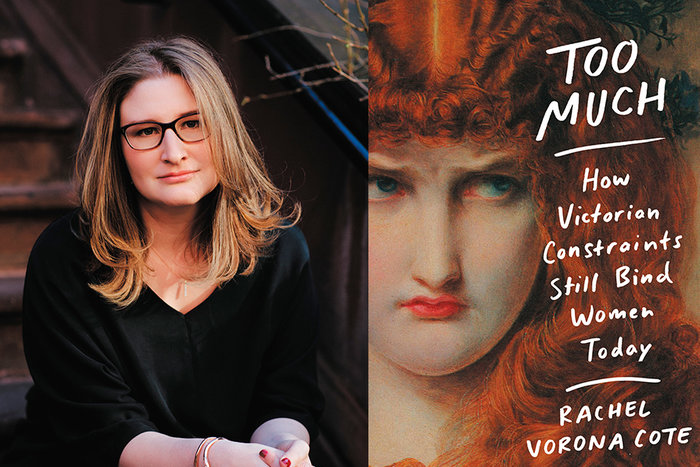 Interview
‘There Are Pernicious Trends and Ideologies That I See Enduring’: An Interview with Rachel Vorona Cote
The author of Too Much on who gets to be excessive, whether Victorian protagonists would get along, and the privilege… 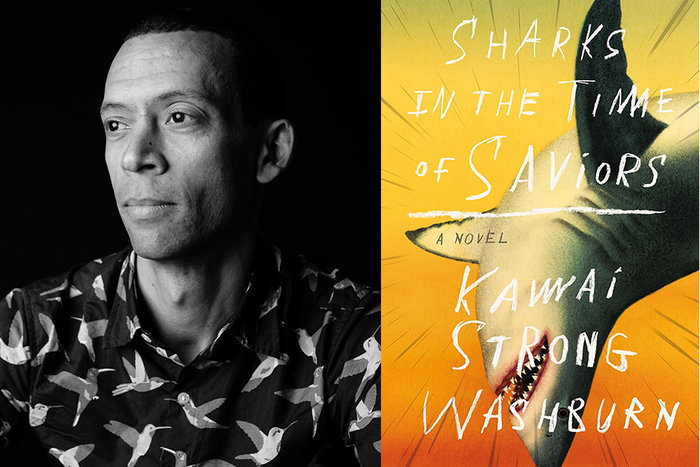 Interview
‘A Conversation That Happens Across Space and Time’: An Interview with Kawai Strong Washburn
The author of Sharks in the Time of Saviors on mythmaking, magical realism, and the hero complex.