‘It Was Just Joy’: An Interview with Nicole Pasulka

The author of How You Get Famous on Brooklyn drag, RuPaul, and genderfuck.

Amelia Schonbek is a journalist who has written for...

Early in How You Get Famous: Ten Years of Drag Madness in Brooklyn (Simon & Schuster), Nicole Pasulka’s chronicle of ten foundational years in the Brooklyn drag scene, a nascent queen called Merrie Cherry hosts her first party at a Williamsburg dive. Onstage, performers cover themselves in fake blood, strip, and break furniture while lip-synching to Björk and Éric Serra. This is not, in other words, your grandmother’s drag show. “Merrie had busted open the doors of Brooklyn nightlife,” Pasulka writes, “and invited the amateurs in.”

Those amateurs, and the experimental, messy, expansive scene they created in Brooklyn in the early aughts, are the heart of Pasulka’s book and the root of her interest in drag. She follows a handful of performers as they fight their way onto the tiny stages of grimy Brooklyn bars “in search of attention, cash, and adventure”—and the chance to truly make it as a contestant on RuPaul’s Drag Race. Along the way, Pasulka makes the case for drag’s unique ability to constantly redraw the contours of identity and mess with expectations. She spoke with Hazlitt about her path into the world of drag.

Nicole Pasulka: When I was a kid, in the 1980s and ’90s, we had no cable. But we got one station that played this music video program called The Box every day. It was fuzzy and black and white and you could only kind of tell what was going on. But I remember seeing RuPaul’s “Supermodel” video, which was released in the early ’90s. It’s her sort of vamping around New York City, obviously in full drag, singing a song about being a supermodel. I remember seeing that and being like, whoa! Wait, what? That’s a man, but it’s also a woman. It was all very mysterious how this person existed. I remember being so fascinated. I remember feeling like I thought the world was meant to be like this and look like that. And the idea that it could be different was very intriguing and very exciting.

After you moved to New York, did you have a moment of realizing, “Oh, now I’m living a life where I can explore this world?”

Every year, the Friday before Pride, there’s a drag march from Tompkins Square to the Stonewall. It’s a lot of radical faeries, a lot of people who are long-time residents of the East Village who dress up in their most inventive DIY finery and march across Manhattan to sing “Somewhere Over the Rainbow” in front of the Stonewall. That’s where I was like, “Oh, this is the spirit of RuPaul’s genderfuck,” more so than the drag I saw in the bars, which prior to 2010 felt a bit old fashioned. I found it incredibly liberatory.

Eventually you developed your own drag persona. What did that open up for you? Did it shape your interest in eventually writing about drag?

In the early 2000 in New York, there was a lot of lesbian community, a lot of lesbian nightlife. My experience of that scene was that it was pretty earnest: it was about being out and proud and representing yourself in the most easily identifiable ways. Being queer was about figuring out who your quote unquote authentic self was.

What I discovered along the way, and especially when I started paying attention to drag and getting more into the radical faerie community and gay male nightlife, was that there was this other thing that really appealed to me, which was playing with characters. Camping it up or being intentionally tacky or outrageous and finding parts of yourself through that, too.

So, I had a drag persona who was an eighteen-year-old straight guy who rode a skateboard and did graffiti and was kind of your classic dumb pretty boy. He wasn’t exactly failing upward; he was good-natured, he was never unpleasant. That was really fun because people could interact with that persona and I could express some desires I had, or whatever. None of it was serious. I eventually got bored of him because he wasn’t very articulate. But I think I started to realize that the experimentation, the play with identity and gender and personas, was a form of narrative. And it had all of this potential to make things less heavily determined, which was something that I felt like I really needed.

Hearing you talk about it makes me realize how few opportunities there are in the world to experiment in that way.

Totally. I think when you feel you occupy any kind of marginal identity, a lot of the focus becomes about being understood: clearly communicating who you are and advocating for yourself and making sure that you’re seen. That is all right and good—it makes sense. But I think it can crowd out a really enjoyable type of play that can remind us that none of this needs to be as serious as it is.

And, you know, I hate to be that guy, but capitalism also rewards a certain type of clarity, a clearly communicated persona. To be a person who has an easily summarized identity, attitude, politics, whatever—we benefit in our jobs, sometimes in our relationships, in our families, on our social media profiles. You know what I mean? It’s rewarded. It’s also in some ways really unfulfilling. When you start to fuck with that, to disrupt that, to try to think of other ways to show people who you are, suddenly it’s this exhale, this relief. Because the reality is, it’s all to some degree an affectation.

It always sounds glib when you say it, but the notion that you can be whoever you want to be—there’s a way in which that is totally not true. But it is still meaningful that a person can make up a character and of their own volition, just put it on stage and work it out. Some of the best drag out there is going to remind you that all of this is a facade.

You write in the book about a performance that the drag queen Sasha Velour gave in 2015 in which it feels like she’s messing with the type of facades you’ve been talking about— “the constraints of beauty standards and the expectations placed on female sexuality.”

In that performance, Sasha is a Gollum-esque type feral character performing Britney Spears’s “I Wanna Go,” and being hunted by two backup dancers in khaki safari outfits who capture her and turn her into a pop star before she eventually breaks free and sort of mauls them.

Sasha was really interested in exploring monsters, you know? Monsters are expressions of our greatest fears. They’re also the outpouring of our cruelty. They are things to be controlled, but they have this power—there are all these tensions.

Drag is really good at tethering high concepts to a lowbrow sort of pop culture. When you do Britney Spears, you are specifically playing with what many people think is the most vapid pop there is, but finding, actually, the idea—the self-expression and the manufacturing of it. To be clear, I don’t think Britney Spears is the most vapid pop out there by any means. But there’s an understanding that you’re going to get a completely formulaic, perfectly designed innocuous pop song. And you can project your own cultural criticism onto that story. The fact that drag is often working in the realm of pop songs is not accidental to both its popularity and why people find it such a good place to explore weird ideas.

When you started thinking about taking on all of these questions by writing about drag, was there a world of similar books in which you saw this one fitting?

I’ve been writing about queer people and LGBT issues for at least ten years, maybe longer. And I always felt it was as relevant to our cultural moment as something like tech or sports. But there’s this idea that queer culture is distinct from straight culture and that LGBT issues are distinct from broader issues in health care and employment and relationships and whatever. Which always seemed to me just rooted in homophobia. So I wanted to write a book that’s on the level of something like Friday Night Lights but is about people who generally just don’t get that level of consideration within literary journalism.

The assumption is that if you’re writing a queer book, it’s going to be for a queer audience.

The idea of a “queer audience” is just as constructed as anything else. Take a book like Random Family. Many people who read that book don’t have the same kinds of experiences that the subjects of that book have. But more broadly, we all exist under the same institutions, in the same broader culture. There’s no real reason you couldn’t read and appreciate and understand and empathize with the stories that are in that book. Or, what do I have in common with a hedge fund manager, right? But I still want to know about their work. I want to know how they make decisions, what motivates them. The notion that you would only want to read about gay people if you’re really out and involved in the queer community is frankly ridiculous and supports this really false distinction between gay culture and straight culture.

Of all of the performances you watched during your reporting, are there any that are especially close to your heart?

One of the most spectacular, exciting things I’ve ever seen is a queen called Horrorchata perform Selena’s “Como la Flor” at the Brooklyn drag festival, Bushwig, in 2018. She was in these lavender crushed velvet bell-bottoms. Stunning. But it was really just this moment—the sun had fully set. The crowd was at capacity. People were fucking hype. She co-founded Bushwig, this is her show. And she’s so devoted to Selena.

People don’t talk enough about something drag does really well, which is how it can take the context and the emotion and the vibe of a song and repurpose them or reinterpret them, you know? It was this moment of someone expressing their passion and their individuality, but also connecting to community. It was just joy: joy from the audience, joy from her, joy from Selena’s singing on the recording. For people who don’t participate in the drag scene, it’s sometimes still baffling why people like this shit so much. This is why.

Amelia Schonbek is a journalist who has written for newyorker.com and The Walrus. She was previously the associate editor of Maisonneuve, a Montreal-based quarterly of arts and ideas. 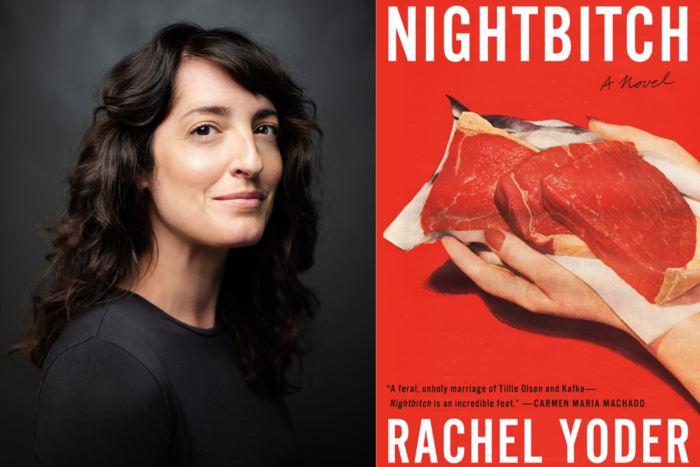 Interview
‘Underachieving Can Be an Act of Profound Self-Care’: An Interview with Rachel Yoder
The author of Nightbitch on anger, needy toddlers, and writing as emotional exorcism. 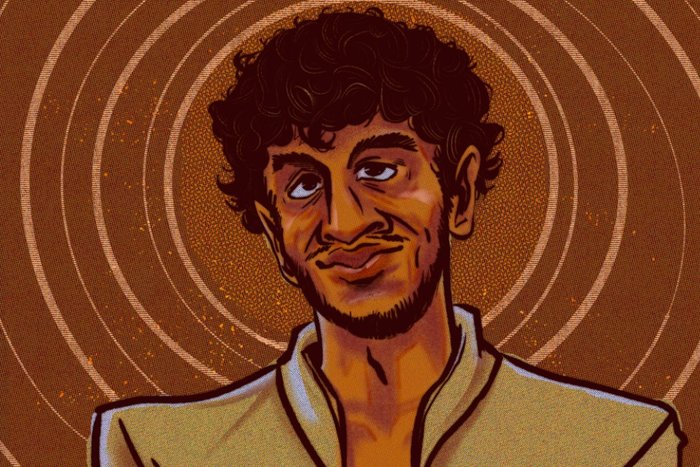 Column
That Arrested Moment: On Stills in Film
I’ve always believed that a carefully chosen frame makes for the more appropriate film poster.