In our second dispatch from IFOA, Isabel Greenberg bring a comic to life, Xiaolu Guo wraps us up in language, and Anne Carson talks about Krapp Hour.

It’s an exciting bill, and I say as much to a writer friend when he plunks down beside me in the front row. We agree that we’re both looking forward to this panel, and the room is still filling up so we’re not alone in our enthusiasm. We may, however, be alone in thinking that we’ve attended a panel. I take a look at the stage, and see that despite the six names in the program, there are only two of those ubiquitous black leather chairs. Soon enough Rodge Glass, who’s hosting and moderating so many events that he makes a crack about how many times he has to give the same housekeeping speech, takes to the stage. It is, of course, a reading event. There is not going to be a Q and A. We have signed on for an hour of back-to-back readings. I realize with a sinking feeling I should have sat in the back, where I could have politely snuck out if my ears got tired toward the end.

First up is Isabel Greenberg. She’s reading from her graphic novel, The Encyclopedia of Early Earth, and we can read along, because the pages she reads from are projected behind her. She cracks about how strange it is to read a comic aloud, and in fact this is only the second time she’s ever done it. The stories she reads are all stories within stories, beginning with two lovers who for reasons of magic realist polar magnetism can never quite touch, and so they talk by the fire about an imagined old crone splitting a boy’s soul three ways, who in turn tells a story about a grandma who has to tell stories to a giant lest he eat her. “There might be some partial nudity on the next page,” Greenberg warns us. She gets a laugh—her small, girlish, British voice like something remembered out of childhood, a kind of Matilda or Madeline making magic come to life before our eyes. She smiles and her hair falls into her face as she steps down. It’s an impressive start.

Introducing the next reader, Glass has to make an edit to the author’s bio he’s supposed to read. Since it was written, presumably months ago, Eleanor Catton has won the Man Booker Prize. When Glass says as much, at least one person in the crowd gasps.

Catton leans on the podium, and seems nervous as she ums and uhs through a context-providing description of The Luminaries. Suddenly I realize she’s not nervous—she’s probably exhausted, having spent the last few days travelling and giving interviews. Nonetheless, when Catton puts her glasses on and opens her book to read, she’s the picture of poise. Her voice is clear and lilts, belying the agitated nature of her winding sentences. She takes us through a scene in a bar, where men size each other up and the narrator weaves in and out of proximity to the people being described. Long, circuitous sentences spread over the prose like a welt raised by after a too-deep scratch. Two men are discussing a murder—or is it two murders?—and everyone in the room had something or other to gain from the mysterious end of a least one’s person’s life. “We have to look beyond our own part in this design,” one bar patron says to another in Catton’s ringing voice, “trace it back far enough and you’ll find an author, one of a piece.”

“My reading is going to be fragmented,” warns Xiaolu Guo as she steps up to be our next reader. Her voice is sonorous, and reverberates through the room. She tells us a little about how her first novels were written in Chinese, and how her relationship to her later, English language work is a little different. She reads a translated piece about a fable that occupies the collective mind of a fishing village in China, her narrator reflecting on being the same age as the heroine of the oft-told tale. Her opening remarks, about deciding to write in English shortly after moving to England a decade ago, about her loneliness for the intellectual community enabled by language, set up her second reading incredibly well, as she chooses to read from A Concise Chinese-English Dictionary For Lovers. The book, she says, was written as she learned the language, and she jokes that it’s really bad English. “Deliberately, according to the media,” she adds, and we all laugh. “Everything very confusing right here,” she reads, her narrator arriving at Heathrow and bemoaning that the place isn’t called something simpler, like London Airport. Guo turns to a later section, where her narrator’s facility with a strange new tongue has improved. Her narrator has written a love letter, describing the extra-lingual pleasures of her body given over to another person’s touch. But it becomes clear that we’re all wrapped up again in language, the thing that makes our thoughts, the system of understanding that is the conduit for meaning. Guo charms the room, and then her work bites the tongue it’s written in.

Joanna Kavenna is put in the unfortunate position of following the only reading at IFOA that gave me a reason to write the words “holy shit” in my notebook, and her wandering new story that imagines Google Earth as an internalized dream can’t quite live up to what’s preceded it. My ears are starting to tire, and I look at my watch and see that the hour is up but there’s still another reading ahead.

Marisha Pessl, the once wunderkind behind Special Topics in Calamity Physics, closes the event. It’s ungenerous of me to think that she seems slick and rehearsed, that the lines she reads from Night Film comically borrow from not even the oiled noir tradition of prose but rather some loose idea of it, but I think it nonetheless. It sounds like she’s going for something smoky, but her voice is maybe too practiced for the words themselves—a necessity for the book tour circuit, but an effect that perhaps keeps the work from crackling with the intended vice. As she reads about women in red under streetlamps, women with mouths that are like axe-gashes in tree trunks, I’m thinking—no offense to Pessl—mostly about how badly I need to get to the bookstore, how much I want to be bitten again and again by A Concise Chinese-English Dictionary For Lovers.

The line is so long and the lobby is so small and we’re all here to see a poet who is improbably famous but very deservedly beloved. As soon as I take my seat in the dark theatre, I notice a who’s who trickling in, authors and publishers and poets of all stripes have come out tonight to hear Anne Carson do her tricky thing with antiquity, with language.

Helen Guri begins the evening by stating that it is her “knee-shaking pleasure” to introduce Carson, who has been admired so frequently in the press, and who is known for her charisma. When Carson comes out, looking like quite an Annie in close-fitting slacks, a comically large tie, and a big long blazer, she deadpans that just this morning her brother informed her she has, in fact, no charisma at all.

It would seem that poets make excellent liars, and the truth of the fact is revealed as she enchants the big room for an entire hour. She begins with death, reading from an essay on reading Hegel at Christmastime because everyone she loved is gone. The sound of her voice filling the theatre is a contradiction—how can something that sounds so sweet be so crisp, so sharp?

While a few people laugh as Carson makes a wry quip or two, the general feeling in the room is that of occupying some sort of sacred space; even someone like me, who has admired a line or a phrase once or twice but never paid much sustained attention to Carson’s work, can feel how the room has turned from theatre to church.

“I’ve just finished writing a TV show,” Carson says. “It’s called Krapp Hour. None of the major networks have picked it up, but I have all hope.” We laugh gently through her explanation of the premise: it’s a talk show where Samuel Beckett’s character, Krapp, hosts guests and chats them up. “Here,” she says, “he’s interviewing Helen of Troy.”

The medium is shallow, late-night talk show, and Carson takes us deep enough into it that instead of scraping the bottom we come out the other side and into the past. She reads the names in the script, and instead of seeming like punctuation, the words “Krapp” and “Helen” take on the tenor of our collective hearts beating. While they chat about Troy and rivers and lies, we hang suspended between Krapp and Helen, waiting for the low beat of Carson reading their names, as if to reaffirm ourselves, yes, we are still alive.

Her pages rustle on stage, the mic picks up the papery sound, no one makes a move. There are no coughs or twitches. She reads a short bit from Autobiography of Red, setting us up for some selections from Red Doc>. When she gets into the new book, she tells us that “so much of human cruelty is simply incidental,” and we know it to be true.

There’s a strangeness in the way that Carson makes vowels sound—they filter in coldly, bundled up and tight, rather than generous and round. Her mouth hardly seems to move, though her eyes keep darting up and off the page. “Perfection sounds round,” she reads, but given the particularities of her own voice the opposite is true—perfection, unlike cruelty, is not incidental. And it’s not round the way a mound of snow is, the way a talk show set is a proscenium, the way a theatre curves around a stage. It’s sharp, pointed, the improbability of a vowel sounding hard as it spills out of a mouth.

A few questions come from the audience, though none have the sticking quality of sitting in the dark and feeling a force that can’t be seen, but that apparently can nonetheless be spoken aloud.

Culture
Into Exile: Exploring Literary Kazakhstan
It was the Siberian site of the Russia’s gulags—a remote region for those in exile or seeking safety. But with… 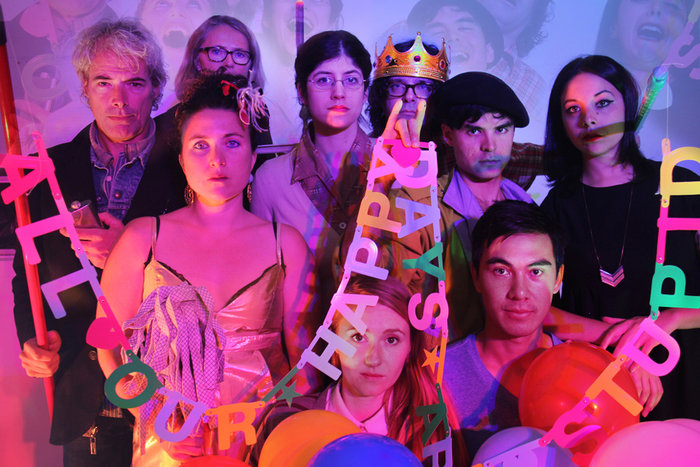 Culture
Overcoming the Perils of Community: On All Our Happy Days Are Stupid