Overcoming the Perils of Community: On All Our Happy Days Are Stupid 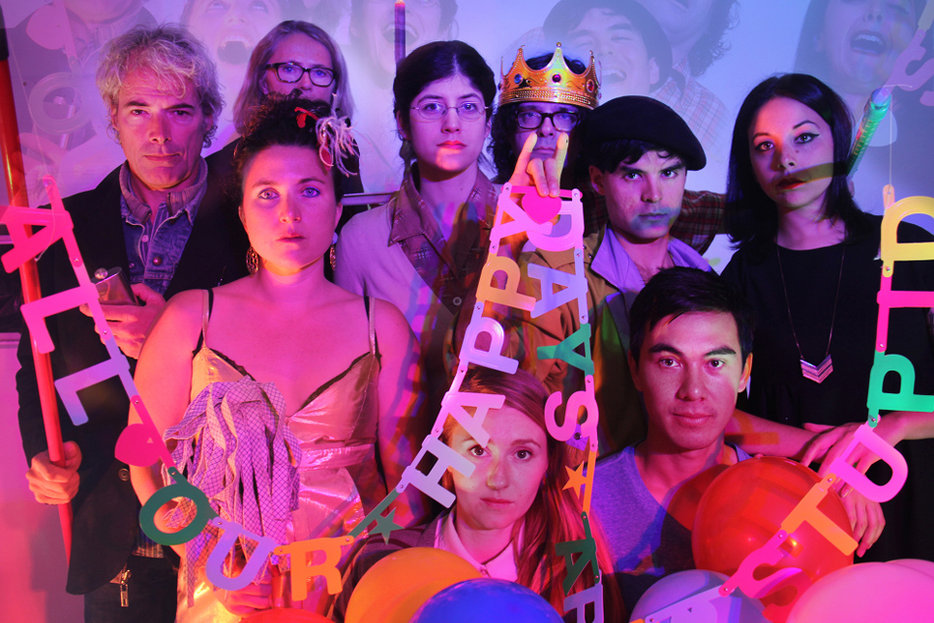 Toronto is a peculiar size. It’s big enough to accommodate a good arts scene with interesting people doing interesting things, but small enough that “arts scene” is an appropriate handle: musicians know artists know playwrights know poets, etc. Our city grows by the tens of thousands each year, but there’s still a small-town residue of affinity among people with a general taste for the arts. Which means that if you are not from Toronto and you meet someone from Toronto at a show—any kind of show—it’s totally appropriate to ask whether they know Jim from Toronto Who Goes to Shows.

This is partly a good thing. It makes for less stratification across disciplines and levels of success. The city is a bungalow: people do big things here, and garner praise elsewhere, but as far as I can tell, “making it in Toronto” just means that more people ask you for favours. Maybe you get free shoes. The Toronto arts are sociable; there are cliques, but if you hang around enough, people will talk to you. In other cities you can be not invited. In Toronto at least no one will kick you out.

I’ve been here long enough that I rarely see the good anymore, although I can always see the bad. When “DIY” is entrenched as an aesthetic as well as a means, people get lazy. The Canadian preference for lower stakes, combined with our infamous passivity (aggression tends to manifest in Facebook rants about funding bodies), can lead to kind of a safe-word mentality within the arts. Cool stuff happens when no one cares who’s watching, but people are watching us now (though not as much as we’re watching them watch us), and there’s a nether region between total naivety and just owning it. Even so, Toronto can be really parochial. People tend to make stuff for their friends.

My feelings about Toronto are something like spousal indifference. But All Our Happy Days Are Stupid, a play written by Sheila Heti (it’s the one she can’t finish in How Should a Person Be?) and directed by Jordan Tannahill made me think differently. I am utterly biased: three cast members are regular Hazlitt contributors and one of them is a close friend. But the creators are biased, too: the cast members are friends of Heti and Tannahill. All of them are in the arts, but not all of them are actors. Even the audience—both rows of it—was familiar; I doubt that any two people in the room were more than one degree removed from one another. The performance space, Videofag, is a storefront in Kensington Market. The set consists of white stools, and all other props are drawn in black pen on white cutouts. It was a very Toronto production, but for once I don’t mean that pejoratively.

I could go on and on about how excellent the performances were and how much I enjoyed the play—the story of two families on vacation in Paris, and the fallout after a child goes missing—which has merits far beyond what I’m talking about here and you should definitely go see it if by some magic you can manage to land a ticket. But my praise is meaningless, and something else was happening, anyway. Just as affecting, for me anyway, was the spectacle of familiar people transforming entirely, and of people from a world I know inhabiting another world they made together. It was and wasn’t community theatre, which is my point: it takes a lot of magic to convince people who know you that you’re someone else, to make a familiar neighbourhood seem otherworldly.

From where I sat—about two feet from the stage—AOHDAS took all those risk factors inherent in community and made them assets. And it gave me a rare and particular feeling, that of finding new wonder in something beloved but now mundane. Regardless of audience, I think that’s the point: invoking particular feelings, and reminding us that the world is interesting.

Dispatch
IFOA 2013 Diary #2: Anne Carson’s Krapp Hour
In our second dispatch from IFOA, Isabel Greenberg bring a comic to life, Xiaolu Guo wraps us up in language, and Anne…

Society
The Benefits of Obsessing Over Serial Killers
Maintaining a casual fascination with serial killers is macabre and almost entirely unnecessary, but it may actually…