‘I Wanted to Find a Way Out of Realism’: Maren Ade on Toni Erdmann

The director of the Oscar-nominated comedy on her interest in role-playing, her love for Andy Kaufman and the fate of a particularly memorable piece of costuming.

Adam Nayman is the author of It Doesn’t Suck: Showgirls, published by... 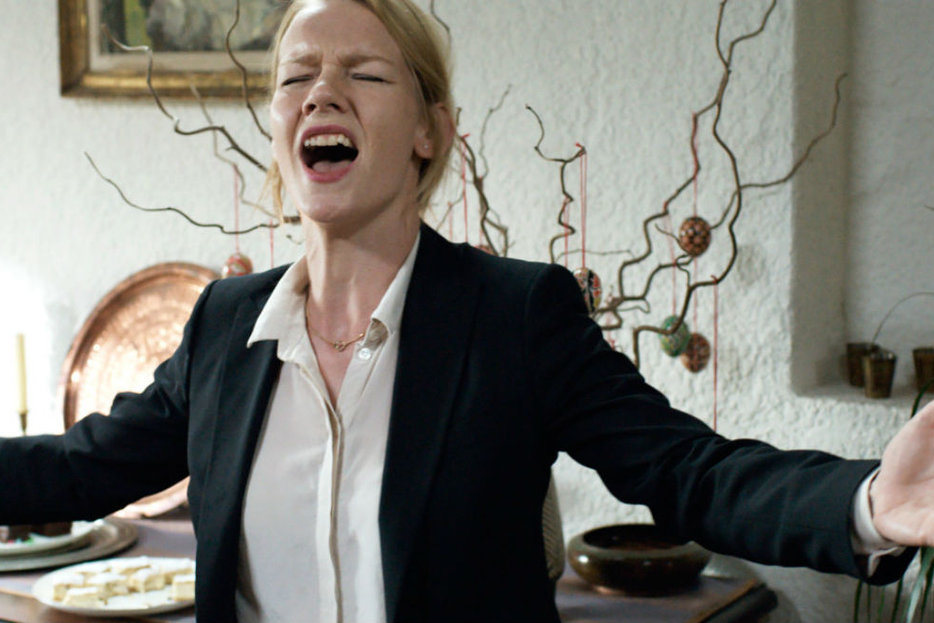 For a vast majority of viewers, the new and critically acclaimed comedy Toni Erdmann represents a breakthrough for its director, Maren Ade, a 41-year-old Berliner who isn’t quite a household name in Germany, much less North America. For some of us, though, the highest compliment that we can pay Ade’s third film—which is nominated for Best Foreign Language Film Oscar—is that it lives up to the brilliance of her first two features. 2004’s The Forest For the Trees, isa low-budget cringe-inducing study of female friendship that layered awkward humour onto the skeleton of a Single White Female-style psychological thriller. 2009’s Everyone Else places a vacationing hipster couple under a fine-grained microscope not simply to dissect their individual and mutual faults but to locate the empathy and insecurity underneath their narcissism.

Toni Erdmann is more accessible than its predecessors, but it’s palpably the work of the same comic intelligence: its story of an addled corporate consultant, Ines (Sandra Huller) suffering through two extended visits from her father Winnifred (Peter Simonischeck)—the second with him in the guise of the fully invented and wholly ridiculous “life coach” Toni Erdmann—pivots on the same flashing, white-hot feelings of fear, shame, and weaponized affection as Ade’s other work. Ines’s irritation at being stuck a few rungs beneath her talent on the professional ladder gives the film an underpinning of feminist critique, and there is a political dimension to the script as well: her gig is basically that of an efficiency expert with hundreds of employee’s fates hanging in the balance. The question of whether or not Ines is authentically heartless hangs over the action alongside the mystery of Winnifred’s doppelganger act. Does he become Toni Erdmann—he of the shaggy wig and Richard Kiel-grade false teeth—because he wants to ruin his daughter’s life or to save it? Or does his alter ego’s shaggy, sweltering ridiculousness reveal something to him about himself?

I spoke with Ade about her interest in role-playing, her love for Andy Kaufman and the fate of a particularly memorable piece of costuming.

Adam Nayman: Why are you so interested in embarrassment?

Maren Ade: It doesn’t start with that. It’s that I’m interested in power dynamics between people. In every situation, I try to come close to how the characters are really feeling, which is sometimes in what they don’t say—what they actually want, and which doesn’t happen. There is a constellation of power, and it can lead, maybe, into those feelings of embarrassment.

In your other films, you have embarrassment between friends or lovers; here, it’s between family members. Which is strange because, in theory, you are supposed to be able to say or do anything around your family…

Family is a big, embarrassing topic! Showing people where you come from tells them a lot about you. For Ines, in her world, it’s a big thing to do that. When I did the research for the film, I didn’t just ask people about their jobs. I also asked all of these consultants how it would feel if their families suddenly showed up at their place of work.

It’s clear in the film that somebody in Ines’s position is not supposed to have a personal life. By working in this corporate context, she eliminates all traces of an identity.

In a job like this, you have to pretend to be somebody else. You can change a lot of things about yourself in life, but you can’t change where you come from.

All of your movies are about performance, it seems, and even though it’s Winnifred who is more overtly “acting” when he becomes Toni Erdmann, Ines is “performing” as much as he is, or maybe even more.

It seems to be my topic, this role-playing between who you are, and who you could try to be. Whenever I start with a film, I have the characters first, and with Ines, I wanted to have this female character who was never really herself, and in every social and professional situation, she’s playing a role. The consultant job is a role, being a daughter is a role… even being somebody’s girlfriend is playing a role in a way. That’s why, later in the film, in the naked party, when she’s just lying there on the bed, it’s an important moment, because she’s just being herself.

She’s like a great improv comedian, because she doesn’t break—she never once publically calls her father out for not being who he says he is.

Yes, she is definitely her father’s daughter! I like the idea that she’s got the same energy, and that she takes things over in the same way that her father does, like in the sex scene in the hotel room. She’s trying out all of these things, but they can also only happen when her father isn’t there. With him there, joking all the time, there’s no space for her to be funny herself.

Even when he is present at the end, it’s in disguise. The way that the film gradually drifts into surrealism, culminating in that costume, is really quite extraordinary, and a big change from your earlier work.

I wanted to find a way out of realism. Realism is something I won’t be able to change in my work, because it’s a law for me. I need the things that happen in my movies to be possible things. But they can also be unlikely things. The character of Toni Erdmann opened a door for me. With Winnifred inventing Toni, everything was suddenly possible. I just had to go through the door.

I know that you’ve talked about Andy Kaufman as an inspiration, and what’s interesting about him was that he was a cult comedian who somehow found mainstream success: he was very weird but also very famous.

He was popular, but what I liked a lot, and what I thought was very radical, was how he was hiding himself. He never wanted to show who he really was. That was the thing with “Tony Clifton.” Kaufman stayed in character so much that he denied that he was the other guy. He said “I don’t know who that is.” And Andy Kaufman didn’t like Tony Clifton either.

Toni Erdmann is nearly three hours long. That is long for any movie, but especially for a comedy. Was this something you were worried about?

Well, 120 minutes can feel long too. I didn’t want it to be this long. It just happened. I tried to make it shorter, and then I saw that it needed to be boring in between the surprises. It’s a simple thing that I discovered. For example, right before the karaoke scene, they are all painting Easter eggs. Whenever I shortened the egg-painting scenes, the singing wasn’t as funny afterwards. You needed to see them get from A to B to C. It seemed necessary to me to be that precise.

I appreciated that the movie doesn’t fake or phone in all the non-comedy stuff, like Ines at her job. It’s very easy to just approximate that material, but you make a point of fleshing it out, which is another example of the extreme realism in your work.

That was another discussion that we had [about shortening scenes] but it’s Ines’s world. And if we want to say something about her world we need to understand what she’s doing. The business scenes, where she’s doing the presentation, are the parts where I did the most work—I had to research it and understand it for myself. I had to find a project that was complicated but not too complicated for a movie, where you can understand what it means.

Ines and Winnifred/Toni are both very complex roles, and the performances have to balance seriousness and comedy for the duration. How did you approach directing your actors?

For Peter (Simonischeck) there was a lot of work. He’s a very good actor, but he had to play a normal person who is acting. That’s a thin line to walk. He could have made Toni a lot funnier. We had to see how far we could go while keeping him a real person, even when he’s inventing things as Toni. You don’t see it now in the film but there was a lot of work in figuring that out. For Sandra, and really for both of them, there is the surface of a scene—staging and dialogue—but then there’s this whole thing underneath. We did a lot of variations from take to take and wound up with a lot of footage.

How many times did Sandra Huller sing “The Greatest Love of All?”

I think it was twelve times. We did it like eight times first with her singing the song as if she doesn’t want to. That’s the worst thing I could have said to an actor. It didn’t work. We did a version during rehearsal that we called the “Las Vegas version,” just for fun. Then we came back to that version at the end, because Sandra had been very unhappy with how it was going. She said “I’ll do Las Vegas now.” And we were like, wow.

It seemed to me that the song was chosen because it’s what Ines might have listened to as a little girl. It doesn’t appear to be the first time that she and her father have done this performance.

I wanted there to be that association, for sure. Like she had forced him to play it a lot before, like, “Daddy, play it again!”

I want to ask you about the Kukeri suit that Winnifred puts on at the end of the movie. It’s such a striking and specific image, and it seems to sum up a lot of what the film is about: this big, mythic father figure dwarfing and engulfing his daughter. Was that costume always in the screenplay?

It was always there that he chooses a costume from the region. But there is a lot of luck involved in filmmaking, and it was great luck that we found this costume. Someone came from the village with a white one, a brown one, and a black one, and we could choose.

Where is the Kukeri costume now?

It’s in our office. It’s stinking like hell. You can go to Bulgaria and buy one yourself. It’s difficult to find one, though. It’s made of a lot of goat fur, long-haired goat. That’s why it feels so real.

Adam Nayman is the author of It Doesn’t Suck: Showgirls, published by ECW Press. He teaches cinema studies at the University of Toronto and Ryerson and is a contributing editor for Cinema Scope and a staff writer for Reverse Shot. 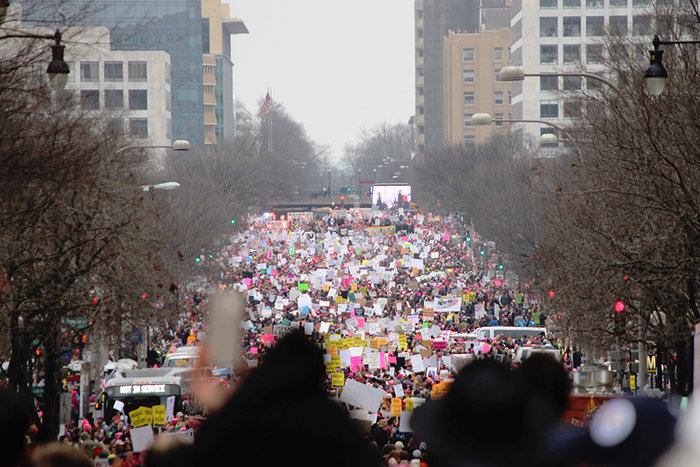 Politics
The First Two Days of the Next Four Years
Scenes from the inauguration of Donald Trump and the Women’s March on Washington. 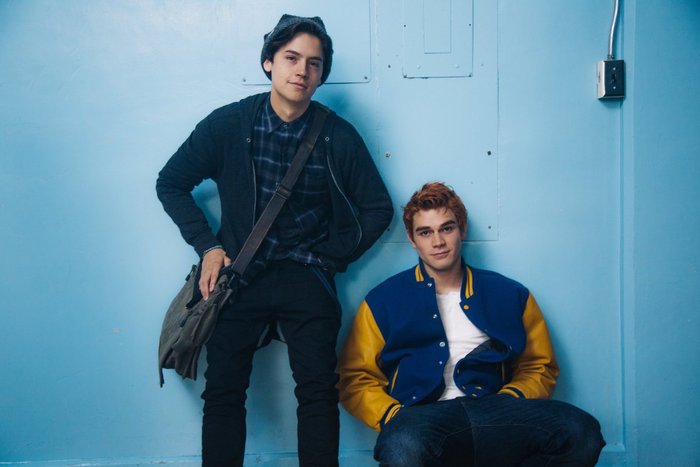