Growing up with the goddess figure as part of my South Asian tradition means I have a complicated relationship with repurposing the term as a symbol of female empowerment.

Aparita Bhandari is a Toronto-based journalist. She has contributed to ... 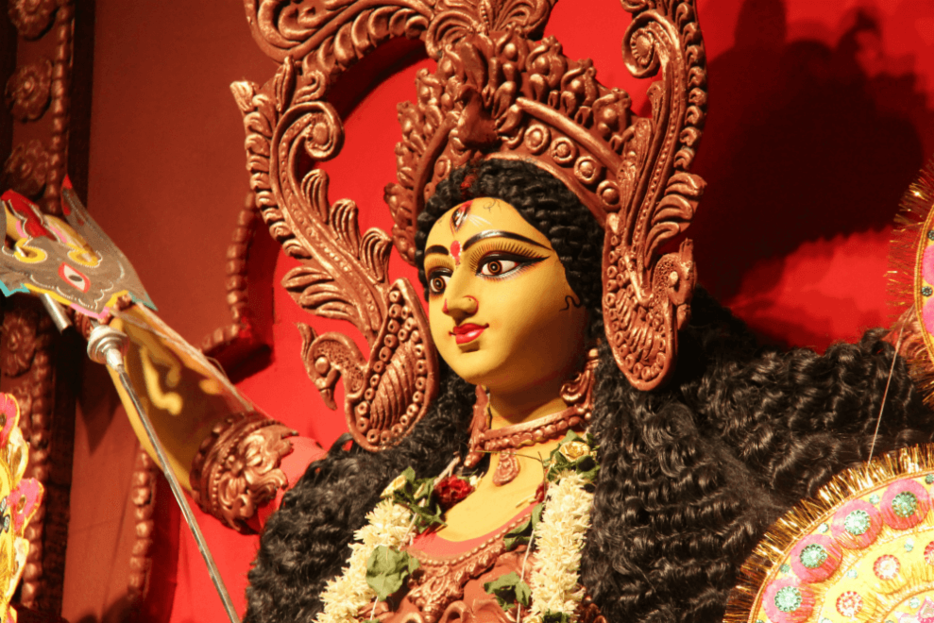 I grew up praying to the goddess daily. Every evening, around 7 PM, my father, a devout Hindu, would ring a tiny bell. It was the signal for the family prayer sing-a-long. Although I didn’t yet know I was an atheist, and disliked the daily drudgery of singing monotonous hymns in praise of the Hindu gods that decorated our home altar, it was an escape from the even more mundane math and writing exercises that my father assigned every evening.

I was enthralled by the idea of singing the praise of a female deity. I didn’t understand all of the Hindi dialect used in the hymn, but I got the gist of the verses.The song speaks of a goddess with bright eyes and a golden-hued body decked out in red who wears earrings and a pearl nose-ring, and is radiant like many suns and moons. She rides a lion, holds a sword and skull in her hands, and is called upon by men and gods to get rid of their grief. Shiva, the lord of destruction himself, dances to her tune.

The image of Durga, trident in hand, astride a lion, smiling serenely while killing the demon Mahishasur is commonly found in many Hindu households, as well as places of work and worship. It’s used to represent strength and capacities of a woman. Kali, also known as the Dark Mother, sprung from Durga’s brow is a little less ubiquitous but popular with feminists. She is depicted as dark-skinned, her tongue sticking out, long black hair loose, scimitar in one hand, a decapitated head in another, one foot on the chest of Shiva. Her iconic imagery is often used as shorthand by South Asians to suggest an awesome, in the true sense of the word, female power.

To a young woman growing up in a relatively conservative household, chafing under the constant don’ts that accompany being a teenager, the hymn to Gauri sounded radical. Anytime I, or other women I knew, flew into a rage, it was said, somewhat jokingly, Usse Devi chad gayi hai/The Goddess has possessed her. The myths of goddesses such as Durga, and Kali, told stories of fierce women whose help is sought when men, and even the male gods, couldn’t do the job. I held on to those stories, full of vivid descriptions of impetuous and headstrong women, which seemed to mirror my own mini rebellions against what I had generally labelled the patriarchy.

A similar thought process was behind the Goddess movement that became popular in North America, parts of Europe, as well as Australia and New Zealand in the 1970s, and continues today in many manifestations, sharing rituals with neo-pagan traditions such as Wicca. The Goddess movement grew as a reaction to a patriarchal worldview, centring its practice instead on goddess worship. There’s no central belief system, and followers usually find their own preferred goddess and rituals to practice.

Carol Christ came to the Goddess movement after spending much of her academic life studying the Hebrew Bible. Even while she was attending graduate school in theology at Yale in the late ‘60s, she was uncomfortable about how she was treated—as a young pretty thing in a mini-skirt, she says. Reading theologians such as Thomas Aquinas didn’t help either.

“That whole man had a larger rational capacity, that a woman was of the body, it didn’t sit well with me,” says Christ, over the phone from Lesbos, Greece. An adjunct professor at the California Institute for Integral Studies, she’s also the director of Ariadne Institute, which offers annual goddess pilgrimages to Crete. “I was preparing my dissertation for my PhD and one night, it was late at night, I laid down and it just poured out of me. In my mind I was thinking, God, how could you? Why are women always secondary, why do we get raped and abused? Why didn’t you send us a prophet? Why didn’t you intervene?

The goddess is, ultimately, an unattainable paradigm. She’s a source of strength, yes. But steeped in symbolism, she is revered as a myth, not sought out in reality.

“And in my mind, I had the answer. That in God there is a woman like yourself. She shares your suffering. That history had been stolen from her.”

Christ’s involvement in the civil rights and anti-Vietnam war movements also took her further away from the idea of God as an old white man in the sky, sitting on a throne, a warring figure who ruled over men, women and nature. Neither was she impressed by Hindu or Greek Goddesses, who were also warrior figures, “sword in hand, fighting against demons.” Instead, Christ gravitated towards the idea of the goddess as a nurturing figure, giving and sustaining life.

The proponents of the Goddess movement borrow from the work of archaeologist Marija Gimbutas, famous for her research of prehistoric societies of Old Europe. In her book The Myth of Matriarchal Prehistory, Cynthia Eller, professor of religion at Claremont Graduate University, looks at the relationship between Gimbutas’s work and the spiritual feminist movement. Gimbutas directed several excavations in southeastern Europe, writes Eller: “Among the artifacts that these and other excavations uncovered were a wealth of female figurines which Gimbutas identified as goddesses.” Gimbutas’s theories are referenced by feminist matriarchalists as scientific proof that “prehistoric societies were woman-centred and goddess-worshipping, and destroyed only recently.” The many reinterpretations of this narrative also inform the writings of secular feminists such as Gloria Steinem, who have also made note of a “gynocratic age” that was eradicated by patriarchy.

A similar resistance to patriarchy also drew Vivek Shraya, author of She of the Mountains, to the goddess figures in the Hindu tradition. Shraya, a trans woman, was raised as a boy in a Hindu household in Edmonton. She was first drawn to male Hindu deities such as Krishna, with his long hair and many female friends, because of their gender ambiguity.

Over her career as an author and singer, Shraya has consistently tackled ideas around Hinduism. However, it wasn’t until writing She of the Mountains, which was conceptualized as a bisexual love story, that Shraya really engaged with goddess figures.

“I wrote a section called Parvati’s Song. For some reason, that image came to my mind, of Parvati creating her son Ganesh from her own body….I started exploring it more, and then I started thinking of all these stories I had heard of goddesses as secondary characters. And I wondered if we can write about the goddess through a feminist lens; not as a mother or a consort. Can we write about Kali on her own?”

Using the goddess figure to challenge societal norms is certainly an attractive idea. But it has its limitations. I have to admit, having grown up with the goddess figure as part of my South Asian tradition, I inwardly roll my eyes most times I hear casual references to goddesses as manifestations of female power in pop culture. The goddess is a powerful force in the Hindu tradition, but she is also seen as a maternal and sexual figure. She is Uma, the mother of Ganesha, wife of Shiva. She is Lakshmi, the goddess of wealth, but more importantly, the consort of Vishnu. She is also Mohini, a female avatar of Vishnu, an enchantress who tricks the demons out of the nectar of immortality.

She is, ultimately, an unattainable paradigm. She’s a source of strength, yes. But steeped in symbolism, she is revered as a myth, not sought out in reality.

In her critique, Cynthia Eller points out that claims to a matriarchal prehistory, suggesting that ancient, peace-loving cultures that worshipped the goddess until they were wiped out by warring, god worshipping invaders, do not serve a feminist agenda. Even if one overlooked the historical inaccuracies around the research used as the basis for these interpretations, and acknowledged that myths have their own powers, this version of the matriarchal prehistorical societies primarily saw the role of women as maternal, nurturing caregivers, celebrated for their feminine qualities. Eller further notes that “the conditions that we can reasonably imagine having existed in prehistory—foraging economies and goddess worship—do not necessarily produce societies in which women are honored and respected.”

That observation certainly hits home for me, as someone who has grown up in a culture that venerates the goddess. You’d think it would be easy to view the world through a feminist lens, given the many temples dedicated to Durga, Kali and Bhadrakali (another fierce manifestation of the Shakti, the female divine energy in Hinduism) that dot the Indian landscape, with devotees performing daily prayers that herald their divine powers to wipe out evil forces.

And yet, as Tracy Pintchman, professor in the department of theology at the Loyola University of Chicago, and author of The Rise of the Goddess in the Hindu Tradition says, “Nobody names their daughter Bhadrakali … Even in [the Indian province West] Bengal, a primarily goddess worshipping society, women are not necessarily seen as being in charge.” While Indian feminists regularly make the point that women don’t want to be deified, and instead would like equal rights, in reality women are seen as distinct from goddesses, adds Pintchman. “[Goddesses] don’t menstruate, they are seen as childless. Human women cannot be real goddesses.”

But I can also understand how Shraya sees reclaiming the goddess fits into her own feminist and brown agenda. She recently emailed me a New York Times photo essay on Mayana Kollai, an annual Indian festival in a fishing village in South India, where transgender women transform into the goddess for 10 days.

“I was so immersed in the patriarchal narratives of Hinduism, that it felt important to undo some of that for my own self. It feels very basic, but also very important,” she says. “Maybe it’s naive. Despite its problematics, people celebrating their inner goddess feels infinitely better than the opposite. At least we are not keeling over god. Because that’s what the goddess has given me. In rethinking the goddess, I have been able to rethink myself.”

As for me, I still sing the hymn to Gauri, whenever I get a chance. Recently, when my daughter Mallika discovered an image of Kali in my father’s altar and asked who she was, I told her the story of the fearsome goddess and her awesome power. My son Dax, too young to understand a story about warring demons and gods, wandered off. I am sure I will recount the stories of Lakshmi, Durga and Kali regularly to my kids for years to come, as we celebrate Indian festivals such as Diwali and Dussehra/Durga Puja that propitiate these goddesses.

But I’ll also tell them about other women who are symbols of power in their own realms—Beyoncé, Serena Williams, Frida Kahlo, Malala Yousafzai and Indian activists such as Vrinda Grover, Nivedita Menon and Flavia Agnes. I hope the stories of these mortal women will be just as inspiring as the immortal ones.

Aparita Bhandari is a Toronto-based journalist. She has contributed to CBC, the Toronto Star, The Globe and Mail, Walrus, Toronto Life, Chatelaine and Today’s Parent among other publications. She is often found singing the hymn to the Hindu goddess Gauri—under her breath—on public transit. 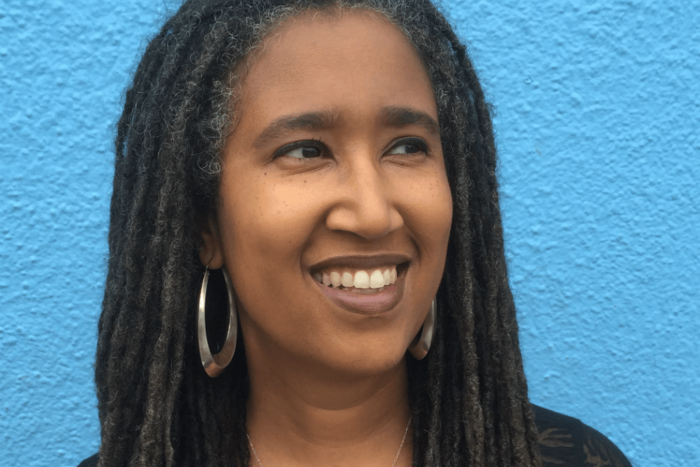 Interview
‘Men Who Exploit Women are the Ones Who Need Comeuppance’: An Interview with Aya De León
The author of Uptown Thief on sex work myths, fetishizing cash and the new golden age of television. 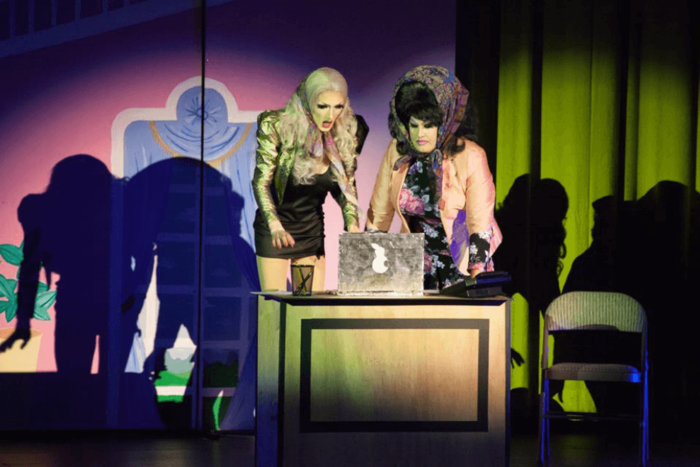 Culture
Just Enough Money to Pay For Our Eyelashes: The New San Francisco Drag
As artists are pushed out by skyrocketing rent, the city’s drag culture is threatened.