The End of Alaska’s Ferry Bars

On-deck taverns on the Marine Highway System bring together residents of a solitary state, but not for much longer.

Eva Holland is a freelance writer and editor based in Whitehorse, Yukon. Her work has also... 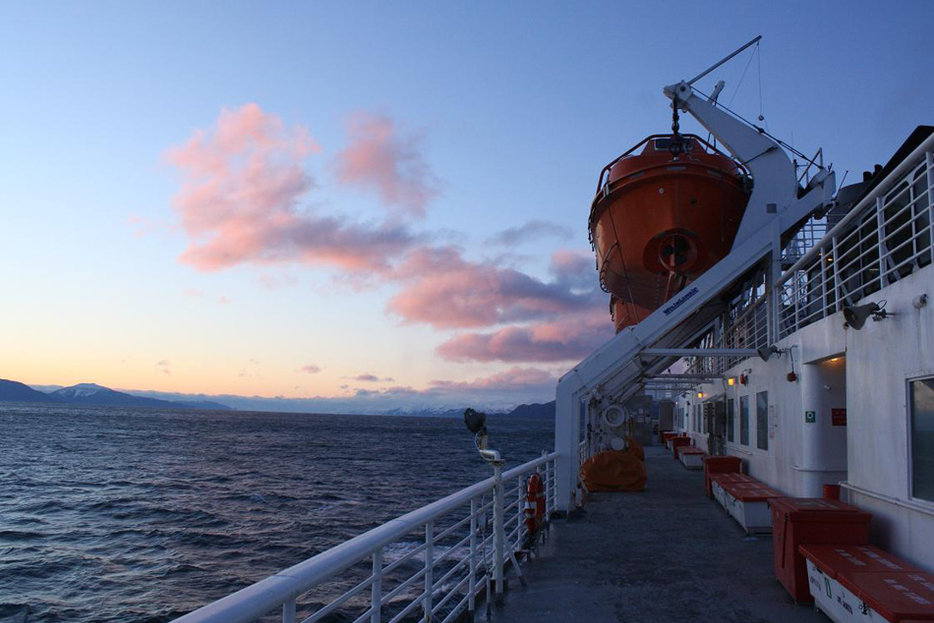 The work of Alaskan artist Ray Troll is ubiquitous in the Panhandle, that long thin slice of the state that sheathes British Columbia north of Prince Rupert. His website advertises “the fin art of Ray Troll”: In one illustration, mottled red-green salmon swim upstream with white-armoured Storm Troopers riding on their backs, the caption reading, “Return of the Sockeye.” Troll’s pieces appear on fridge magnets and T-shirts, posters and coffee mugs and bags of locally roasted coffee beans. In Troll’s hometown, Ketchikan, his swimming salmon are reproduced in giant scale on the sides of city buses. Even in my own home, Whitehorse, northeast of the Panhandle on the Canadian side of the border, Ray Troll is everywhere.

So when I sat down late last winter next to an older man at the bar on the MV Matanuska, one of the long-distance ferries in Alaska’s public fleet, I wasn’t surprised to see him wearing a T-shirt bearing a Ray Troll print. Then I caught sight of a Ray Troll bumper sticker stuck flat to the lid of his laptop, too. I made eye contact. “Big Ray Troll fan?” I asked him.

I had to laugh. It struck me as the perfect Alaskan moment, weird and random and unexpected: that I would meet a famous artist when we were both bellied up to a bar on a state ferry sailing north through the Inside Passage, and that he would be wearing his own work.

As I made my way through a pint of Alaskan Amber, Troll turned his laptop toward me and showed me photos of his latest obsession: a series of illustrations devoted to the Helicoprion, a prehistoric shark with its teeth arranged in a spiral, like a buzz saw. He’d been in Whitehorse recently, he told me, after I mentioned where I was from—he’d visited with the Yukon government’s palaeontologist, toured our collection of ancient bones. He showed me photos from that, too.

Then, after a while, he shut the laptop and climbed down off his stool. The bartender, another older man who seemed to know Troll well, came out from behind the bar. They both picked up instruments, settled down in chairs in the corner of the room, and started jamming. I listened awhile before retreating to my cabin for the night. The swells rocked me to sleep. 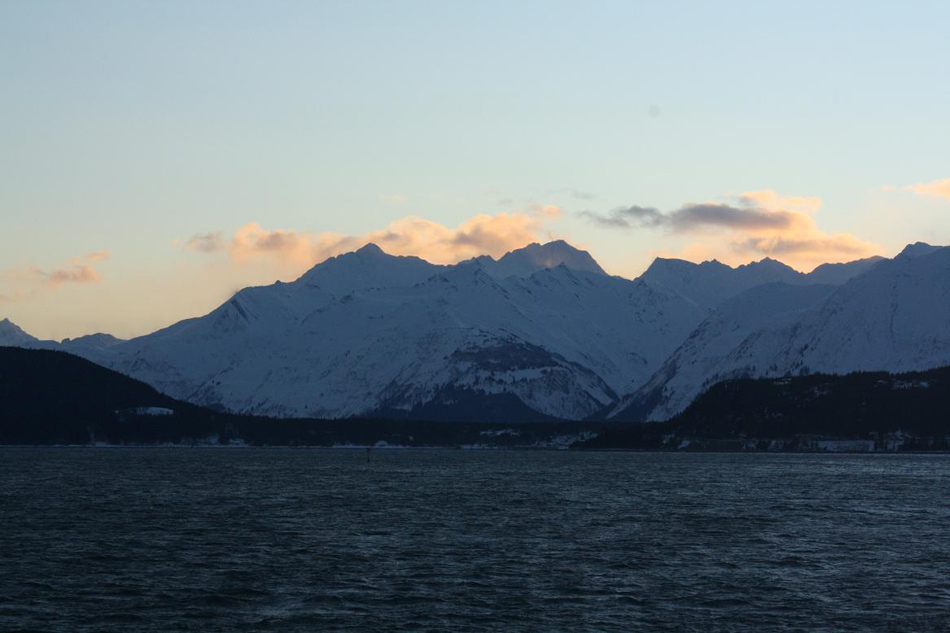 I’ve been thinking about that evening with Ray Troll ever since I heard the news, in late January, that the ferry bars will be shut down this spring. The plummeting price of oil, the state’s export, has left Alaska in cost-cutting mode, and shutting the bars—all of which operate at a loss—will, apparently, save $750,000 a year. (The savings come mainly from employee salaries; the unionized bar staff will be absorbed into the greater ferry work force in lieu of new hires this summer.) Some residents of the road-less towns, totally dependent on the ferries, worry that the cost-cutting onboard is a prelude to service cuts: fewer runs along fewer routes. But the government says that closing the bars will help to prevent exactly that.

The Alaska Marine Highway System is unique in North America: a network of ferry routes that links communities spread out across thousands of miles of ocean. It runs from Bellingham, in Washington state, up the B.C. coast to Prince Rupert—where it connects with the B.C. Ferries system—and on to nearby Ketchikan. It winds through the islands and channels of the Inside Passage, stopping in towns reachable only by boat or by plane: Wrangell, Petersburg, Sitka, Gustavus, and the state capital, Juneau. From the sheltered channels of the Panhandle it crosses the vast Gulf of Alaska to Valdez, the Kenai Peninsula, and Kodiak Island, before reaching west all the way to the far-flung Aleutian chain.

It might be the world’s most scenic public transport system. I first experienced it in January 2012, when I spent 10 days ferry-hopping throughout the Panhandle: gliding past snow-covered mountains during a late morning sunrise, snoozing in a sleeping bag below heat lamps set up on an open-air deck, and watching teams of high school athletes—sailing the legendary Inside Passage to reach their next away game—do their homework in the cafeteria. Then, last year, I rode the ferry from Bellingham all the way to Skagway, the northernmost port in the Panhandle and the closest Alaskan town to Whitehorse, just 180 kilometres away. It was a 78-hour trip, three days and change, and I spent most of it reading books and sleeping.

Despite the solitude and serenity of a long ferry ride—no 3G, no wifi, no need to do anything but look out the window for hours at a time—some of the best memories from both my ferry trips are social ones. Six of the state’s ships—the Kennicott, Matanuska, Columbia, Tustumena, Malaspina and the Taku—are equipped with modest saloons, and over the course of a long sailing they become community gathering places for the passengers on board: places where it’s perfectly acceptable to strike up a conversation with a stranger, where a bartender might tell you her life story, or a local celebrity might show you snapshots of his art-in-progress. A road trip is an inherently self-contained journey, but in the Alaskan ferry bars, everyone is open to some human interaction. We are all, literally, in the same boat.

My concerns about the closing of the ferries are more esoteric, and I suppose more selfish, than those of the residents who rely on the Alaska Marine Highway to reach the outside world. I worry about what is lost when a communal gathering place closes down. I think about all the yarns that have been spun over beers in the ferry bars over the decades, and the tales that will go untold in future. Alaska is a place where people value their privacy, their right to be left alone, and the ferry bars were one place where visitors could be guaranteed a chance to talk to Alaskans—and where Alaskans could emerge from their lives and talk to each other. I’ll miss the ease of conversation there—the sense that anyone could speak up, ask a question or say hello, without feeling intrusive or out of place. 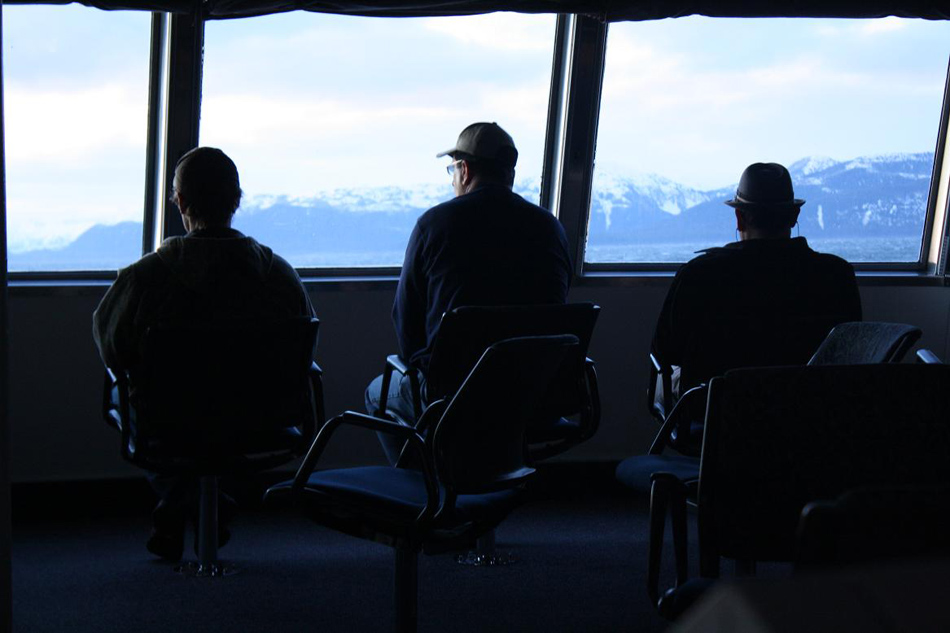 Of course, there are plenty of bars on land in Alaska, too, and I’ve found some of them to be just as friendly and welcoming as the ferry bars. The ships will continue to serve beer and wine in the cafeterias during mealtimes, so alcohol-as-social-lubricant will still be a possibility on board. Still, this feels like a loss to me.

I suppose, if the ferry bars have a lesson to teach me before they fade away, it’s this: Maybe we should all be less shy when we’re moving around in the world. When I see a man wearing a T-shirt that matches the bumper sticker on his laptop, or anything else that intrigues me, I should go ahead and ask him about it. If I don’t, I might miss the chance to learn all about a prehistoric shark with a jaw like a buzz saw—and who knows what else.

All photographs by Eva Holland.

Eva Holland is a freelance writer and editor based in Whitehorse, Yukon. Her work has also appeared in Smithsonian, AFAR, Up Here, Maisonneuve, and many other publications in print and online. 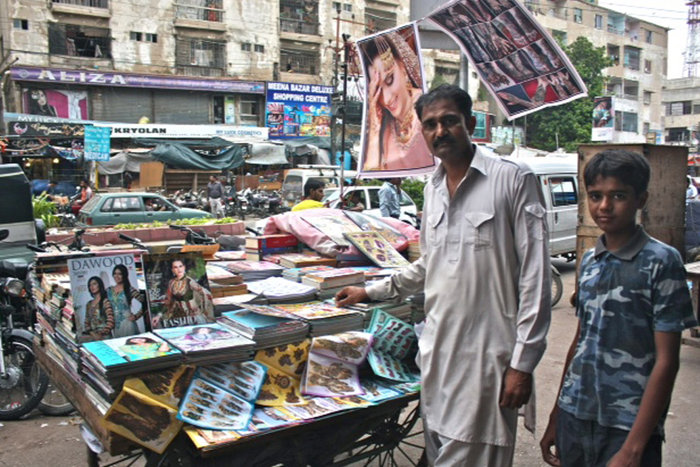 Society
‘You Can Burn the Paper, But the Stories Live On’
A day with the nomadic booksellers of Pakistan. 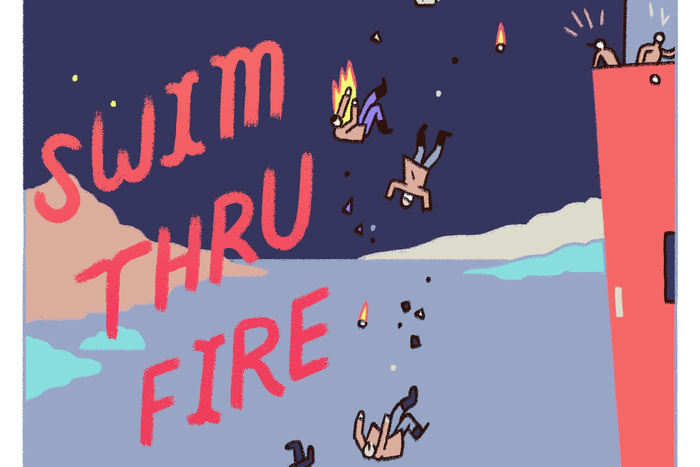 Comics
Swim Thru Fire Pt. 1
An accident aboard a research vessel flings two people into the ocean, but in the depths, they’re not alone.