At the Bleeding Edge of Language

The revival of The Four Horsemen Project uses dance, projection, and immersive sound to answer a call made by avant-garde poets 30 years ago. 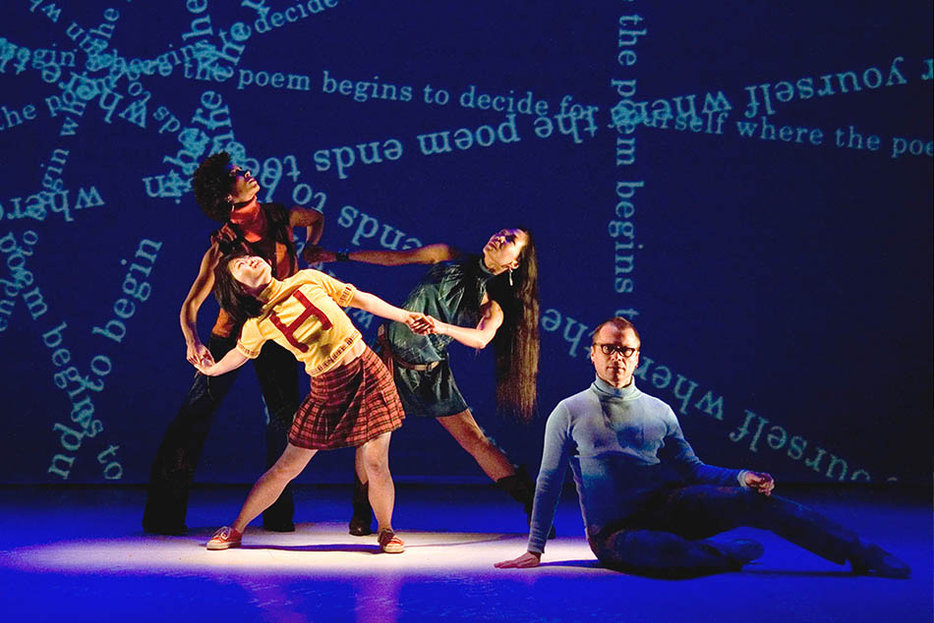 Sometime around 2000, director Ross Manson and dancer-choreographer Kate Alton turned on the CBC to the sound of a poem ringing with cries. Rapt, they thought they were hearing the hottest thing in radical performance from Europe, even though Stuart MacLean was not typically their source of radical anything.

The latest sound art from Europe turned out to be “Allegro 108,” a poem off of a 30-year-old LP recorded by four hippie Canadian poets; bpNichol, Rafael Barreto-Rivera, Paul Dutton, and Steve McCaffery, who wrote and performed sonic improvisations as The Four Horsemen.

“We stopped talking immediately and listened to the whole piece, wondering ‘what on earth are we hearing?’” says Alton, on afternoon break from rehearsing the upcoming revival of their theatre production The Four Horsemen Project, named for the mysterious collective behind that bracing radio signal.

“The idea that there was avant-garde art being made that we’d never even heard of, right here in Toronto, was mind-blowing” says Manson, who, as the artistic director of Volcano, has been making vivid, disobedient, and award-winning performances since founding the company in 1994. Alton is equally inventive, defining her own particular brand of dance with her company Crooked Figures, spanning the gaps between theatre, text, and philosophy.

Over the remains of their lunch, Alton and Manson lean apart and veer together as if magnetized, reminding each other of the moment that spurred them to collaborate on a work that both paid homage to—and answered—the call that The Four Horsemen had set upon them from 30 years prior.

The Horsemen were Toronto’s post-Woodstock poetry vanguard, a splinter group of exultant reprobates who bore down on bourgeois sensibilities with their protosemantic language and heavily fringed vests. They were a little bit punk before punk was a Martha Stewart birthday party; sort of Dadaist before Dadaism was a lecture you slept through during first year Art History. If there was a bleeding edge, these four men were screaming at it.

Now, nearly a decade and a half after hearing those bellowing shouts, Alton and Manson have returned to the piece with the original four performers: Jennifer Dahl, Graham McKelvie, Naoko Murakoshi, and Andrea Nann, girded by Bruce Alcock’s stunning 3D animations. They puzzle over the way feeling will be conveyed, especially in the meeting of sound, movement, visuals—and disruption of all three. Alton’s choreography playfully quotes dance pieces of the Horsemen era: Danny Grossman, Jerome Robbins, Christopher House, and David Earle—tributes within a tribute. Alcock’s fluid and space-defying projections echo and enhance both the voices and bodies of the performers.

Wearing its virtuosity lightly, The Four Horsemen Project opened in 2007 at the Factory Theatre, where it was beloved by critics and audiences alike. Held over and almost always sold out, it swept the Dora Awards and became one of those rare productions to secure an indelible reputation for itself, even in the minds of those who missed it (e.g. me), and have been waiting patiently for its return.

Creative process was different in Millennium-era Toronto, when Alton and Manson were first figuring out how to capture something as materially evasive as sound poems. Both development and performance turned out to be rigorous exercises in investigation.

“The Internet wasn’t really going back then,” says Manson wistfully. Thus, he and Alton set to hunting down cassettes, records, and transcripts from wide-ranging sources. One day at the now defunct Black Dog Video in Toronto, an employee helped Alton and Manson locate Michael Ondaatje’s 1970 film about bpNichol—The Sons of Captain Poetry, much coveted by only a rare few. As they were cashing out, the young woman—discerning that they were theatre artists—asked about how one could go about volunteering in the local scene. Upon learning that she’d just graduated from Queens with a degree in Canadian Contemporary Poetry and film, both Alton and Manson leapt. “What are you doing tomorrow?” they asked as she rang them out.

The next day, they put the clerk, Deborah Pearson, to work. Now a prominent UK-based theatre maker and founder of Forest Fringe, Pearson’s first real foray into experimental performance came via The Four Horseman Project. Collaborating with myriad international artists, she has been creating and facilitating new work ever since.

With Pearson and the assistance of the remaining three Horsemen—bpNichol died in 1988 due to complications from a routine back surgery—Manson and Alton pulled together a quantity of mostly ephemeral material. That included a set of rules meant to guide the improvised sounds that the Horsemen prized within their own performances. Those unique sounds, while difficult to document, made each reading distinct, aurally and emotionally.

“It tries to get at everything that text can’t,” explains Manson. “Sound is such a visceral conveyor of feeling, and we often overlook it in a society that’s really pushed towards left-brain thinking and empiricism.”

Manson opens a binder thick with documents and pulls out a gridded page filled with notations. “They [the Horsemen] would write charts,” he says, pointing to boxes and circles that signify the current performers’ trajectory. The poetry leads, vulnerable with sounds that can’t be scripted, discordant and harmonious at once.

“They’d riff on a sound written in a certain cell,” says Manson, as I attempt to parse the chart he hands me. “Then all four horses would move from left-to-right. It could be as simple as a vowel, or ‘growl a lot.’ Or scream.”

And how is a scream written?

“You can’t write a scream. You can only scream. And the sound of the scream conveys information that can be conveyed in no other way except screaming. Same with sobbing, or laughing. That’s at the heart of sound poetry.”

Alton nods in agreement, and the two look at each other silently, waiting to see if the other will speak.

The Four Horsemen Project plays at The Young Centre for the Performing Arts from Thursday November 6 to Saturday November 22. Conceived and co-directed by Kate Alton and Ross Manson; based on the poetry of The Four Horsemen by Rafael Barreto-Rivera, Paul Dutton, Steve McCaffery and bpNichol; choreography by Kate Alton; animation by Bruce Alcock and Global Mechanic; musical Direction by John Millard; dramaturgy by Ross Manson; lighting design by Itai Erdal; costume design by Cass Reimer

Presented by Volcano in association with Crooked Figure Dances and Global Mechanic. For tickets and information, click here. 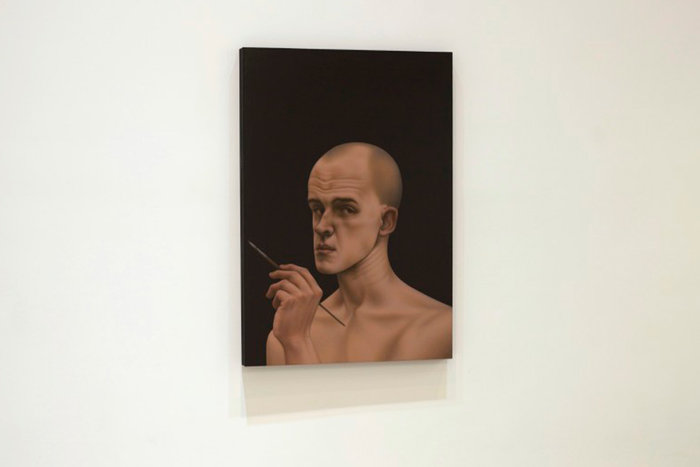 Art
Deconstructing Selfies
Matthew L. Miller’s “Can’t You See It, I Am One” gallery show is a challenge to—and rejection of—one of the… 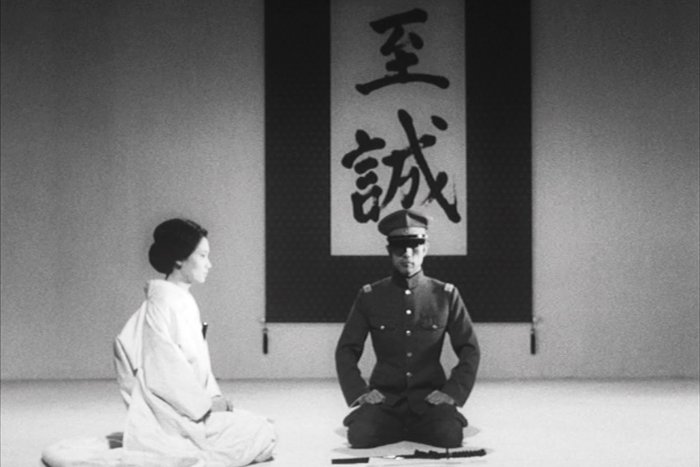 New Tabs
Understanding Sumo, Tiny Cats, and Being a Ghost