Why Doesn’t Drake Have A Nobel Prize Yet?

Malala Meets Obama
Last Friday, Malala Yousafzai, the remarkable Pakastani teenager who was nearly assassinated by the Taliban for speaking out for girls’ education, met with President Obama. During the meeting Malala asked Obama to stop drone attacks on Pakistan, arguing that education, not bombs, would end terrorism. So, what did you have to say about it?

“im sure Obama loved getting advice from a 16 year old .”

Fair enough. I mean, if there’s one quibble I have with Malala, it’s that she should have waited until she was, you know, a bit older before deciding to get shot in the head by the Taliban and becoming an inspiring symbol of hope for the world.

Over at CBS News, HIGHLYCRITICAL was even harsher, writing:

“I too agree with the other posters - what exactly is so special about her that makes her more important than others in similar situations?

Malala this, Malala that.”

If you’re sick of Malala, wait until you hear about Anne Frank. (Spoiler alert: you’re not gonna like her!)

But does anyone know how to stop the Taliban from striking again? National Post commenter clued_in_to_thinking does, writing:

“How to stop terrorism: They give us Malala and we give them Cyrus and the Kardashians. That way the Taliban will realize there is no hope in the world and kill themselves.”

Grim, but effective. I’m lovin’ it!

Activists Return Home
After getting arrested after a protest in Cairo and spending seven weeks in jail, Canadian filmmaker John Greyson and doctor Tarek Loubani have finally returned home. Are they heroes? Villains? Or a pair of funky idealists? CBC commenter newsgazer writes:

“Haven’t been cheering for these guys. Stupid move for two gay dudes to go to Egypt.”

Yeah, I mean, haven’t these two gay dudes ever hear of Ibiza lol? Also weighing in on the pair’s sexual orientation was Toronto Star reader builder_m, who declared that:

“They make me ashamed to be gay.”

You know, I feel the same way when a straight guy is arrested for something that has nothing to do with how he uses his penis at sex. For a different take on the situation, let’s turn to National Post commenter xqrflp, who posted:

Sorry to be the bearer of bad news, but, yeah, your tax money paid for their flight. And to make matters worse? They flew home on a gay airplane that was fueled by glitter and sass.

“Very congratulations for this.”

“With due respect,are there many Canadians under 60 who have ever heard of her?”

Exactly. Why is the Nobel jury doling out awards to old ladies when there are so many cool, young authors out there? Exactly. Alice Munro isn’t a household name. The Nobel jury should have given the prize for literature to someone who knows how to make headlines. Someone like, I don’t know, Drake. Did Drake write a book? Give Drake an award! But it was CNN commenter cybervigilante who summed up Munro’s win best, writing:

“I’m glad she won it instead of Phil Roth. We were forced to read his novel “Call it Sleep” in college - a smothering and turgid novel. I hated it so much, that when the course was done I took it out and shot it. Two full clips from a .32 Martian automatic. Nothing left but confetti blowing in the wind. It was most satisfying.”

Phew! Looks like we averted a major disaster here! Down with Phil.

Artist Banksy Pulls A Pranksy
Elusive British street artist Banksy did some mischief-making over the weekend when he set up a stall in Central Park, hired an old man to run it, and sold original copies of his work for only $60 apiece. Predictably, opinion was divided. Telegraph commenter geniusloci was positively orgasmic, writing.

“Banksy is a genius. Like most artists, his importance will not be recognized until long after he is dead.”

Hear that, Banksy? You’re condemned to live in obscurity.

“I just don’t like him. Yeah, he has a nice body but he’s VERY SHORT and has no actual talent than taking off his clothes.”

I guess some people just don’t like the idea of short naked men having birthdays. The low blows continued, with commenter rachel asking:

“Does mario even have papers to be here”

Well, does he? Because I hate the idea of an illegal alien turning 40. Thankfully Knuckledragger, writing in Britain’s Daily Mail, chimed in with:

You know what? You’re right. Even if he is a naked man living in America illegally all these years, at least he does it with a winning smile.

Film
Claire Denis: Studies in Desire, Heartbreak, and Bodies in Motion
This month TIFF celebrates the work of the ever rigorous and challenging French director, whose Beau Travail was a… 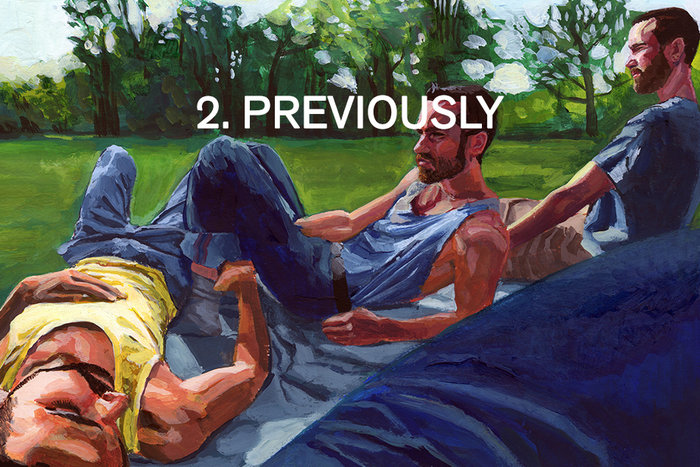 Comics
A Berlin Diary: Previously
In a special oversized installment of A Berlin Diary, we catch glimpses of the artist settling into his new life.