Claire Denis: Studies in Desire, Heartbreak, and Bodies in Motion

This month TIFF celebrates the work of the ever rigorous and challenging French director, whose Beau Travail was a fixture on just about every “Best of” list of the 2000s. Here follows a cheat sheet to the one director everybody ought to know.

This month’s Claire Denis retrospective at TIFF Bell Lightbox probably couldn’t come with a more appropriate title to sum up the great French director’s more than 25-year career. Objects of Desire suggests a need that isn’t necessarily sated, a longing that needn’t be mutual, a fixation that may threaten sex as much as violence. Rarely in the films of Denis is desire a matter of nothing more than affection—the relationships she draws between one body and another are too complex for that. More often it seems desire is merely the impulse, something deep and fundamental, ready to be dealt with in any number of ways: repression, ravagement, an explosion of rage. Denis’s films are not so much interested in desire itself than in how that desire manifests itself physically, in how it is articulated by those who need to get it out. An exchange of loaded glances, a dealing of sublimated blows, a hotel rendezvous in the night—these and more are the currency of want and need, of trying to make your feelings known.

Denis ranks among the most important filmmakers working today, and her body of work represents a vital contribution to the art of cinema. To the uninitiated, however, her work can seem intimidating and inaccessible by reputation. With that in mind we present this brief foray through the films of Claire Denis, a sampling of some of her most important films and a look what makes them great. We hope this serves as a suitable introduction to a filmmaker everybody ought to know well. 11Note that most, if not all, of these should be fairly easy to find DVD; especially notable is the Criterion Collection edition of White Material (2009), not reviewed below. 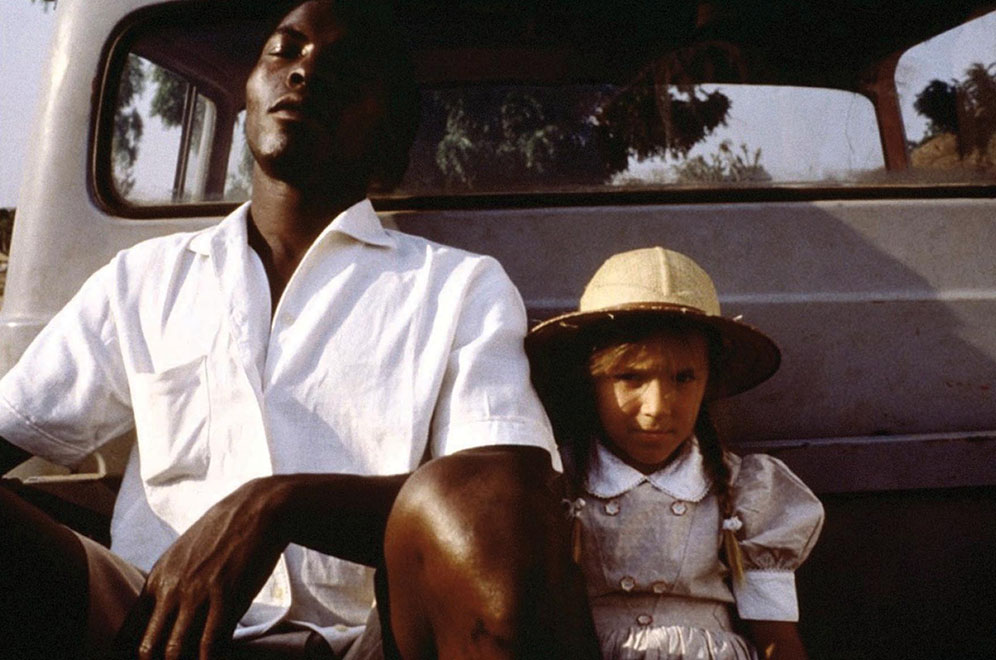 Chocolat (1988)
Chocolat tells the story of Protee (Isaach De Bankole), the ‘houseboy’ of a white colonial administrator in French Cameroon in the 1950s, who longs silently for the administrator’s wife, Aimee (Giulia Boschi). Told in flashback from the perspective of Aimee’s young daughter, France (Cecile Ducasse), Chocolat is somewhat autobiographical, loosely based on Denis’s own experience growing up in French Africa. And yet this is not a film of reminiscence. It is insight which governs this story, not nostalgia, and to that end Denis proves a mature and perceptive chronicler of the history to which she long ago played passive observer.

Colonialism is both an intimidatingly fraught subject for a film and one to which Denis seems uniquely equipped to confront and work through. The first thing you notice about Chocolat is that it doesn’t remotely feel like a first feature: from the moment it opens it feels almost too accomplished, too sophisticated to be the work of an amateur. Seen in retrospect, debut films are often valued largely for their formative qualities—for those elements most perceptible in the body of work left in its wake. But Denis never made an effort to harness and expand upon this film’s foundational virtues. Rather, she has honed in on their essence: following Chocolat her films would become more oblique, less linear. Her evolution as an artist has been a process of continued refinement, gradually paring away the extraneous, and working toward something increasingly elegant and pure.

S’en fout la mort (No Fear, No Die, 1990)
Claire Denis’s second fiction feature—preceded by Man No Run, a documentary—seems, from the outset, like a pointed inversion of Chocolat. The story is contemporary, set in the southern suburbs of Paris, and presents as both its subject and narrator a black man from Benin named Dah (Isaach De Bankole again); Dah is new in town and soon pinned beneath the thumb of the sleazy white restaurateur with whom he has entered the underground cockfighting business.

Despite the transposed milieu, it becomes clear quickly enough that No Fear, No Die and Chocolat are about much the same thing. The latter’s core dynamic inevitably repeats itself: Dah has a colleague and his boss has a wife, and the two find themselves gravitating toward one another in thrall to the quiet reverence of transgression. No Fear, No Die is a post-colonial narrative at heart, less about repression and desire than about a system of racial subordination that managed to sustain itself well outside the borders of an occupied land. Jocelyn and Dah are relegated to the margins of France from the moment they step inside it, summarily ushered into the underclass and into helpless domination. Denis negotiates the politics of representation and oppression with enough subtlety that it doesn’t seem quite right to characterize this as simply a film about race—the social fabric she weaves is too dense to be read as a parable or a thinly veiled treatise.

J’ai pas sommeil (I Can’t Sleep, 1994)
When Claire Denis’s latest film, Bastards, premiered at the Cannes film festival this past May, many critics seemed surprised that she proved so adept at making a (relatively) conventional thriller. But it was hardly her first attempt at the genre: that would be I Can’t Sleep, one of Denis’s least-seen and least-discussed early films and a murder mystery constructed from the inside out. The film takes as its subject the true story of France’s ‘Granny Killer’ in the late 1980s, a criminal who broke into the homes of the elderly to rob and murder them. Denis conceives of this real-life murderer as two men—Camille (Richard Courcet) and his boyfriend, Raphael (Vincent Dupont), who keeps the former on a tight leash. Denis throws two others into the mix: Camille’s brother, Theo (Alex Descas), struggles fruitlessly to steer him away from a life of crime and self-destruction, while Daiga (Yekaterina Golubeva), a Lithuanian immigrant just moved to France, stays with a Great Aunt who seems destined to be a forthcoming victim. 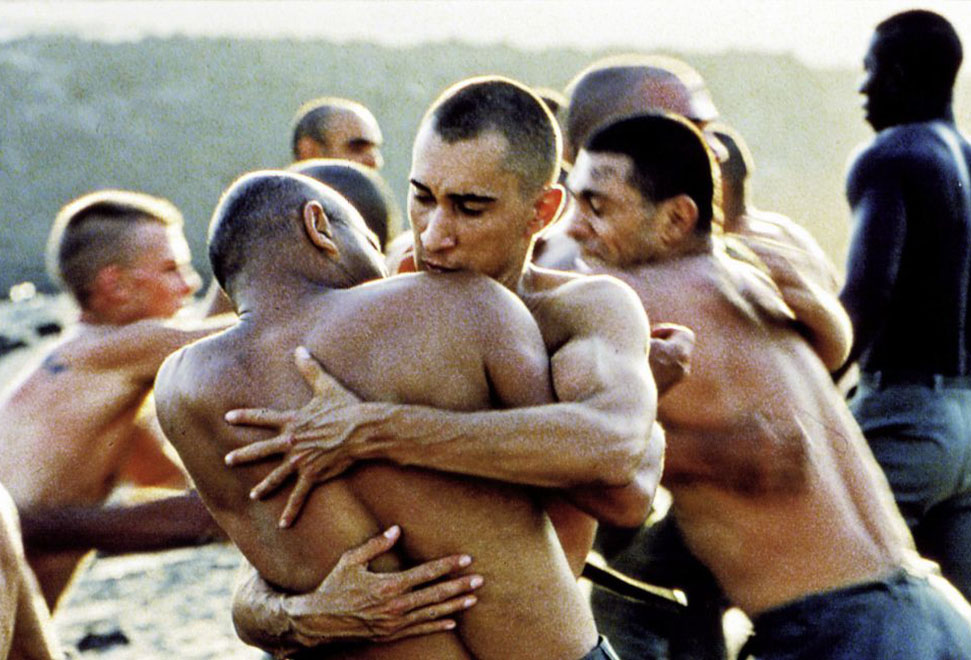 Beau Travail (Good Work, 1999)
We tend to think of sensual filmmaking as being fundamentally intuitive, a product of an emotional artistry. It seems especially difficult to reconcile sensuality with intellectual rigor. But that, I think, is the central contradiction of the cinema of Claire Denis: her films seem equally fixated on the mental and the physical, at once deeply theoretical and intensely aesthetic. If Beau Travail is Denis’s masterpiece—and I strongly believe that it is—it is because it represents the precise intersection of these apparently contradictory impulses, the place where thought and feeling are most seamlessly aligned.

The conceptual scope of Beau Travail is broad: ostensibly an adaptation of Melville’s Billy Budd, the film shifts the action from the Mediterranean sea to the calcium-lined beaches of Djibouti, where a French Foreign Legion platoon spends its days ceaselessly training for battles it will never have. We’re back in traditional Denis territory here: an Africa dominated by intruders, these ones uniformed and armed. But the focus has narrowed: the real subject of Beau Travail is the body, in stillness and emotion, framed against the harshness of the land and considered in relation to others. As in the novella, there is a queer dimension to the power dynamic—the young Adonis hated inexplicably by his superior officer, the latter embodied here by Denis Lavant—and Denis emphasizes it in her constant arrangements of gleaming male figures, crashing into one another during maneuvers, wrestling into embraces. And then, of course, there’s the ending: one of the most striking ever put to film, an eruption of movement, a moment of exhilaration and heartbreak.

Vendredi Soir (Friday Night, 2002)
Given the scale and ambition of Beau Travail, the most striking thing about Vendredi Soir may be how little happens in it. Laure (Valerie Lemercier) is moving the last of her things from her flat in Paris to her boyfriend’s new apartment across town when she finds herself stuck in seemingly endless traffic, the result of a public transportation strike that has left the city in perpetual gridlock. Encouraged by the radio to share her ride when possible with needy passersby, she invites the handsome Jean (Vincent Lindon) to get in out of the cold and keep her company through the slow crawl across downtown. Romance ensues, but this isn’t exactly Before Sunrise: the mood here is slightly dreamlike and surreal, as if Laure had nodded off in the jam and taken a night-long adventure through the nap. Little flourishes of unreality intrude from time to time into the world of the drama, but even the more natural elements seem somehow unfamiliar: the speed and intensity of Laure and Jean’s union, the utter lack of friction in their fleeting relationship, makes the movie feel like a foray into magical realism. In keeping with this spirit, Denis keeps everything hyper-lush and seductive: the shimmering score, the sumptuous high-gloss cinematography. Everything is beautiful and lingered over, from the ecstasy of intercourse to the sizzle of fresh pizza.

35 Rhums (35 Shots of Rum, 2008)
Another, less commented upon contradiction in the films of Claire Denis: the confluence of joy and despair. It’s fitting that Denis served as assistant director on Jim Jarmusch’s great film Down by Law, because no line sums up her sensibility quite as succinctly as the one Roberto Benigni made famous there—”it’s a sad and beautiful world.” Denis has cited Ozu as an influence on 35 Shots of Rum, and it’s easy to see shades of Late Spring in this story of a father resigned to seeing his adult daughter grow out of their life together.

There are also tonal similarities to consider, as here the bittersweet grace mastered by Ozu finds its ideal heir in Denis, who manages to elicit from her actors the perfect balance of sadness and satisfaction. There is a key scene early in the film in which Rene (Julieth Mars Toussaint), a lifelong train conductor, is being thrown a retirement party by his colleagues. On the one hand it’s a fondly celebratory scene, the gestures and rituals of their time together depicted so naturalistically that the world feels lived-in and totally real. And yet in Rene’s face all we can see is sorrow: the end of his job has meant an end to his sense of purpose, and he is left disconsolate and alone. The discrepancy is part of the emotional texture of the film: we feel their interplay, the conflict of feeling, as we do in real life. It isn’t incompatible, it’s the only way things can really be.

Hear The People Sing
Why Doesn’t Drake Have A Nobel Prize Yet?