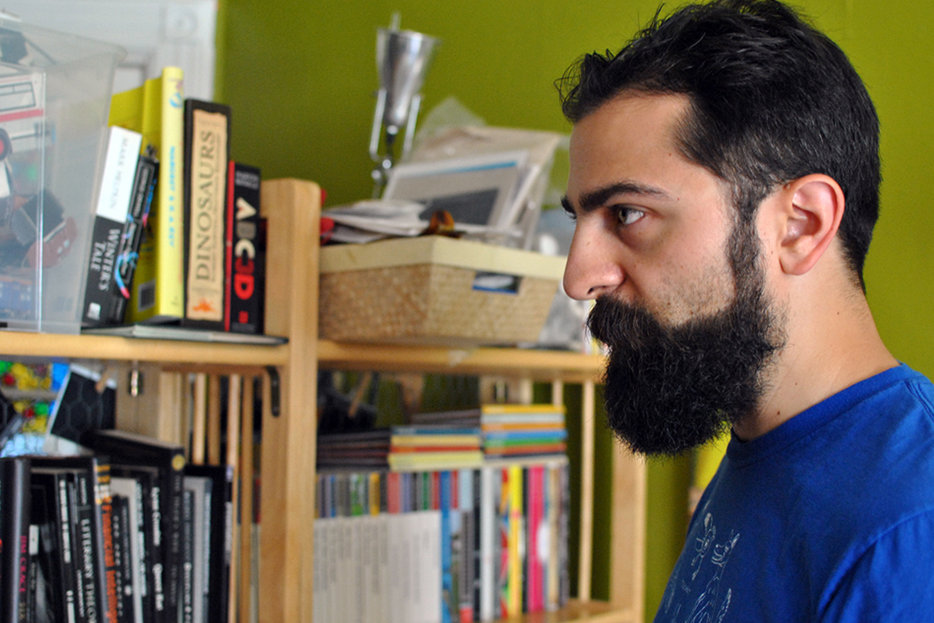 Shelf Esteem is a weekly measure of the books on the shelves of writers, editors, and other word lovers, as told to Emily M. Keeler. This week’s shelves belong to Nathan Maharaj, who is the director of merchandising at Kobo, but could just as easily be called the company’s chief bookseller. Maharaj lives with his partner Allie, their two small children, and a dog in Toronto’s East End. The books are spread all over the house, with shelves in every room.

When we moved in I didn’t take much time off work, so we were living in boxes for a bit and Allie wanted to get the books unpacked. She hates arranging them the way we had them in our last place, which was more library style—here’s post-colonial literature, here’s Canadian, here’s the business section. She didn’t want anything to do with that, but she wanted to unpack the books, so she asked if she could do it by colour and I said yes, because I knew I could find everything by colour still, having been a bookseller for however many years.

So you have a combination of the purples and browns and greens and then the kids stuff that’s totally overflowing, and that’s only half of it—the other half is downstairs getting read in some kind of rotation. We have no system for that, it’s whatever gets dragged out. We just lost a block from yellow because the kids just discovered the Curious George treasury. So now there’s a gap in the yellow section, which is deservedly so, because they should be reading them. 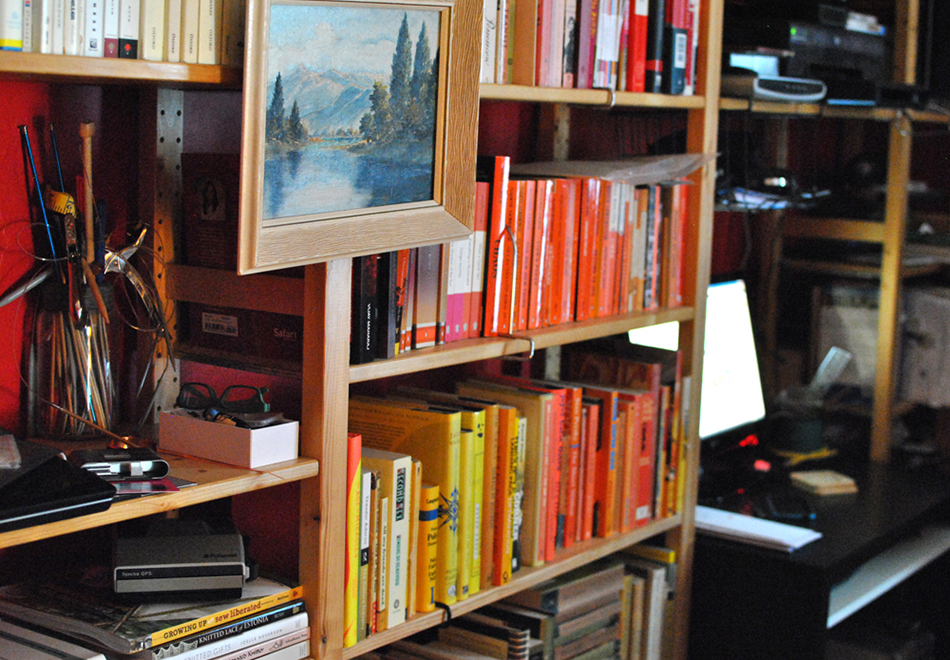 All the Penguin green-spines—a long way from their brothers the Penguin silver-spines, as well as the Penguin orange-spines. And then I’ve got 10 years of Granta, and then The Believer since I don’t know when. Every time I renew I go for two years, and in these times of financial dire straits for the magazine I feel good about that. And then scatterings of McSweeney’s. 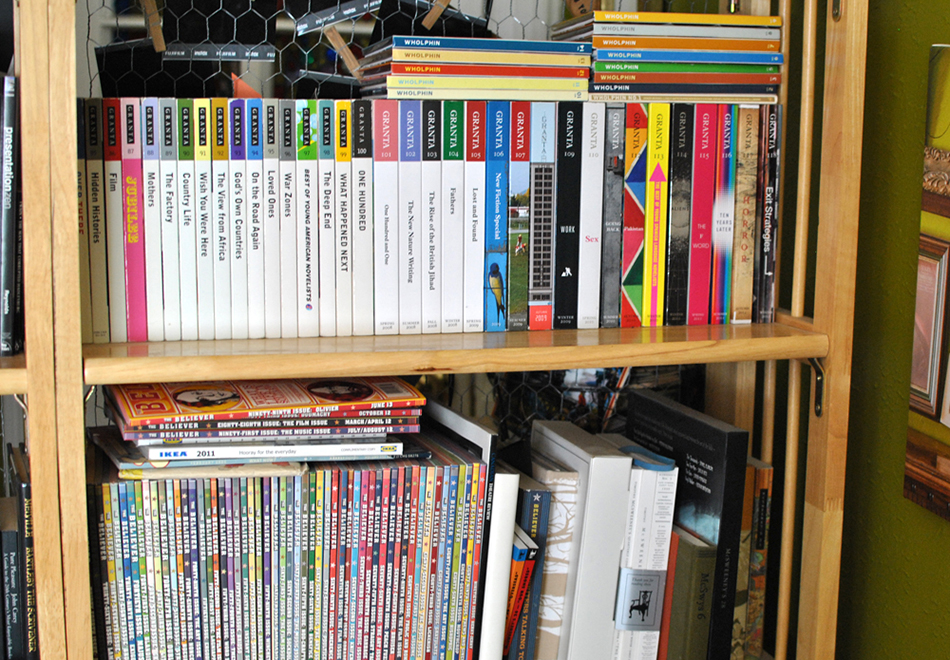 Almost all of the hardcovers that date from like 10 years ago came from the remainder bin when I was working at Chapters. So I’ve got a lot of hardcover copies of second-rate books by well-known authors. I don’t have Blindness, but I have Jose Saramago’s The Cave because it was a remainder. I don’t have Midnight’s Children, I have The Moor’s Last Sigh and The Ground Beneath Her Feet in hardcover. But I got all of these at $8.99—sitting in the remainder bin, 30% employee discount—and so I stocked up on that. And then it shifts to this later hardcover stuff that I got while I was a buyer at Indigo. 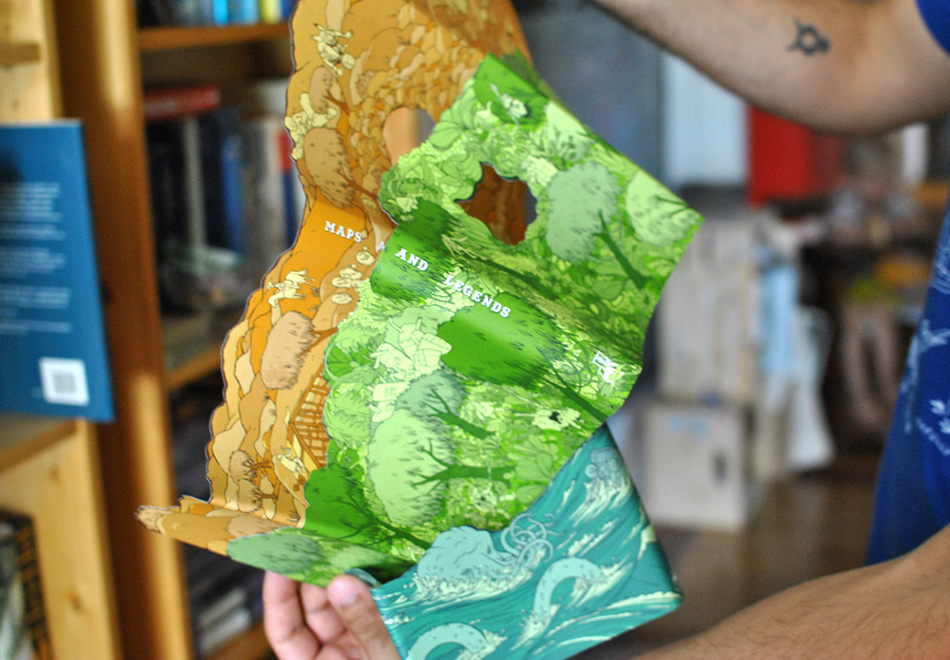 There’s a lot of non-fiction that shows up that way. I mean, we could hang out in this section forever, but, like, The Angler: The Cheney Vice Presidency or Margaret MacMillan’s Nixon in China showed up because I was a buyer and you just can’t stop the books from coming to you if you’re a buyer, especially for a national book chain. There are other great examples of stuff that just landed on me, hardcover… Oh yeah, Maps and Legends by Michael Chabon with its fold-out, crazy cover. I had the unenviable task of being the buyer for the Essays and Criticism section, so there was nobody in the office more deserving of the hardcover edition than I and here it is. That’s how things have fallen on me.

Then of course there’s the sudden drop-off of books from four years ago when I started working at Kobo and stopped accumulating books physically. It’s a Pompeii kind of thing: The layer of ash landed and the book collection’s kind of frozen. Kids’ stuff keeps going, a couple of things sneak in. Every time you visit the Anansi office, if you’re lucky someone will give you something to take home, and they gave me this Ken Babstock. This isn’t just any one: This is the one that Coach House printed, so there’s this gorgeous, amazing, super-heavy paper. But it’s a real thin, thin trickle of new books coming, outside of kids’ books. 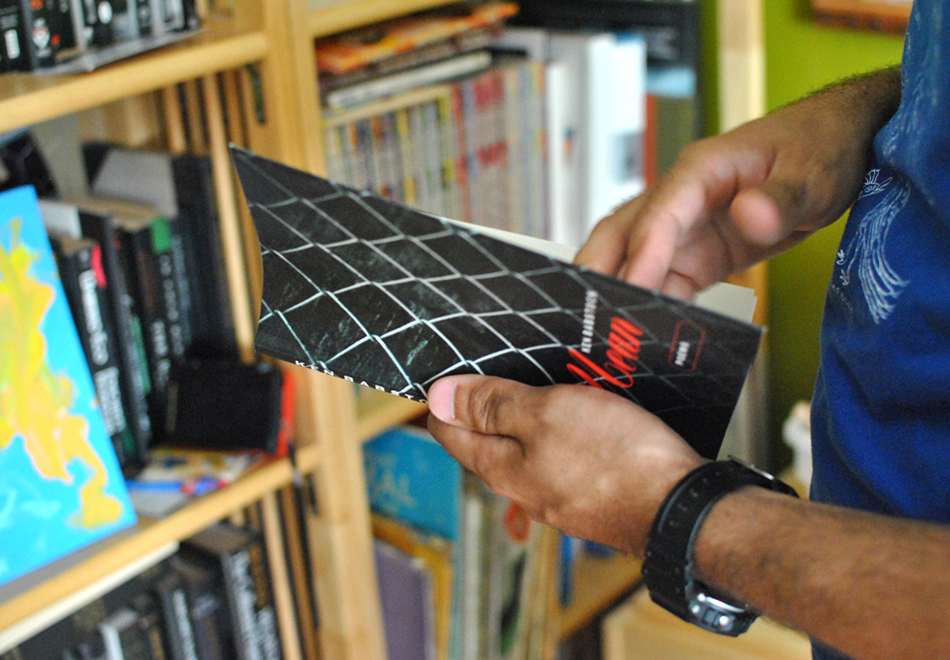 Now I’m consuming everything digitally, which has its ups and downs, I guess. It’s way easier to broadcast what I’m reading digitally in the middle of doing it, to have those conversations at that time. But it’s harder to turn someone loose on the library at home and start conversations.

It’s funny—I used to read, up until the last issue of Granta, the paper edition. But then I realized we have it in the catalogue at Kobo and I could just put it in my device. They were stacking up, unread, and I just couldn’t find time to put them into my routine. But I knew every morning on the streetcar, I’ve got 30-40 minutes with my e-reader and I just need Granta to be there. So I’ve been doing that now, more and more. Now I’m falling behind in The Believer because it’s coming to me in print and I’m not finding time in the day to remember to bring the magazine with me to actually read it. I’ve become really irresponsible about physical media at this point. I commissioned the murder of these trees and now what am I doing with it?

When we moved, it was more than a full bookstore skid, 35 boxes. It was crazy. I feel like we can’t move again without having a major purge. It’s just getting unreasonable. There’s a lot of stuff that’s not getting re-read or read in the first place. There are a lot of unread books that have been moved a couple of times. 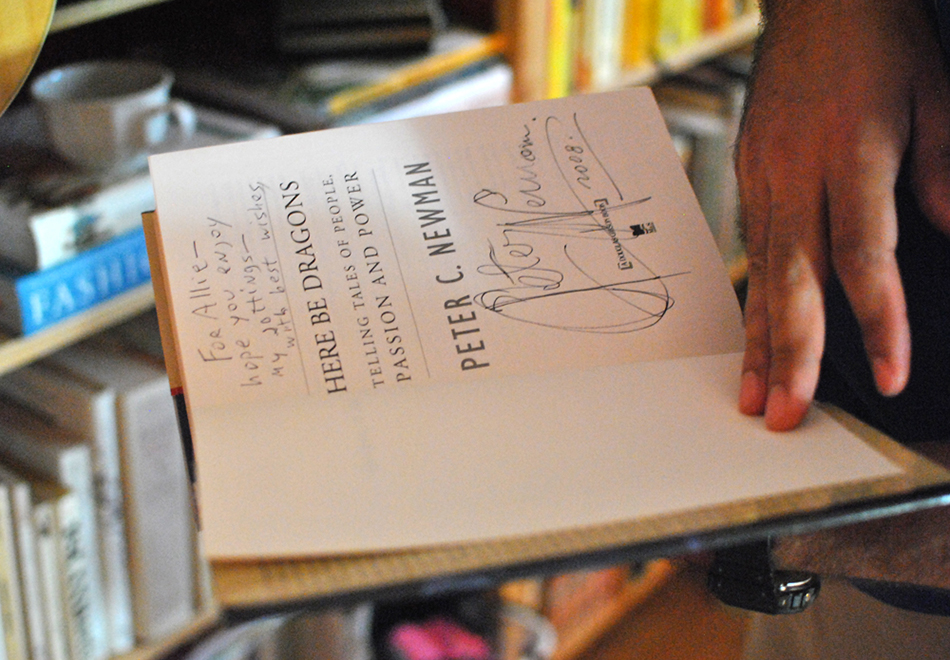 I’m almost definitely not going to read Peter Newman’s Here Be Dragons, but I had lunch with the guy and he signed it and dedicated it to my wife. So I’m not casting it off. But that’s a big chunk of the box when moving.They’re all totems of their digital ghost selves. I can’t forget them, I can’t forget that they exist. They have to haunt me a little bit. At the same time, if anyone visits and they show any interest in any book, I usually let it slip out the door. Someone will touch it and I’ll just be like “take it!” Too many of these books came into my possession too easily for me to be at all greedy about it.

The Harvard Business Review Essays. I’ve lost track of that series now, they’ve published dozens and dozens more. They know how to package things: It’s a very attractive, sellable thing. They’re great and they’re so clever, the cover illustrations, these cute visual metaphors. Great series, but tough for me to re-connect with. 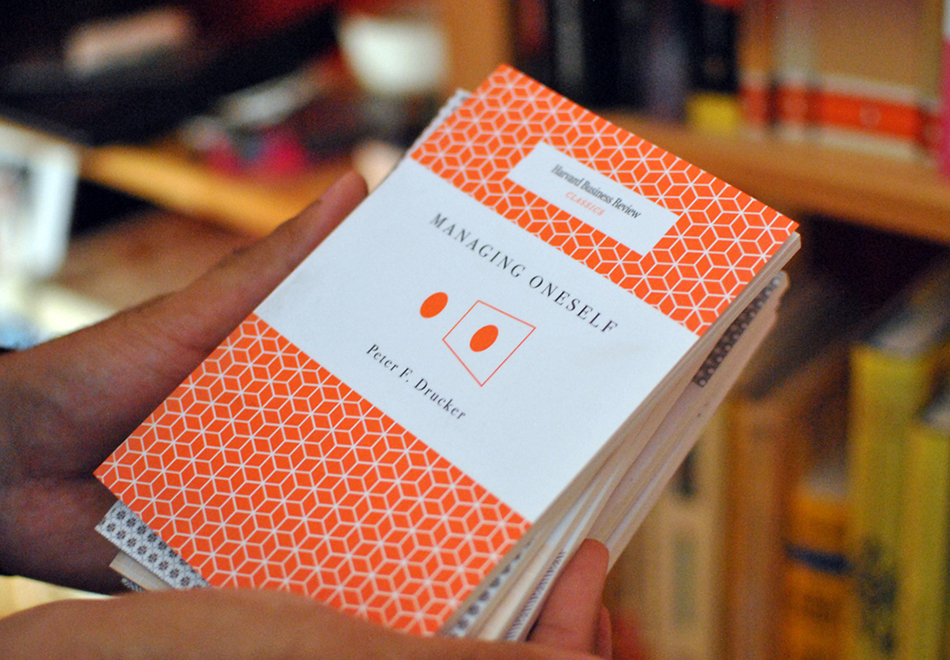 The Collected Stories of Peter Carey. I can’t even remember how I got this one. It doesn’t have the wear of a Chapters remainder book. I’ve read this whole collection two or three times, and I’m not a re-reader, but I met him [a few years ago] and got it signed, and I got to ask him a question: I asked him where the author of this book has gone, now that he’s Peter Carey, the Booker Prize-winning novelist. Where’s the nerdy science fiction guy who wrote these stories? 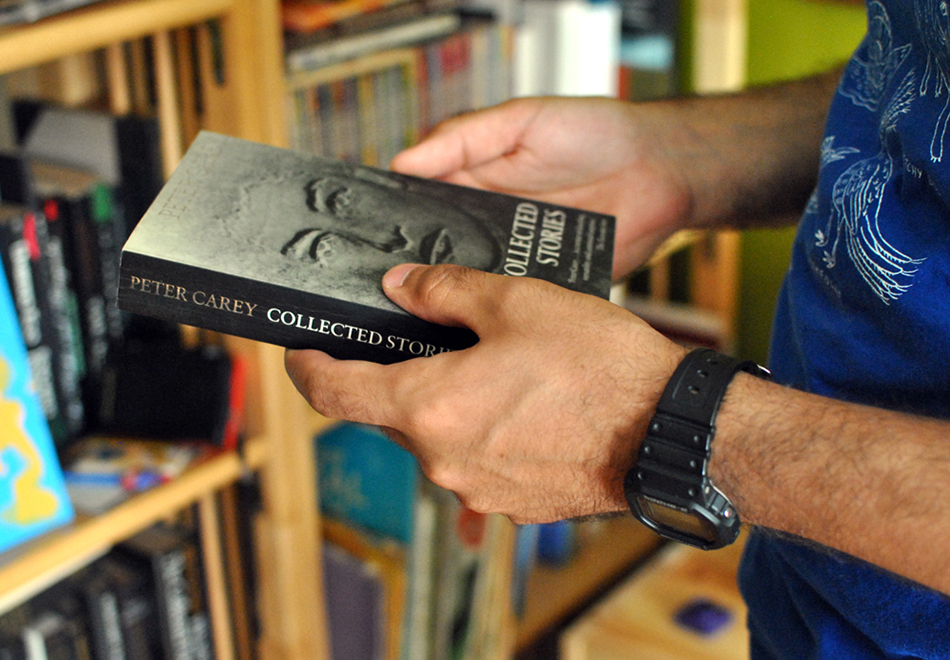 I feel like he was a little dismissive, like, That was kid stuff that I did then and that was the right thing for me to do then, but I don’t need to keep doing that. But me and this book, this actual physical book… It might have been 10 years ago. I had this in grad school. It was part of a half-assed plan I had. I wanted to do something with Australian post-colonial literature for my PhD, but I was just thinly veiling that I wanted to read Peter Carey for the next four years. And that’s why I didn’t get into the programs I wanted, because it was a really half-baked idea. 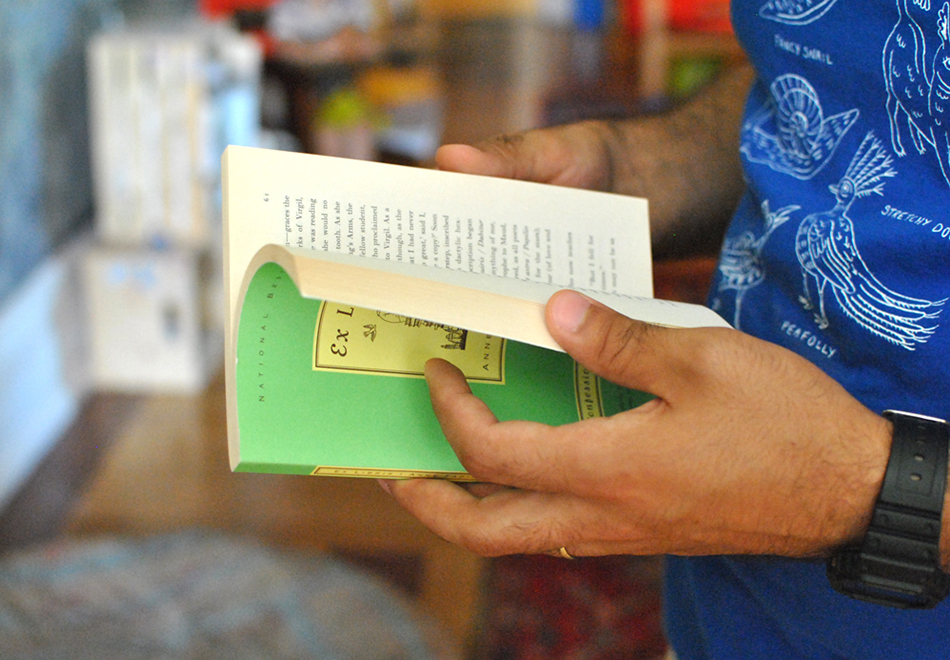 I had a couple copies of Ex Libris here and now I’m down to my last one. Great book about books, about life with books. You don’t start with this one, but when you get up to a few hundred volumes, this one has to show up. It kind of explains it all. There’s a chapter about people who leave books face down as bookmarks and how awful that is. It’s an essential part of the library. 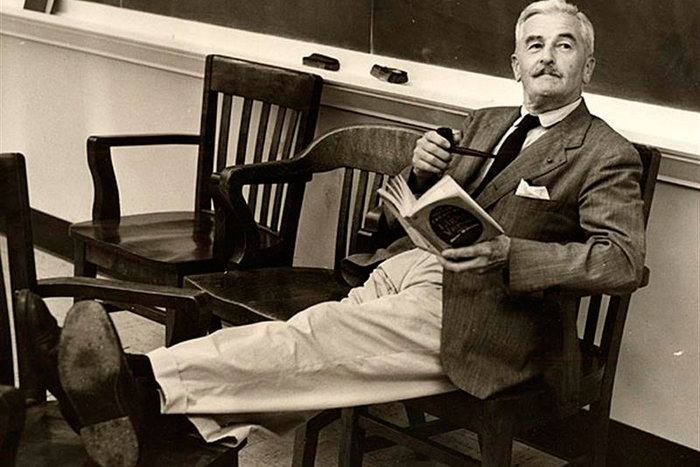 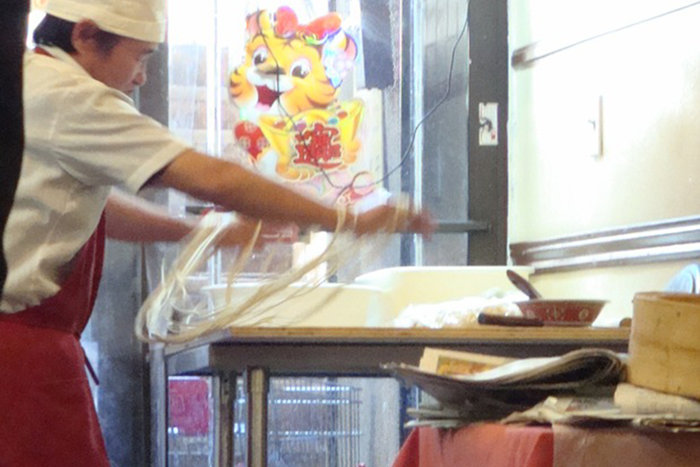 Food
Murder and Noodles
It takes time to find your favourite Chinese food place, and the friends to attend it with. But once you’ve found…