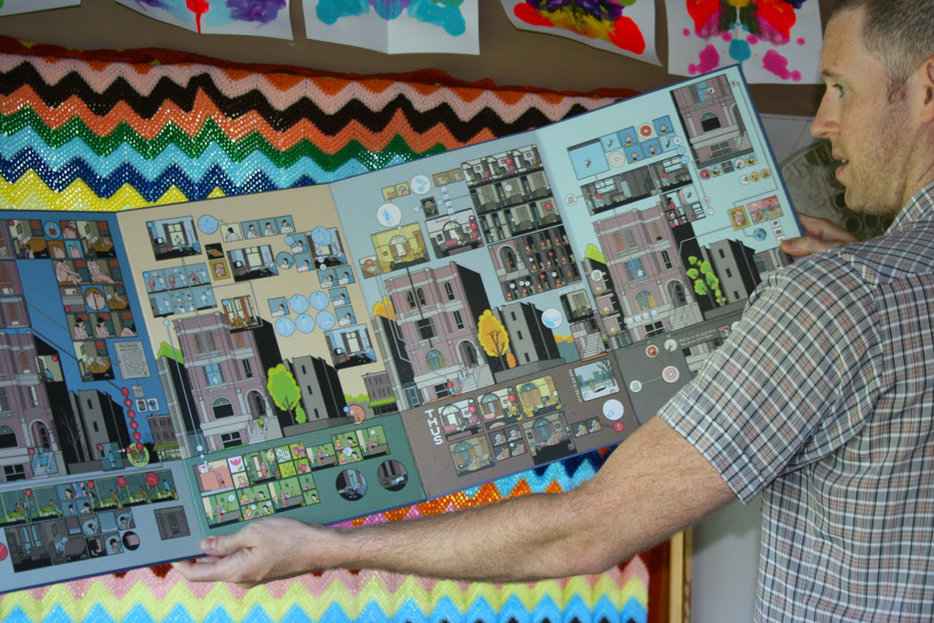 Shelf Esteem is an as-told-to measure of the books on the shelves of writers, editors, and other word lovers, founded by Emily M. Keeler. This week’s shelves belong to Chad VanGaalen, a Calgary musician and visual artist. His studio is in a converted garage behind his family’s home, on a hill overlooking the now-swollen Bow River. He and his daughter spent a month dumpster diving the material they used to build his studio’s adjacent room where he houses his collection of graphic novels.

So this is sort of my main bookshelf. I’m really into reading novels but I’m a dad now, so I don’t really have time to delve into novels properly. But I do a lot of illustration stuff so I love graphic novels. I have since I was a kid. What I just finished reading recently was this book called Before the Incal. This is my favorite graphic novel of all time, The Incal. He’s my favourite illustrator, Moebius—Jean Giraud, that’s his real name. He’s a French illustrator; he used to do a lot of work for Heavy Metal magazine. Mostly I’m interested in his cityscapes and how much work he puts into them. 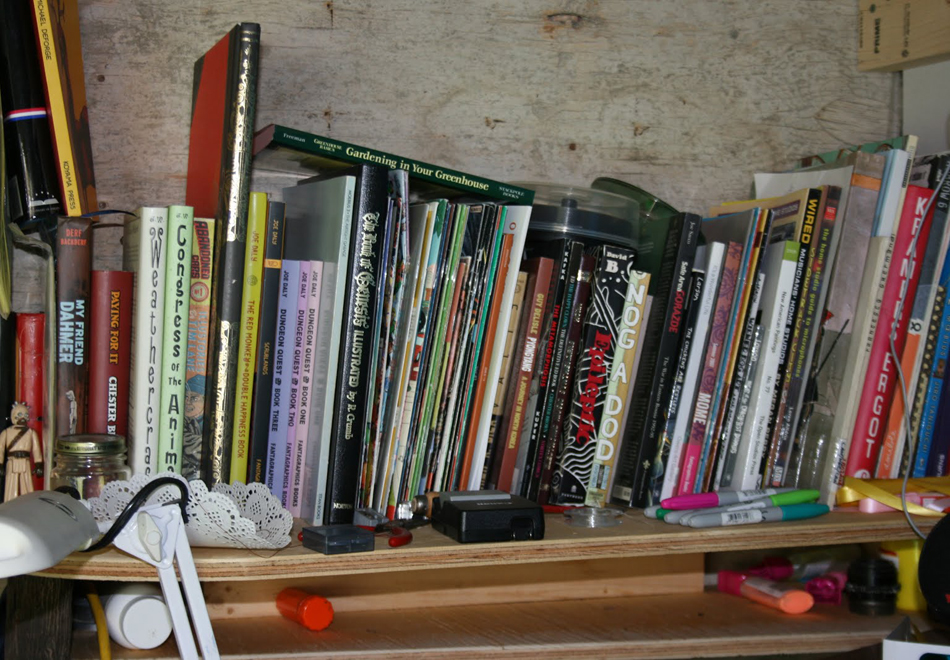 I’ve been listening to a lot of Joseph Campbell and right now I’m working on an animated movie, so I’m trying to figure out proper character arcs and mythology, and common hero mythology. [Chilean-French filmmaker Alejandro] Jodorowsky did a lot of psychedelic movies back in the ’60s too, and he’s really obsessed with tarot, collective consciousness and those sort of myths and religion and putting it all into one sort of common theme. [The Incal] does a really good job of it. And [Before the Incal] is written by the same guy but illustrated by a different guy and I feel like it falls apart in the middle. This one was written after but it’s actually supposed to be the story before The Incal. Jodorowsky has worked with Janjetov, and he’s a really good illustrator too, he’s even more teched out. But yeah, it’s totally sci-fi fucking stupidity. 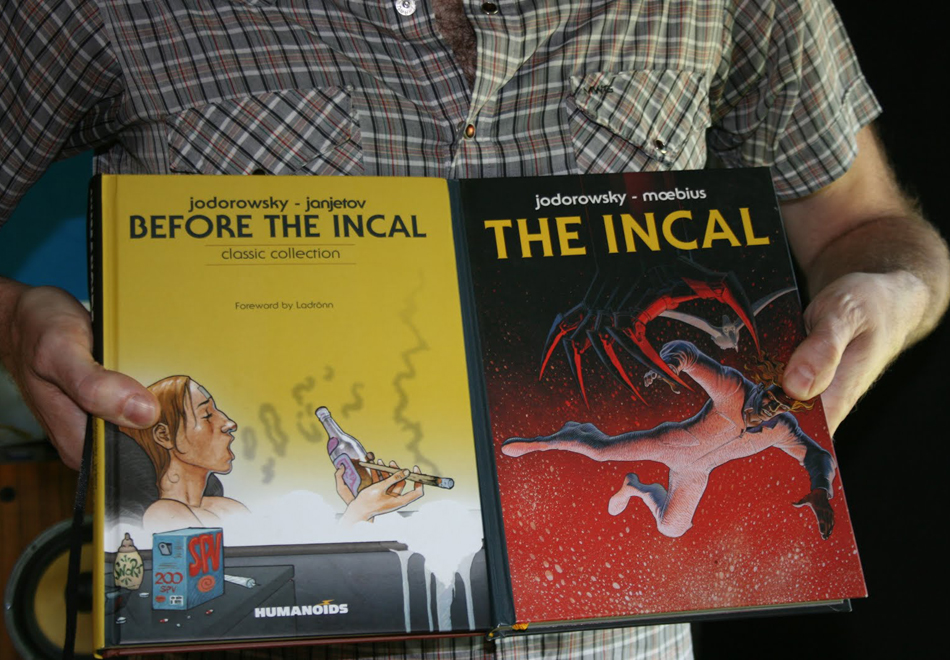 Dash Shaw is blowing my mind right now, too. The first book that I bought of his was called Bottomless Belly Button and it was more an American Beauty thing, like this family gets together in this beach house and break apart and get divorced. This one’s like sci-fi mixed with high school trauma. I don’t really like the form. It’s really awkward. 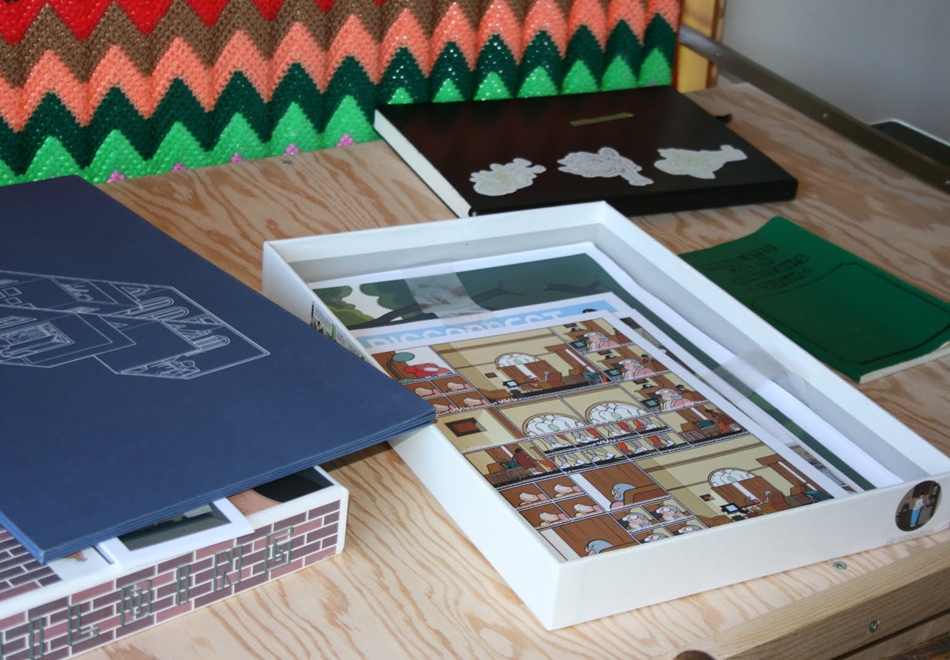 Acme Novelty Library… what’s his name… What’s your name, genius?! It’s totally fucking crazy. I’m trying to steam my way through this, but it’s kind of daunting. He’s obviously OCD. The way that it’s presented is really strange, it’s just these weird vignettes. Like this kind of shit, like what’s up with that? You’re trying to read this in bed and you’re like, “What the fuck?” It’s about this continuum of insanity in this one building that everyone lives in, from what I gather—I’m just starting. Where is your name on your work, man? [Tips over box] Chris fucking Ware, Jesus Christ. But yeah, I like it. I’ve pretty much read everything he’s done and he’s totally killing it on every level with this stuff. 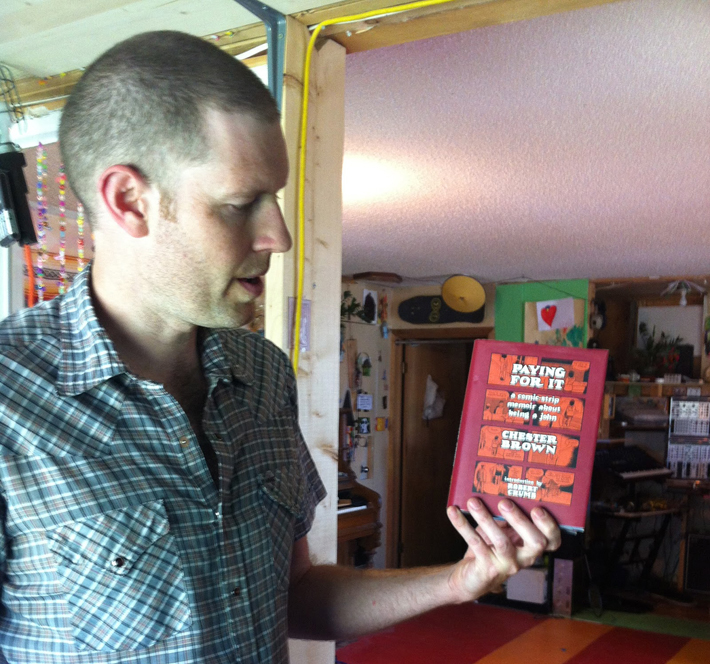 I really like Chester Brown actually, he’s a Canadian guy. This one was interesting, I don’t know if I necessarily agree with it. He got the Eisner Award for his Louis Riel book, which is awesome. Paying For It is about him being a john for like a decade and it’s fucked, man. It’s a real account of him paying for sex for 10 years. And then there’s this manifesto at the back about him defending prostitution and all about sexual objectification. I mean, I can get down with it, but on the other hand, if you’re some comic book illustrator going to pay for sex, well yeah, that’s pretty unintimidating. And he’s like, “I had a really good relationship and I was respectful,” but, whoa, that’s not always how it is though. That’s such a narrow view. 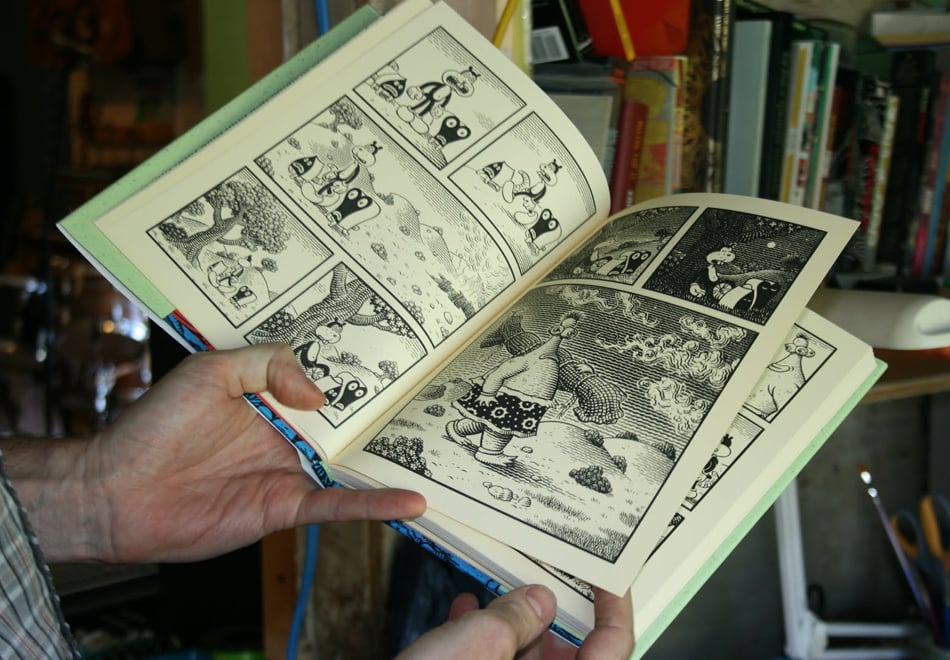 Jim Woodring is one of my favourite ever storytellers just because he doesn’t use any words. He puts out something called Jim. He’s another Fantagraphics genius along the lines of R. Crumb. I would say he’s even crazier. These are pretty dark, they get pretty perverted. I also feel like [graphic novels are] more developed than the written language. I feel like, for me at least, it’s awesome to see someone that’s doing stories without using language because then it’s open to anybody. I could be some kid in China opening that up and still have access to the story, which is kind of magical. And it is this primal thing, that’s how we started telling stories was with images and then they turned into icons and letters. 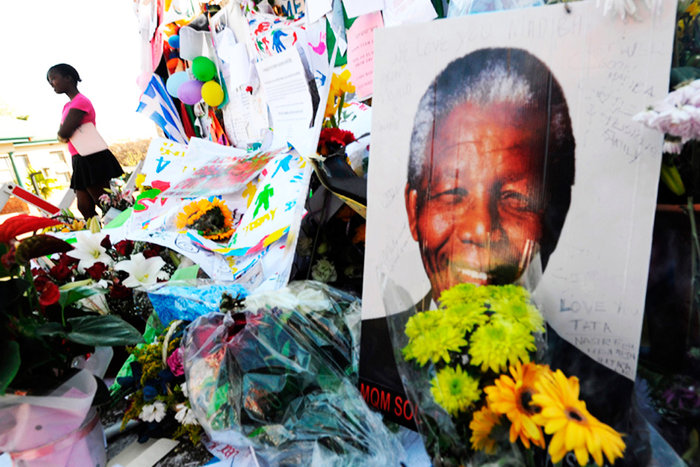 Society
What South Africa Can Learn From Post-Gandhi India
With South Africa bracing for life after Nelson Mandela, could the tumult in India that accompanied Gandhi’s death be a… 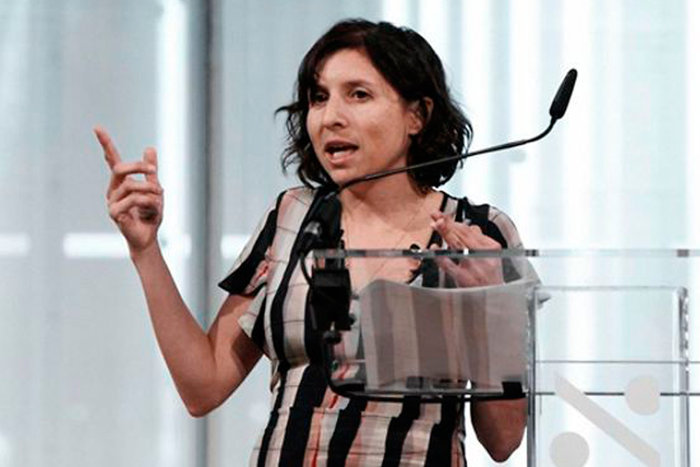 Culture
Starlee Kine on This American Life at 500