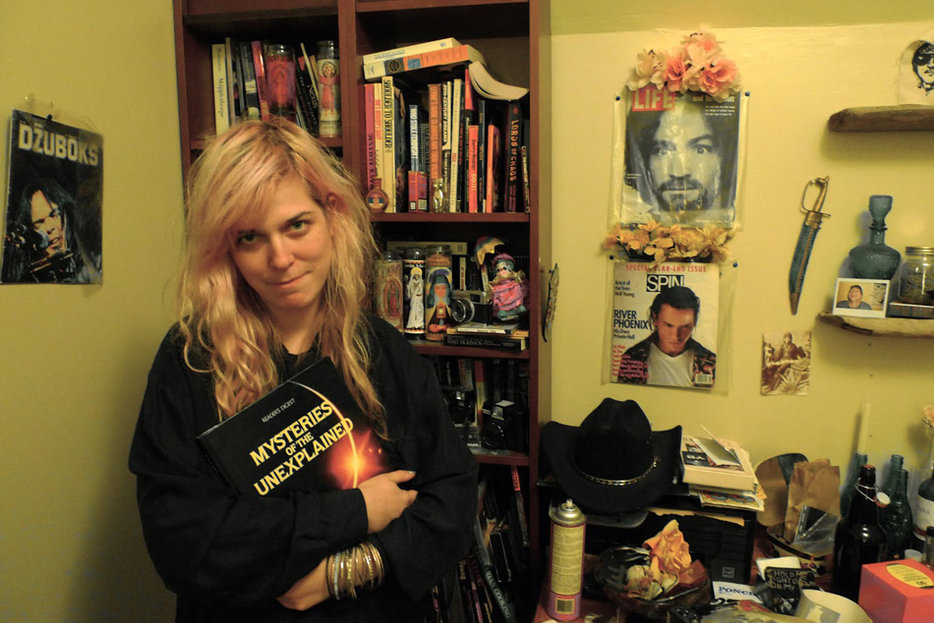 Shelf Esteem is an as-told-to measure of the books on the shelves of writers, editors, and other word lovers, founded by Emily M. Keeler. This week’s shelves belong to Andrea Lukic, the bassist-vocalist for Vancouver punk band, Nü Sensae. The band recently returned from successive US and European tours to promote their latest album, “Sundowning.” Lukic’s lofty, East Vancouver bedroom is a messy kaleidoscope of rock n’roll artifacts, strange trinkets and stacks upon stacks of books. In the late afternoon and into the evening we combed through Lukic’s eclectic collection of weird and beautiful books.

I don’t organize my books at all and I can’t find anything. Here’s the thing, I have too many books. I know I have too many books. The problem is I have a lot of books that I think are really beautiful. There’s lots of books I’ve read, like Cormac McCarthy books—that I love—that I could give away. The editions aren’t that great, they don’t look that cool. But so many of these books are so beautiful. Like, A Pictorial History of Magic and the Supernatural from the ‘70s. I can’t give that away! They’re like reference books.

I have a tendency, because I do visual arts, to judge a book by its cover. And I think that it’s a false statement anyway, because the kind of books that I collect, a lot of them you can tell a lot by their cover. Even just the choice of colours and the layout, I can tell they’re going to be good.

[My collection] is like Kenneth Anger-ish, because it’s a lot of Hollywood, a lot of pop culture, but a lot of occult, a lot of magic. What’s behind things that are really beautiful. 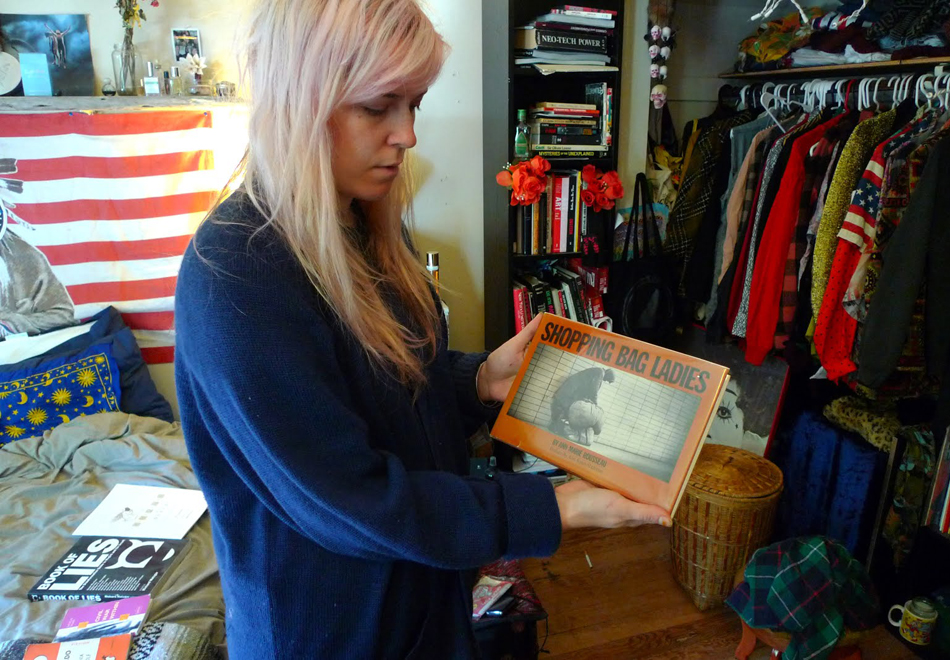 I got Shopping Bag Ladies at my favorite bookstore in Olympia, Washington. This woman, Ann Marie Rousseau, she photographed bag ladies in San Francisco, New York, and Los Angeles, and she interviewed them and got their life story. She sort of exposes the myth behind such a secretive looking character and also a woman, too, and how they all led pretty different lives. It’s quite shocking, the backgrounds of some of them, but they all become the same character in society, even though they come from different worlds. What drives women to isolate themselves and become so independent that it’s harmful to themselves, basically. Really good photos. 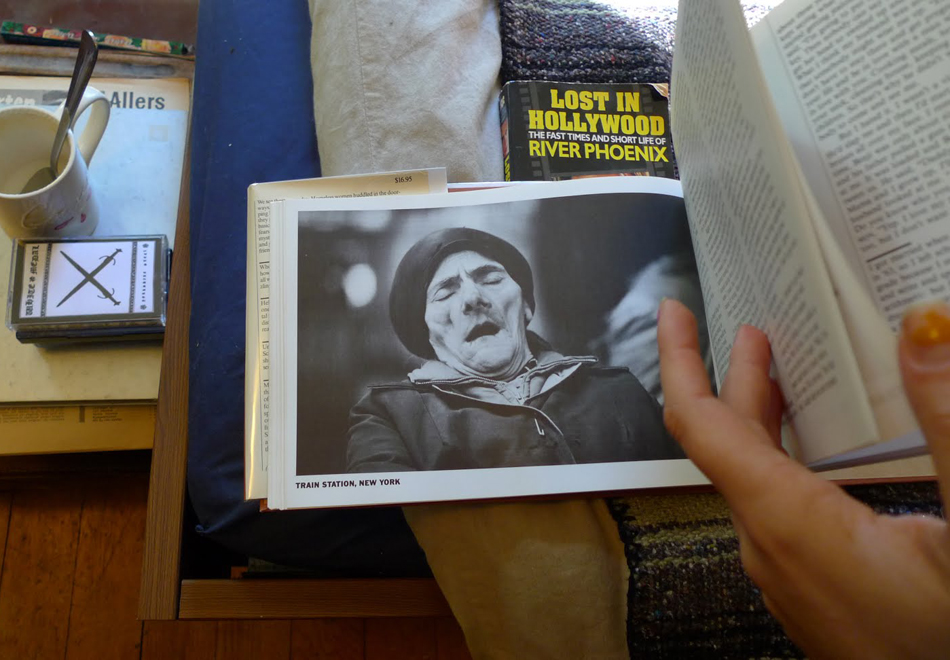 There’s one woman, she had a psychology degree and was married to a wealthy businessman. But there were all these things in her life that she had no control over that were really simple things. And she decided that the only way she was ever going to have control was if she wasn’t married, if she didn’t have a job, if she didn’t own any property, and didn’t have any capital. A lot of these women, they stay out of shelters; they just fend for themselves. The stories are mind blowing. It’s from the ‘70s and women’s roles in society then—just the lack of independence—drove them to such extremes. 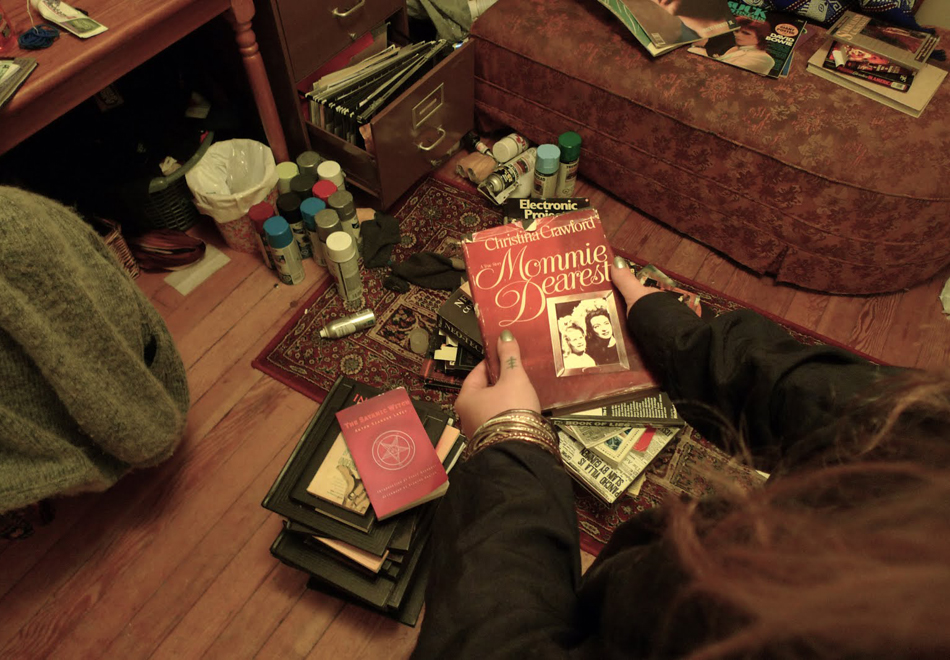 This book, Mommy Dearest, is the story of Christina Crawford, who is Joan Crawford’s adopted daughter. When I first read this book I read the introduction 10 times. It just captures Hollywood at the time. It’s really a kind of dark but magical description of Hollywood and a really good backdrop for her life, and obviously her life is really messed up. The last record we did, I took a lot from this book. Also the cover design is so amazing. It’s a bit Danielle Steel. Lots of lyrics came from this book. 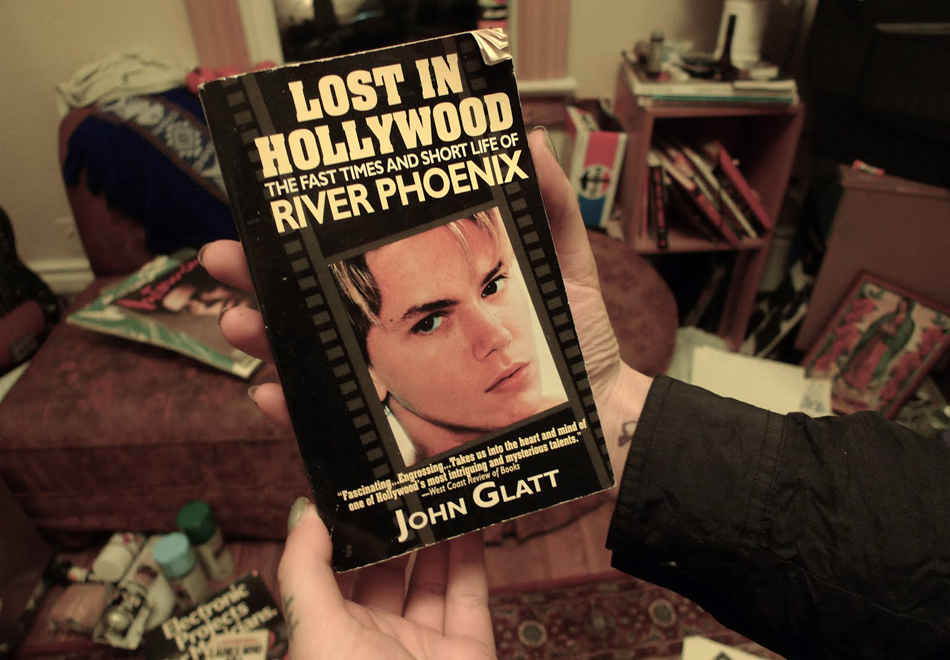 Lost in Hollywood: The Fast Times and Short Life of River Phoenix. I own about six River Phoenix books that are unauthorized. He’s my favorite actor. I think he’s really interesting and the cult surrounding him is pretty amazing. He’s like a character actor. He kind of plays himself within a different narrative. I think the reason people feel so close to him—he also always plays a troubled young man—is that they feel like they know him, because he is almost really playing himself just within all these different stories. He’s just reacting to stories the way that he would himself. He grew up really poor and lived in a van with, like, a million brothers and sisters. He was in a cult and he was their ticket out of poverty. I’ve read a lot of interviews where he’s said, “I wouldn’t have been an actor; it wasn’t my first choice. But now that I’ve done it and all these people feel they have this relationship with me and my characters, I feel like I owe it to them now to pick my stories really carefully.” It seems like more of a craft than anything, it seems like a life’s work. He’s already got his audience and now he’s just going to cater his work to fit his own philosophies. I don’t think a lot of actors do that, but he does. I can’t think of one movie where I don’t morally agree with his character. 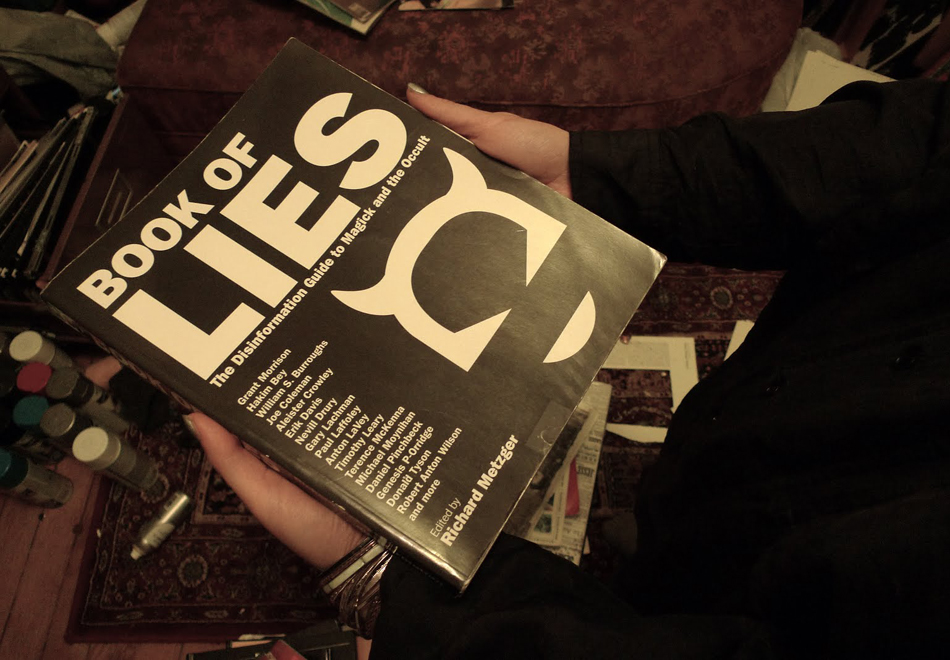 The Book of Lies, my friend Lane from Edmonton gave this to me. If you’re interested in reading about the occult and chaos magic, this is the book to start, and the book to end all books. There are so many essays, they’re so well written, they go further. It’s not like the Las Vegas Satanism stuff, it’s like really in-depth writing on the occult that I hadn’t read before. Technology, religion, art, how to use different types of magic and their origin, but with a really contemporary lens. I’m really interested in magic. 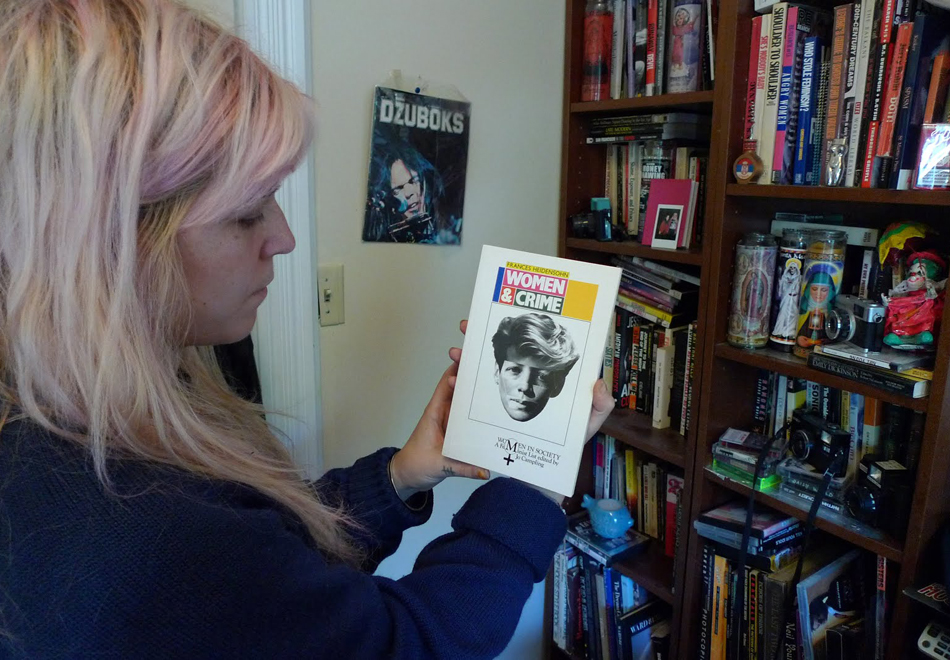 I’m interested in feminist theory and I’m constantly looking for the right book. It’s weird to read books about you, in a sense, that aren’t tailored to you and so I constantly keep finding new ones and trying to read them. I found this one though, this might be as close as it gets. Women and Crime by Frances Heidenson. This is my book. It’s interesting. It’s about the psychology of women and crime. Women on the fringes of society is what I’m interested in. 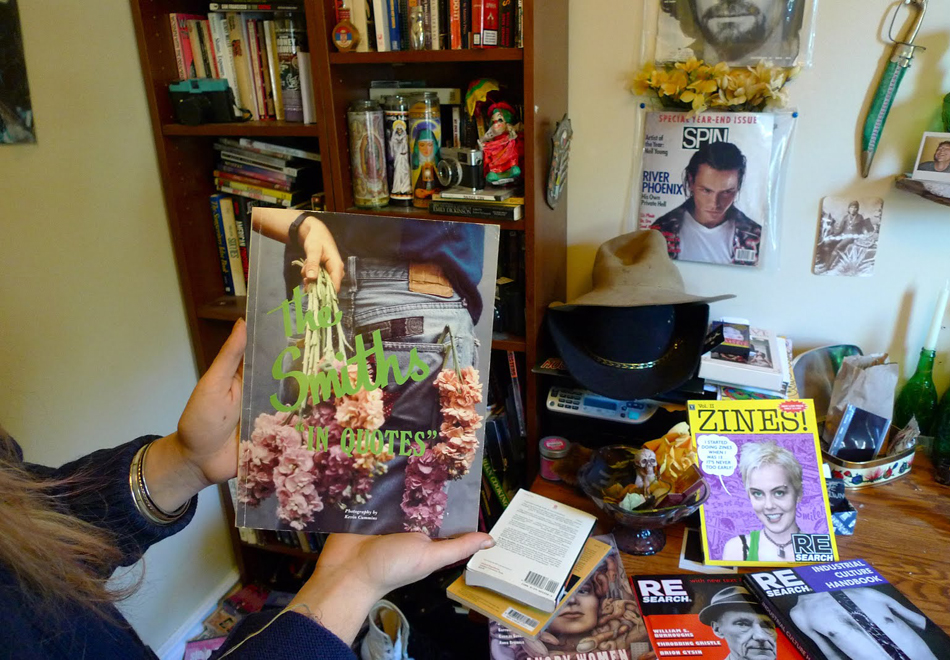 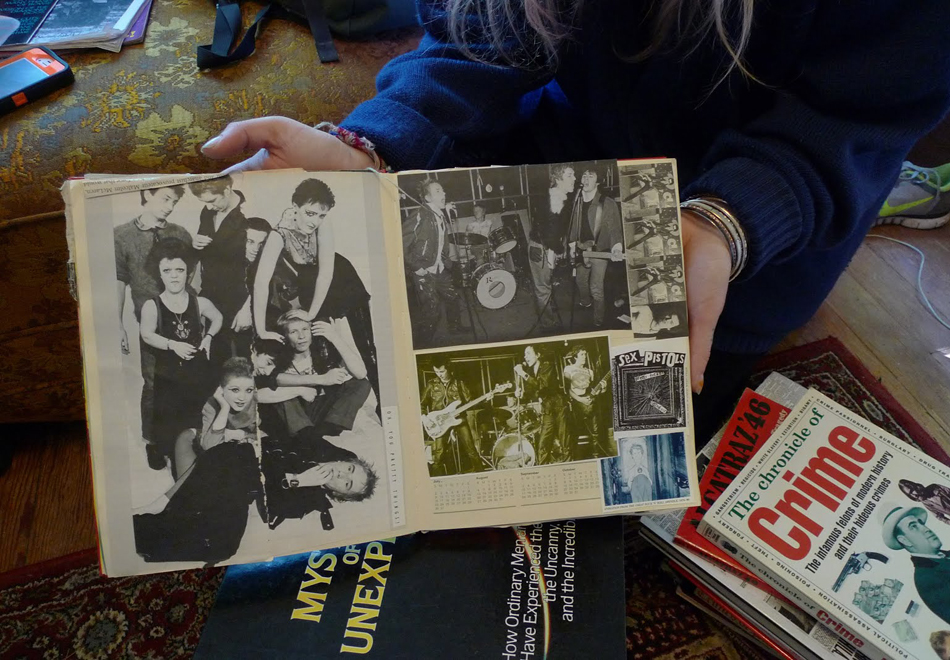 Okay, I made this when I was 13. It’s pretty intense. This is the first book I made. I’ve been making zines since I was 13. I got into the Sex Pistols in grade six and I would just photocopy photos of them at the library. I used to steal books from Chapters and I got caught stealing and my parents grounded me and the only place that I was allowed to go—they’re like Eastern European, so I had to study—was to the library. So then I would just photocopy at the library and work on this, didn’t study, there’s nothing to study when you’re in grade six. 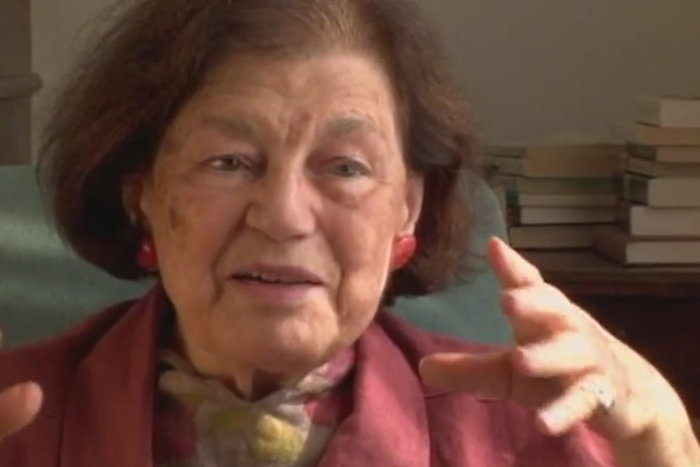 Hear The People Sing
How Many of Dick Cheney’s Problems Are Tobacco-Related? (All of Them)