George Murray is the author of five collections of poetry, including The Hunter (...

Love flattens time.
The groceries in the trunk hyperventilate beneath the locks.
Old men substitute video games for bathing.
It’s a vegetarian act to eat a predator.
The sum of the squares of the first seven primes is 666.
Practicing disdain now constitutes 60% of billable hours.
The convention centre is also a mortuary.
Dice rattle in the breath as though the chest were a craps table and each lung a cup.
Civil rights in our day is a movement against body odour.
A fat man jogs in time-lapse.
More effort goes into social media strategy than elevators.
Chinese knives lose their handles before the blades dull.
A thyroid lies excised in a dish.
The copyright text on sea salt flakes reads Calvin Klein.
Headaches keep a state of affairs more current than peace.
All the best meteors fall on Russia.
A galaxy makes devouring its neighbour top priority.
Heavy scent of makeup powder and cigarettes.
There are people who like to get liquored up before they go out to get liquored up.
The cleaned clock is full of copper and blood.
Night looks up and down both.
Bad grammar is the jewelry of fools.
Hatred and lemonade are sold at roadside stands.
Treadmills pass away under us without fear or consequence.
Mirrors are a form of time travel.
An angel fakes a broken wing to draw predators away from its nest.
University degrees are chosen like earrings.
Your morals stepped out for a smoke and fell down drunk.
All the aprons and skillets and church bells are spattered with blood.
God is not yet Santa.
Sometimes the only way to mask crossing yourself is in a nose wipe.
The Collected Dicks of Emily Poeminson.
It feels as though fruits should come from a thistle.
Supermassive black holes draw in and push out like cunts in the night.
Gabriel’s Horn is hatted by math.
There’s no more room in the basket for heads.
Theatre people practice their huggy awkwardness without fear.
Red pants don’t give a fuck.
Even the Vikings are zipping up.
It’s lazy to seek converts when there are disciples to be had.
Only at the end of the day does one notice his glasses need cleaned.
Cosmological structures know all about real estate.
We need more boots on the ground.
Bases loaded and four out.
Gravity dines at the table of you.
That line drawn in the sand turned out to be stolen from Jack Benny.
A door knob sits under a sewer grate as though thankful to catch a small break.
The sequel you wrote to Revelations is still out with your agent.
Don’t forget to change the filter.

George Murray is the author of five collections of poetry, including The Hunter (M&S, 2003), The Rush to Here (Nightwood, 2007), and Whiteout (ECW, 2012), one collection of aphorisms, Glimpse (ECW. 2010), and one book for children. A second collection of aphorisms and second children’s book will appear in 2015. His poems appear widely in magazines including Granta, Iowa Review, Lemon Hound, London Magazine, New Welsh Review, Radical Society, and The Walrus. He lives in St. John’s with his wife and their Brady Bunch. 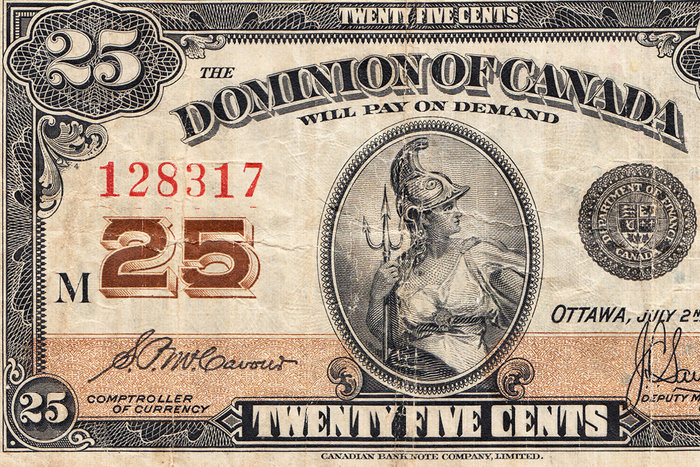 Society
Cultural Currency: What Our Money Says About Us
Given the environmental compromises required for Canada’s evolution into an energy giant, it’s no great…

New Tabs
The Conservative Art World, the Unimproved Speculum, and the Great Leveller