“We Have to be Brave Enough to Be Vulnerable”: An Interview with Laura Raicovich

The author of Culture Strike: Art and Museums in an Age of Protest on the myth of neutrality, collective culture, amd museums’ responsibility.

Tatum Dooley
Tatum Dooley is a writer based in Toronto. Her work has appeared in...

Two acts of protest have defined the art world in recent years: Nan Goldin’s activations and protests against the Sackler family’s involvement in the art world, and the open letter and outrage around Dana Schutz’s painting of Emmett Till at the 2017 Whitney Biennial. The latter is still divisive, and the art world remains fractionated by debate over censorship and the everyday horrors of white supremacy. These conversations are nuanced, complicated, and at times heated—as is Laura Raicovich’s book, Culture Strike: Art and Museums in an Age of Protest (Verso Books).

Culture Strike is not a neutral book clinically recounting these tensions. To do so would go against Raicovich’s dismissal of museums’ claims to themselves be neutral. “The problem with neutrality as a claim for a museum is that it fundamentally neutralizes any criticism, dissent, or alternate history that it might present,” writes Raicovich. Raicovich practices the recommendations she makes in the book by displaying her lived experience, allowing the reader to understand how her position influences her views. In the introduction, Raicovich outlines her time as the director at the Queens Museum and her later departure. After a tense disagreement with the board about allowing the Mission of Israel to rent the museum for an event that included a speech by Mike Pence, Raicovich departed the museum.

“Failures, particularly public ones, can be spaces of growth and learning for cultural institutions (indeed for all of us) as long as they are accompanied by an accountability which their publicness engenders,” writes Raicovich. “Plus, revealing these vulnerabilities through open discussions is far more interesting and illuminating to the public from a pedagogical standpoint, and further distripts uthe fiction of any neutral position,” she continues. Raicovich proposes a different status quo for cultural spaces, one slower and more considered, where museums reflect the community, and in doing so, influence society.

Tatum Dooley: I’m interested in how you structured the book. To me, it feels like an anthropological study of American museums, especially in the last decade. You lay out texts and open letter responses as if they were artefacts, and then you contextualise them. It felt like walking through a museum. I wonder if you were thinking about those things?

Laura Raicovich: I wasn’t thinking about those things, but I think that’s funny that you say that. My biggest concern with this book was to convey this story in a way that would appeal to not only specialists. I felt like the storytelling was really important. So the structure of the book comes out of a desire to engage people who aren’t museum people or work in the field.

I thought it was really important to focus on the open letters, because I thought the language was so important. The language that people used in different positions to relay why they felt a certain way. To me, it was important to analyse that for what it said about this particular moment in time when this thing happened. It was really intense and there were a lot of big feelings. But also, to be a bit more analytic: the staff at the Whitney was saying this, the director of the Whitney was saying that, and this is where I saw friction, as somebody who had been both inside and outside [of museums]. I thought that was the place that I could provide something that was of value to readers.

I’m interested in the way you tackled the Dana Schutz controversy in the book. You framed the removal of art as a choice on behalf of the artist, made after reflecting on what the community was saying. I think the distinction [of it as a choice] is an important one.

I really like the way that Sam Durant and The Walker [Art Centre] dealt with “Scaffold.” I felt like there was a really beautiful generosity and acknowledgement of the harm that had been caused by that work. What I liked about what they did in that situation was they made the offering, it was part of making amends for causing harm. I think that with the Dana Schutz piece, it was up to the curators, The Whitney, and the artists to have that conversation and, just like the people at The Walker, come to their own conclusion. And clearly, they did. I do think that it is up to the artists to lead the conversation, because it’s their work no matter how the institution has framed it. As a creator, you have a responsibility to think about how people receive that work. Of course, as a public institution, you also have a responsibility to contend with how people are going to receive that work.

I think my bias as a journalist is, when something is published in a newspaper or magazine, it can’t be taken down. There can be an editor’s note attached, or they can publish other things and responses. Once things start getting taken down or censored, there’s the risk of people with political or financial power trying removing things they don’t like. And then there’s a threat to democracy. But I understand that journalism and art are different things. I wonder if the same risks might be present, though?

Absolutely. I think that there are ways that cultural spaces protect artistic speech. When I talked to Rebecca Solnit, she talked about the difference between objectivity and neutrality. You can be clear about your position, and as a journalist, you should be honest about that. But you’re not neutral. You have a position, .You have all of your life experiences and where you come from. All of that is built into your lens, how you see the world and interpret it. Acknowledging that is really important. The Whitney did a brave thing on one level by showing [Triple-Chaser] by Forensic Architecture and Laura Poitras at the last Whitney Biennial, a research film that researched the tear gas made by Warren Kanders’s company. That was brave, because he’s one of their major donors. And he still is, in the sense that the funds that he gave were pretty significant. But again, it’s interesting, the way the guise of neutrality has played into that relationship, [the idea that a] museum is neutral and just presenting what the artist believes.

In the book you touch on the failures of institutional critique. How, when a museum separates itself from the politics of the art, then they can have work by Andrea Fraser up and still not be paying their staff properly. The work allows a disingenuous way out, a cover.

Exactly. It creates a strange cover that on one hand, [the museums can say], “That’s the best we can do, because we’re super dependent on [investors].” But at the same time, it amplifies this problem of wealthy people who are supporters of museums, who everyone thinks of as a piggy bank. There’s this widening gap between staff and boards as the wealth gap in the United States gets even more dramatically enormous. There’s a gap between the life experiences of somebody who might be on the board and somebody who might be on staff. There’s a real gap in mutual experience. If [cultural spaces] can each take on their own biases and acknowledge them and think through what being a more equitable cultural space means for them, maybe there’s some clues in that to how we deal with bigger societal questions, because those [cultural spaces] so closely mirror the vast inequities that we are dealing with. These institutions that are perceived as elite spaces can be useful to us in sorting out how we deal with the bigger problems, because they are actually a space that we hold in common, if we claim it.

Specifically in the Philip Guston chapters in the book, where the decision to delay the show is [to take time to figure out] how to contextualise the work, part of me wondered, how much should the museum be involved in that? And how much is it the viewer’s role to be able to make their own decisions when thinking and looking about art?

I’m very torn about this, because it goes back to our free speech conversation and the reality of historical harm being done to certain people. That decision [to delay the Guston show] happened at a very particular moment in U.S. history, with the reality of George Floyd’s murder, Breonna Taylor’s murder, and so many other Black people who were killed by police. Particularly in the cultural sector, where you’re interpreting an image made by a white man of a white man in a Ku Klux Klan hood, you have to deal with the contemporary context. There is an educational role that museums need to play. The artist’s relationship to social justice needs to be known. My point about the decision was that decisions overall get made too quickly. Sometimes you want a slow decision. Sometimes you want to be having multiple conversations that take hours and hours to really get into it, to figure out what the right thing to do is. The fact is that institutions are not blank buildings that make decisions, but are actually a collective endeavor of individual people who make work on a day-to-day [basis]. I think that’s often lost.

I think that’s also connected to your points about neoliberalism. How the speed and demands of museums, and the demands put on artists, is kind of disastrous. Both to the content, to our institutions and artists.

I think that speed has exponentially increased over the last several decades in ways that are not only about communication, but are about accountability. We have to be accountable for the decisions that we’re making. We can’t really do that without taking the time to actually make a decision properly. Part of what I want to say about the book is that anyone who’s trying to make things better is gonna fuck up. We have to be brave enough to be vulnerable. We have to learn how to apologise without demanding forgiveness. We have to make amends in ways that are constructive. There are all these ways that we need to adjust how we interact with one another. Sure, there are easy things that we can identify that we should be working on. But at the end of the day, this needs to be a collective effort. I’m only one person and these are collective decisions about our collective culture and how we want to live.

Tatum Dooley
Tatum Dooley is a writer based in Toronto. Her work has appeared in Artforum, Bordercrossings, Canadian Art, Garage Magazine, Lapham’s Quarterly, SSENSE, Teen Vogue, The Walrus and more. She is a contributing editor at The Site Magazine.

Art
Rothko at the Inauguration
A story of America in three scams. 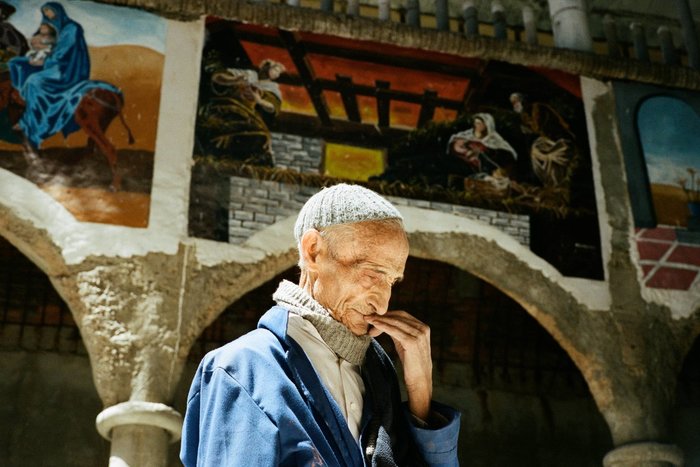 Religion
Sacrifice
An eccentric monk’s singular scrap cathedral reveals the chaos and genius of his mind.