Torture Your Darlings: On the Coen Brothers’ Cursed Characters

Joel and Ethan Coen don’t just challenge their characters—they punish them, humiliate them, are even accused of hating them. But just because they put their creations through the wringer, doesn’t mean they delight in their despair. 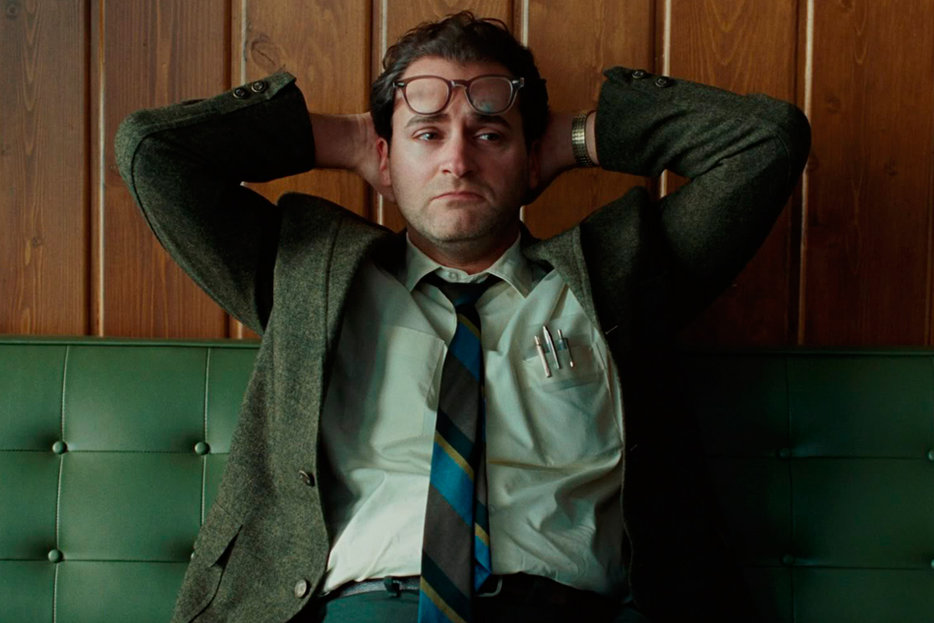 Of the great many heroes devised and depicted by Joel and Ethan Coen, few have survived their stories unembarrassed and unscathed. A brief survey is in order: John Getz’s Ray, the over-trusting dupe at the center of Blood Simple, gets himself shot and killed pointlessly after acting on a misunderstanding. Barton Fink’s eponymous lead, while he survives a final encounter with John Goodman’s frenzied madman, finds himself banished to contractual purgatory without even a solitary credit to show for his toil. Tim Robbins’s Norville Barnes proves his dubious worth as the titular Hudsucker Proxy by introducing yet another frivolous and short-lived craze “for kids.” The demise of Josh Brolin’s Llewelyn Moss is anticipated with such certainty that No Country for Old Men doesn’t even bother to show it, eliding all but the aftermath and a bullet-riddled body. And Larry Gopnik, Michael Stuhlbarg’s much-beleaguered physics professor and the protagonist of A Serious Man … well, what doesn’t happen to Larry Gopnik, whose relentless punishment feels veritably divine?

In fact, by my estimation, the only major Coens character to make it through a movie with their body and soul intact is Marge Gunderson, Frances McDormand’s small-time cop in Fargo. Almost as a rule for the Coen brothers, though, humiliation and harm are dramatic inevitabilities, no less obligatory than conflict or resolution. Over the course of ninety-plus minutes, they can hardly be avoided.

For many critics this tendency betrays, among other faults, a deficiency of empathy and care on the artist’s part—one that seems, for some, tantamount to hate speech. True, it’s probably tempting for comedy writers to use their characters as foils for their personal frustration, and it isn’t difficult to see the appeal in putting your inventions through the proverbial wringer, affirming that at least in the realm of fiction, artists retain a rare control. But conventional wisdom dictates that any temptation to mock, deride, or otherwise run down one’s characters ought generally to be avoided, lest an artist be accused of pettiness and cruelty. The world of art and culture can hardly have audiences going around hating characters, after all—it’s the responsibility of great art to deepen and enrich our capacity for empathy and feeling. Ridicule simply will not do.

The Coen brothers are doubtless familiar with these kinds of allegations. Indeed, they crop up with redoubled fervor every time they dare to release a new film. But in recent years, the denunciations have begun to accelerate, and it seems they’ve gathered an intensity that threatens, perhaps, to eclipse their otherwise sterling critical reputation. Their greatness, of course, will survive these slurs and drubbings. But I worry that those suspicious of the Coen sensibility may be unduly swayed.

It doesn’t help that the campaign against the Coen brothers is being led by critics of such sophistication and esteem. One of their first and most vocal detractors was the Chicago Reader’s Jonathan Rosenbaum, a great critic occasionally possessed of an overactive social conscience. In thrall to a deeply progressive, perhaps even reactionary ideology, Rosenbaum seemed for many years uniquely equipped to contend with the social and political implications of Hollywood films, taking even the most widely celebrated blockbusters to task when he perceived beneath their gleaming veneers a philosophy of more insidious significance. But if your approach to criticism is fundamentally ideological, you naturally wind up valorizing those films whose ideological dimension happens to align with your own, as if such an agreement itself has artistic merit—and vice versa.

In any case, much ideological friction is evident in the writing: discussing Barton Fink after its theatrical release in 1991, Rosenbaum—after describing having “walked out of Blood Simple” and castigating Raising Arizona for evincing a “crass, gratuitous condescension toward its country characters”—dismisses everything Barton has to say as “cynical, reactionary, and/or banal to the point of stupidity.” He goes on to write that the Coens’ thinly veiled portraits of both Clifford Odets and William Faulkner (as Barton and his makeshift master Mayhew, respectively) are crude practically to the point of being libelous—as if the reputations of Odets and Faulkner stood to suffer such embarrassment that they couldn’t recover without preemptive critical resuscitation. The problem, for Rosenbaum, is that the Coens don’t seem to particularly cherish or value anything, least of all their characters. And, since these characters are meant (perhaps) to represent real-life literary heroes and the self-professed advocates of the working class, the only reasonable conclusion is that the Coen brothers believe everybody to be phonies.

What is there but affection in their portrayal of the sometimes dopey Big Lebowski, or in the hapless Hardbodies of Burn After Reading? They are punished, sometimes unfairly, but such is life. The point of a film like No Country for Old Men isn’t to delight in the debasement and death of its heroes—far from it. Its register is tragic precisely because its heroes are endeared to us.

Joining Rosenbaum in his distaste for the Coens’ various mockeries is J. Hoberman, formerly of the Village Voice, and a writer whose body of work represents one of the most valuable contributions to film criticism in recent history. But even great critics are dead wrong some of the time. In a recent piece in Tablet, in which he sought to lambaste Inside Llewyn Davis for its recent (and similar) transgressions, Hoberman summarized the sensibility of the Coen brothers by declaring that they “take pleasure … in bullying the characters they invent for their own amusement.” Barton Fink was again the primary target. Referring to the confrontation between Barton’s self-righteous but ineffectual artiste and Charlie’s garrulous and obnoxious everyman, he argued that the Coens “stage a virtual death match between two then potent stereotypes … without any hint that their minstrel battle royale was occurring at the acme of worldwide anti-Semitism.”

Now, it’s certainly the case that these two archetypes are thrown together in a kind of exaggerated confrontation, replete with a backdrop of a blazing inferno and a shotgun-wielding climax. But worldwide anti-Semitism? In Barton Fink, it’s what we call a structuring absence: it’s present as nothing but hints, made all the more conspicuous by being so oddly unmentioned. Barton and Charlie, you may recall, are pursued toward the end by two detectives, quite brazenly named Deustch and Mastrionotti—German and Italian, respectively. Would the point have been clearer had they been Detectives Hitler and Mussolini?

But never mind. The Coens take pleasure in enacting various tortures on their schlubby, gormless anti-heroes—and that, in the favored critical parlance, makes their films hateful and condescending and, harshest (and trendiest) of all, misanthropic. This assessment, though, seems to have two main problems: the first is that I doubt whether the Coens really do hate their characters after all, as many of them, though they suffer, are redeemed in our eyes as earnest or well-intentioned or otherwise endearingly flawed. What is there but affection in their portrayal of the sometimes dopey Big Lebowski, or in the hapless Hardbodies of Burn After Reading? They are punished, sometimes unfairly, but such is life. The point of a film like No Country for Old Men isn’t to delight in the debasement and death of its heroes—far from it. Its register is tragic precisely because its heroes are endeared to us.

The second problem is more foundational. I don’t know, for sure, that a degree of mockery, or even punishment, is something to be avoided on principle. Torturing heroes, portraying them badly—if these were the central criteria for denying the greatness of art, we’d have to throw away Portnoy, throw away Humbert Humbert. Even Don Quixote, with his infinite trials and tribulations, wouldn’t survive such scrutiny. His pain makes Larry Gopnik, or for that matter any Coens hero, look kindly treated by comparison. Surely they can handle it. 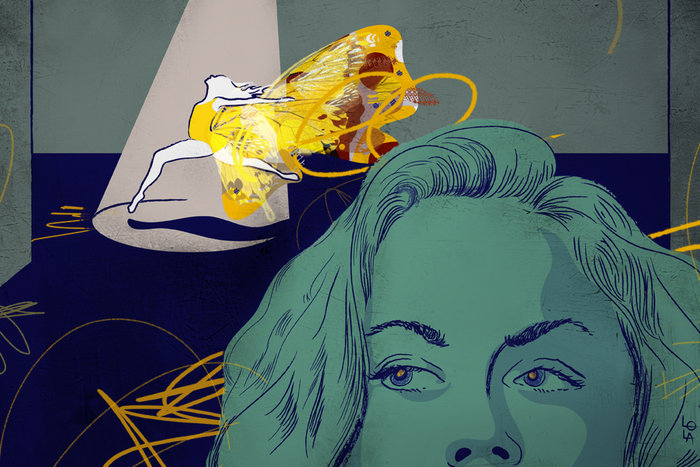 Tabloid Fiction
Butterflies Are Free to Die
From the ongoing series Tabloid Fiction—in which an author chooses from the trashiest, most lurid, or just bizarre…