The director of Chevalier on character development, masculinity, and why kissing is really kind of weird. 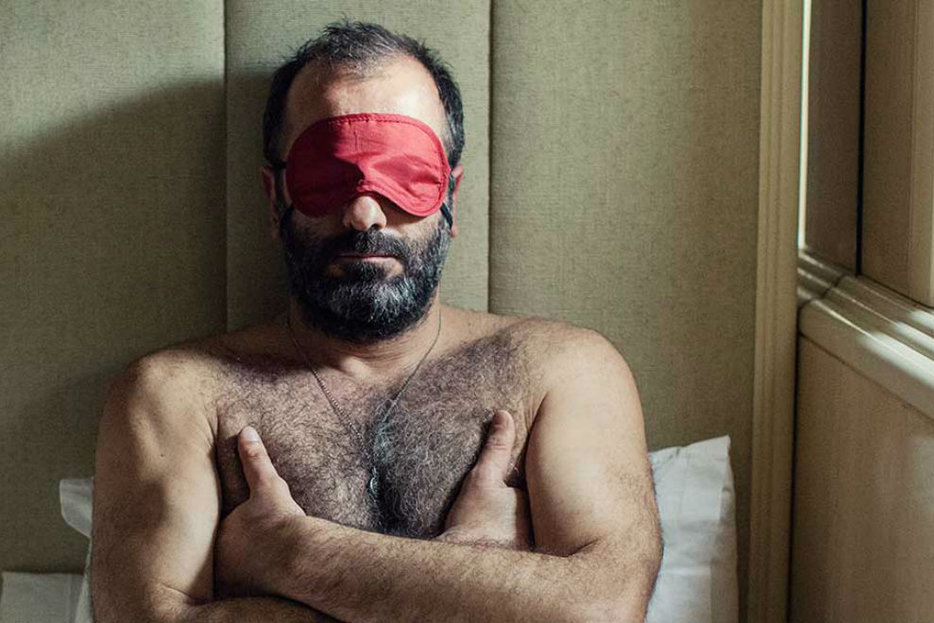 It seems a little disingenuous to say that Greek cinema is having its moment, given that the moment in question has been going on for more than half a decade now. But it remains true that the Greeks are as inescapable a presence in the international arthouse as the Romanians were ten years before — particularly now that Yorgos Lanthimos, the new wave’s leading light, leapt to Hollywood this year with his absurdist comedy The Lobster. The real star of the movement, though, is Athina Rachel Tsangari, a producer on the Lanthimos breakout Dogtooth—and therefore one of the architects of the Grecian rise to fame—and a stellar auteur in her own right.

Tsangari found acclaim on the festival circuit many years ago with Attenberg, her rather idiosyncratic coming-of-age story, and was introduced to more mainstream audiences as an actress in Richard Linklater’s Before Midnight, which she also co-produced. She returns as director this year after a too-long absence with Chevalier, her finest feature to date. Chevalier is a sort of high-concept social satire in the tradition of Luis Bunuel, in which six middle-aged men, at sea on a fishing expedition, organize a trip-long competition to determine who among them is the ultimate man—the best not by any one standard but by every standard imaginable, from teeth-brushing to fish-catching to (of course) penis size. It’s an uproarious lampoon of machismo and a great film about the competitive spirit and how badly we all want to win.

We sat down with Tsangari during the Toronto International Film Festival last September.

Athina Rachel Tsangari: I remember you.

Calum Marsh: We did meet briefly, a few years ago.

Was it at the Town Crier?

It was at the Town Crier.

My favorite bar. I haven’t been this year. It’s the big hub—every night it seems like everyone goes there. It’s really nice.

So, I really like the film. But I understand you’ve recut it, or are still recutting it?

Yeah. Not big differences, not huge—but for me they are. In a way I’m having another world premiere tonight. It’s just that I didn’t have the time to do all the stuff I wanted to do before [the film festival in] Locarno. I was cutting and mixing up until the last moment. I worked to make the rhythm a bit better between the scenes.

Do you often feel tempted to continue working on a film after it’s finished?

No, but this has been a particularly difficult one. It took me some time to figure out the balance and the order of things. It’s the first time that I’m working with so much dialogue. It was a big challenge for me. I’m cutting, and then I’ll leave it alone for a couple of months, then approach it again, re-attack it, change my mind. It was difficult to figure out the dynamics between everyone, and also to decide what to keep and what was superfluous or repetitive or too long.

The dinner scene, where they decide the game, was initially 25 minutes. It was really fascinating. There’s something to be said for following the natural evolution of people deciding to play a game they’re inventing in real time. It was interesting to me to cut it down. We had rehearsed the shit out of it for a couple of weeks—because that was the cornerstone, you know, where people’s personalities were coming through. I think I’ll put it on the bonus features some day. Of course DVDs don’t even exist anymore so… maybe I’ll put it on YouTube or something. That scene is completely self-sufficient as a short film. It has a beginning, middle, end. All of the characters are introduced.

You get to know the characters really well even in the short version of that sequence. You make it easy to distinguish them from one another because they seem quite unique.

My writer, Efthymis Filippou, isn’t very interested in being too specific in terms of character description, backstory. Neither him or I work with psychological attributes or histories behind people—never. I work in a similar way in all of my films, from the shorts a long time ago until now.

Did the film begin with these men?

At first it was like, a bunch of humans. Not necessarily men—just a bunch of humans, in a capsule of some sort. It could be a spaceship, a summer house, a prison cell. It could be a tunnel, a bank, a box office, an elevator. I had almost a fetish for similar things in a frame. That’s why, for example, I love watching nature documentaries: I love to see a flock of birds or a herd of buffalo. Antelopes running, you know. This magical beauty of the same in multiplicity that does something to me—I hyperventilate with pleasure and joy and admiration for that. I love that idea. The first image I started with was these women in black. All women in Greece eventually become women in black because they lose someone. It’s something that’s part of your visual landscape growing up. Mourning.

Did you develop the characters based on the men you hired to play them?

It’s almost indistinguishable for me, the actors and the characters. I work with the attributes of the people I cast to develop their characters.

Yeah. And their personalities. When I did my previous short, The Capsule, it was all women. It was fascinating to me to see the power dynamics and the sort of dance that developed between the actresses—and at the same time the characters. Working with the same gender was so interesting to me. To see how much masculinity and femininity manifested itself, and switched itself constantly among these seven girls. So I thought I’d really like to see how the same thing would work with men.

Yes. I cast it with very strong egos. Very different manifestations of ego, but very very strong, each one of them. Then we chemically reacted with each other, for about a month, a month and a half. They brought a lot with them, these men. They brought their own contests, and we voted on what contests were going to stay.

How many contests did you have originally?

We had about fifty. Efthymis and I had developed some for the script. Some others, by workshopping them, did not work out so well, and they were replaced by contests developed by the actors themselves. They were very excited. That was their homework, to figure out what contest their character would suggest. In the film you never see that. I was not interested in showing any of the mechanics—the point system, or any of that. But you would assume that this was something they would all have to decide. Yannis, for example, comes up with the dick-measuring contest—the morning erection, you know. They came up with about ten each, in the end, and then we voted on them. There were some hurt feelings, sometimes people would complain, or say, “pick mine!”

The competitors competed for real!

Were you interested in how the contests would work visually, rather than just dramatically?

Of course. It’s all about the same choreography. I don’t distinguish these things. Also it was a matter of practicality—this is a low-budget film. I would have loved to do some very spectacular contests using the sea and sports and … I don’t know, having them rock climb or something. But we didn’t have the budget for that. In the end, though, I realized it was nice to keep it on a small, gestural scale, with contests that go from logical to absurd. For example, we all brush our teeth. If you look at it from a distance, that’s completely absurd. Same with kissing. Sometimes I try to be an alien. I look at us two million years from now and just doing these things. [Athina mimes making out with someone.] Why? But this liminality because logic and absurdity, where it at every instance depends on the distance from which you will see it and the lens through which you will see it … this fascinates me.

One of the ideas posed by the film is that, although we’re always open to scrutiny and judgment at any moment in a million small ways, we have an unspoken agreement that we aren’t going to do anything about it. The social contract dictates that the details remain mostly invisible…

But you are self-aware, aren’t you?

The movie made me more self-aware. Do I brush my teeth weirdly? How would I fare?

But does the film suggest it’s men who are more fixated on this stuff? The metaphorical—and literal, I guess—dick-measuring?

You know, to me it’s not a film about men. It’s a film with men, but it’s about humans. I’m not sure how different it would be if this film was with women. But if it was the same film with different men, it would be different and similar at the same time. Imagine this film with another set of actors. With A-list American actors. So instead of reducing it to males and females, I’d rather reduce it to a combination of different personalities.

The contests would be similar either way?

I think the contests would be very similar if I did it with women. And the process would be similar too: I have a very restrictive process. It was not like anything goes and let’s just have fun. The film looks like it didn’t obey any rules and was just a string of arbitrary contests, but there were lots of rules. Otherwise I would have completely lost control of focus. To me the primary thing was to show the arbitrariness of victory. And the arbitrariness of judgement. What’s normal, what’s not normal, what’s good, what’s bad. These arbitrary, binary evaluations—that’s tyranny. Whether it’s the law or sex or education. It’s this arbitrary canonization of what’s beautiful and what’s ugly, or what’s proper and improper. I didn’t want to resolve that or give closure.

The contest doesn’t end in a triumphant victory.

No. In the end someone won, in a completely ridiculous way. And then what? They went back to their lives, which were unimportant to begin with—or else the moment the boat docked they would have gone home. They wouldn’t be lying to their wives, or showing off to each other. 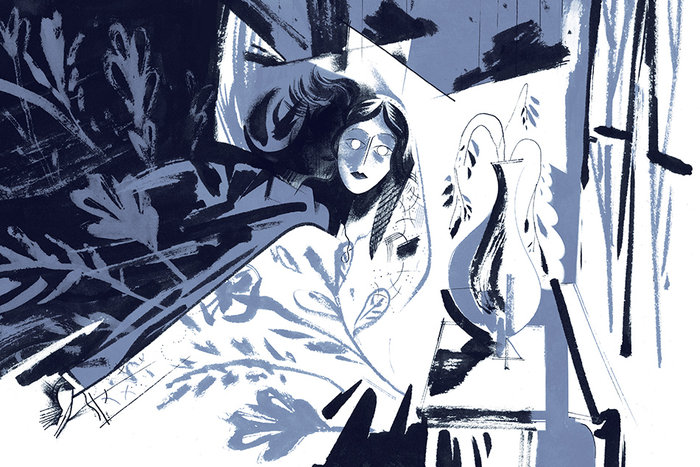 Culture
Our Adored Cadavers
From the heartsick graverobbers of early Romantic literature to the latest gritty cable crime drama, the dead woman is… 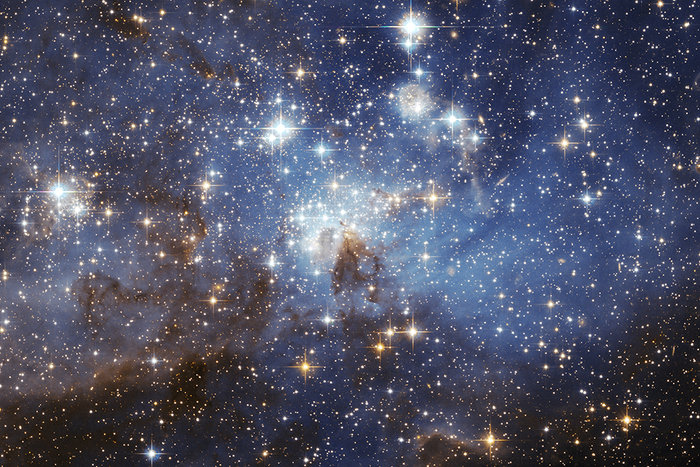 Written in the Stars
My Favourite Bullshit Pseudoscience
Any provisional understanding of what’s going on in your head is comforting—even if that understanding is a fiction….