In Praise of the Grotesque

Children’s literature, from Aesop to the Brothers Grimm and more recently Roald Dahl, has always operated in the realm of the grotesque. Re-watching the film Gremlins almost three decades later—its script very loosely descended from Dahl’s first published story, and at the time of its release derided by critics for being excessively gross—is a reminder that what many kids will always love is simply good old fashioned mayhem. 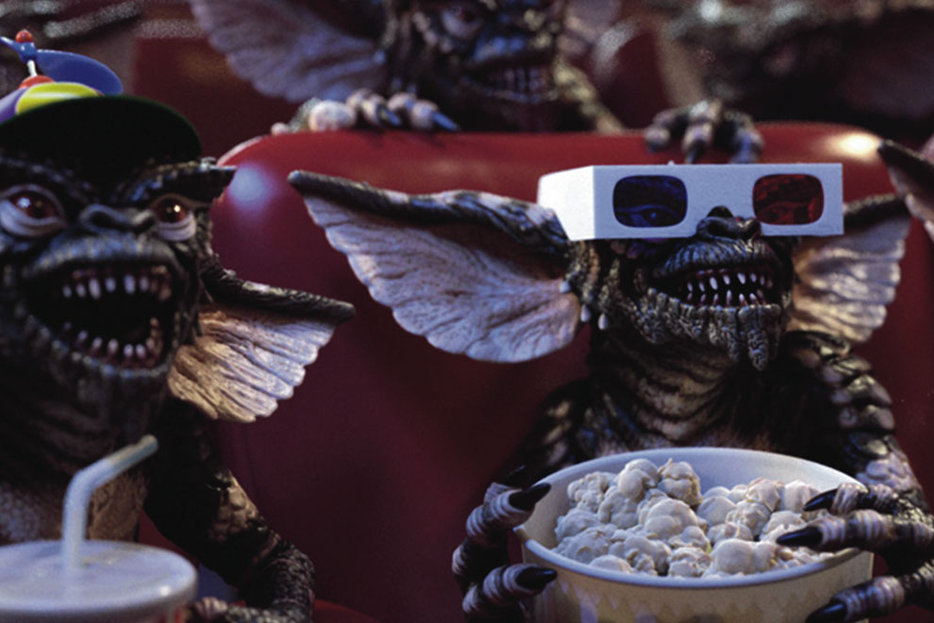 On a recent trip across Canada, I was surprised to discover Gremlins offered among the inflight entertainments. Directed by Piranha’s Joe Dante, this was one of my favourite movies as a kid; I owned the tie-in colouring book as well as a stuffed replica of Gizmo, the adorable, warbling fur-ball whose naïve mishandling wreaks havoc upon the town of Kingston Falls. Serendipitously, I’d been trying to write something about Roald Dahl, whose first published children’s book was not, as is commonly assumed, 1961’s James and the Giant Peach, but a Disney-published story about little green men called The Gremlins nearly twenty years prior.

The term “gremlins” was first used among British pilots in World War II to explain any aircraft malfunction during battle—a literal ghost (or ghoul) in the machine. Commissioned to promote an associated, though never produced, Disney film, Roald Dahl’s The Gremlins features “a little man, scarcely more than six inches high, with a large round face and a little pair of horns growing out of his head,” and hordes of his meddlesome brethren, versus the Royal Air Force. Similar creatures have since appeared in Loony Tunes shorts and on The Twilight Zone (an episode aped on The Simpsons), but, most iconically, or at least eponymously, in that 1984, Steven Spielberg-produced motion picture.

As my flight soared 30,000 feet above the prairies, and Gremlins played on that little eight-by-ten screen, the video struck me as less inspired-by-Dahl than a contemporary redux. The book begins with a pilot forced down by a creature boring holes into his plane’s fuselage; in the movie, mutated Mogwai get up to all types of mechanical shenanigans, and are even called out by name by a paranoid redneck. While Dahl’s gremlins swear a vendetta against humanity when an airplane factory destroys their woodland habitat, the cataclysmic events in Kingston Falls are incited by similar human folly when the movie’s hapless antihero, Billy, feeds Gizmo’s siblings after midnight. (“You do with Mogwai what your society does with all nature’s gifts,” chastises the wizened Confucian stereotype, Mr. Wing.)

Beyond plot-points, the film suggests a number of corollaries to Dahl’s better known, later work, too (the Charlie novels, The Witches, Fantastic Mr. Fox, etc.) Despite being made specifically for young people, neither wallows in saccharine condescension nor treats children as innocent receptacles for pat life lessons. Instead, these are stories kids want. And what I wanted as a kid were stories that made adults reel because they were so disgusting.

Children’s literature, from Aesop through the Brothers Grimm and beyond, has always operated in the realm of the grotesque. But Roald Dahl was one of the first authors I read whose writing seemed truly gross. Trapped in Mr. Twit’s beard one might find “a piece of maggoty green cheese or a moldy old cornflake or even the slimy tail of a tinned sardine,” which their host snacks on “by sticking out his tongue and curling it sideways to explore the hairy jungle around his mouth.” In Gremlins, one of the monsters is churned to green goop in a blender—a scene whose goriness I relished as a six year-old.

Kids delight in bodily functions, slathering themselves in mud, stirring up some viscous potion from toothpaste and ketchup and apple juice—and drinking it. Being gross is fun because it breaks the rules and troubles authority (parents, babysitters, teachers, whoever). Without getting too Freudian, childhood also involves bodily discovery, and that bodies are capable of producing some of the most vile, forbidden substances is often their most perversely fascinating trait.

If François Rabelais’ writing of the “grotesque body” was a reaction against bourgeois norms, so too do works of (young adult) storytelling that oppose propriety resist (adult) power. In Gremlins, hegemony is represented by cinema itself; everything about the movie feels like a tongue-in-cheek swipe at Hollywood kitsch. This children’s horror picture, set during Christmas and released in June, guts several genres to create a “formal free-for-all [styled on] animated cartoons,” with Chris Columbus’s original, slasher-style script—graphic decapitations, etc.—edited into a just-barely family-friendly version. That Gremlins is often cited as the impetus for the MPAA’s creation of a PG-13 rating feels, now, like a taxonomical contrivance for a movie that stubbornly denied classification.

Yet Gremlins is stationed firmly in, and satirizes, the world of cinema. If Kingston Falls looks familiar, it’s because Back to the Future would be shot on the same set a year later. Flashdance is lampooned and movies play ironically in the background throughout, from It’s a Wonderful Life to horror classics to, projected at the same theatre into which Marty McFly would crash his Delorian, Snow White and the Seven Dwarfs. Send-ups include Frank Capra sentimentality—”While everyone else is opening their presents,” deadpans Billy’s love-interest, Kate, “[unhappy people] are opening their wrists.”—and the myth of Santa Claus is boldly debunked, with no bells jingling across the starry night sky to salvage some yuletide spirit.

Though considered among the greatest authors of children’s literature, critics claim Roald Dahl is casual, even callous, in the violence he metes upon his antagonists. While the Twits are done in by the “dreaded shrinks,” in James and the Giant Peach Aunts Spiker and Sponge meet an even more grisly fate, flattened by a massive piece of GMO, runaway fruit. Similarly, TV Guide has claimed Gremlins to be “cynically aimed to draw an audience of small children who would no doubt be terrorized by this myth-shattering film;” Leonard Maltin complained it was “icky” and “gross.”

Roald Dahl’s world is also critiqued as one of reductive absolutes, in which Good is signified by the humility of a character like Charlie Bucket, with his hubristic rivals representing an archetypal, antithetical Bad. But suggesting his books are morally simplistic obscures what makes them most memorable to kids: their dynamics, their imaginative power, their whimsy, and how they subvert authority—not just socially, but also narratively. Similarly, deeming Gremlins somehow harmful to young viewers misses the fact that the movie actually undercuts the formulaic “conflict theory” that underpins most Hollywood screenplays: kids don’t identify with its protagonist, a twenty-something bank teller who lives with his parents, but instead with the action of the movie. If anything, my sympathies as a six year-old, or at least my desires, resided with the gremlins—until, of course, they were killed, preferably in as spectacular a fashion as possible. And, back to Roald Dahl: what author before him might have turned his young hero into a mouse—as befalls The Witches’ Bruno—and present it as a happy ending?

Despite their similarities, the gremlins of the film and book conclude their respective stories in very different ways. In Dahl’s version, their skills are harnessed to aid the war effort: “The gremlins began to find out that it was rather nice always to be doing good and useful things, and in the end they were glad to work just for the fun of it. They were good gremlins.” With its Disney backing and subtitle (“A Royal Air Force story by Flight Lieutenant Roald Dahl”), such a drastic turn feels suspiciously propagandist—and might account for Dahl’s themes of insubordination in future efforts.

Conversely, though the anarchy that rampages through Kingston Falls, as the gremlins scarf beer and junk food and go caroling and watch a Disney movie, seems to satirize American consumerism, Joe Dante’s film concludes with a restoration of the dominant social order. The climactic scene, which, like George A. Romero’s Dawn of the Dead, takes place in a shopping centre, culminates with the last standing gremlin melting in a beam of sunlight, like a marshmallow tossed into a bonfire. The movie ends not with Billy and Gizmo reunited, as might be expected of a typical kid-and-pet flick, or even something akin to the maudlin tragedy of Lassie, but with Mr. Wing reclaiming his Mogwai.

I’d argue none of this matters. Kids don’t learn lessons from books or movies. Sure, they might be able to recite some aphoristic cliché about “being nice to others,” but I’ve seen no evidence, in years of working with them, that moralistic (or any type of) endings might in any way influence their behaviour. While little green men have suggested, at least to the Chicago Reader’s Jonathan Rosenbaum, “everything from teenagers to blacks [my incredulous italics] to various Freudian suppressions,” my memories of Gremlins are of feeling so thrilled I could barely breathe. When Billy’s mother stuffs one of the little slimebags in the microwave and nukes him, I was only delighted by the eventual, noxious explosion.

I’m not sure if this is true of all kids, but as a youngster I was oblivious to story; my engagement with movies and books was more experiential. (As an adult re-watching Star Wars, I was astonished to discover a plot.) I couldn’t recount, now, the stories of many Roald Dahl books, though I remember explicitly the BFG’s “snozzcumbers” and Augustus Gloop’s doomed gluttony. Kids need this stuff, these interstitial moments of the grotesque and gross. It’s good, I think, for young people to witness decorum turned on its ear, to see chaos reigning in the streets, to feel their desires empowered, even vicariously, in a world designed to control and contain them. 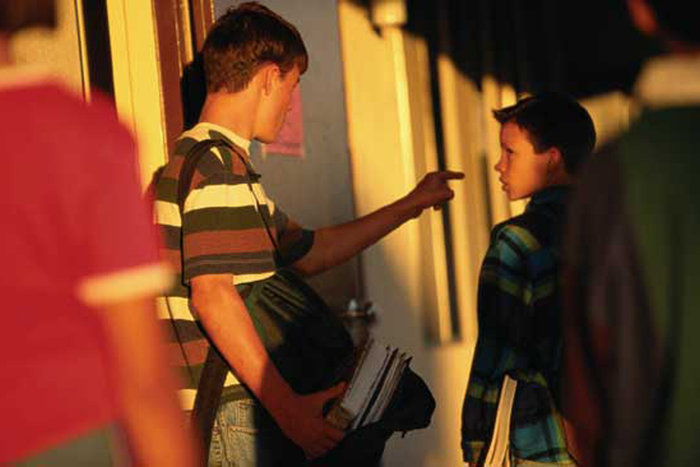 Interview
Bullying, Wrestling, and Degrassi: A Conversation with Susin Nielsen
In Susin Nielsen’s latest YA novel, The Reluctant Journal of Henry K. Larsen, a 13-year-old boy comes to grips… 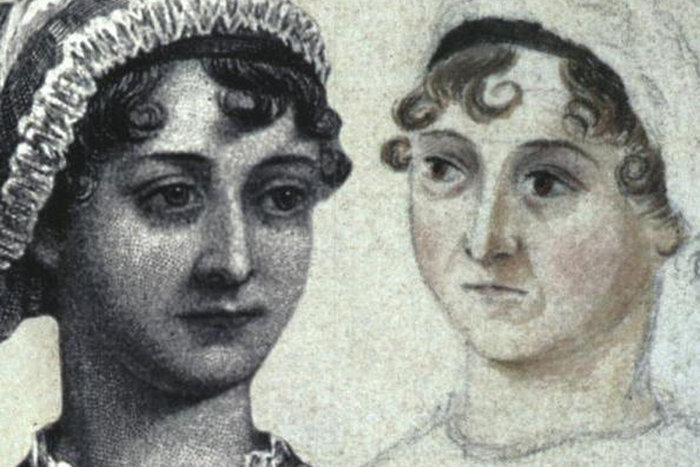 Speak Internet!
A Lady, Will Ferguson, And All That’s Spooky Scary