How Should We Feel About the Ironic Goof-Off?

Heidecker & Wood’s new album, Some Things Never Stay the Same, manages to be both a novelty album written by a comedian and a genuine ’70s throwback. It’s hard to know how seriously to take it, but it might be better that way. 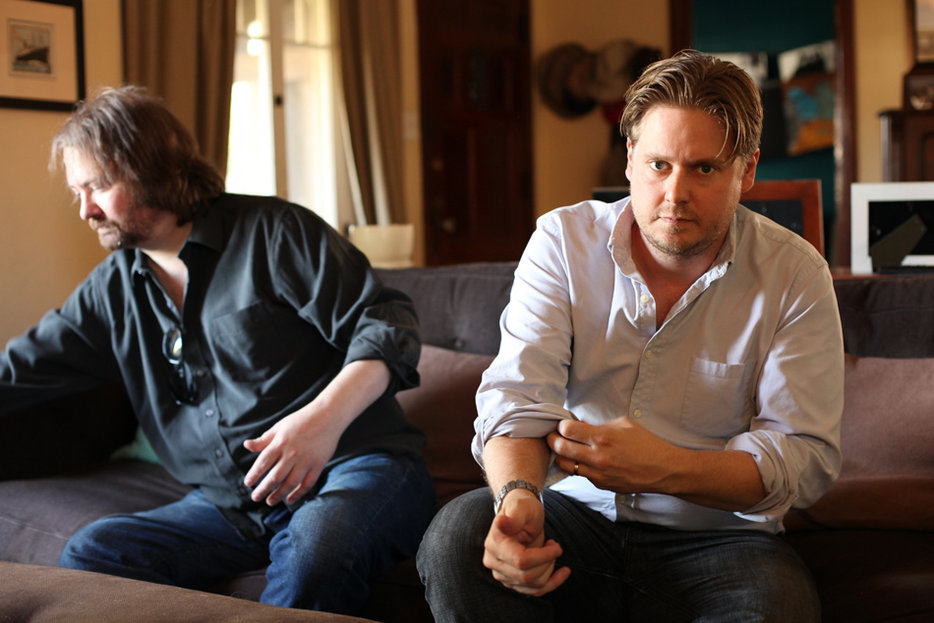 One of the greatest preoccupations of our time is the question of whether anyone Really Means It. Does he really like Steely Dan? Does she really like unicorn decals? Do they really enjoy bocci ball? We have a problem with irony panic, the paranoia that everyone’s only pretending to like what they like out of scorn for those of us who take life seriously. This is stupid for a number of reasons, the first of which is that no one ever really means anything, because that’s not how meanings work: any one individual feels about 80 different ways toward a given thing and does everything for about 80 different reasons. I hate the knee-jerk charge against irony, but that doesn’t stop me from knee-jerk hating those jokers who seem to refuse to take a bite out of life.

Sometimes this gives me conflict. For instance, I love Will Oldham, who sings about love and death poignantly enough to have warranted a cover by Johnny Cash, but when he appears in videos dancing all googly-eyed through the streets of Glasgow I get this silly suspicion that he’s been fucking with me all along. And I love Tim Heidecker, actor, musician, and one half of the comedy duo Tim and Eric [Wareheim], even though he can seem, if you squint, like the archetypal goof to whom nothing is important. This week he released an album with Davin Wood (their second as Heidecker & Wood) called Some Things Never Stay the Same, which occupies a borderland between novelty record and immaculate ’70s throwback. It’s hard to know how seriously to take his music and, as a result, it can be easy to dismiss it.

Because Heidecker often plays himself, and because his humour is a parodic sort that plays on a sense of the uncanny (slightly reframing a pat rock lyric, say, so that it becomes ridiculous), it can seem mocking, and he can seem like a jerk. It feels counterintuitive to call his humour satire—it’s more about belly laughs than big statements—but it is satire, a satire on everything: drain the meaning from worn-out media, then adjust until clichés become non sequiturs and forgettable nonsense becomes obvious nonsense. (“Algorithmic nonsense,” maybe, in the manner of Horse_ebooks or “What Would I Say?” or this wonderful flyer for “Apple Cabin Foods.”) His Adult Swim series with Wareheim, Tim and Eric Awesome Show, Great Job!, which ran from 2007 to 2010, spoofed corporate communications and public-access television, adding crude animations and CGI to mock infomercials; he and Wareheim often used eccentric performers whose self-awareness seemed questionable, and that could sometimes feel exploitative and make the duo seem flippant.

In 2012, Heidecker starred in The Comedy, a serious movie in which he plays a sort of Billy Madison without compassion, a rich Williamsburg layabout who gorges on his own privilege and dicks around at the considerable expense of bystanders and service staff. His character is the strawman hipster, a vacuous weenis who riffs but never says anything—the person non-fans probably imagine Heidecker to be. Since then he has recorded a series of Bob Dylan parodies, including a 15-minute version of Bob Dylan’s 14-minute song about the Titanic, which he wrote before hearing the real thing. I mention this mostly to note that he’s a huge Dylan fan, and that The Comedy was not supposed to glorify his character.

Heidecker is a talented musician, and the songs he writes with Wood are catchy and occasionally beautiful: tracks like “This Is Life” are more than funny, but you can feel like a bit of a fool emoting to them. The opener on Some Things Never Stay the Same, “Cocaine,” is a straight anthem to the drug, which Heidecker says he’s never done (“Give me/Some of your/Cocaine!/Keeps me awake/All through the night/All through the day”). What follows is a spoof of a love song (“I know you love me/I love you too/What else is new?/What else is new?”) and a whole lot of nonsense (“I need a Sunday Man/Oh yes I dooooo”). You wonder, as an interviewer for Noisey did, what he’s trying to accomplish. “I’m trying to entertain,” Heidecker replied.

Later in that interview, he explains, “I love the idea of creating confusion about what is sincere and what is not, and what’s a joke and what is not.” The nonsense lyrics are nonsensical on purpose, but they’re modelled after lyrics that are nonsense to begin with—a good reminder, if we’re ragging on irony, that the sincere isn’t necessarily all that sincere (here is a ‘70s song, in the mold of “This is Life,” that I love for being incredibly stupid as well as great). The music sounds good because he made the effort, and he made the effort because he likes the music. “I do love a lot of that music and then a lot of that music I find pretentious and super over self-serious and precious. But you do have to love something secretly to make fun of it.”

Heidecker is, from all accounts and to all appearances, a normal man with regular emotions. (Fact: he once took a knife to the back protecting an elderly neighbour from her son.) This came as a surprise to me initially. After we’d gone to see Tim and Eric’s Billion Dollar Movie—which, side note, disturbed me for weeks and had me internally chanting, “Shrim! Shrim! Shrim!” every time I used the office coffee machine, for reasons you might not want to know—my friend mentioned that she’d lurked Heidecker’s Facebook page. When I got home, I lurked him too. I’m not sure what I expected, but I know that I was not expecting to find a picture of him and his wife riding the East River Ferry to see The Book of Mormon, or an album of photographs from his wedding. I should not have been surprised that Tim Heidecker is a human with a human life (he recently had a baby!), and I probably shouldn’t have lurked his Facebook page in the first place, but I don’t have much to say for myself except that people have a way of flattening at a distance, and for some reason he seemed like fair game.

Humour can sometimes seem scornful, but at its best, it’s humane (and for humane, watch Heidecker play the protective single dad in Dinosaur Jr’s “Watch the Corners”). Likewise, the humane is best when it’s funny. That’s why I love Will Oldham: he muses about death and then devolves into made-up little kid words. He takes a joke where he can find it and lets dread and joy coexist in his work the way they do in life. And yet I’m suspicious of his work for the same reason I cherish it, because my ego is feeble and demands a barrier between funny and serious so that I’m not moved for the wrong reasons. Really, all the best work is both at once: David Lynch is David Lynch for his sense of humour. Heidecker & Wood albums are twofers, and if you find yourself embarrassed for singing along in earnest you can just laugh at yourself.

Loving anything means loving with irony—things and people because their flaws are amusing, and life because even the worst of it can become material. The best and most reasonable gift one could hope for is a mind nimble enough to always find the funny; the second might be a collapsible ego.

Image by Nick Weidner via 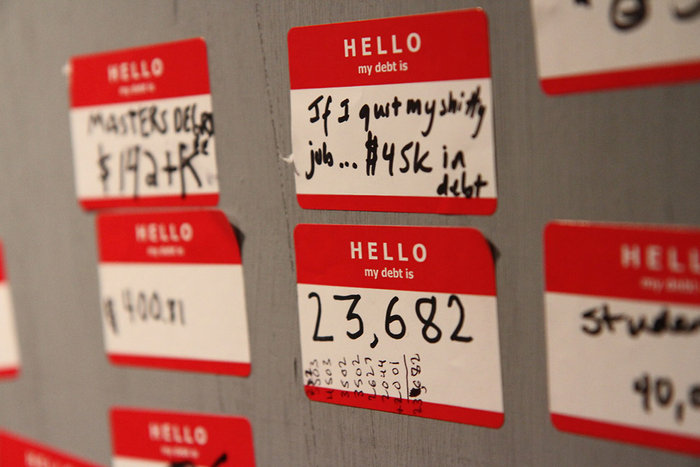 Society
From the Ashes of Occupy: On Failing Better and Erasing Debts
The documentarian-turned-activist writes about a campaign’s unexpected success in erasing Americans’ personal… 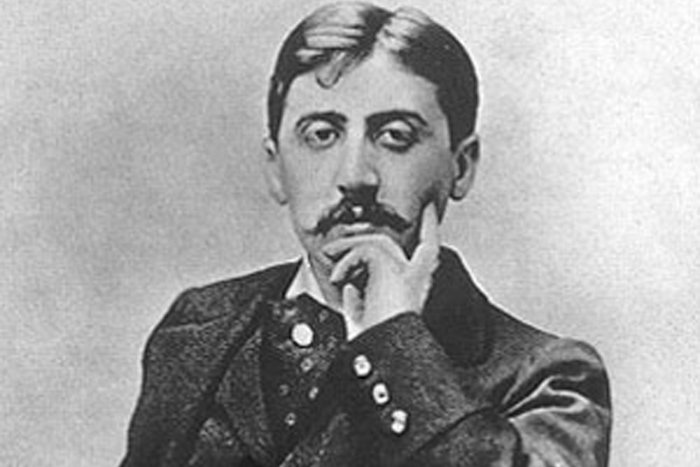 Speak Internet!
How Narratives Can Help Us and Hurt Us