The Gentle Art of Pretending to Understand What’s Going On

Listening to a man you yourself find funny laugh at jokes you don’t get is, in retrospect, a master class in learning to read social cues. 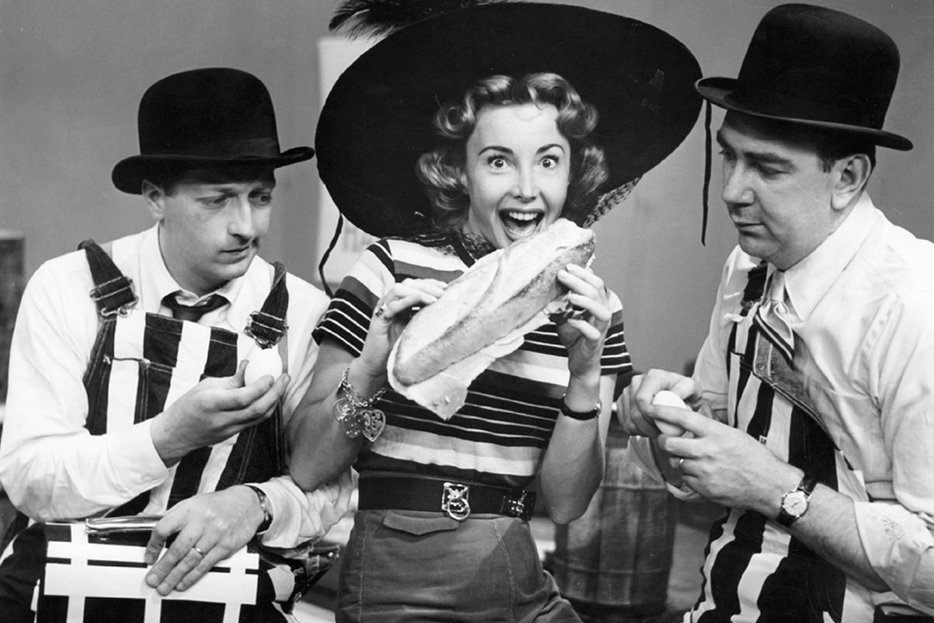 Ray Goulding, Audrey Meadows and Bob Elliott on the Bob and Ray Show in 1951.

My father has, since I was a small boy, imparted to me a great amount of useless knowledge. While teaching me to build and repair absolutely nothing in the physical world, he has shared with me the inner workings of the Democrat machine in 1980s Albany, a number of Dinah Shore jokes, and enough minutia about Haile Selassie to fill five full minutes of cocktail party chit-chat (despite the attendees of the sorts of cocktail parties I’ve made it my life’s work to be invited to being far more concerned with the first Interpol album and who might be carrying drugs). My father, working with precisely ten Peace Corps stories and the dim memory of jazz albums he doesn’t really listen to anymore, has passed on little of pragmatic value. But perhaps the least useful thing my father has given me, in a lifetime of not once telling me how cars or girls work, is an endless love of Bob and Ray.

Bob Elliott and Ray Goulding were a comedy duo, two “straight men” as the Times’s recent obituary for Bob Elliott referred to them, who started appearing on the radio (and, later, intermittently on television) in 1946 and then for much of the second half of the twentieth century. Their style, whether they were performing skits parodying radio drama (in The Life and Loves of Linda Lovely, following the epic non-events of David and Linda Lovely as David works as a flag-sitter and peanut crusher at the local peanut butter factory and Linda does very little indeed, or Matt Neffer, Boy Spotwelder, a wild and wooly extravaganza of arbitrary sound effects—paper being rustled, mostly—and endless, pointless exposition) or the news (with their famous nasal-voiced reporter Wally Ballou), was deadpan to the point of coma. Very little ever happened, and yet, if deadpan parody in which very little happens is perhaps your or your father’s vein of humor, they were hilarious. I’d say you had to be there, but I’m not sure it would have helped.

Ray died back in 1990; Bob (who was also the father of national treasure Chris Elliott) died just last week on February 2 at the age of 92. I wrote my dad about his death, but of course he already knew. He replied immediately:

“O Bob Elliott! O lost! I read the Times obit and started laughing and Joe wondered what on earth I was reading. I had to admit it was an obituary. Great quotes from the routines. The obit did not mention that Bob and Ray—or as they sometimes identified themselves, Boob and Roy—were on the Mutual Radio Network for about a year in the mid-fifties. They were on every weekday at 5 for half an hour. Mutual was the hick-town (including Lock Haven) radio network that specialized in the kind of pompous twits Bob and Ray made fun of, so how they landed their, even briefly, is a mystery. Mutual had a nightly news show with a guy named Westbrook Van Vorhees, who sounded like his name. It was like a 1940s newsreel with military bands introducing each overblown report. The network had two pro-McCarthy (Joe, not Gene) right-wing commentators. One of the great loony Mutual moments was when Fulton Lewis Jr. reported indignantly that a public university had students reading Ginsberg’s ‘Howl.’ To let listeners know exactly what un-American filth their tax dollars were supporting, Lewis then proceeded to angrily, snidely READ a large portion of ‘Howl.’ Bob and Ray never came up with anything more hilarious.”

My father’s in Thailand right now work vacationing with his husband, Joe, and chugging along on his newest (fifteenth in total, and sure to be excellent) Donald Strachey mystery novel. Strachey, my father’s hardboiled detective in the series, is, of course, named after Lytton Strachey. Who knows what kinds of heights I’d have scaled by now if my father hadn’t burdened my small and shrinking brain with the cell-consuming knowledge of the intimate details of the Bloomsbury Group? Want to know how many times an employer or customer at the bar has asked me, “Hey. Chief. Who wrote the 1921 biography of Queen Victoria”? I’ll tell you: fewer than five, easy.

Knowing how radio sound effects were made, who Arthur Godfrey was, the ins and outs of the McGovern presidential run in ’72 and what a “nattering nabob of negativism” was never got me anything but correctly beaten up in seventh grade, but by god, at least I was raised a pedant who reads for context.

By the time I was old enough to stop drooling and pay attention to the radio, Bob and Ray were no longer regularly on the air. But my dad had The Classic Bob and Ray on cassette, and we would listen in the car. He would pick me up from YMCA summer camp, or take me on long drives to Lock Haven, Pennsylvania, to see his family,11His mother only had his first, non-gay detective novel on her shelves, and his father once made a Rock Hudson joke that caused my dad to storm off and presumably smoke cigarettes, but, still, they were, in their fashion, good people. Put butter on everything. and my father would laugh uproariously along with a fake film advertisement for Grub: The Story of Food (“Imagine the stark realism of tons of roast beef consumed by 5,000 extras … made by the same studio who gave you Crosstown Bus”). And I, despite lacking even a hint of context to help me understand why anyone might find a mumble-mouthed agriculture reporter amusing, would laugh uproariously because he was laughing uproariously. Listening to a man you yourself find funny laugh at jokes you don’t get is, in retrospect, a master class in learning to read social cues. Thanks to these long car rides with my dad, I have become particularly adept at pretending to understand what is going on around me at nearly all times.

My dad’s response went on:

“The only bad thing about the Mutual show was when the producers added an Ed McMahon-like ‘announcer’ who was often in the background guffawing. Apparently the network wanted to make clear to audiences in places like Lock Haven that this was a comedy show and not one of their regular programs. At Lock Haven High School there was a Bob and Ray cult and I was its (no doubt insufferable) leader. Most people didn’t get the jokes—Bob and Ray weren’t Bob Hope—so this added to our aura of annoying sophistication. One thing a lot of people did seem to enjoy was the soap opera spoof, The Life and Loves of Linda Lovely. Ray always did the female voices, and they all sounded like Great Aunt Beulah with some chicken pot pie lodged in her nasal passage. Ray played Linda and also, I think, Ricky Lewellyn, who had a hard time pronouncing his own name. Bob was Uncle Eugene and Webley Webster. I don’t know what happened to Mutual—actually MBS, the Mutual Broadcasting System. It was an anachronism even then, in the ’50s. Its way-right political gasbags were precursors to Limbaugh, Beck and Levin, though then they were on the air only an hour or so a day, which now seems harmless enough. Bob and Ray of course moved on. One of the funniest things on their NBC-TV show, which ran for a while for fifteen minutes in the early evening, was Ray doing a female voice—Mary Margaret-something—and one of “her” recipes. We saw this early Julia Child only from the neck down, and it didn’t seem to matter that Mary Margaret had thick hairy arms. One of her specialties was something like iceberg-lettuce-gelatin-frozen-ginger-ale salad. My mother did get the jokes, though that salad was something she could easily have served in 1955. RIP, beloved old pal Bob Elliott.”

He would often do this, while cruising through the various economic strata that make up the neighboring towns of Western Massachusetts: start off talking about some minor detail of 1950s model train collecting and wind up on some bizarre cultural artifact that never made movie montages but nonetheless illuminated the era at hand. Dad and me and Bob and Ray: a roving church of footnotes, in a beige Subaru, against the flood of history. Knowing how radio sound effects were made, who Arthur Godfrey was, the ins and outs of the McGovern presidential run in ’72 and what a “nattering nabob of negativism” was never got me anything but correctly beaten up in seventh grade, but by god, at least I was raised a pedant who reads for context.

My dad loves what some might consider detritus, but which I prefer to think of as details. Bob and Ray focused on the mundane and accentuated its prosaic aspects to the point of absurdity. My father instilled in me a love of the day-to-day, the side characters, the fact that good stories and jokes don’t always need to announce themselves. One of my favorite stories of his, which I of course heard in the car, is him asking his mother for an ice cream in 1944, and her telling him, “When the war is over, dear.”

There is no Tuesdays With Morrie profundity to be found in those memories of driving around with my dad, listening to Bob and Ray. Neither my dad nor I nor Bob nor Ray are/were sentimental chumps. I like my dad. I love my dad. I’m confident the feeling is mutual. He’s not a softie, but he’s not a Greatest Generation stoic either; he’s always made it clear that he’s fond of me. But more than the hugs and assorted kindnesses—such as not putting me through the wall when I flunked out of high school—I savor my memories of sitting in the passenger seat, drinking a strawberry Quick while driving through Lanesborough, listening to Bob and Ray low-key their way through satires of things I didn’t quite grasp, and watching my father, checking to see when to laugh. 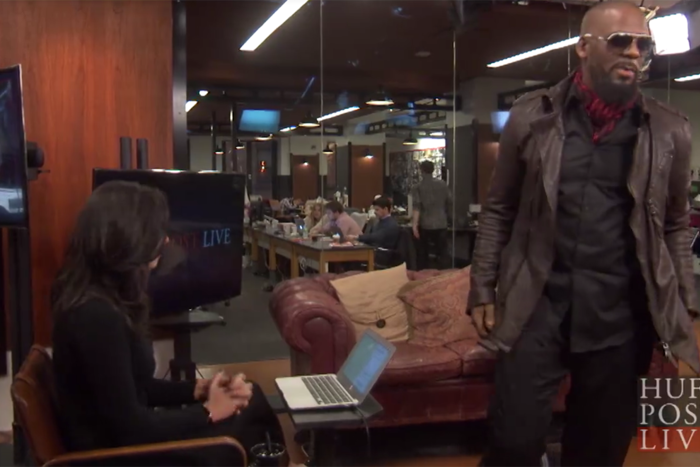 Culture
Getting Away With It
From R. Kelly to Bill Cosby, sexual abuse by public figures is often ignored by fans in order to keep the illusion of… 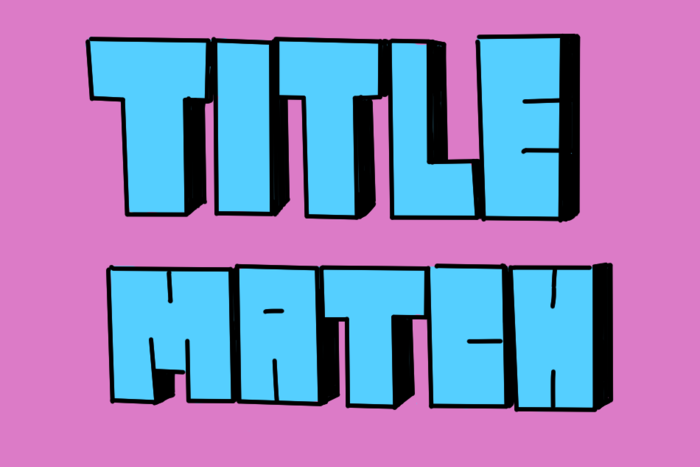 Comics
Title Match
“You thought you had me on the ropes…”