The First Time I Painted a Painting

“ ‘What legacy will I leave behind tonight,’ I thought to myself as I sipped my Rioja and a couple behind me earnestly called each other ‘babe’ every minute or so.” 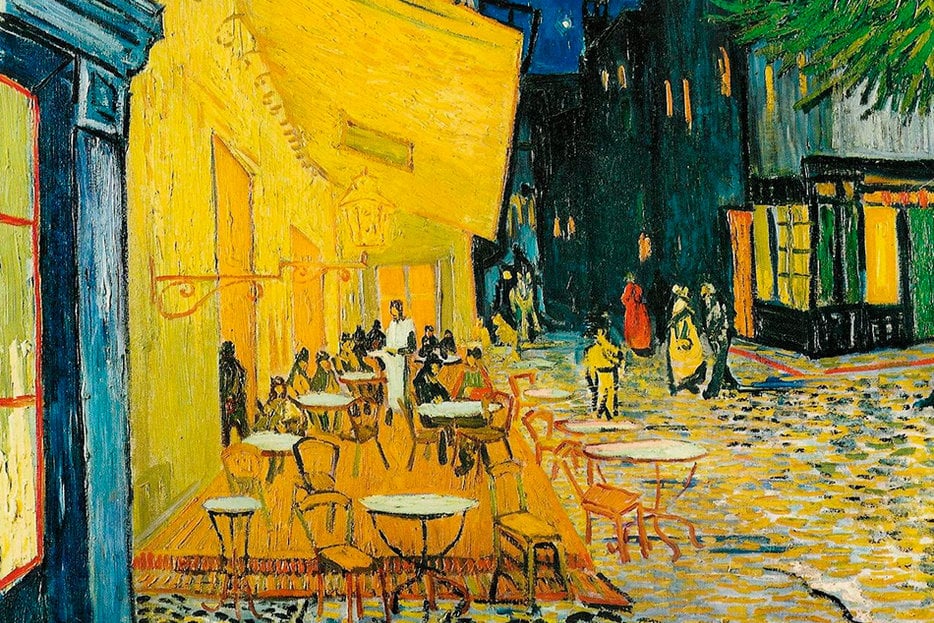 It’s never too late to try something new. From the outrageous to the mundane, Hazlitt Firsts is a collection of people doing things they’ve never done before. First up: Jeremy D. Larson paints a painting.

At this point, I want to sell my painting. From what I’ve gathered, I could feasibly make $35,000 if all the chips fall my way.

I’ll need to forge it, of course. The way these things work is, you have to first figure out a known artist whose work your painting resembles enough that you can hock it as an imitation, or a “pastiche of their oeuvre.” A crass gesture, maybe, but I am familiar with that old handshake of art and money—much more familiar than I am with the actual craft of painting, with which I was a total stranger until I recently took the first and only art class of my life.

At the group painting class slash restaurant promotion slash last-minute bachelorette party idea called Paint Nite, a group of thirtysomethings and I were all there to paint a painting. Leading our artsventure was a young woman with a BFA from Pratt Institute, who patiently helped this group of adults despite our dearth of talent and irreverence for the entire craft, history, and spirit of art. But we all chose to be here because deep down we wanted to prove to ourselves that we could be artists, in the most charitable definition of the word.

On Paint Nite’s website, you can select an experience based on location or the painting you want to paint. Here, I thought, was a silver bullet class: A good painting and a good location. The Cupping Room—a little SoHo restaurant where I was careful not to spill my $11 glass of Rioja on my pallet, and where the smell of mozzarella sticks was distracting—turned out to only be eight blocks away from Basquiat’s apartment, spitting distance away from Chuck Close’s loft, and just west of Rothko’s studio. “What legacy will I leave behind tonight,” I thought to myself as I sipped my Rioja and a couple behind me earnestly called each other “babe” every minute or so.

And the painting we were all there to paint looked nice. My only real qualifier in picking the first work of art I was to attempt was that it didn’t look like a hi-res desktop background from the early ‘00s or Van Gogh’s “Starry Night,” because who, besides some contrarian outsider art critic, wants to look at a colossally inept interpretation of “Starry Night.” Instead, we had some random impressionistic European cafe at night; this would look nice in my apartment while it slowly migrated to the trash over the course of two years. This, of course, was all before I realized I could make thousands of dollars off of it.

Let’s pause here briefly. I do in fact want to try to forge the first painting I ever paint, because, if I know anything about myself, it’s that I am better at convincing someone art is good than being a good artist. But it’s important to get a sense of how bad I am at art across the board. I don’t mean for this to be funny in an ignorant way; I know a lot of people take art very seriously, such as our intrepid BFA Pratt Institute leader who surely didn’t see herself slammed up so quickly against the wall of commerce, babysitting adults for a company whose tagline is “Drink Creatively.” But I understand that we all live in the gyres of late capitalism. I tried to offer her a conciliatory glance when I entered, just as she redeemed my Groupon.

The impressionistic European cafe I’d found so pleasing was, I learned later, based on Van Gogh’s “The Cafe Terrace on the Place du Forum.” I needn’t tell you that this is obviously one of Van Gogh’s more famous paintings, because you are no doubt better at art than I am. This was disheartening to learn on at least two levels: I had came into this project thinking I knew at least something about art, and not only was that proven false, I had been asked to try to paint this fucking thing that Vincent Van Gogh had also painted. We used a remedial cafe scene as a guide, one that also barely resembles the original. 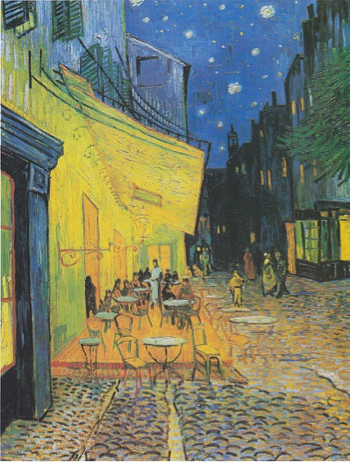 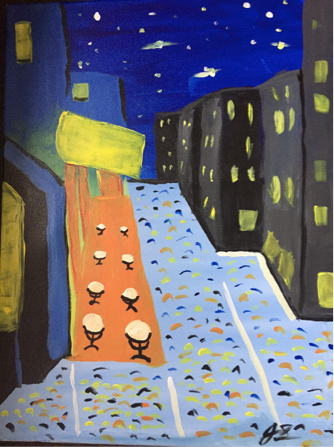 Now, look, the only thing you have to do in life is die. Everything else is a choice. There’s no skill involved in breathing or blinking, but we do have the ability to choose not to breathe or blink. That option is available to us. Death is not optional; the rest is just one conscious decision after another dictated by social strictures and health concerns. Within the great skyline of New York City, people breathe and blink and and choose and die all day long, and until very recently I chose to believe I was a bad artist. It was preternatural to say to someone, “Oh I can’t draw.” But I also felt fine about that, as if it were a bad tattoo you can’t afford to get lasered off.

You stare into a Close and you see the life of a face. You stare into a Rothko and you see doom and apocalypse. You stare into my “Cafe” and you see fear and comedy—a reflection of who I am, this noncommittal squirrel darting about the canvas without risk. My painting beefs it on just about every conceivable level, from technique to tone to color to statement, but I am proud of it, because I did something that I told myself for years I was bad at. No matter its textureless colors, its confounding perspective, its cafe chairs that look like giant whip cream cones or something, it’s a conquered phobia of being bad at art. I’m still bad at art, but at least I have proof. This is why I think I could make some money here.

The most important part of forging a painting, after you decide whom you’re imitating—Van Gogh in this case, obviously—is constructing a narrative about its provenance. If a buyer can’t brag about in whose house this painting hung or from where it was bought, who’s to say someone didn’t just paint it at a boozy group painting class for idiots? There’s more to it, though: Once I forge the proper auction brochures and various invoices, I’ll need to recanvas it on period-appropriate wood, cover up my signature in the bottom right, hope that an amateur buyer would ignore my anachronistic paint, and find a patsy to lie about where the painting has been for hundreds of years. Mind you, all of this is easier than trying to paint a night-lit cobblestone street.

I’ll tell the art dealer it’s an early and very bad Van Gogh. He painted it drunk on wine, when he was but a student of the form, before he found himself, before he got confident, before he really knew anything about famous artists and their famous paintings. It’s kind of funny isn’t it, how bad it is? The price? $48,000. Okay, I can do $35,000. 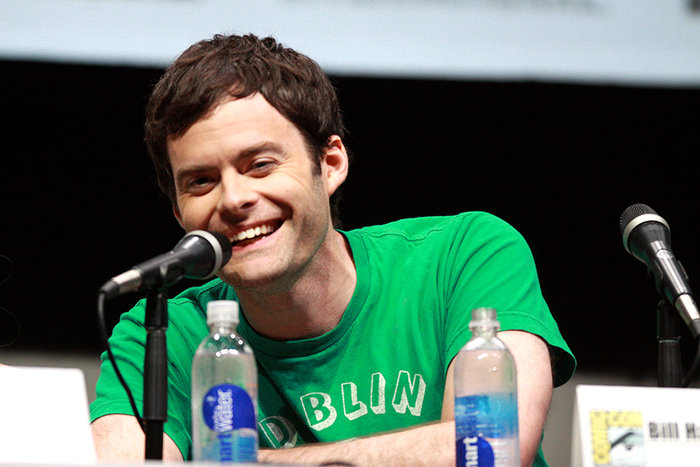 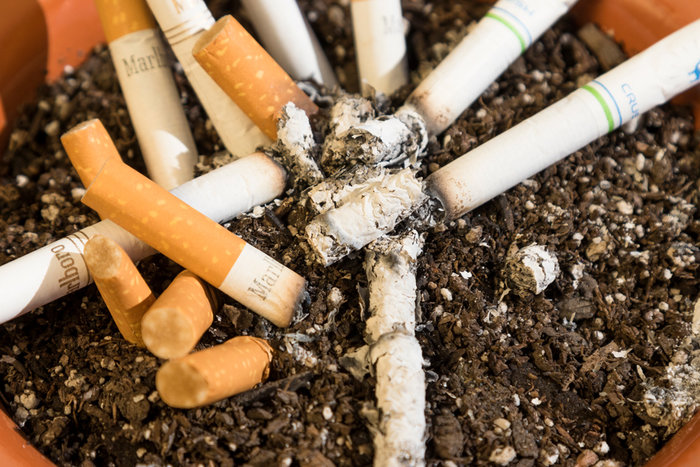 Society
Here’s to Another Year of Being Doomed to Be Ourselves
Say what you will about Sisyphus, but at least he never pretended he was going to start taking advantage of his maximum…