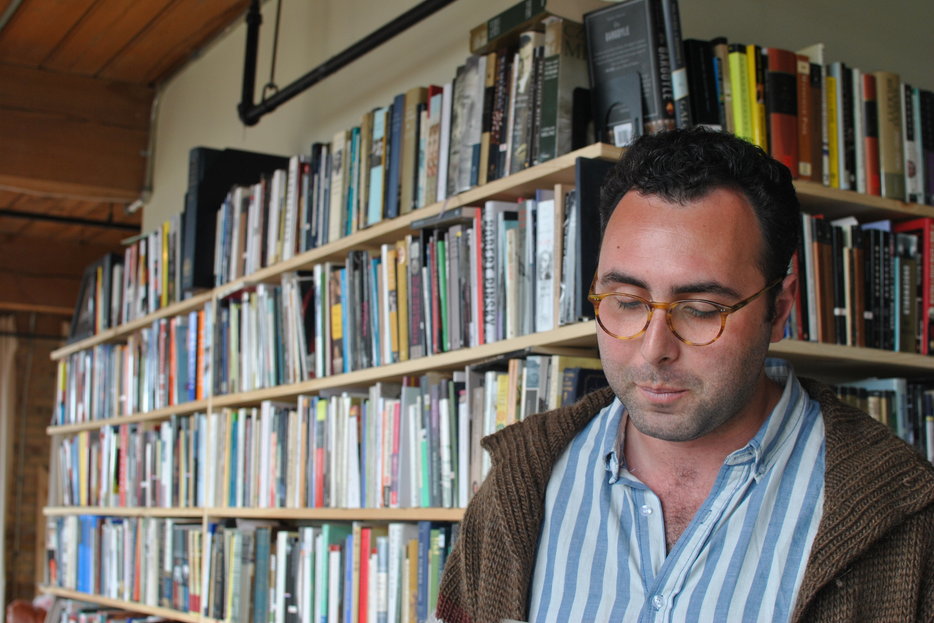 Shelf Esteem is a weekly measure of the books on the shelves of writers, editors, and other word lovers, as told to Emily M. Keeler. This week’s shelf belongs to Michael Lista, who is the poetry editor of the Walrus, a poetry columnist at the National Post, and the author of Bloom, a book of poems about Canadian Manhattan Project physicist Louis Slotin. His shelves are at the literal centre of his home, a loft in Toronto’s Parkdale neighbourhood, where Lista has lived for four months. All sight lines in the space extend toward his enviable library, which was lit beautifully by the afternoon sunlight on the day I visited.

My old place, I was there for three years. I had a bunch of random bookshelves, and the books got out of control. It was sort of like Hoarders-esque. It was really, really bad. Like, everywhere towering fucking stacks. So when I moved in here I got my sister’s boyfriend, who’s a carpenter, to build these shelves. And I got in touch with Carey Toane [a poet and librarian], I knew that she had gone through library studies, and I asked her if she knew anyone who wasn’t working and might be interested in organizing my bookshelves. So she put something on Facebook, and like five minutes later this woman, Elizabeth Ellie McAlpine, got back. 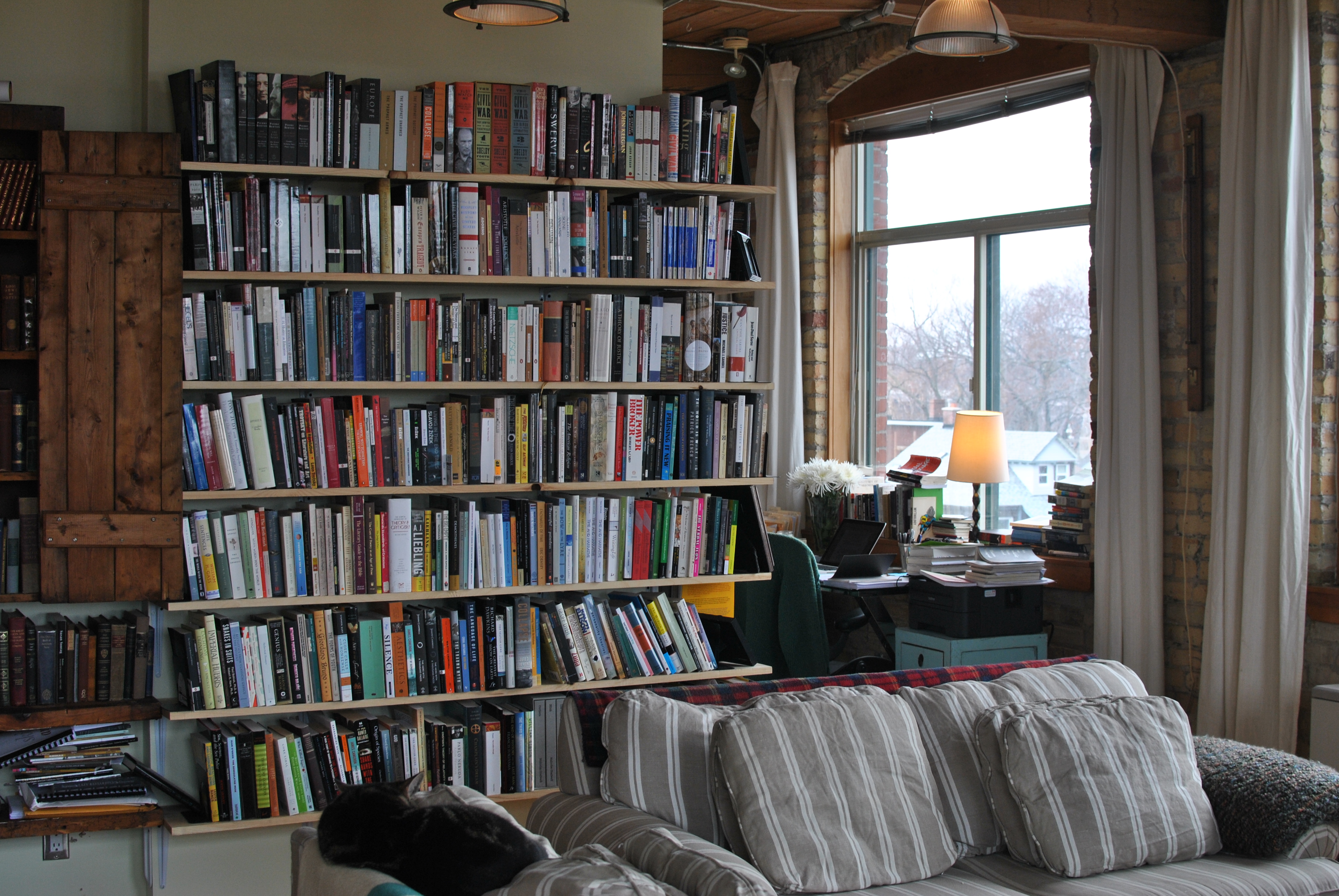 She fucking did this thing! Which I, obviously, could/would never do. She organized the fucking books by section! There’s like, history and philosophy, literary nonfiction, general nonfiction, international poetry, Canadian poetry (the death by a thousand cuts little fucking books), and then fiction on the other side. I stand here some times and I just, like, hug it. It feels so crazy. 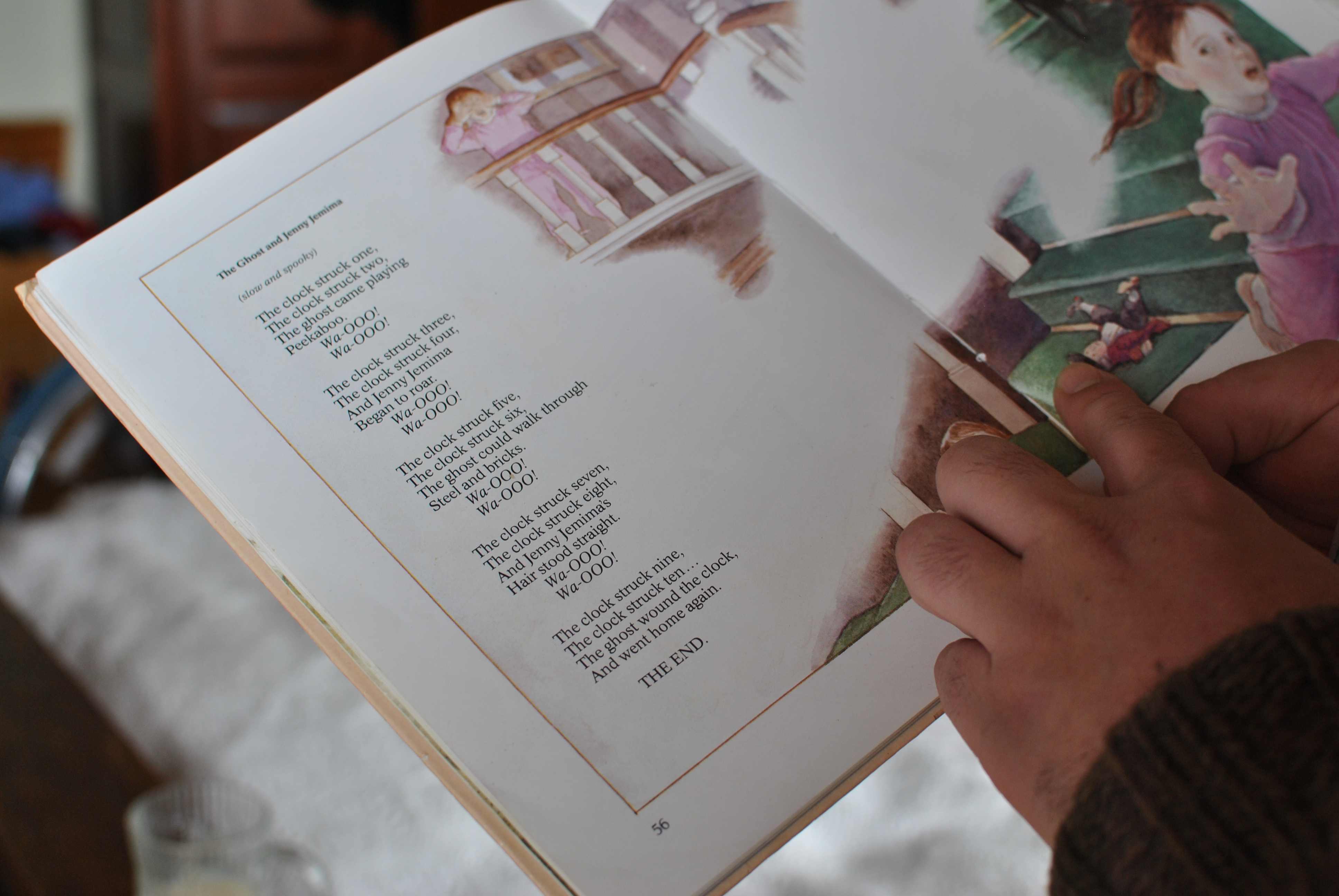 This was my first book. My dad gave it to me, when I was two or three. It’s Dennis Lee, and in my childhood, Dennis Lee was the man who made this magic book, Jelly Belly. My dad, who is a very busy man, the one thing he would do is read this book to me. And these fucking pictures! I remember being in my bed and listening to my dad, he would do this sort of really cheesy dramatic reading of all these things. And just hearing these rhyming little things ring out in my head forever. I think if it hadn’t been for this book I would be a really well adjusted lawyer or something. This thing fucked it all up.

I had no idea that Dennis Lee was the founder of House of Anansi, and a well-respected adult poet. There was something in these that was both reassuringly beautiful and utterly terrifying. Just sinister. It wasn’t that the material was particularly scary, it was something about the rhythm and patterns of language was scary. I think now, the stuff that I’m working on, it really comes more and more out of this book. 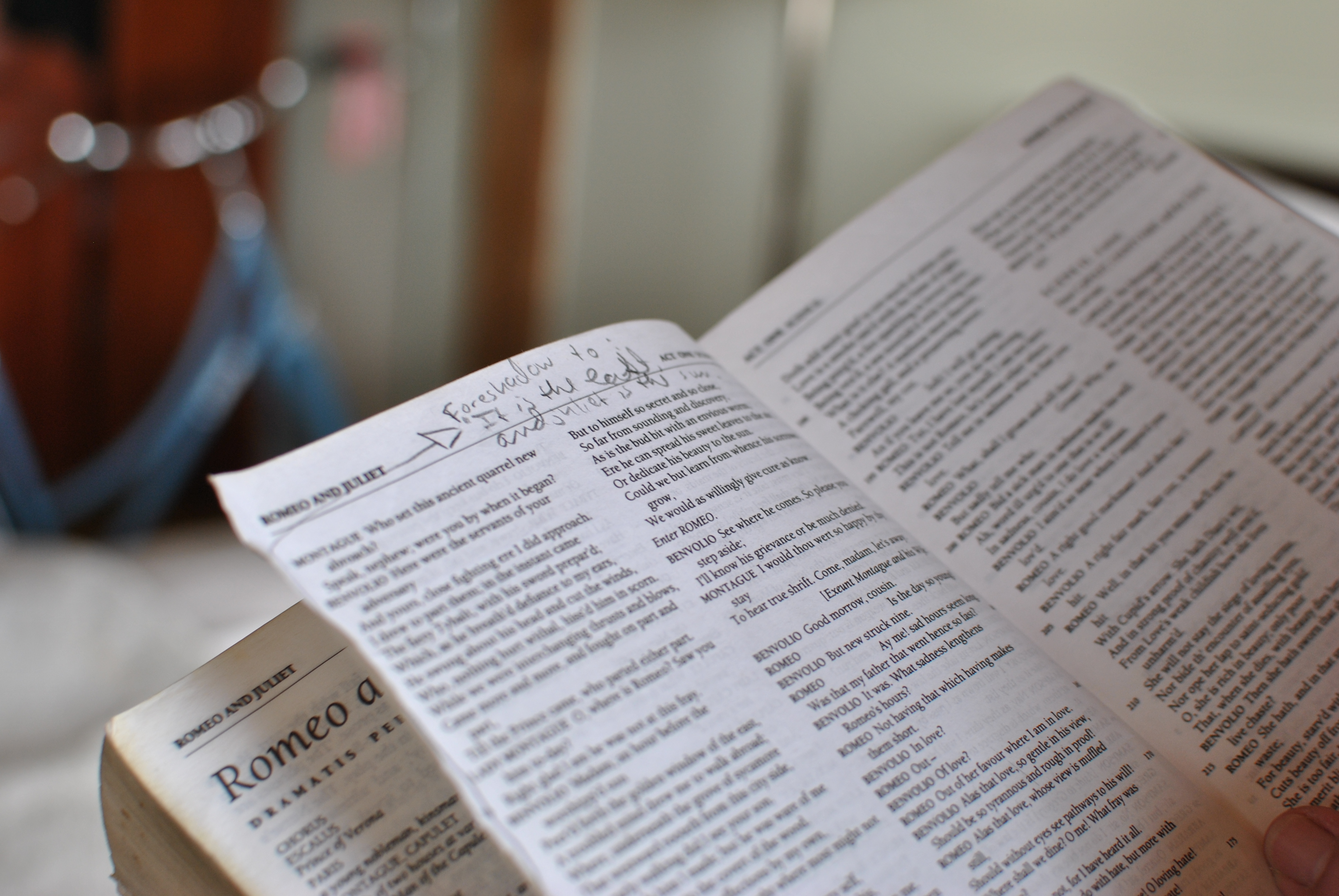 My emo thing—I wasn’t an emo kid but when I was 14 I got really pretentiously into Shakespeare. Mostly because I saw Baz Lurhman’s Romeo + Juliet. I went with my mom to Coles, and we got this. And this is me taking my first weird little steps into literary criticism. Here’s 14-year-old me writing, like, “foreshadowing.” I’m madly underlining and starring shit, and writing “Wow.” Like, what the fuck. It’s Shakespeare! I would carry this around everywhere. I didn’t really know what was going on, but just having it was like a totem. Like, maybe this thing would rub off on me through some sort of weird osmosis. 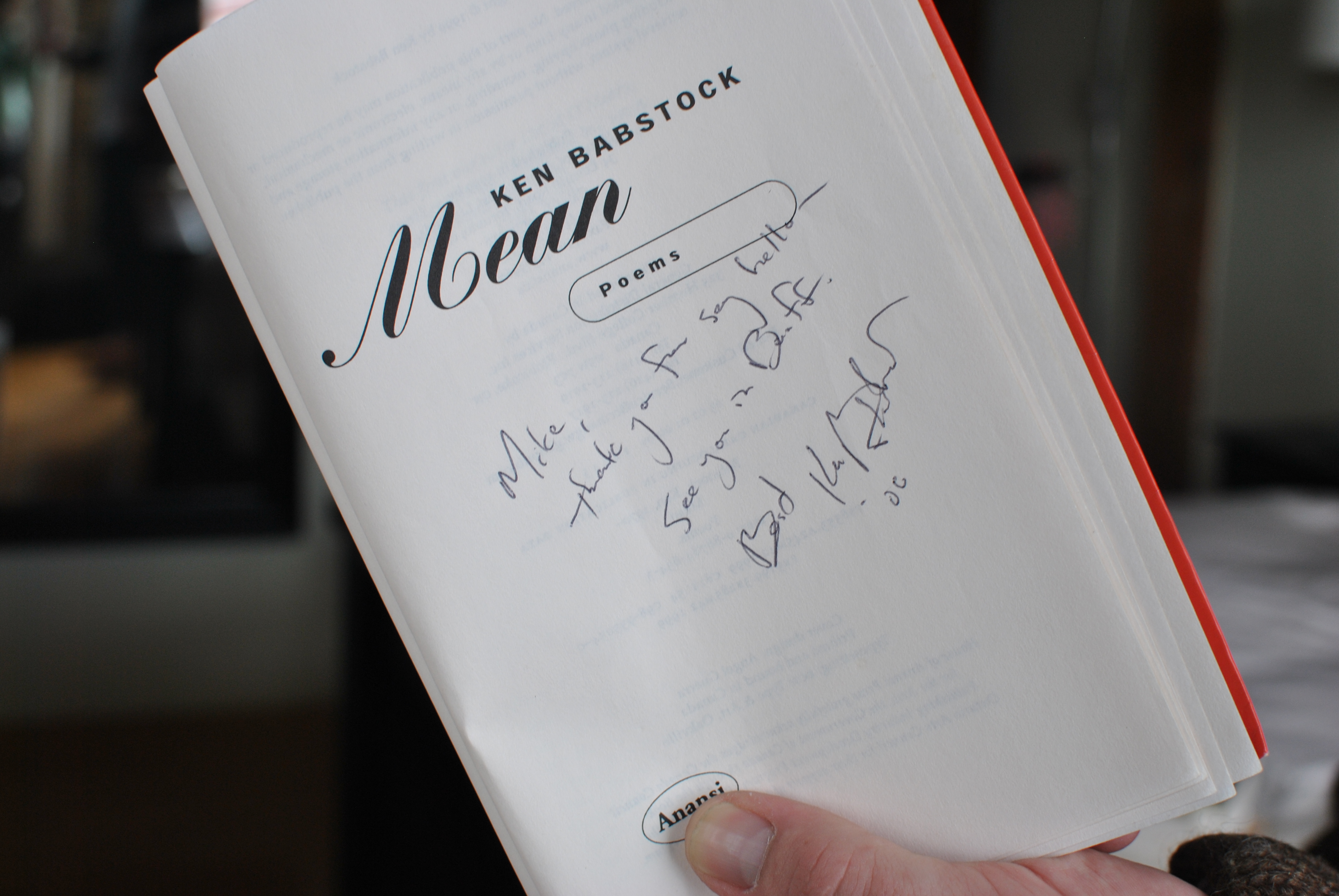 When I first started to think about being a poet, I remember thinking that the whole thing was just sort of depressing. Who were these people? I’d flip through poetry books and be like, I’m not interested in any of this shit. But then there was this guy, Ken Babstock. Reading this book, it made poetry feel alive. I must have read this book a hundred times, and imitated the poems a thousand times. I took my fourth year of university off because I wanted to write this novel. It was dogshit, it was terrible. But I got into a Banff residency and I found out that Babstock was going to be there. In the summer before I went, Ken was at Word on the Street, and I brought my copy of Mean for him to sign. I went up to him, and this was like the first contemporary poet I’d ever really met, and I went up to him with my old copy of his book, and I was like, Hi, Mr. Babstock, I’m Michael Lista, I’m going to be at Banff with you… He was like, oh, okay, great, cool. This was the first interaction I’d ever had with him, and he signed the book, “Mike, Thank you for say hello. See you in Banff. Love, Ken Babstock.” It was weird, because Dennis Lee was this guy that franchised, founded, sponsored my imagination and founded Anansi. Ken at the time was the poetry editor at Anansi, and he would end up being my editor for my first book, which was published by Anansi. I don’t know why I felt like I so needed to be near these guys, these people. Looking back on it feels sort of sad, sort of awkward that I needed to be in that group so badly. 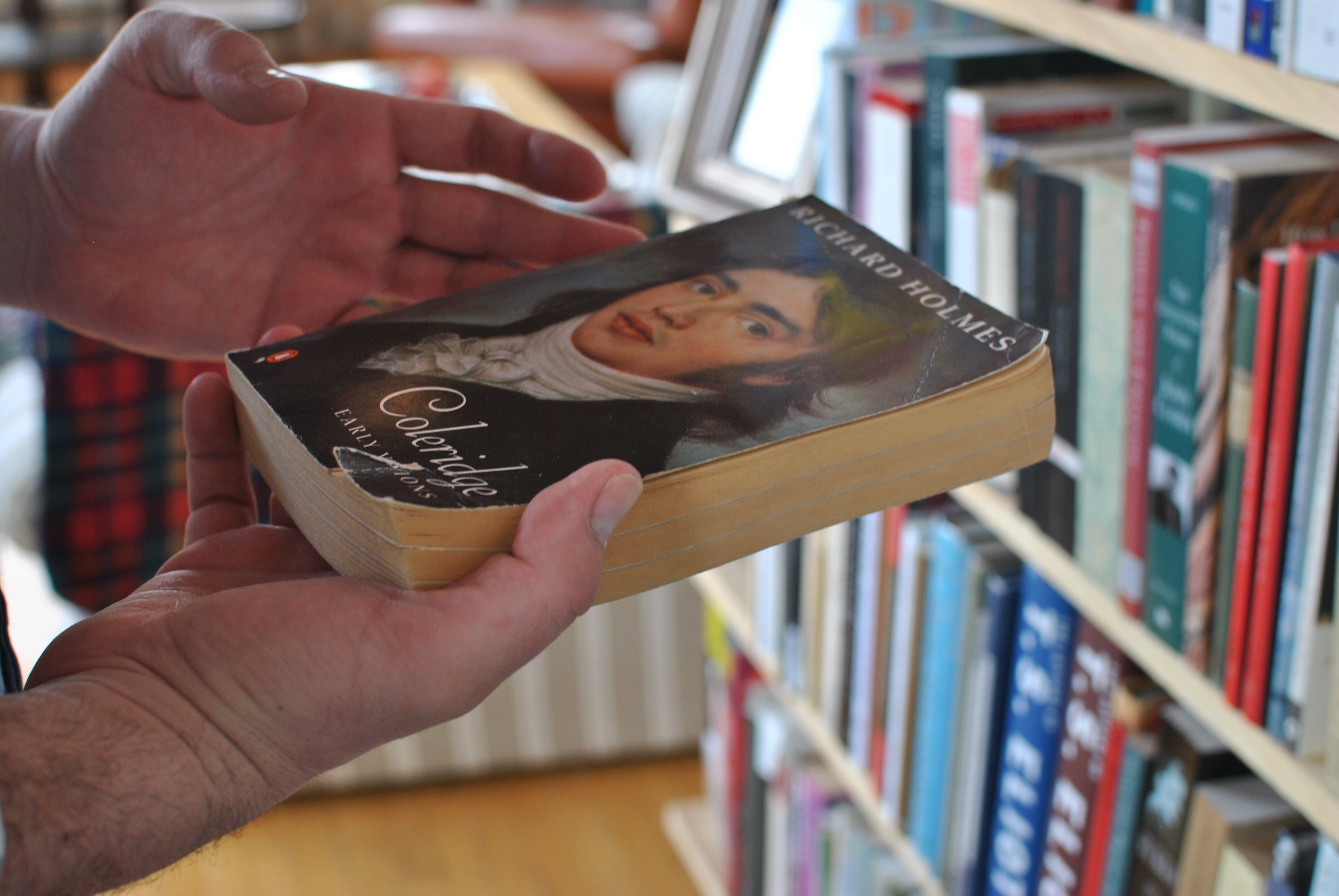 This is a fucking crazy book. This is probably the best literary biography of all times. Richard Holmes. It’s about Coleridge, who was such a bizarre man. He was so brilliant, but you could tell that he felt dwarfed by Wordsworth. You know, Wordsworth was a great poet, but he sort of comes across as a little bit of a flighty dunce. Whereas Coleridge was tortured and brilliant. He would drink laudanum, like, pints of it, and then go and give a lecture on Shakespeare with no notes. There are some transcriptions in here of some of them. The lectures were… I would never be able to come up with something like that if I worked for the rest of my life on one. And he would just down a pint of opium water and just go and nail it. He was incredible. He sort of has a couple of really great poems, but beyond that… his genius was aborted. He sort of fucked it up. He really did booze and opium his genius away. But this is an amazing book.

It’s incredibly sad. Can you imagine that you wrote your best shit when you were so young? I hate that idea so much. You write your best stuff in your 20s or 30s, and then what do you do? I would be sort of embarrassed at having done that, and then nothing that ever comes close again. That’s so horrible. It would be better never to have written at all. I’ve been thinking a lot about Sylvia Plath and I sometimes wonder if she felt like—I mean it’s obviously way too romantic and melodramatic—but I wonder if part of her thinking at the end, clouded as it was with depression, was like, holy fuck, I definitely just wrote a masterpiece, my bullshit husband Ted Hughes is gonna get way more credit for his shit, which is like, way worse than mine. Ariel is just so perfect, it’s a perfect book. I think one of the fears of writing a perfect book is that you’ll never do another one again. I wonder if that went into her… I don’t know that you could call it a decision, but her thinking. 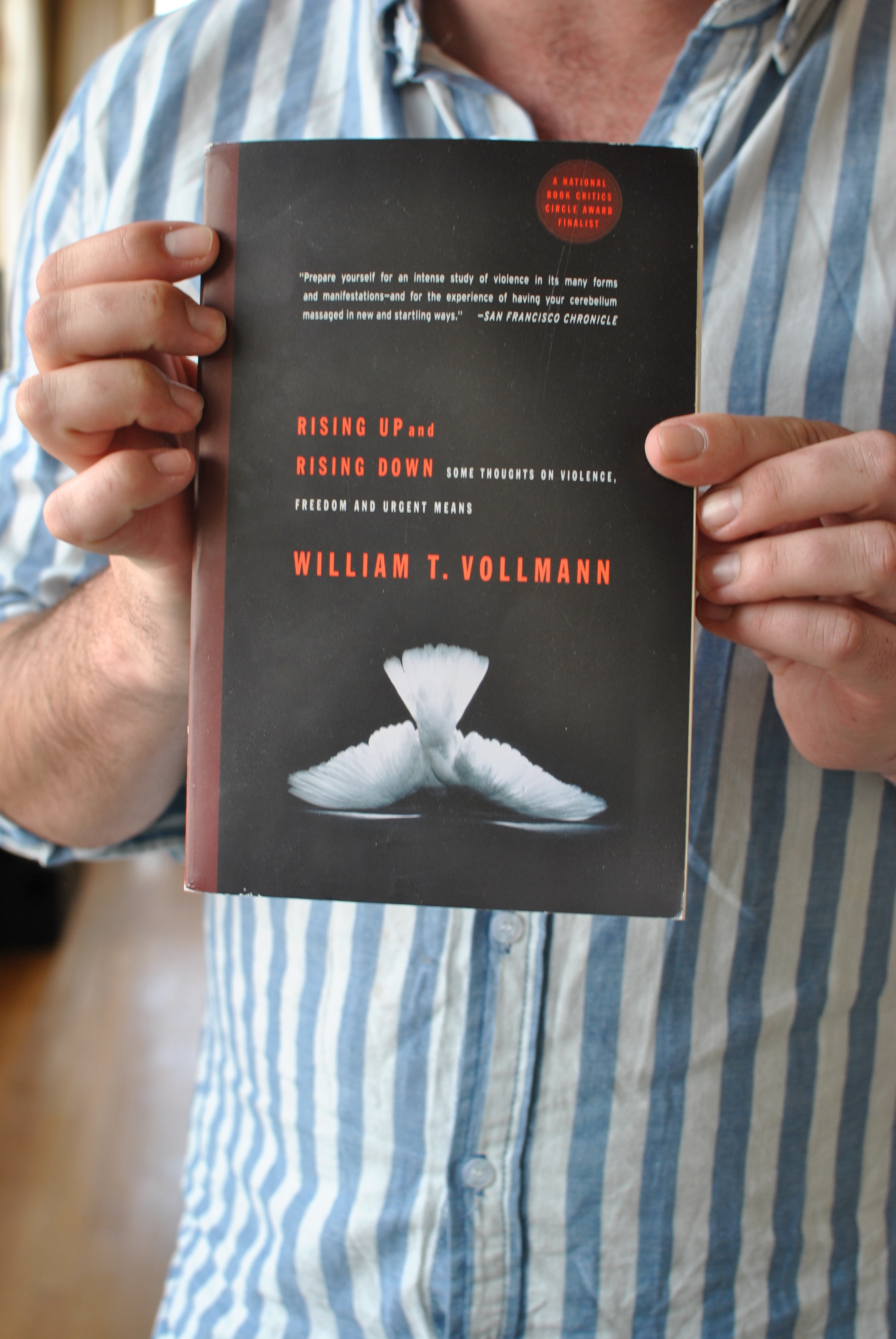 Have you ever heard of this book? Rising up and Rising Down? This is a condensed version. The real one is six volumes, almost 6,000 pages long. It’s about violence. He does, like, ethnographic studies of it in different regions, and then he comes up with this thing, which takes up four fifths of the book, called the moral calculus. He comes up with hypothetical but increasingly obtuse scenarios, like a guy holds you up, and he’s wearing a mask, and he has a gun, but you’re not sure if it’s a real gun or not, are you allowed o use lethal force. He goes through his thinking about every little scenario to try and map out a behavioural compendium for every possible situation where violence might be used. Vollmann is crazy. When he was 18, he’s American, but he went and joined up with the mujahideen, in Afghanistan, partly as a soldier but mostly as an aspiring writer. He comes out with a book like this every year. And he’s also a novelist. I just don’t understand how someone can write that much. He’s probably put out over 20,000 pages of work in the past ten years. It’s crazy. 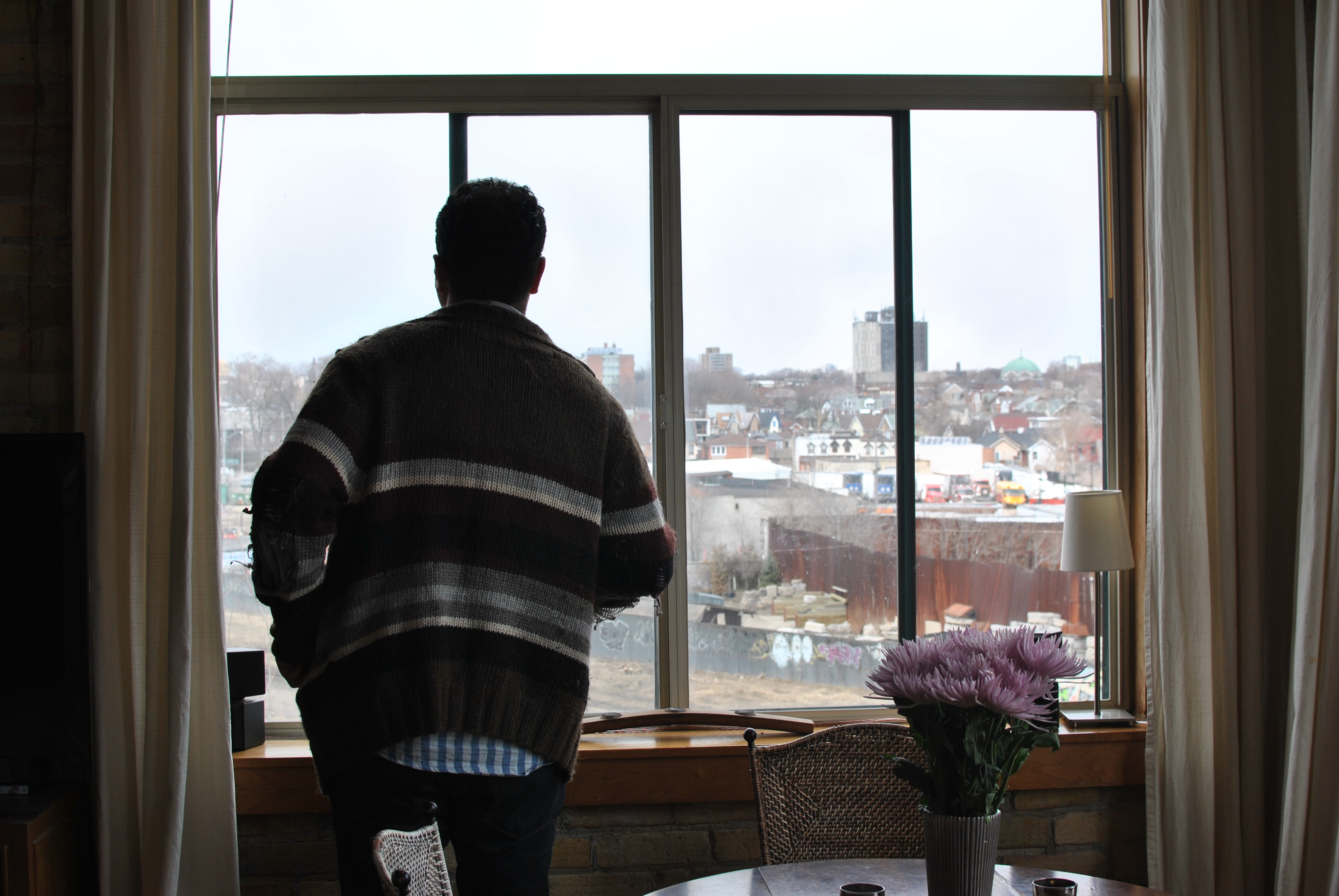 That’s why I’m attracted to poetry. I’m not interested in this—you have such a little chance of having your work be read and understood if you’re producing at that length. A poem, if you do it right, if you can have a poem that not only is a great little vehicle for traveling through time, but it can also do a lot of the same things that this does, just much shorter. And so as you get closer and closer to that ideal, you also limit the chances that you’re ever going to reproduce it, and have the joy that comes from it, ever again. You reach this finite point, where you’re doing exactly what you want to do, but the closer you get to it, the more danger you put your future self in of not being able to do it again. 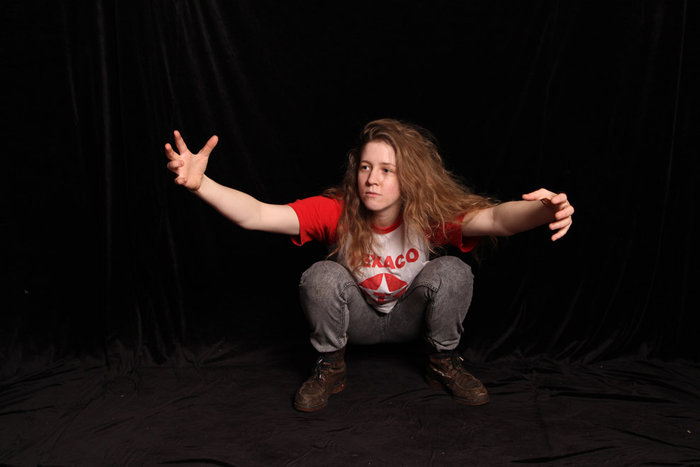 Jukebook
Simone Schmidt on Songwriting as a Vehicle for Hope, Visions, and Despair
A new series in which we talk to artists, musicians, and other creators about the books they were reading or inspired… 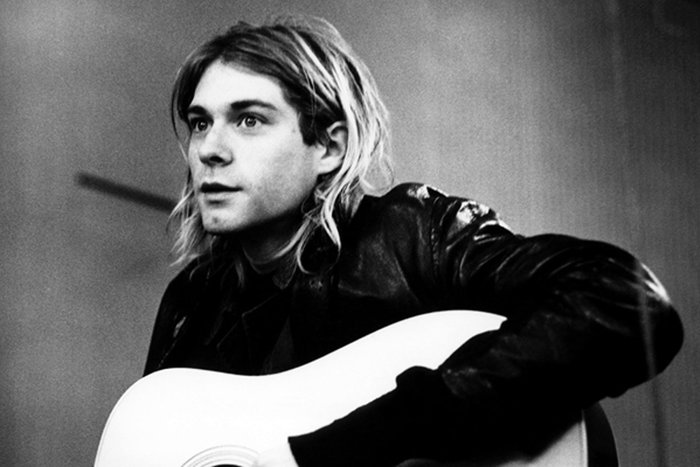