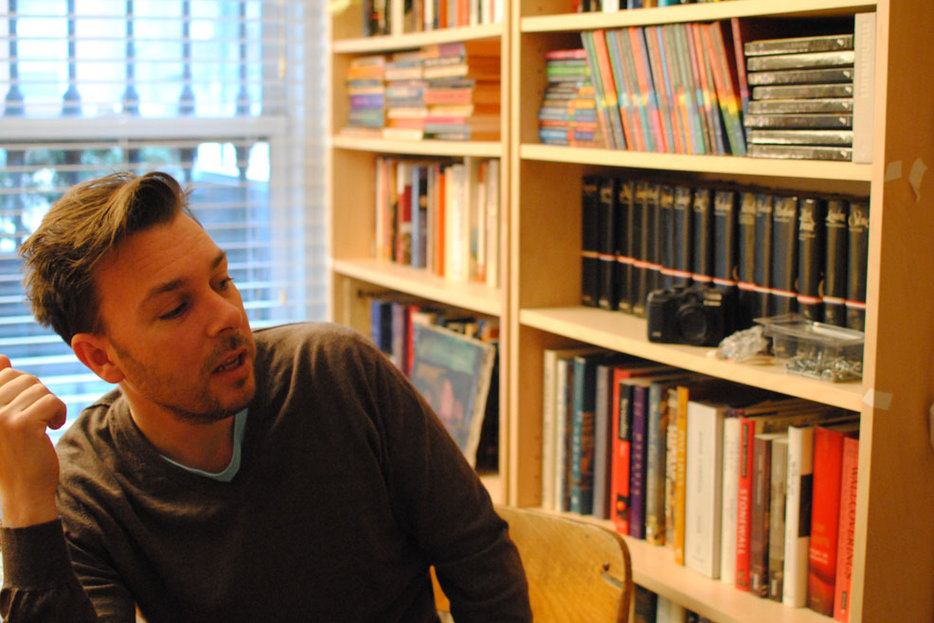 Shelf Esteem is a weekly measure of the books on the shelves of writers, editors, and other word lovers, as told to Emily M. Keeler. This week’s shelf belongs Choire Sicha, founding editor of The Awl, former managing editor of Gawker, and author of the forthcoming book, Very Recent History: An Entirely Factual Account of a Year (c.2009 A.D.) in a Large City. His bookshelves are in his office,which is in his home, which is in Brooklyn. Sicha shares the space with his husband and their two cats. Sicha said that he trained them, the cats, mostly using a book called Train Your Cat in 10 Minutes a Day, which was on a pile of other books just outside his office door, presumably destined for some other place.

So my bookshelves aren’t that interesting. Do you like how it’s a mess in here? I got married a couple years ago, and we had to combine books. It was actually good, because we needed a good cleaning, and we moved three times in two years, or something like that. Or four times? So I got rid of half my books, which is great. But there is that thing where you go through, and you’re like, which ones can I bear to part with?

Which, at this point, the answer is all of them. Don’t you think? If you need a book, you can get it in an instant. Physical books… it’s sort of a waste. Isn’t that a terrible thing to say? And yet, clearly, we have plenty of them. We have a room full.

All the big ones are my husband’s. I hate art books. And then all the weird ones are mine. It’s almost half and half, all told. We had almost no overlap, which is fascinating. You should really look carefully at books when you’re getting married, see if you’re getting good books in the bargain. We just had very different reading experiences. I mean, I’ve never read history. Because I don’t know anything about anything. And he read the classics. He’s smart, intellectual. I’m not, but I read the books of Kurt Vonnegut. So I’m better off. 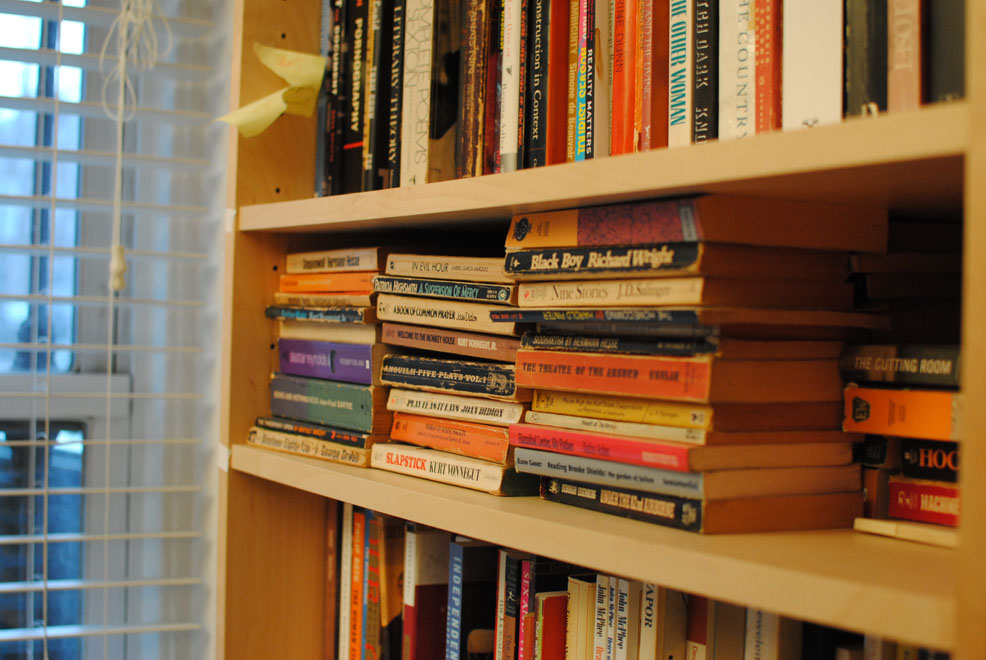 It’s a hot mess in here. Look at how many terrible books there are. Those are the books I should get rid of, all my tattered paperbacks.

I re-read very few things. I re-read Janet Malcolm. And a couple others. But literally, that’s it. I should reread Kurt Vonnegut. I reread Renata Adler too. I pull down Reckless Disregard every once in a while. They’re bringing out two of hers again. [Speedboat and Pitch Dark are both being reissued by NYRB Classics this spring.] It’s so good, because no one’s read Renata Adler’s fiction. And most people should read the nonfiction too, because she’s just so good. She really disappeared, she stopped teaching a few years ago, and she stopped publishing too. It’s interesting to watch Janet Malcolm keep publishing, and Renata sort of receding. Which I think was a great choice. In some ways she was like, Fuuuuuck you. And I get that.

It’s so weird to look at these, like Toward a Radical Middle. Oh my goddddd. No one’s read any of this stuff. Most of it was in the New Yorker. Dedicated to William Shawn. This stuff is just an incredible period piece. 1971. I was four. I said that really quietly, so the tape wouldn’t hear it. But can you imagine a book cover like that now! There’s so much weird, obscure—there’s weird shit in there. A lot of it is protest marches, and that’s interesting. All this criticism from like, 1968! But then, I can get all of that on my phone. There is so much stuff in the archives of these magazines. 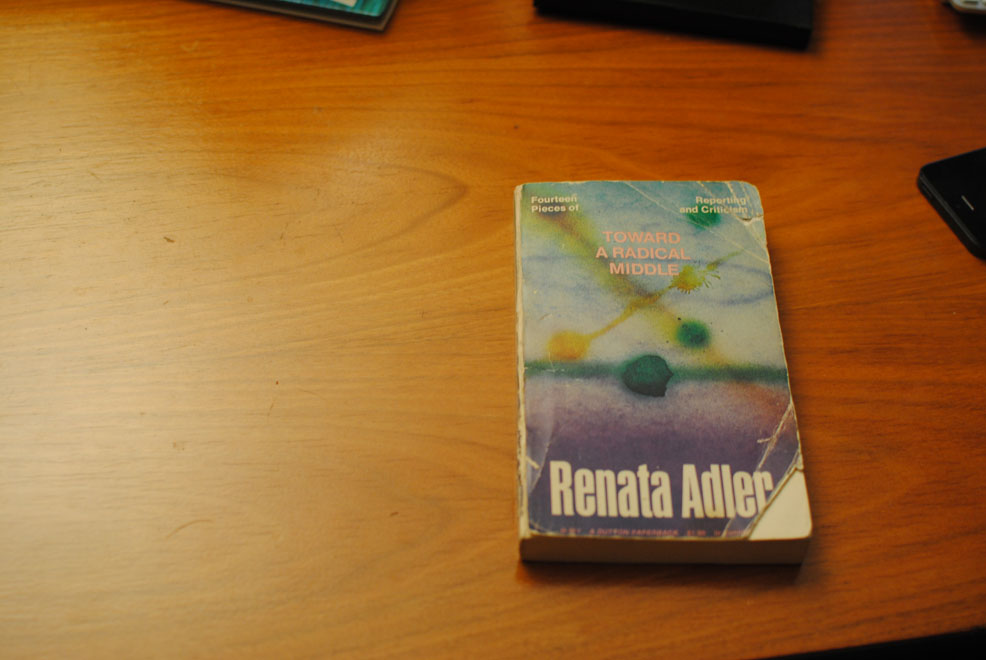 Another thing I couldn’t get rid of when we last moved was all the ‘80s theory. A lot of this stuff wasn’t widely published. What if you needed to get your hands on a copy of whatever crazy thing? Like, the Big Book of Pornography?! Literally, the ‘80s battles in academia over pornography were just a thing that doesn’t exist anymore. If you need a copy of The Speculum and the Other Woman, what are you gonna do? Nothing, I guess.

What if you need a copy of Who Comes After the Subject? I mean, come on! I don’t even know if I read all that. The French really did a number on academia at that point in time, didn’t they? I actually just decided the other day—this is the most pretentious thing anyone’s ever said—but I really decided that I need to learn French. Because, if we’re not gonna read in English anymore… what if I learn French, and it’s really hard, and the French give up on reading too? I’ll have to learn Arabic. I should just skip past the French… that’d be amazing.

Books are weird. But like, if this room was my iPhone, it’d be a whole different kettle of fish. Among the last five books I’ve read are [one by] Ted Chiang, The Year’s Best Science Fiction, Susanna Clarke’s Jonathan Strange—because I wanna read it before it’s a movie, it’s actually really good. It’s long, it’s really long, and it’s weird. She does some things—she’s managing a big cast and it’s interesting to watch her do that. 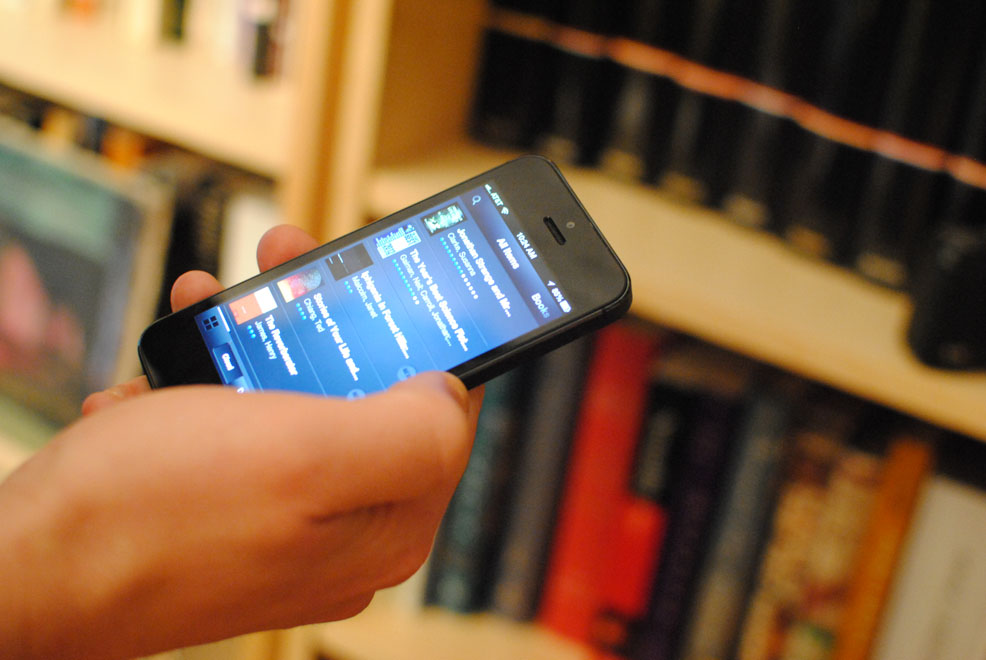 Fortunately, no one ever sees this room. So they never see that I’m the last person with the collected works of Andrea Dworkin. Who is actually very good. Very very good. Y’know what? She wrote like nobody else. She was the real deal.

God, there really is a lot of Dworkin. You look on every shelf and there’s a little bit of Dworkin hidden somewhere. Oh, look. The New Woman’s Heartbreak. Never forget! This one is so so so good. And also, would anyone ever publish such a tiny tiny book like this anymore? It’s a chapbook, basically. I mean, wow. Yeah, no, no one would. That’s from when she was trying to be Grace Paley, sort of. Or something like that. Though that’s not fair. Is that fair? No.

And then there’s just like, weird shit like this. Hypatia was the journal of feminist philosophy, founded in the early ‘70s, and my mom was one of the founding members. So I keep all of these. If I find an old Hypatia, I keep it, because that did not exactly have a big print run. So I’m always like, oh that’s an amazing personal—I mean, it’s not nostalgia, exactly. But it’s something. 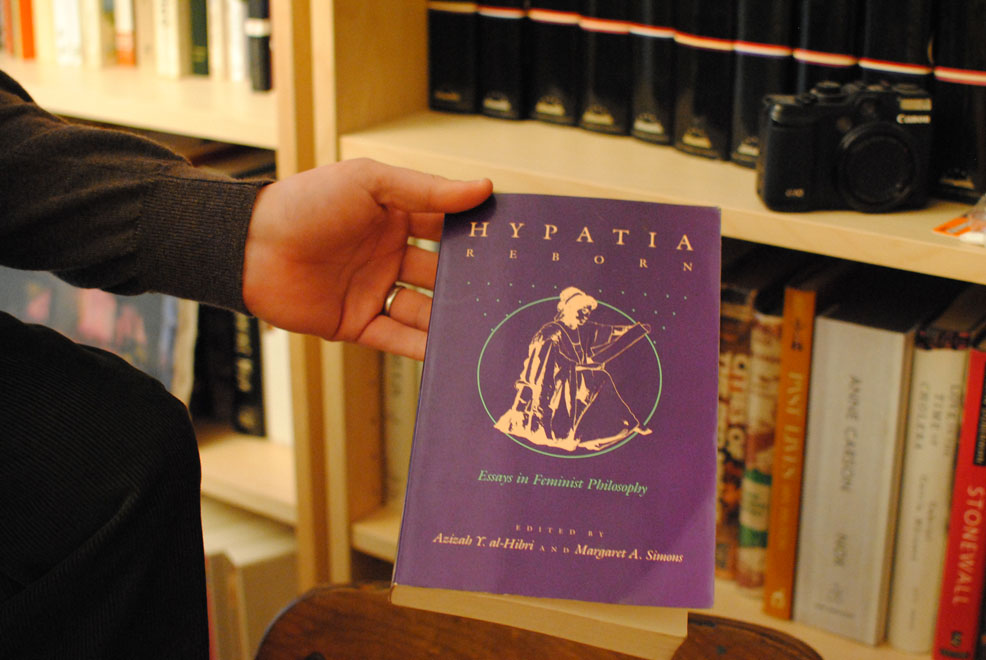 Maybe I should put all the books in order someday. From favourite to least favourite, people sort their books in such weird ways, I’m sure you see this all the time. I worry about people who sort their books in weird ways. I would like to separate out the history, the nonfiction, and the fiction. That would actually be useful. When you don’t move, you know where things are based on touch, and colour and what not. And then when you move a bunch, like, the boxes sort of stay together, which is good. But you lose context. Like, I don’t know where to find a bunch of things. All the Joy Williamses are on different shelves. I want all the Joy Williams together. 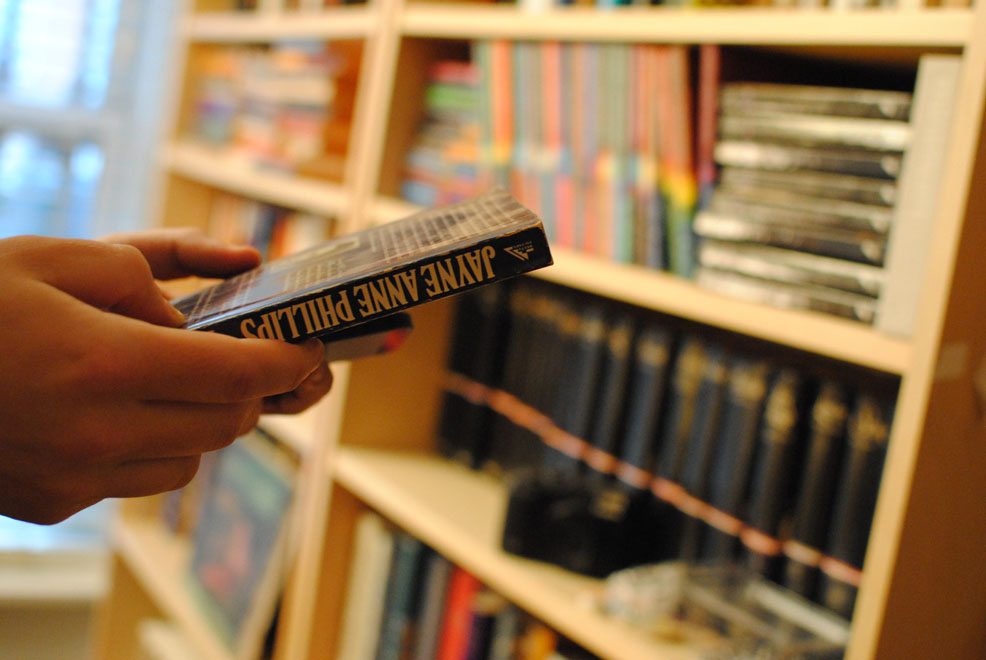 And then Jayne Anne Phillips, God bless. She was the shit. She was like the bad girl we all wanted to be. I think she’s still working. She’s only 52. I feel old. Super good. This is the short stories. What year is this? This was sort of like, the era when—1970, is that true? That’s weird. Time doesn’t make any sense. But she was like the shit for short fiction. I suppose she still is.

You know who’s really good? Beth Nugent, too. She was like the next Jayne Anne Phillips, totally the shit too. Everyone was like, oh, she’s who I wanna be. She still is. I don’t mean that in the like—you know what I mean. 1988. Wow, that’s crazy. Those are all really good books that I’m not sure people still read.

Oh here’s Adler’s Pitch Dark. It’s super good, right?! She’s the coolest. She’s so cool. Did you read the Canaries in the Coalmine collection? You have to! That’s like the most aggressive book, after the New Yorker book. She just tears a bunch of people new assholes. It’s just insane, in this, like, completely beyond way. She’s so much meaner than Joan Didion at Joan Didion’s meanest. She literally is like, evil. In a way that people just don’t do anymore. That doesn’t happen. People don’t really go to town on people at length, after an extended period of thinking about it. Now when we go off on people it’s really brief, like in passing. I mean, I’m guilty of that.

And that was the New York Review of Books wheelhouse, right? Literally you could be like, I’m gonna spend two months working on a piece that is gonna destroy Bob Woodward, or whoever. Which was great. Although, I guess the destruction wasn’t… I mean, he still publishes. So, in the end, what does criticism really do? 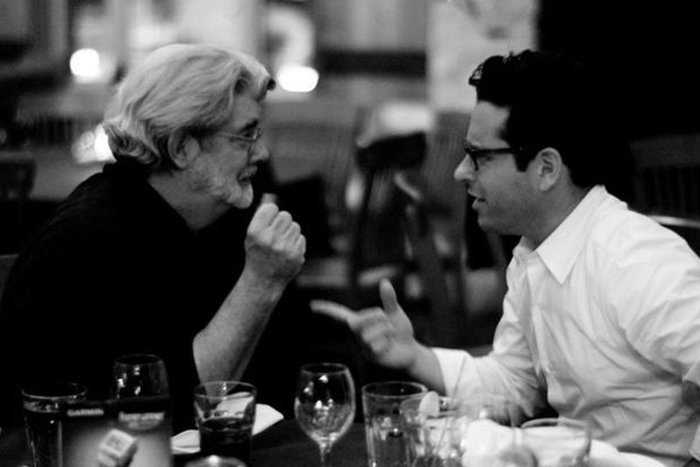 Culture War
J.J. Abrams’s Career vs. My Saturday Night in My Apartment 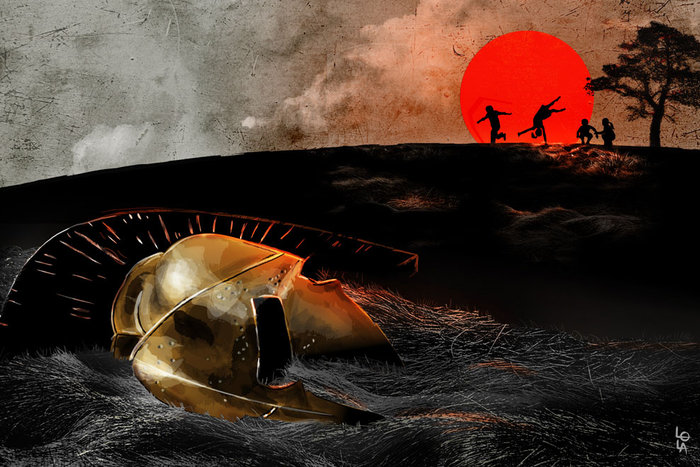 Tabloid Fiction
The Loveliest Phalanx
This is our fifth installment of Tabloid Fiction, in which an author chooses from the trashiest, most lurid, or just…