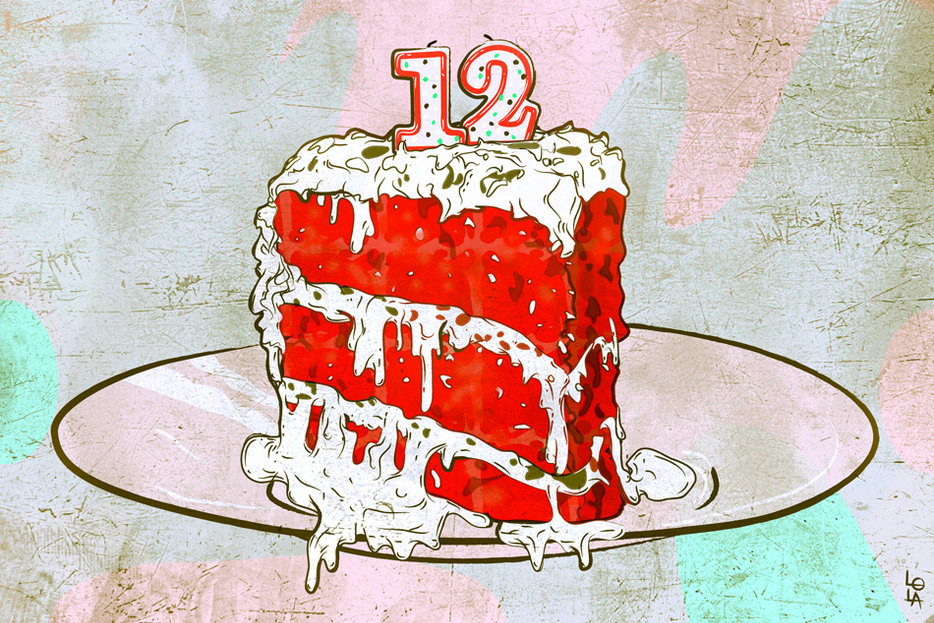 “Two 12-year-old girls inspired by Internet horror stories are accused of luring a girl of the same age into a wooded area near Milwaukee before stabbing the victim 19 times…” From CNN, 2 June 2014.

“Just days after two girls attempted murder as a sacrifice to ‘Slender Man,’ an Internet-created horror meme they thought was real, another girl with the same obsession has allegedly stabbed her own mother.” From The Daily Dot, 9 June 2014.

Jim Whyte stands on the curb outside 12 White Street. Whyte on White—that has to be good luck, right? His back to the house, Jim takes a long drag off his cigarette and checks his notebook.

He can still hear the anxious NoThankYou when he showed up yesterday. First rule of door-to-door: Nay-sayers are sitting ducks. The ones who let you in without a fight, they’ve got the confidence to toss your ass back out. Jim found her name on a phone bill in her mailbox. Sheila, he said, you seem like a lady who cares about kids. NoThankYou. Wait now, if you’re willing to pre-order three cases of Lean Delight Meal Replacement, NeedyKids will donate a whopping 50 percent of the proceeds! NoThankYou. I’m sincere, Sheila, and if I weren’t 100 percent sincere, I wouldn’t be standing in front of you. That got her. She paused. That stuff any good for kids? Absolutely—protein, vitamins, minerals and low sugar, so they’ll stay lean and keen! Lean and keen? Sheila gazed down the length of his legs. I’ve got to pick my daughter up. Come back tomorrow.

Jim checks his jacket now for an ID badge. He pulls out a plasticized, Jim Whyte, Save Our Veterans Fund. Shit. Cramming it back, he roots in his pants pocket. Jim Whyte, NeedyKids Children’s Charity. He scratches off a bit of food and clips it to his lapel.

One last drag off his smoke, he drops the butt in the storm drain. Taking out a packet of breath fresheners, he slips a strip on his tongue and sucks away that coffin nail stink.

Jim thumbs the doorbell. Quiet inside. He cups a hand by his temple and peers through the stained glass next to the entrance. At the end of the hall, he can just make out a twiggy figure in the kitchen, flopping and hopping, elbows poking, hair flying. Must be the daughter. What in hell is she doing? He hits the bell again. The kid stops her antics and stares into the hall. Stock still. Probably not supposed to open the door for strangers.

The kid stares some more and then trots toward him.

He sidles back onto the welcome mat and smoothes his tie.

From the other side of the door he hears, “Who’s there?”

A moment later the door opens. A young girl looks out at him with oversized round eyes behind a pair of oversized round glasses. Her pink t-shirt reads Honey Boo Boo for President. The girl purses her near lipless mouth and blinks. From down the hall Jim can hear a tinny radio blaring.

He grins wide. “Hi there! You must be Sheila’s daughter.”

The child’s neck and head jut toward him as if she’s not sure what she’s looking at. The sun at Jim’s back shrinks her pupils and Jim is suddenly reminded of one of those night creatures only found in Madagascar or Borneo.

She considers him a moment. “You’re skinny.”

“Ha! That’s me, Slim Jim!” He gives a big toothy laugh. He pauses. This kid’s looking at him like he’s an ice cream cone in July. “Your mother’s expecting me. She here?”

The girl sucks her bottom lip behind her overbite a moment and then throws the door wide, turns and walks to the bottom of the stairs. “Somebody’s here!” she shouts in a voice louder than Jim would have thought her capable.

The sun at Jim’s back shrinks her pupils and Jim is suddenly reminded of one of those night creatures only found in Madagascar or Borneo.

Jim hears movement upstairs. Come on down, Sheila. Come to papa. No one can say no to Slim Jim once he gets a foot in the door.

He follows the girl to the kitchen.

Radio music grows louder as he trails, grating his eardrums with techno-percussion and Baby-baby-baby. As Sheila’s daughter gets to the middle of the kitchen floor, she turns to him, and begins to sing, her bug eyes blinking. Jim gives her a wink and joins her in a couple Baby-baby-babies. His gaze drifts down the hall and he says, “Your mom—”

The kid puts a finger to her lips and continues her warble.

Jim’s not sure if she’s aping Justin Bieber or telling him to dummy up. She holds an imaginary microphone and shimmies her shoulders.

Jim eyes her flat chest, her scrawny rump. Like a piece of twine raring to be a feather boa.

He reaches for the radio on the counter. “Would you mind if I—”

“No!” The girl snatches the radio and turns the dial. Not quite on-station now, a rasping hiss delivers the midday news. Her eyes widen. She frowns as the announcer says, “The victim is resting comfortably in hospital and is expected to make a full recovery. Suspects allegedly planned the attack to gain favor with a fictitious character known as—”

“Slenderman!” the girl shouts and flings her hand high in triumph.

“Hey Sweetheart,” Jim tries. “How bout you make sure your mother knows I’m—”

“Already told her.” The girl hunches over the radio and dials it back to Baby-baby-baby. She sets it on the counter and positions it just so. “I bet she’s glad you’re here.”

Jim’s heart clatters like a cash register. “She must have liked that sample I left, huh? It’s good stuff.”

This kid’s too much. Jim grips the radio and lowers the volume. “Just for a few minutes, okay, Sweetheart? Slim Jim’s got a little headache.”

Movement upstairs again. Thumping. Jim looks at the ceiling. He sets his bag on the table and picks a bit of lint off his lapel. “How’d you like to run up and make sure Mom knows that Jim’s here. Jim Whyte from NeedyKids.”

“Maybe you could remind her that half the money from sales of Lean Delight is going to needy kids. Kids just like you.”

Jim eyes her flat chest, her scrawny rump. Like a piece of twine raring to be a feather boa.

What is it with this kid? He gives Sheila’s daughter another once over. Who knows—maybe in a couple years, when she’s got a little mileage on her… “How old are you, Sweetheart?”

“I turned 12 today.” She strikes an I’m-a-Little-Teapot pose.

Twelve? Jesus Christ. “No kidding,” he says. “Well, happy birthday!” He unzips his bag, takes out a leather binder and opens it to the first blank order sheet.

The girl turns a sulky face to the ceiling. “She’s taking forever.” She looks at the envelope of Lean Delight poking out of Jim’s bag. “Do you drink that stuff?”

“Ah, no. No, I do not. I always thought it’d be nice to have a little girl like you.” He sets his binder on the table and notices a coil-bound notebook lying open on the other side. The number 12 is scrawled in various shapes and sizes. In the centre of the page is a blank-faced stick figure. “You gonna have a party?” he asks. “Special birthday dinner?”

The girl’s gaze drifts to the notebook too. “My friend, Anne, was supposed to sleep over, but then she was acting so stuck up. Anne started wearing a padded bra. Totally fake. Anyway, whatever. I’m 12, Anne’s 12. I live at number 12. And then you showed up at 12 o’clock!”

Jim looks at his watch. More thumping upstairs. Sounds like Sheila’s cleaning the tub. He raps his binder with the tip of his pen.

The girl peers into Jim’s face. “You probably live in a big house, right?”

“Hey,” Jim says. “Why don’t you go get your mom’s credit card and then we can get started.”

She sucks air off her front teeth. “I thought because of the twelves, and you ringing the doorbell at twelve, that you were coming for me. Because of my birthday.”

Jim shoves a smile across clenched teeth. “I bet your mom’s got something special planned.” He walks out of the kitchen. At the bottom of the stairwell he shouts, “Hello? Sheila? Jim Whyte here. Jim Whyte from NeedyKids.”

Jim turns and sees the girl, fingers plucking the chest of her t-shirt into little cones. She lets go and wraps her pale arms over her head.

Jim checks his watch again. “I got an appointment with your mother. I don’t have time to fool around.”

“Well, guess what!” The girl jabs a finger at Jim. “I don’t want to fool around with you either.”

Jim squints at her. He looks upstairs. “Sheila?” He takes a few steps. “Everything all right up there?”

The girl stomps up behind him. Her voice breaks a little when she says, “Fine, go see Sheila then.”

Jim climbs to the top of the stairs. “Hello?” He looks one way and the other.

He heads toward the noise.

The bathroom. The white doorframe is smeared with something: Paint? Food? He walks to the door, takes in the floor tile, the florid blooms by the side of the tub.

Another thump. A stifled cry. Jim’s breath rips at his throat.

A quick glance over his shoulder and he creeps into the room.

From the bathtub comes wet slushy breath. Jim stares at the shower curtain. He lifts it from the tub.

Pale and thin, she is curled into a fetal hunch. A stuffed Pooh Bear crammed into a 12-year-old mouth, her hands and feet are bound with a pink plastic skipping rope. Her small blonde head is matted with viscous dark sludge. Tap water drips on her shoulder. The drain gargles quietly.

The girl’s lids snap open. Her eyes shoot toward him.

Jim staggers back, grabs hold of the sink. Moving to the door for air, he drops forward, grips his knees, and closes his eyes. “Jesus Christ. What did you…”

“Told you,” Sheila’s daughter says. “Padded bra.” She leans against the hall wall.

As Jim raises his head, pain roars through his skull like a locomotive. The world turns to pitch and he slumps to the floor. A hammer drops to the hardwood next to him.

A woman’s blood-spattered bare foot lands beside Jim’s head. She slides a big toe across his forehead, and nudges his temple.

Sheila’s daughter yanks her pink t-shirt and moans at the crumpled salesman. “What’d you do that for?” 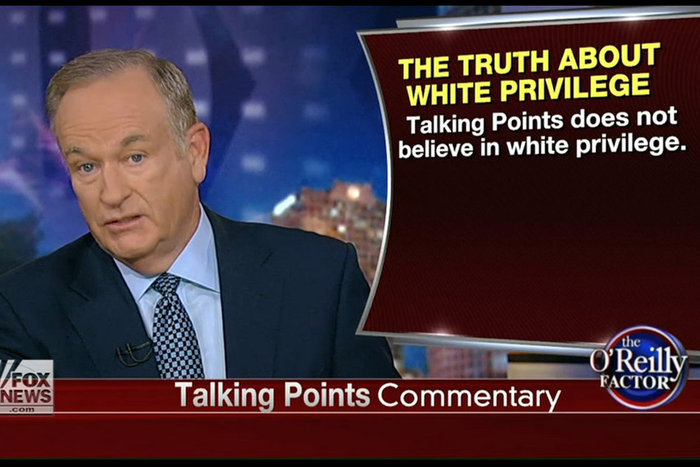 Studies Show
White People’s Obsession with Reverse Racism
Why do so many white Americans think they’re the real victims? 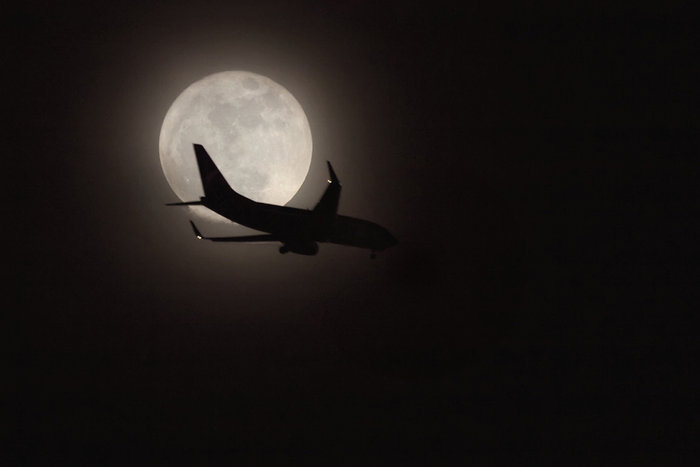 Essay
Two Vessels
The rides of your life.