The third wave of B-movies—straight-to-streaming films made cheaper, faster, dirtier than ever—exist to pad streaming and on-demand services’ libraries.

Omar Mouallem has written for The Guardian, Wired and The Walrus. He served... 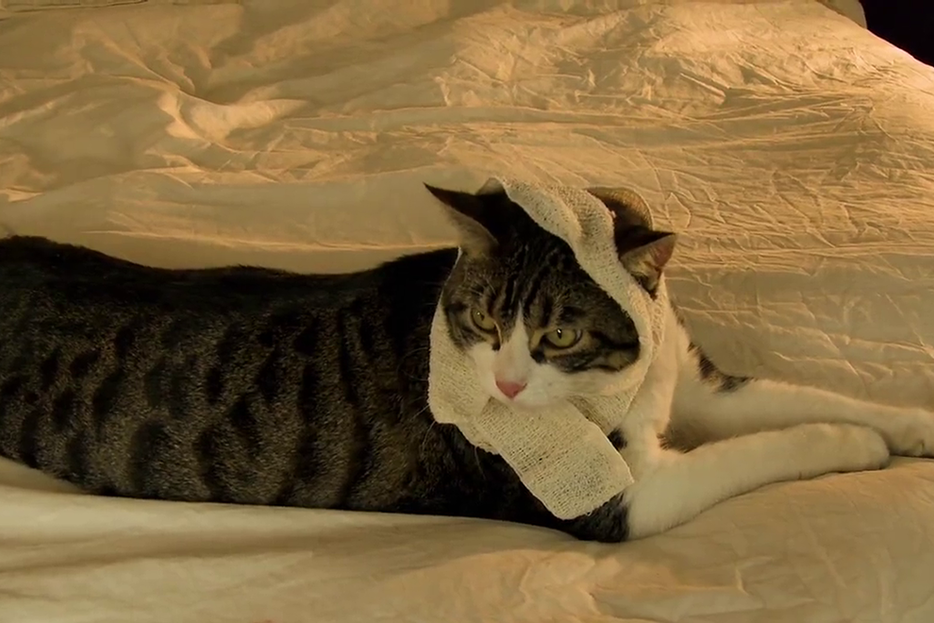 Still image from A TALKING CAT.

What would you do if a loved one told you in a fit of terror that a stray cat literally spoke to them—opened its mouth and uttered words? Would you rush them to a hospital? If you are Susan, the oblivious mother played by Kristine DeBell in A Talking Cat?!?, a 2013 straight-to-streaming kids flick, your panic-stricken teenager’s pleas wouldn’t register because you’re busy making kissy faces at the supposedly supernatural animal. The scene runs three minutes, with all the lags and pauses of a dress rehearsal. Watching the movie, dominated by montages and mindbogglingly long establishing shots, feels as if you’re constantly being put on hold. Yet, you can’t turn away.

Between 2011 and 2014, the Canadian-American filmmaker averaged a new movie every seven weeks. Why A Talking Cat!?! emerged as the most popular in his 30-year-old, 123-movie catalogue is as puzzling as the cat’s magic powers. It’s spawned a Tumblr, a 3,000-word A.V. Club essay, and an 87-episode podcast (one for each minute of the movie) called A Talking Cast?!?. When I spoke to Decoteau in January 2015, a midwestern community theatre group wanted to make it into a musical.

“I’ve been doing this a long time and I’ve directed over 103 movies,” said Decoteau, “so it’s nice that everyone can see them now.” Why he stopped counting at 103 directorial credits is anyone’s guess, but the reason they’re finally getting noticed is obvious.

I discovered A Talking Cat!?! on Netflix. By pressing play I’d not only watched the most mesmerizing movie of the decade, but signalled to Netflix that I wanted more of it. Dozens of Decoteau’s works emerged, many of them made in the same salacious mansion, with the same stiff actors, the same props (a reading light that scans both barcodes and erases memories), the same stock footage from Vancouver Island and California. Each movie was as artless as the next. The only difference is some are family romps with talking animals and some are homoerotic horrors with beefy shirtless men (some are both).

Going down that rabbit hole unlocked a giant easter egg that is the third wave of B-movies—straight-to-streaming schlocks made cheaper, faster, dirtier than ever. They exist to pad streaming and on-demand services’ libraries in order to impress upon the viewers the appearance of plentiful new releases. Under this model, Ed Wood is no longer a novelty joke but a pioneer.

Decoteau’s first film job, at 18, was on a Roger Corman set in the 1980s. Corman, a contemporary of Wood’s, though substantially better, had already established himself as the world’s most prolific maker of creature features. Swamp Women. The Beast with a Million Eyes. These ’50s schlocks were churned out for captive audiences in drive-ins and double-features that billed themselves as value-saving. You weren’t expected to sit through them. In fact, theatre owners were hoping you’d be restlessly in need of a trip to the concession.

The model for B-movies hasn’t changed much from the Great Depression era that birthed them. Sell a high-concept story on its title and poster, cast a known (but not necessarily respected) actor, commit to a tight production schedule and bargain costs. But by the time Decoteau was learning from Corman, budgets were even tighter because VHS had blown up the competition. “The more movies there are, the more competitive you need to be, meaning you have to become a little faster and a little less expensive,” said Decoteau, who always fancied himself more of a distributor who just took up filmmaking in order to have something to distribute under his company Rapid Heart Pictures.

If Decoteau and contemporaries were running on treadmills during the video and DVD era, then today—amid digital cameras, desktop editing and on-demand video—they’re sprinting in order to stay competitive. Decoteau would only schedule our interviews during his daily but brief exercise breaks, because virtually every other conscious hour of his life is spent planning, producing or pitching the next micro-budget movie. “I don’t celebrate holidays,” he said, breathing heavily. “I just like to keep working.” (It was Christmas break.)

“The technology now has gotten so cheap and the means of distribution so accessible to the average person, that everybody is making a film,” explained Dave Alexander, editor of horror culture magazine Rue Morgue. “They don’t even spend money on advertising. They just make them and get them out there. The business model seems to be: make it so cheaply that you can pre-sell it for a profit.”

For a glimpse inside the factory, I called Andrew Helm, the screenwriter of A Talking Cat!?! and other Decoteau and B-movie pictures. If Decoteau calls him in March, then they’re shooting in April. “He says, ‘Here are the factors: it’s being shot at the mansion and one other location, six people and a cat, or whatever the pet du jour is, and maybe this one actor for a day, like an Eric Roberts,” said Helm. “You look at it as a challenge and hopefully still find some good moments that are funny or touching or heartwarming amidst the insanity of trying to do this with limited everything.”

There’s a lot to respect about this blue-collar ethic, but the decline in quality at this level is impossible to ignore. “That’s what these guys have to do to make these things profitable in such a crowded marketplace,” said Alexander, who can’t even keep up with the press releases in his inbox anymore.

Competing requires both resourcefulness and trickery. Studios like The Asylum constantly churn out “mockmusters” (Transmorphers anyone?) on the coattails of a major Hollywood release. Decoteau told me one strategy is making his flicks not just faster and cheaper, but campier, more outrageous and ridiculous, hoping to essentially create the ultimate viral video. Also, whether by intent or serendipity, he’s exploited Netflix’s alpha-stacked queue with numerically named titles, hence the 13-part horror series 13:13.

Now, go ahead, click on 13:13: Bermuda Triangle and be simultaneously hypnotized and maddened by scene after scene of a man in tighty-whities wandering through the mansion calling out “Hello? Hello? Hell-oooo?” into a void. Then he’s struck by lightning and the next hapless victim enters. Watch. Repeat. Power-rinse the set.

Do the studios even expect us to watch this? Not always. In a cheeky blog asking people to merely “queue up” their movies, not even watch them, The Asylum admitted: “This isn’t about trying to get you to watch our movie. This is about gaming the system.” By doing this and nothing more, together they can beat the algorithms that rule Netflix.

For bad-movie lovers, it’s hard to say whether it’s a golden era or a dark age. “It’s such a disposable medium now that if you don’t like it within a few minutes, you can just get rid of it,” lamented Stuart Wellington, co-host of the Flophousepodcast that honours crap cinema. “I do kind of miss the experience of going to the video store, renting videos and being trapped with your entertainment.”

Whereas before a cult turd like Troll 2 and The Room—the latter often billed as “the Citizen Kane of bad movies”—seemed accidental, this new wave of schlocks and schlockmeisters are comfortable with and even proud of being ridiculed. “It’s the phenomenon now where films acknowledge that they’re bad because it’s easier than actually being good,” said Alexander. It’s the very definition of cynicism.

“For a bad movie to be genuinely enjoyable, it has to have a certain level of earnestness,” said Wellington. That’s why he and fellow “floppers” have avoided the camped-up Asylum pictures like Sharknado or other knock-off studios’ shark pictures like Sky Sharks and Shark Exorcist. It should come as no surprise that Corman jump-started the shark-rush with Dinoshark and Sharktopus, nor that Decoteau’s added 90210 Shark Attack to the shark canon.

A Talking Cat!?!, however, is “firmly in the good bad-movie camp,” said Wellington. And I agree. It’s so genuinely artless that it’s redeemable. Decoteau, his cast and crew are neither trying to make a good movie nor a bad one. They’re merely just trying to get this out one out the pipeline, but in doing so created a title far more memorable than some hundred-million-dollar movies.

Tragically, cruelly, A Talking Cat!?! and the 13:13 series weren’t relicensed by Netflix. As these things go, the movies must come and go to keep the libraries fresh. But there are three other Decoteau flicks still available, including A Talking Pony!?!.

Featured under its bland secondary title, A Pony Tale, its earnest animal star lacks the unintentional charm of Robertson’s apathetic performance (utterly perfect for a cat) but it’s unmistakably the same story-world. The eternally long, shaky establishing shots and tinny keyboard score ring with familiarity. Dialogue often feels like it’s being wrung out of actors and Kristine DeBell, the unapologetically self-involved mother, returns as the parent of a teenager coping with the panic of hearing animal voices. Only this time the girl decides not to tell her mom. It’s a marked improvement in believability and plot mechanics. Too bad.

Omar Mouallem has written for The Guardian, Wired and The Walrus. He served as the Edmonton Public Library’s writer in residence in 2013 and won the Canadian National Magazine Award for Best Profile in 2014. He’s written a book about cats. Now he’s writing one on kebabs. 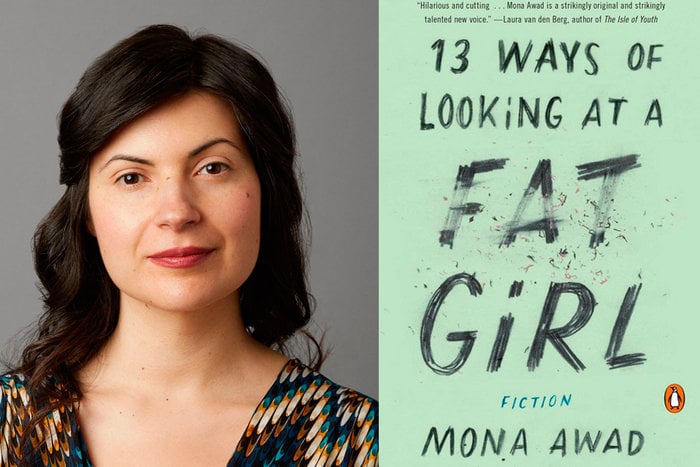 Interview
‘When We Change Our Bodies, Do We Really Change?’: An Interview with Mona Awad
The author of 13 Ways of Looking at a Fat Girl on self image, how music and dance inform her writing, and emotional… 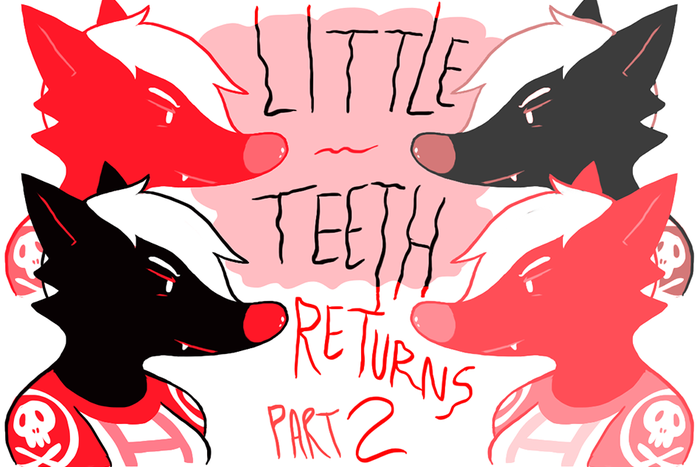 Comics
Little Teeth Returns Pt. 2
How are you this charming when you’re a mess?

The Year in the Meat Crime
Will Di Novi
They Speak Gilmore, Don't They?
Soraya Roberts