The Revolutionary Non-Compliance of Bitch Planet

Kelly Sue DeConnick and Valentine De Landro’s comic series is set in a wholly unrecognizable dystopian universe in which women are punished for being themselves. (Wait a second…)

Pilot Viruet is yet another writer living in New York City. She’s the Television Editor at... 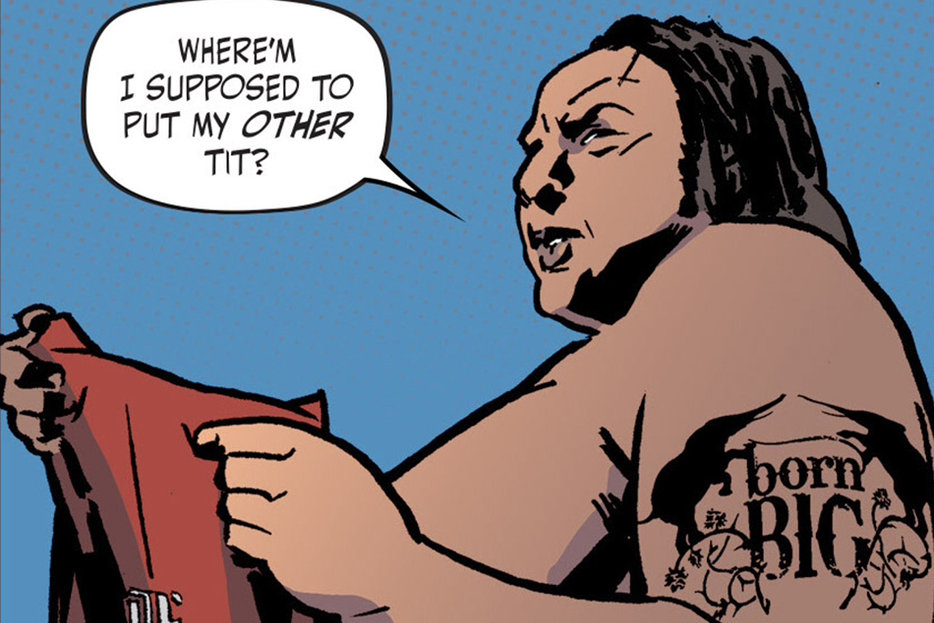 It’s been quite easy to sell people—friends, Twitter followers, barflies—on Bitch Planet. If, somehow, the name itself doesn’t immediately pique your interest, then the splashy pulp covers certainly will. For me, it was as simple as reading the question posed at the top of the first issue: “ARE YOU WOMAN ENOUGH TO SURVIVE?” It was a question that both dared and invited me to pick up the comic series, read it, and then immediately read it again.

From writer Kelly Sue DeConnick and artist Valentine De Landro, Bitch Planet is, in unfairly simplistic terms, a riff on the women-in-prison exploitation film genre but with a science-fiction twist: the prison is located on another planet. Women who are considered “non-compliant” are sent away to the Auxiliary Compliance Outpost, nicknamed “Bitch Planet,” and the series explores a dystopian universe that’s uncomfortable close to our own. “The joke is—the reality of it is—we’re already on Bitch Planet,” DeConnick says. “I just made it sci-fi.”

While we’re already used to seeing the lines blurred between the innocent and the guilty frequently depicted in both the comic book medium and the prison genre, it’s even more complicated in Bitch Planet. There are murderers, sure, but the crime of non-compliance—“a designation given by the patriarchy,” DeConnick says—ranges from woman to woman: cheating on your husband, having a body type or skin color deemed unacceptable, etc. It’s what makes Bitch Planet—the fictional planet and the series—so terrifying; many of these women aren’t being punished for committing crimes but for simply being themselves. “It’s not about their unwillingness. It’s that they don’t belong. They don’t fit. They aren’t good enough in the eyes of the patriarchy—it’s a literal patriarchy in this world.” To the patriarchy in Bitch Planet, non-compliancy is viewed as an evil and a wrong that must be righted. To many women readers of Bitch Planet, non-compliance is viewed as a necessary and radical feminist act.

One of the side effects of reading Bitch Planet is that you start to recognize certain real-life moments in terms of compliance vs. non-compliance. When I preface a question or end an email with an unnecessary “sorry” for no reason other than it being an ingrained speech tic, a way in which to politely apologize for my existence as a woman—that’s compliance. When I refuse to straighten my natural, occasionally uncontrollable hair, in order to better fit in with white society’s standards—that’s non-compliance. (In fact, one particular scene from the third issue stuck with me: a white woman brushing Penny’s kinky, curly hair, and saying, “it refuses to behave.”) Non-compliance has been flipped on its head, something that DeConnick loves: “You can take this thing that is used as a scarlet letter and make it a badge of pride. I like that.”

And it is, almost literally, a badge of pride. The letters “NC,” tattooed onto fictional Bitch Planet inmates by the prison, are now adorning the very real bodies of non-compliant readers. “When I read the comic, my reaction was so visceral and powerful that I knew I had to get this symbol tattooed onto me,” says Yana, a 29 year old from Vancouver, B.C. “It felt like someone finally understood and channeled all of that frustration and anger I had felt for so many years. I saw other people getting tattooed with the ‘NC’ logo and rallying around the idea of non-compliance—of not conforming to society’s ridiculous standards of appearance, femininity, gender, etc. It’s my way of saying ‘I won’t apologize for who I am anymore. I’m powerful, and fuck you for ever trying to beat me down.’”

For many people, non-compliance is a middle finger directed at the patriarchy, or at any detractors in their lives, particularly for those who are less privileged, something that DeConnick understands. “What’s interesting is a lot of the people who have adopted it have really latched on to the meaning of the term that says, ‘I will not comply. I will not assist you in your degradation and dehumanization of me’—‘me’ being marginalized people, whether it be gender identity or sexual identity or racial identify, or any of the many ways that we choose to marginalize folks.”

While rereading the first four issues, it became clear to me that Bitch Planet is a series that I have seemingly always been subconsciously waiting for, but I just didn’t know it was what I needed—or what the comic book world at large needed. It hits all the right marks. It’s about strong women, both physically and emotionally, because “sometimes just surviving in a world that tries to tell you that you don’t belong there takes tremendous strength.” It celebrates the importance of self-love—of fan-favorite character Penny, DeConnick says, “Penny’s crime is that she refuses to hate herself. Her revolutionary act is to see that there is nothing wrong with her.”

And, of course, Bitch Planet is also proudly and unabashedly feminist without being cloying. Then again, it’s hard to go overboard in this world; DeConnick said she sometimes feels as if she’s overdoing it, specifically referencing the Hailey and Kailey videos in issue no. 4. “Then I got on YouTube and went looking for ‘Football 101’ videos that were aimed at women and found something that was so much worse than what I had written.”

On a technical level, the way in which DeConnick and De Landro manage to create a riff on exploitation films without crossing the line of being exploitative itself is a masterful feat. It’s obviously tricky—the fourth issue was delayed because they were trying to get a shower sex scene to be just the right blend of exploitation tropes without catering to the male gaze. “I think I might be overthinking it a little but I’m glad that we’re being so mindful of it,” DeConnick says. “On the one hand, you want it to live around the tropes and on the other hand, I don’t want to just be like ‘Well, we’re part of the problem!’ Comics have a long tradition of setting up these incredibly salacious situations so we can then come in and wag our fingers on it. I didn’t want to do that. That feels easy.” The intention and the careful attention are apparent in the final scene, showcasing a thoughtfulness that should be essential in all comics.

Then there’s the issue of diversity. My introduction to comic books came through the Archie series, solely because they were readily available in department and grocery stores—it took until high school before I felt “ready” enough to step into the largely white- and male-dominated comic book shops. Archie was—is—enjoyable, but there’s no denying that it takes place in a world that is not exactly the most diverse or inclusive, and doubly so years ago. I saw Nancy, the series’ token black woman character, and noted how she was basically just Betty or Veronica—all identical bodies—but darker. There was no variation in bodies in Archie, nor were there variations in skin tones between Nancy, her black boyfriend Chuck, and Josie and the Pussycats’ Val. It was light diversity, so to speak, and purely superficial.

Bitch Planet, on the other hand, has a remarkable and almost shocking variety of colors and body types. It’s necessary: as Danielle Henderson notes in her essay in the first issue, “African American women are three times more likely to be incarcerated than white women.” Though originally nervous, DeConnick knew that “pretending otherwise would have been a disservice.” Artist Valentine De Landro has done an extraordinary job depicting these women (and credit must also be given to Cris Peter’s coloring (“In our book, there’s not one black and there’s not one white either”), and artist Robert Wilson IV who stepped in on issue no. 3), effectively telling the world that there is more than one body, more than one ideal.

In lieu of the perfect tiny body—think of the carbon copy women in Archie, nearly identical but with variations of hairstyles—Bitch Planet explores all types. “There’s a two-page spread where there is this very pear-shaped woman standing in line. I remember when that spread came in being really mesmerized by her because I realized it’s a body type I’d never seen on a comic page,” DeConnick says. “That’s a woman—that’s a shape—I know well from real life, but I had never seen that woman on the page of a comic book before. And I was so impressed with Val for recognizing that and for working so hard to make them all individuals.”

For about two full decades of my comic-book-reading life, I was told too frequently that this fantasy world I loved wasn’t necessarily a world I belonged in, either as a reader or a creator. My skin was not foreground material, but reserved instead for nameless extras in a corner or token afterthoughts to quell complaints. In Bitch Planet, in the bodies and the colors, I can finally find myself on a page.

Pilot Viruet is yet another writer living in New York City. She’s the Television Editor at Flavorwire and her writing has appeared in The A.V. Club, The Hairpin, Grantland, and more. 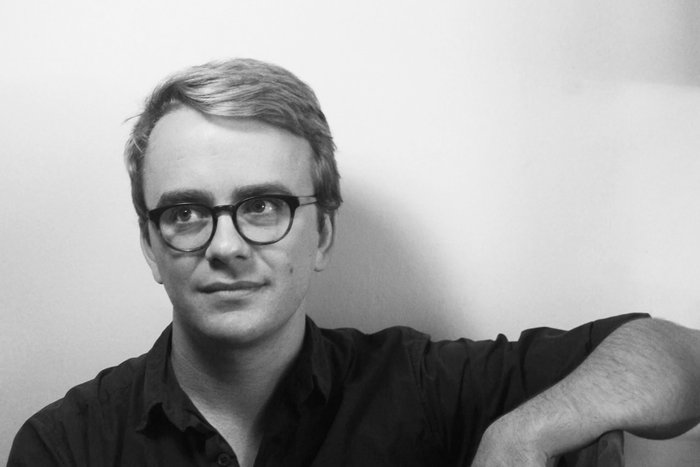 Interview
‘I Don’t Think The Truth Is Totally Unknowable’: An Interview with Richard Beck
The author of We Believe the Children on the 1984 McMartin Preschool sexual abuse case, the history of moral panic, and…

Paper Trail
Page Four: A Dalí Journal
Salvador Dali writes like he paints and paints like he writes; he is lyrical in his natural settings, and deeply…