Guilt Upon the Body

The Hillsborough Disaster and the inquest into it were about lying cops. After 27 years, the right words are finally being used to talk about the dead. 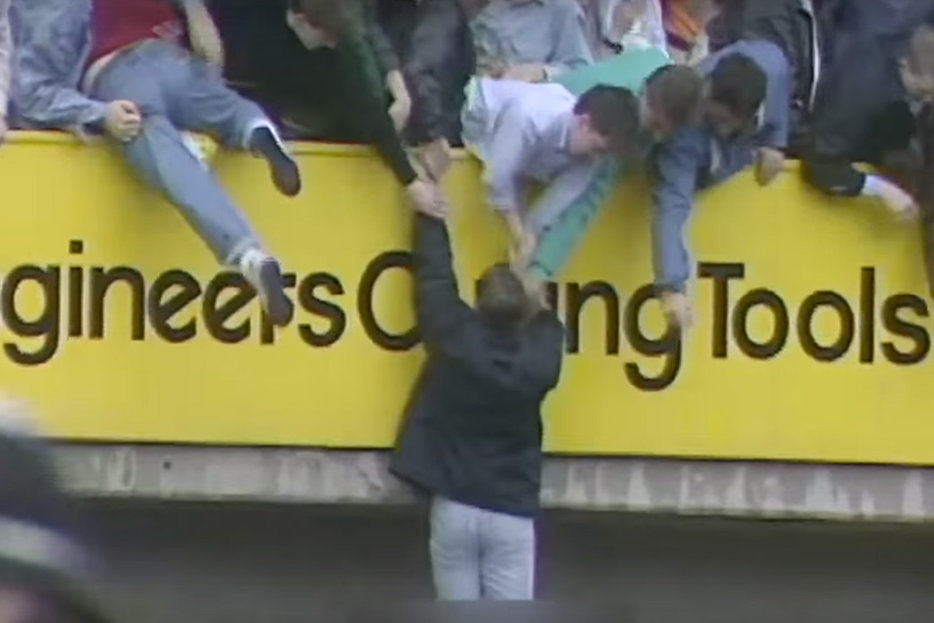 Image via footage released by inquest

The lasting image is one of bodies, in shapes and places no body should ever be. A leg swings up, trying to catch the edge of a balcony, hands grasping. Fingers wrap around the bars of a cage in desperation. Chests and lungs have no room to expand to take in breath, and bodies in motion become lifeless and still. Hypoxic, their airways crushed, the bodies are loaded onto advertising hoardings, carried across a football pitch, a place where few bodies are ever permitted. The sacredness of the pitch collapsed, morphing into a makeshift trauma ward, as emergency medicine replaced the game they had all come to see.

Before we see the bodies, we see only faces, an ocean of faces, swaying and pulsing and singing, a motion and a sound that, now, after, sicken. The crush begins. The yellow PRESTO Engineers Cutting Tools sign, cluttered with the frantic limbs of those escaping, its colour and typography indistinguishable in memory from the bodies falling over it, hangs over so many images. The befores, the durings, the afters. The pale grey of the terrace concrete, the blue of the painted cages, the green of the pitch, the black text of the ads. The grainy footage coming across television screens of that day in Sheffield is all bodies and words, bodies and words. Too many bodies, and all the wrong words.

One April 15, 1989, ninety-six supporters of Liverpool Football Club were crushed to death in the “pens”—with six-foot-tall railings on either side, and a mesh wire cage at the front—at the Leppings Lane end of the Sheffield Wednesday Football Club ground. They had come from Liverpool to watch their club take on Nottingham Forest in the FA Cup semi-final. As fans gathered in great numbers outside the stadium in the run up to the match, the South Yorkshire Police force in charge of controlling the match opened an exit gate to relieve the pressure. Fans poured into standing-room terraces through a tunnel, which police had failed to close, into two pens already full of supporters. Because of the design of the pens, the fans could not escape the pressure of all the bodies. 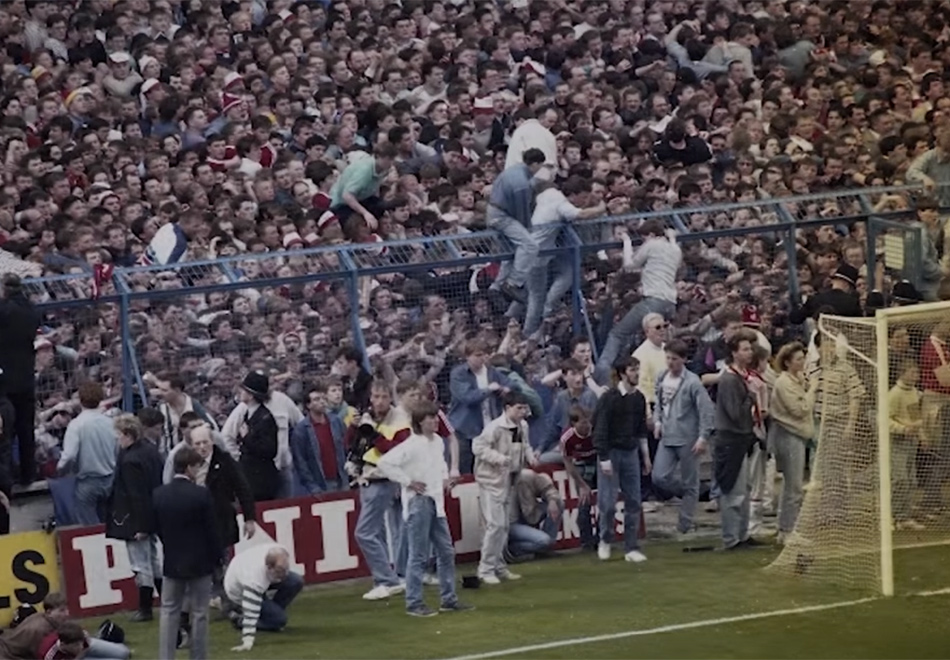 South Yorkshire Police commander David Duckenfield was watching from a police control box inside the stadium as it became clear people were being crushed to death. When FA officials asked what was happening, he lied—fans had broken through the gate and stormed the stadium, he said. Later, there would be cops eating their dinners—chicken, possibly fried, and chips—in the gymnasium, next to bodies with crushed chests and throats. Families coming to identify their dead could smell the food. Later still, the South Yorkshire police hierarchy would doctor witness statements from their own officers to hide policing failures.

Almost immediately, the ascribing of guilt to dead bodies was deemed a police necessity. While the recently killed were still being identified in the gymnasium near the pitch, the police were inspecting the blood of the dead for alcohol content, and inspecting their names for criminal backgrounds. What was the blood alcohol level of a ten-year-old boy, Jon-Paul Gilhooley, the cops decided they needed to know. (It was zero.) Were these people criminals before they were crushed to death in the Leppings Lane terraces? What words can we attach to the bodies of dead? 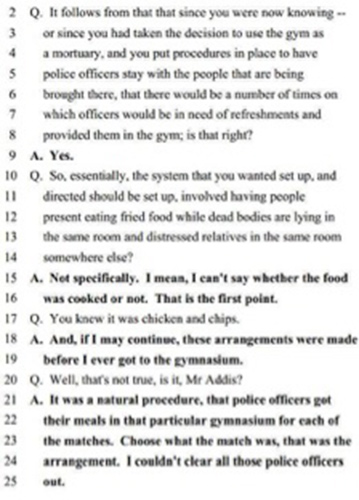 I watched the cop’s twitching face in a high-tech courtroom in the Birchwood office park in Warrington, which sits between Manchester and Liverpool. Police planning failures and a subsequent cover-up by the South Yorkshire police have forced the families of the 96 to spend nearly three decades seeking justice. In addition to the doctored witness statements, the police deployed false narratives. They wanted everyone to believe the disaster was the fault of the fans, drunk and violent.

The courtroom was perhaps the opposite of a football ground’s terrace. The bright fluorescence of it. The tidy way spoken words hung in the air. The room devoted to the orderly placement of words. They must come out in the right order, at the right speed. They must be heard by the right people. They must be the right words. These words must bring justice, now, finally. And last week, they did. The jury, in the longest-running jury trial in British legal history, ruled that the fans had been “unlawfully killed” and bore no part of the blame.

Between the terrace and the courtroom was the red-top tabloid. Like the courtroom and the cops, it tried to attach words to bodies. In the days following the disaster, the Sun newspaper had declared the Liverpool fans had urinated on and stolen from the bodies of the dead, the only evidence for that assertion coming from a Tory MP. Words are sometimes careful, and sometimes they are a hateful mess.

Sometimes a city frees itself of a newspaper’s words for twenty-five years, which is the best outcome not involving flames. The small newsstand inside the courthouse did not sell The Sun. The Liverpool Echo put an asterisk in the middle of the dirty word: The S*n. Words flung at bodies, barely buried. Last week at the press conference organized by the families of the dead, The Sun was not welcome. 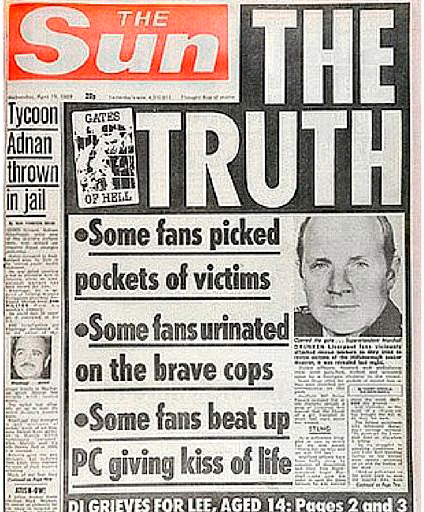 At the inquest, I watched discussion over what the body of Assistant Chief Constable Walter Jackson, an upcoming witness, should be forced to do for the sake of the trial. Lawyers for the families wanted to see Jackson’s body in a witness box in the same room as the jury. Cop lawyers would have liked to allow his body to remain where he wanted it—at a distance, linked by video. His body was elderly now, was the argument—they wanted some comfort afforded it.

Margaret Aspinall sat in the front row of the gallery. Her son James was eighteen when he died in the pens in the stadium. Since then, she has sat in many rooms, listening to learned coroners speak about the circumstances of her son’s death. Watching that cop’s twitching mouth did not help her healing process, she told me. Regardless, she had fought for this chance to watch the twitching mouths of cops. The fight had characterized much of her life. In her leather jacket, smoking tensely outside the courthouse, riding trains and busses across England for three decades. She had her son’s picture on the cover of her phone. In two years, she had missed only a few days of the inquest. She had listened to cops and ambulance drivers and doctors and nurses talk about what happened. She had heard that if cops had said some very specific words, things might, just might, have worked out differently. Had the police and the ambulance service swiftly declared the apparent crush a “major incident,” the words would have triggered certain procedures at hospitals, at ambulance dispatches. Cops wouldn’t say the words. They called it an “accident” while the disaster unfolded.

Margaret Aspinall had been fighting for decades to show that bodies and words matter. The upper echelons of the South Yorkshire Police knew the words mattered, and they deleted them accordingly, and introduced new ones: The fans rushed the stadium’s gates, causing the disaster. The lie started just after people had died that day in 1989, and lasted until last week. 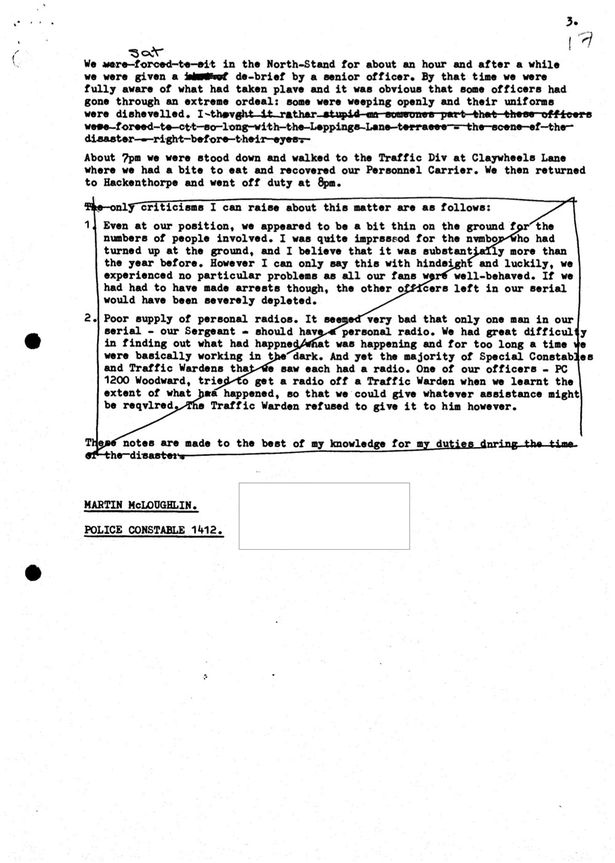 In 1981, British Prime Minister Margaret Thatcher had been advised to allow Liverpool to slip into a “managed decline” and not commit any resources there during the Toxteth riots, when the city’s Black population rose up against a racist police force. In a speech to a Conservative Party conference, Thatcher referred to striking miners as “the enemy within.” The South Yorkshire Police force, which attacked and tried to fabricate charges against striking miners at Orgreave in 1984, was the same police department in charge at Hillsborough. Margaret Thatcher had spent the better part of the 1980s convincing her country there was a war going on—a war between a feral working class and the forces of law and order. So when The Sun shouted that fans had urinated on police, that they were drunk, that they attacked those trying to help—when the cops told the country that the 96 deaths were the fault of the fans—Thatcher had already primed the county to believe the lies.

The Hillsborough Disaster (and the inquest into it) was about lying cops and cops not being allowed to tell the truth. It was about disrespect for the dead. It was about mothers and sons. It was about the mothers of Kevin and James, Anne Williams and Margaret Aspinall—the Iron Ladies of the Merseyside. It was about bodies and words. Bodies matter, and words matter.

Bodies matter in death as in life. They matter when lined up in rows in a gymnasium while their blood is inspected for alcohol amidst the smell of cops eating chicken. Or when they are left on the pavement for four and a half hours, blood pooling in the street, like Michael Brown in Ferguson. Bodies matter when the police try to pin words to the dead, words such as guilt and fault, and rushed and thug and yob. Through police impunity and victim blaming, “accidents” and “disasters” harden into state violence: the dead posthumously criminalized and the survivors painted as brutes, told their lives don’t matter.

It has taken the Hillsborough families twenty-seven years to force these cops, their media, their government and their country to listen to their truth: these words matter. Last week, as they held each other and sang, we heard them. 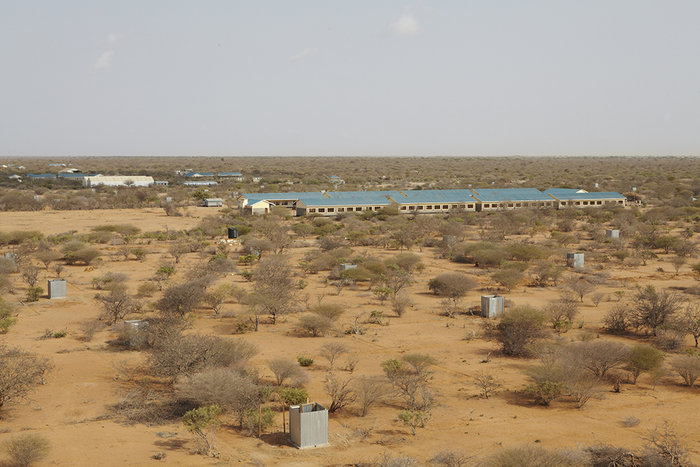 Interview
‘It’s a Crisis Because There Are No Answers’: An Interview with Ben Rawlence
The author of City of Thorns on generational pain, the context of radicalization, and the weight of place. 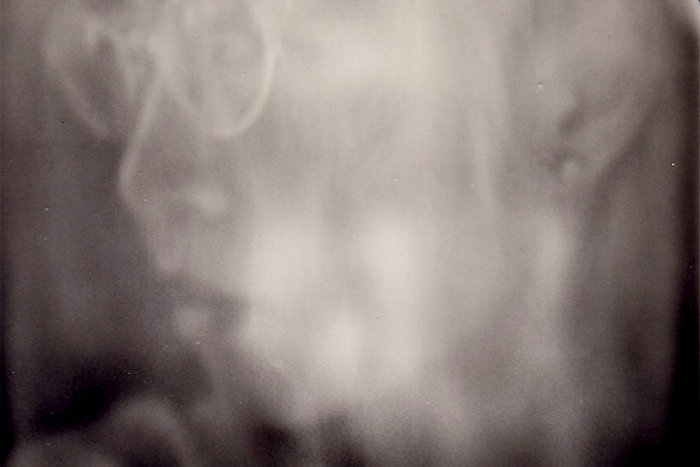 Essay
Dialogue with Francesca Woodman
The well person has the job of translating the images that the sick person has left behind as evidence.

‘The Last Gasp of Capital Punishment’: An Interview with Maurice Chammah
Andru Okun
What A Time To Be In Decline
Ethan Lou