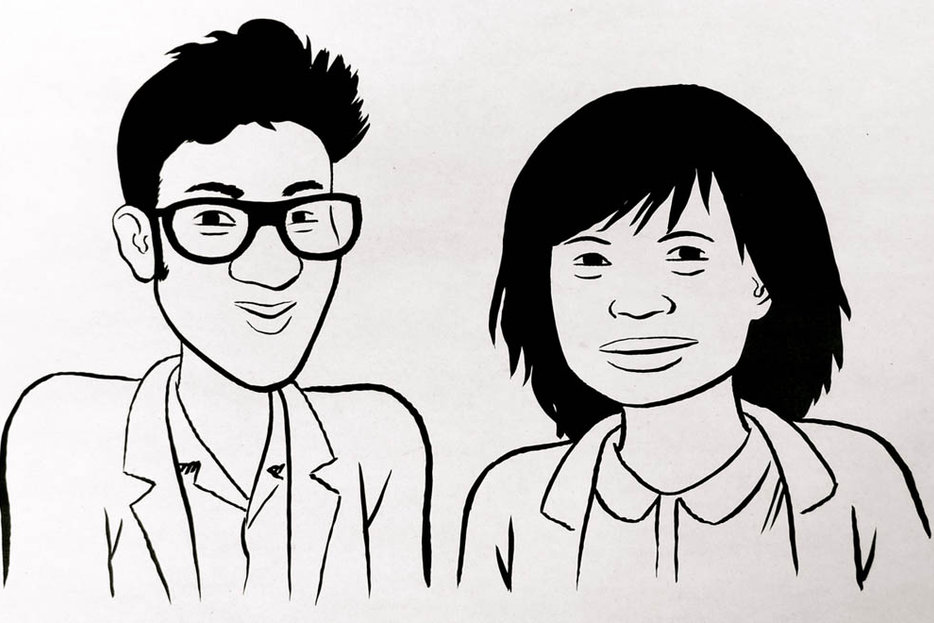 Every week or so, Sook-Yin Lee and Adam Litovitz have a movie date. Then they talk about the movie. Discussed this week: Silver Linings Playbook, directed by David O. Russell.

SOOK-YIN: It’s a long title. I can’t remember… something about silver linings…

SOOK-YIN: It’s a kooky romance between a bipolar guy and a nymphomaniac woman in a crazy, mixed-up world.

ADAM: And a peanut gallery of assorted characters, such as his parents played by Robert DeNiro and Jacki Weaver, who reminds me of the neurotic, overbearing mom in every other David O. Russell family drama, from Flirting with Disaster to The Fighter.

SOOK-YIN: When we first meet their son Pat [Bradley Cooper], he’s just getting out of a psychiatric institution; there’s an assault in his past and he’s been put in the crazy house. Now out, he goes to live with his parents. Bradley Cooper continues to take on unusual roles. Every character he’s played, from The Hangover to Limitless, is mentally challenged. I wanted to see this movie because I’ve been compelled by Jennifer Lawrence ever since I saw her in Winter’s Bone and The Hunger Games. She has a fantastic presence, like a Shelley Winters for the 2000s. There’s something very straightforward, coarse, and gorgeous about her.

ADAM: In this, she’s forced to be a little too hot-cold and suddenly bold for my liking. She’s put into these high-stakes emotional situations, going from being totally disorderly to totally together. I liked her in Winter’s Bone, but I need to see her in good stuff. I’m not like you. I can’t get into actors as much without seeing them in good roles. These characters were too aware of themselves and were over-defined by their big problems.

SOOK-YIN: Maybe Poseidon. Definitely not Shelley Winters from The Tenant. I’m talking more about her presence.

SOOK-YIN: It’s curious to see a mainstream picture trying to deal with mental illness, in this case Pat’s bipolarity and the grieving widow Tiffany’s nymphomania. Here, Lawrence is confined to a stereotype. Like Melanie Griffiths in Something Wild, she’s the crazy chick who helps the guy get in touch with his emotions.

ADAM: It’s the can’t-fail formula of two misfits finding each other in a world they don’t fit into.

SOOK-YIN: How do you make a meaningful movie about mental illness and also a crowd-pleaser? This felt like a tug of war.

ADAM: And it borrows heavily from some of the most crowd-pleasing American movies of the last 25 years—everything from Scorsese’s Italian-American milieu of wild gambling and family meatball-making, to dance sequences out of Saturday Night Fever and Pulp Fiction. There’s even a diner scene that echoes Pulp Fiction, with a couple trying to get to know one another in an awkward, highly artificial situation while served by costumed waiters and waitresses.

SOOK-YIN: It’s also like Moonstruck, it had a Norman Jewison quality. The problem is that there have already been so many fantastic movies that deal with mental illness. Bigger Than Life with James Mason, about a father going slowly mad. Or Henry: Portrait of a Serial Killer, a foray into schizophrenia. Or Cassavetes’ A Woman Under the Influence, in which Gena Rowlands struggles with myriad difficulties while trying to be a good wife and mother. Silver Linings Playbook was trying so hard to be Cassavetes, with a loose, potent, crass, improvisational quality, but it felt like a weakened version.

ADAM: I’d borrow one of your favourite words to describe it: initially, it seemed like a “cudgel,” using quantity of dialogue to make up for lack of thoughtfulness. Not to say that it was inconsiderate. But characters are filling up dead space with conversation. If Aaron Sorkin can use fast-paced conversation to simulate intelligence, then this can be said to simulate a neurotic variant.

SOOK-YIN: Within the first two minutes, we’re already dealing with a lot of clichés around mental health. The first one is seeing Pat at the psychiatric institute taking the pill in his mouth, then secretly spitting it out. We’ve seen it a million times. It’s shorthand for the mad rebel.

ADAM: Later, flashbacks are used to indicate the “traumatic event” that he continues to return to. Not only is there one specific trauma at the basis of Pat’s illness, but there’s even a song that triggers him, Stevie Wonder’s “My Cheri Amore.”

SOOK-YIN: The filmmakers are using these large gestures in an attempt to convey a story.

ADAM: There’s even a climactic dance scene filled with manic energy that leads up to a Dirty Dancing-style “final move.” The movie is constantly basing itself around giant gestures that hope for some large-scale payoff. 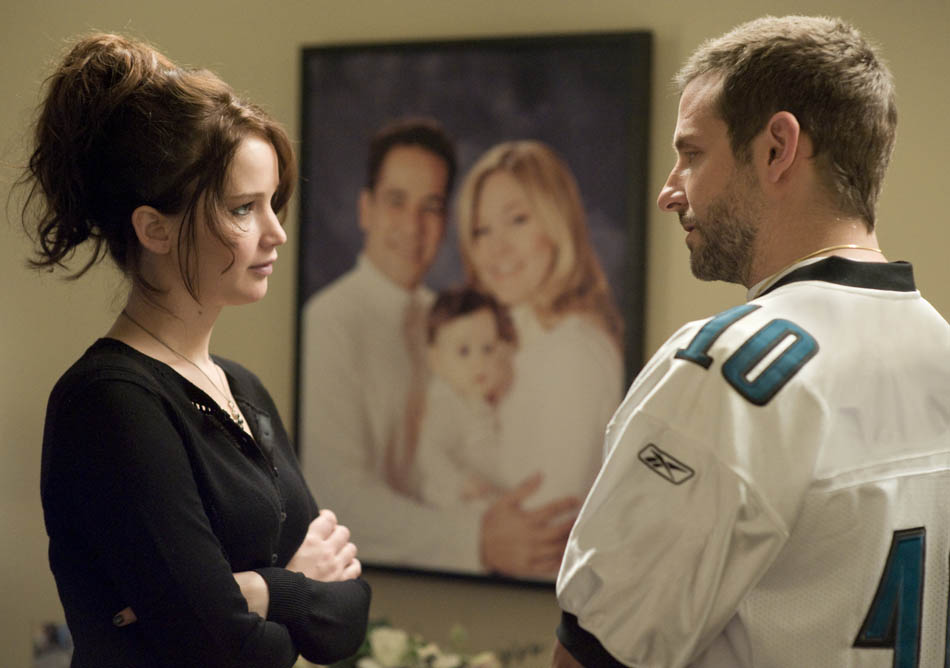 SOOK-YIN: And yet, as much as I sound critical of its attempt to portray mental illness, I found myself—and not because I’m PMSing—but there were points where I was really bawling my head off. It wasn’t exactly three-hankie but it was a solid two-hankie movie for me. There’s something about Lawrence’s explosiveness and the blank quality of her face. She conveys small moments of trying to get through to Pat, guided by care and yet so flawed. Her attempts to connect with him were moving.

I’m not such a fan of Bradley Cooper, but I was charmed and convinced by him. I loved the two of them together, and I’m a big suck for love stories. The two actors are creating interesting moments, but because of the dressing and mise en scène, it didn’t hit the mark. Two people at odds trying to communicate is very profound, and makes me weep, but I’m distracted by being told by the filmmaker that Pat’s crazy, and that we should know this because he’s wearing a garbage bag as a coat.

ADAM: I was thrown out of the movie for various reasons too, including the costume situation. Pat shows up at a fancy dinner party in a football jersey, leading to the obvious why-are-you-wearing-that tensions, and there meets the other misfit, Tiffany, who always wears slinky black dresses because she’s a widow and a nymphomaniac. When she’s called a slut, she folds way too quickly to convey an authentic emotion. Then she has a prepared “I am a slut” speech that just sounds written. Somebody’s come up with a fully-formed speech about what it’s like to have been a slut. The movie puts too many words in its characters’ mouths.

Structurally, it also annoyed me. Pat and Tiffany run into each other jogging one morning, then they devise a plan, then there are, of course, two other scenes of them jogging which continue that arc. It has a schematic and familiar quality: the couple working towards a dance routine.

SOOK-YIN: Although, I cried during the dancing, too. I’m a sucker for dance scenes.

ADAM: Romance is one of those things that when it hits, it works, seeing people getting beyond the mundane aspects of their situation. In Dirty Dancing, you’re surprised to see a teen camp movie turn into something involving abortion and serious feelings. It works you through traditional arcs, but feels like a lived-in community.

For me, Silver Linings Playbook was a mostly misplayed attempt at a zany screwball comedy. Though, I thought towards the end it was able to take it over-the-top by accepting that it wasn’t trying to present its situation realistically. DeNiro’s willing to put his family on the line for a sports bet based on a superstitious belief. Eventually, the movie embraces its own voodoo and alchemical goings-on. This is traditional for screwball romances. Zany stuff leads to a couple getting together, and we’re left to wonder whether it’ll last. Every romance is a movie about crazy people momentarily working out issues.

SOOK-YIN: You’re right. It’s a very calculated comedy-romance dressed up in mental illness. Having mental illness in my family I know it’s no cakewalk, and not so funny-fun ha-ha. I don’t think you can do a formulaic romantic-comedy with craziness as a device. A filmmaker doesn’t have to go to Cassavetes’ degree of taking you through Mabel’s journey in Woman Under the Influence. To some, that movie was torturous, but I found it truthful. Here, people suffering from bipolarity or OCD or nymphomania are played for laughs, or they’re endearing. I didn’t really see the struggle.

ADAM: The characters are simply played as underdogs. A lot of movies about mentally ill people, like Sam Fuller’s Shock Corridor, with its confused ensemble feeling, can mine hyperbolic, wacky antics. Movies aren’t being trite about mental illness just because they have laughs. But Silver Linings is problematic because we’re so aware of the paces the script puts these characters through. We aren’t allowed to ruminate about their situations. In other movies like Greenberg or Momma’s Man or Young Adult, that deal with arrested adolescence or the inability to cope with societal pressures, you get to dwell in the characters’ situations and don’t feel like a scheme has been laid out for them. Interesting and surprising things happen to them that amount to a character study. In Silver Linings, the characters and twists and turns and mise en scène are pro forma.

SOOK-YIN: Mental illness is complex to depict, and in a 90-minute-plus Hollywood movie that has to keep it going, they resort to clichéd situations: the kooky psychiatrist, the family struggling for upward mobility while being insane.

ADAM: And the movie didn’t slowly usher us into the romance. The couple has an instant, exciting rapport with laser-like eye-contact and lots of punchlines.

SOOK-YIN: I did find there was electricity between the actors. I had three distinct moments of crying, anomalies where it got me. It’s something when a movie can do that. I didn’t feel robbed. I remember seeing The Joy Luck Club and feeling completely manipulated. My tears made me so angry.

ADAM: If I’m going to see a bipolar guy wake his parents up with wild rants about needing to find his wedding photos, it better be Tom Green, and it better be 1999.

SOOK-YIN: Some of our best minds are bipolar. In this case, they took it way over the top. Tom Green waking his parents up to show them that he’s painted the house plaid is totally real and groundbreaking. In this, Pat comes to the end of a Hemingway book and has to throw it crashing through a window. It felt like a movie’s crazy person.

ADAM: Or the type of sitcom that uses handheld cameras.

SOOK-YIN: We also see how Bradley Cooper’s refusing his meds backfires on him. We then see him recovering by taking the meds. Are we reconfirming mental health assumptions that are out there? I have a friend who swore off his assorted, conflicting meds because they were making him bloated and suicidal. He found focus through meditation and bicycling. For some, it’s a successful option to go off meds. Pat’s decision to go off meds was treated like a mistake, which reconfirms accepted notions of the psychiatric profession. The movie makes small criticisms of the psychiatric industry, while kowtowing to the pharmaceutical industry.

And as someone who struggles with dark moments, sometimes I just found it to be untrue.

ADAM: There was nary a darkness to be found here.

SOOK-YIN: Mental illness as a transformative means of falling in love with your dream girl and boy.

ADAM: The title Silver Linings Playbook captures it all. The movie presents you primarily with a silver lining. It doesn’t present darkness or whatever the opposite of play is, something confining and difficult.

SOOK-YIN: It doesn’t embrace playfulness either. It wants to play, but never fully does.

ADAM: It plays by the book. 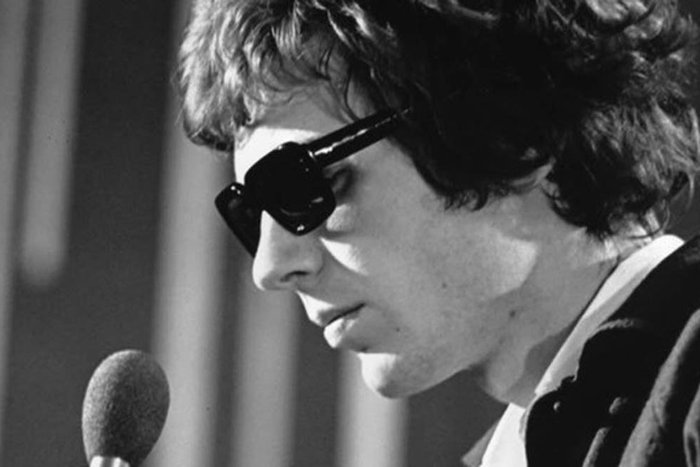 Music
Scariest Music in the World
Scott Walker was once a pop star; he is now an artist whose albums—including Bish Bosch, which comes out today—are…