The Female Gaze of Sally Mann and Kim Kardashian West

In new books, Mann and Kardashian West exploit moments of subjectively felt beauty and power to capture the material world around them—one often, by default, represented through a male eye. 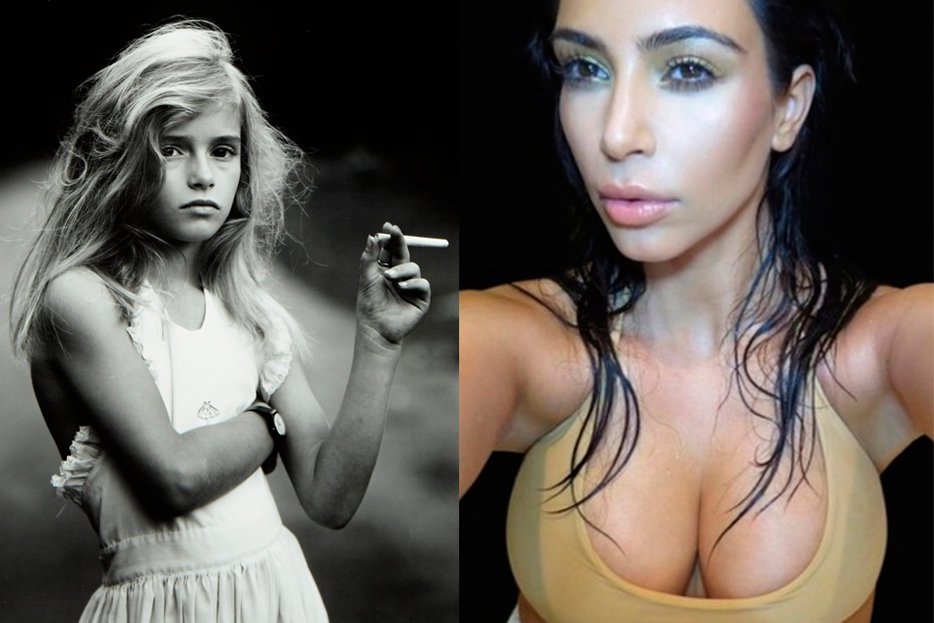 From left: "Candy Cigarette" by Sally Mann and the cover of Selfish by Kim Kardashian West.

My father was a photographer, which meant the house I grew up in contained more pictures than words. Before I could read, I built careful forts using the high-gloss monographs of Yousuf Karsh and Edward Stieglitz, whose portraits of Georgia O’Keeffe fixed me, in my precarious position, with an indelible gaze. There was little escape—Ansel Adams prints patterned the hallway to my bedroom, making the hardwood passage feel like a path cut deep into the Yosemite cliffs.

When I found Sally Mann’s work—its arrestingly private views of family, of bodies, of something too subjective to name—my understanding of the way a photograph bore through the eye, inward, proved useless. Here were photographs so technically familiar, yet completely alien in terms of how and what they showed: the bracing intimacy of a mother’s connection to her child. A wife’s perspective of her husband’s ailing body. She was the photographer who made me realize I’d only ever looked at pictures taken by men.

“Exploitation lies at the root of every great portrait, and all of us know it,” writes Mann in her new photographic memoir, Hold Still. Now 64, she admits a more careful relationship to her portrait subjects—not for fear of controversy, but because, as she recently told Paul Roth in conversation at Ryerson University in Toronto, her images may cause the model pain.

Mann and Kardashian West are both women (I know, crazy) who squarely capture the material world before them—one that is, by default, typically represented through a male eye. In disparate ways, they do this by exploiting moments of subjectively felt beauty and power, unique to their point of view. Mann photographs her husband’s deteriorating muscles; her children’s nascent sensuality; land privately held by people with sheds for their shotguns. Kardashian West incrementally marks her crystallization into a celebrity, her face a mask of radiant angles; body hand-sculpted to perfection. The male gaze undeniably informs Kardashian West’s transforming appearance, but the images in Selfish primarily capture the moments between public engagements—the private retreats to bathrooms and green rooms and darkened limos. Kardashian West’s best selfies project stoic loneliness, her eyes filled with a Van Eyck intensity.

Privately made, publicly released images brought both Mann and Kardashian to infamy (in 1992 and 2007, respectively). For Mann, the offense was Immediate Family, a photo series featuring her three young children, often nude; for Kardashian West, a low-fi sex tape. The two share something else vital, though: both magnetize the eye with their photographs. By facing where they turn the lens, we play an empathy game in which we are compelled to stand where they stood. In the case of Mann, the gaze points outward; reversed, Kardashian West makes us her mirror. But each reflects something unabashedly selfish, repeatedly and without apology. While Kardashian West’s book is literally called Selfish, Hold Still is just as egocentric a title—Mann’s desire made verbal, taking full ownership of what is before her. And if, as Mann admits, a portrait may cause pain, has Kardashian West circumvented that possibility by being her own portrait maker?

Sally Mann, a Guggenheim and National Endowment for the Arts Fellow, recipient of an honorary doctorate from Corcoran College, and countless other prizes, is one of the most accomplished fine art photographers working today, with an enviable reputation that includes legitimate artistry and accusations of depravity. Mann was born in Virginia to a Southern country doctor and Bostonian mother. She still lives and works out of her remote family cabin whose luxuries include running water and a level of privacy near-frightening in its completeness.

Kim Kardashian West is Kim Kardashian West, and any accomplishment rings irrelevant next to the iconicity of her name. But, just for fun: Kardashian West has a wildly successful career as a reality television star, a career that she leveraged into products including Kim Kardashian: Hollywood, a mobile phone game that made over a million dollars in its first week of sales and is now one of the top downloaded games in the App Store. She has a gift for making people identify with her while simultaneously acknowledging the absurdity of such a thing. She is married to Kanye, her equal in fame and height, depending on the heels.

Undoubtedly, Kardashian West’s celebrity eclipses Mann’s, but in Hold Still, Mann articulates what it’s like to shift from anonymity to notoriety in an instant. “When the spotlight of celebrity, which seems to shine more brightly in America than anywhere else, directed its beam on our family, it brought […] issues, heretofore unexamined, into bright relief,” she writes of the time she provoked everyone, prudes and aesthetes alike, with images such as this one of her daughter Jesse, smoking a candy cigarette. 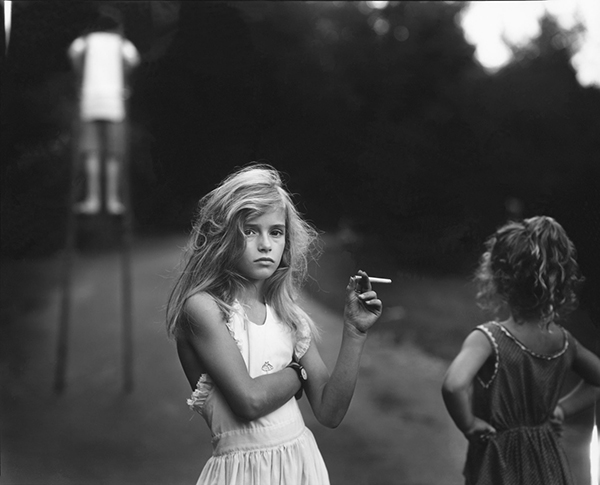 More than twenty years after publication, people still go at the family pictures like “a dog with a bone,” says Mann with palpable exasperation, citing a recent interview with Terry Gross, in which the Fresh Air host persisted in implying that Mann had eroticized her children, trying to tease out an admission that didn’t exist. “I don’t think I sounded too pissed off,” Mann says of that experience. While resistant to shame in her work, Mann does write about the emergence of a shameful self-consciousness—a third eye, as she calls it—lowered upon her children, who had previously stood before her without awareness of the camera’s connection to a judging world. By comparison, Kardashian West has sought out and flourished in the flashbulb pop of celebrity. Over the eight years documented in Selfish, she seems to grow into a glossier performer and sharper portrait taker. Instead of withering under the glare of that third eye, you see her become more serene and sculptural, face a trompe l’oeil of makeup, shoulders drawn back and chin defiantly atilt. There is no Romanesque counterpose, no soft recoil. Instead, Kardashian’s postures speak to some of Cindy Sherman’s more recent images, with all their colour and guile.

For Mann’s exposures (she mostly shoots and prints using arcane equipment and techniques), any whisper of movement from her model, the camera, herself, might change the outcome. Kardashian West, whose tools range from digital point-and-shoot to Blackberry to iPhone, trades Mann’s expansive view for immediacy. Both artists work with time, rather than against it. “Photos are memories to me,” says Kardashian West in one of Selfish’s brief text breaks. She is not alone in wanting to contain a moment, although Mann beat her to taking an extreme selfie when, in 1985, she captured herself giving birth using an 8x10 view camera. Even as a series of bodies and blurs, the long exposure makes time visible. As Kardashian West says in Selfish, “[When] I see an image all of the details of the day or moment come alive for me.”

We all feel something like that about the photographs lining our walls and crowding our phones. But articulating it as Kardashian West does implies the inverse: that Selfish is a trove of memento mori, each selfie marking the death of an event, an outfit, an especially bouncy blowout. And it’s hard not to feel that too with Mann’s images—growing children inImmediate Family, or her husband Larry’s physical decline under the force of muscular dystrophy, as in Proud Flesh.

“Ultimate beauty requires that edge of sweet decay, just as our casually possessed lives are made more precious by a whiff of the abyss… the only true perfection is a lost perfection,” writes Mann near the end of Hold Still, in light defense of her sometimes-macabre tastes. But, as Kardashian West shows, every day has its own sweet decay, when the lashes are ungummed, the bodycon dress unpeeled, and the lights clapped off. Mann and Kardashian West make what they can of the waning light, and put themselves in it—not because they are any more vain or narcissistic than the next person, but because they want to live on in the moment, the residual image an invitation to us to be there with them. “Photography is always invasive, but these experiences are consensual, and in the best hours, transcendent,” concludes Mann, consent being the key.

Throughout time, the female body has been treated as a conduit to identity, representation of face and form, and a way of invading the very personal experience of what it means to be female. To be any kind of woman draws commentary and control, exoticization, appropriation and counter-appropriation. Behind (or in front of) each camera, Mann and Kardashian West make images that stir powerful impulses in the viewer, provoke a frenzy of attachment and attack, commentary by turns loving and menacing—they wield, and exploit, their female gaze with different outcomes. Worlds apart though they may be, we are looking at them, and we are not looking away. 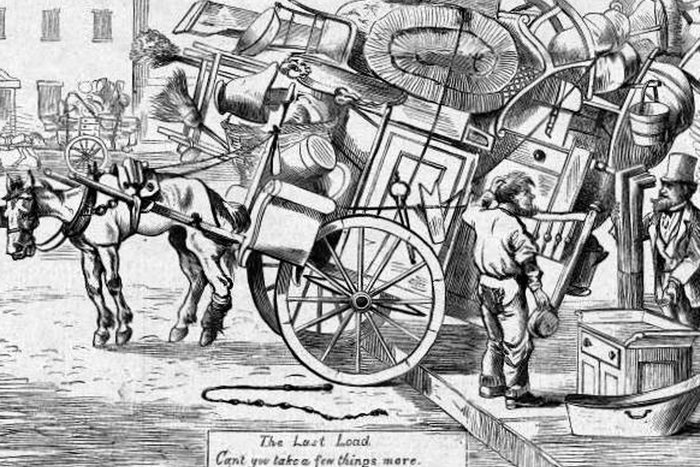 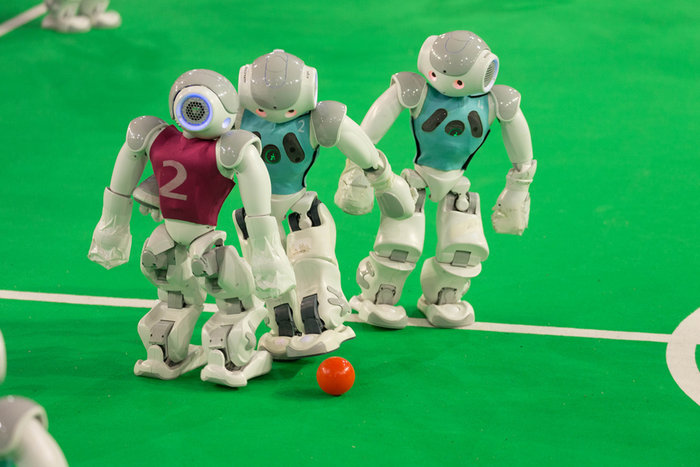 Sports
How to Fix a Soccer Game
In this excerpt from The Fix: Soccer and Organized Crime, Declan Hill investigates the intricacies of match-fixing in…