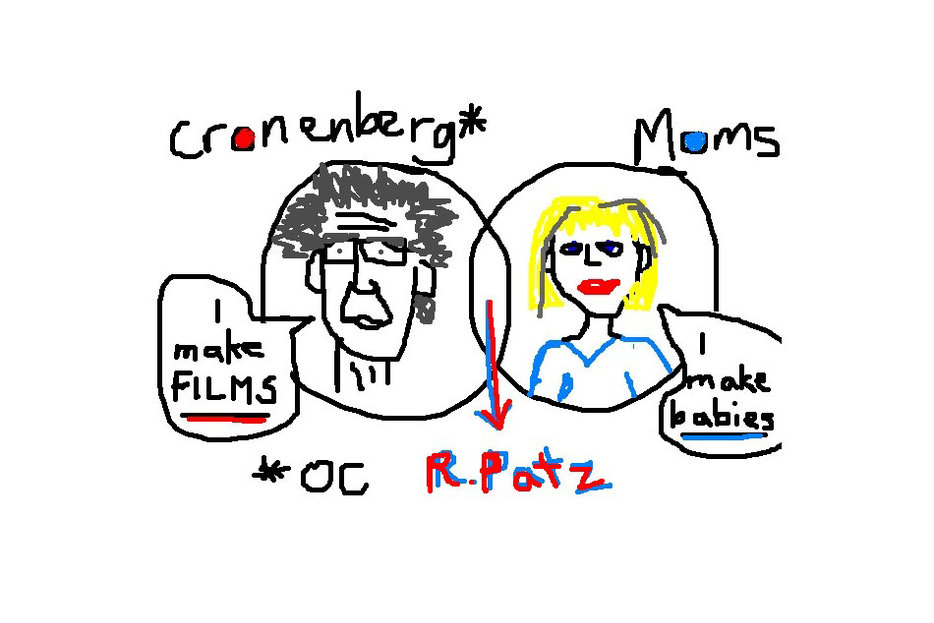 Moms: There when you needed them, a shoulder to cry on, and your best friend until you were six.

David Cronenberg: Made you sympathize with Viggo Mortensen’s shlong during a knife fight, introduced the concept of “wound fucking,” exploded someone’s head.

These two monumental figures seem miles apart. In fact, that scene from Crash is something you turn off when your mom walks in (not speaking from experience or anything). Still, there’s shared ground between mommy and the Order of Canada-having director of The Fly. And that ground is occupied by Mr. Bella Swan.

Some time ago, film buffs were a-Twitter about the now released Cronenberg-helmed film of Don DeLillo’s novel Cosmopolis. But that flagged when Cronenberg announced that his leading man would be none other than Robert Pattinson, he of the sparkly body and sorta-acting. Regarding this choice, Cronenberg said, “It pleases me to work with actors, like Rob, who have potential, but haven’t had the chance to show it.” Ooh, sideways burn! He goes on: “I know [Rob’s] big success is Twilight, but as you know Viggo Mortensen’s big success was Lord of the Rings, [and] it didn’t show him at his most profound as an actor.” Comparing Pattinson to Mortensen? Them’s naked knife-fighting words!

But you know who else loves R-Patz? Your mom. Or rather, tween moms. Who, apparently, rediscovered their sexual selves by the thousands upon watching the Twilight films. If you doubt this, check out TwilightMOMs.com (oh man), or this picture. Or this one. Or—wow—this one.

Maybe, as per usual, your mom is right. Maybe she sees something in Rob that we are unready or unwilling to see. We minus Cronenberg, that is. Of course, maybe it’s even simpler than that. Cronenberg is a master of the body horror subgenre, and moms know all about body horror—they birthed you, after all.

Comment
Pipeline Poker
With the Conservative government so determined to push through the approval of new oil pipelines, and the country…

Tangent
It’s Half-Empty, You Idiots!
Our silly, irrational, and absolutely necessary preoccupation with the best-case scenario.