A look at the films of Harmony Korine, from the dirty brown bathwater of Gummo to the pulsing, neon Florida of his new film, Spring Breakers. 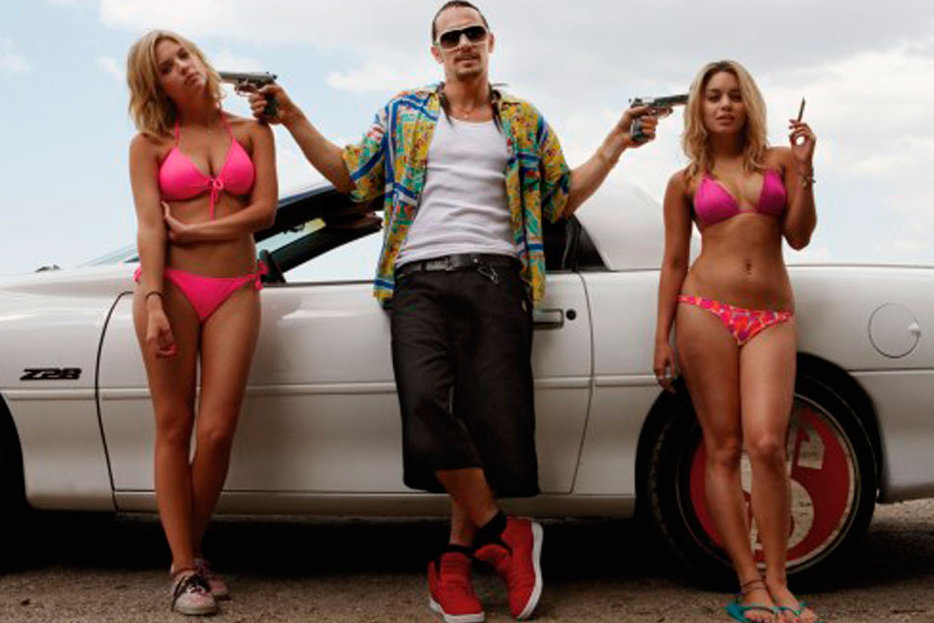 Watch Spring Breakers filmmaker Harmony Korine’s mid-to-late-nineties appearances on the Late Show with David Letterman and you’ll find a YouTube triptych of the artist as an unpredictable young man. They are not to be missed. His first time on the show, Korine has the coy face and shrill laugh of a boy set to prank a pretty girl, or explain a dirty joke to his grandmother. The next time, he mentions Snoop Dogg and Ulysses and Sally Jesse Raphael in the same breath, dismantling Letterman’s chatty stock questions in favor of madcap tangents, equal parts deadpan and class clown. He’s Andy Kaufman’s screwy little brother dressed like a mathlete. In his last appearance, though, Korine seems oblivious as to why he’s a guest in the first place, eventually griping, “Some of the people I come into contact with, I can’t stand.” To which Letterman mockingly responds, “You’re like a Mouseketeer. Who would have trouble with you?”

Sometimes the audience walks out. But those who stay don’t just meet his characters and the craters in which they exist—they experience and explore the space between their own lives and that of, say, a scrawny boy eating a plate of spaghetti in a tub filled with dirty brown bathwater. Korine is surely no Mouseketeer, and few things have seemed further from his universe than a singing and dancing pack of seemingly incorruptible Justins, Christinas, and Britneys. Until now, that is.

His new neonscape, Spring Breakers, co-starring Disney darlings Vanessa Hudgens and Selena Gomez, opened in limited release last Friday in New York and L.A. and will make its way to Canada next week. Grossing $270,000 over one weekend, it became, in two days, the most successful movie of Korine’s nearly two decade-long career. Kids, by comparison, grossed a little over half of that—Kids, which, had Disney had its way, might have never even found an audience. In order to sidestep the corporation’s rule against releasing films with NC-17 ratings, Miramax’s Bob and Harvey Weinstein created a one-off company, ultimately emancipating Kids from Disney’s paternalistic hold. Conceivably, Hudgens and Gomez had a similar plan in mind.

But it’s also about those four girls turning to toy guns for a quick thrill and then real guns for a revenge kill. It’s about being young and hatching a plan, because hatching a plan is the only way to fight middle-class boredom, and it’s about committing to that plan because “you can’t be scared of shit … You’ve got to be hard.”

The film also stars Ashley Benson of ABC Family’s Pretty Little Liars, Korine’s wife Rachel, James Franco as Alien, a local rapper and drug dealer, and “bikinis and big booties”—lots of those. Set in St. Petersburg, Florida, Spring Breakers is Korine’s satirical look at the American Dream—its toxic reverence for greed and its fixation with escape. As Alien feverishly declares while cataloging his “sheeyit” to impress the girls: “Look at my sheeyit! … I got … I got SHORTS! Every fuckin’ color. … I got designer T-Shirts! … I got Scarface. On repeat. SCARFACE. ON REPEAT.” Greed, escape, greed, escape. Shorts in every color, Scarface on repeat. Even the girls’ names—Brit, Faith, Candy, Cotty—sound sweet enough to have been plucked from a nursery rhyme or overheard in line at a carnival’s concession stand.

But it’s also about those four girls turning to toy guns for a quick thrill and then real guns for a revenge kill. It’s about being young and hatching a plan, because hatching a plan is the only way to fight middle-class boredom, and it’s about committing to that plan because “you can’t be scared of shit … You’ve got to be hard.” It’s like Now and Then, except instead of saving up for a tree house, they rob a chicken shack to fund their spring break. Instead of riding bicycles and stealing boys’ clothes from the lake, they roll with a drug dealer and make off with a pink Lamborghini. It’s Korine’s pervy and pyretic ode to teensploitation movies, a twisted take on Godard’s idea that “all you need for a movie is a gun and a girl”—a gun and a girl in a bikini, that is.

While wildly divergent from Terrence Malick’s Badlands, there are moments in Spring Breakers that cite the 1973 masterpiece, shortening the obvious gap between Korine’s previous work and his current feature. Sure, Spring Breakers is the director’s most commercial film yet, but it is also entirely kindred with Korine’s penchant for eulogizing what the world would rather not see. In Malick’s film, Holly (Sissy Spacek) falls for Kit (Martin Sheen) and the two go on a killing spree. Franco, of course, is no Sheen, and soft-voiced, freckle-faced Spacek is poles apart from a gun-toting Hudgens. But the descent into crime, the narration (a deluge of dozy voiceovers pepper Spring Breakers), and the sense that Korine, like Malick, gets high off of juxtaposed images, in some ways reconcile the directors’ works. Take Gummo’s cat-killing final minutes unfolding to the tune of Roy Orbison’s buttery “Crying,” or Malick’s divisive Tree of Life, which, like Spring Breakers, deviates from a familiar narrative structure to chase more surreal, kaleidoscopic metaphors. (If nothing else, both Malick and Korine, in Days of Heaven and Gummo, appreciate the potency of Linda Manz’ face.)

They also know how and when and where to slacken a story’s pace with a good dance number. Badlands had Kit and Holly’s “Love is Strange” jig; Spring Breakers has a sunset gun ballet accompanied by Britney Spears’ soaring piano pop ballad “Everytime.” In Korine’s film, the entire screen warms to a peachy shade, matching tanned skin with evening sky as the girls twirl and waltz. It’s like Disney’s Fantasia, but instead of ostriches and hippos, it’s pink ski masks, shotguns, and Britney.

Had Korine made Spring Breakers ten years ago, would former Mouseketeer Spears have starred? On her honeymoon with Kevin Federline in September 2004, she smiled for the cameras while wearing a neon pink T-shirt with the words “I AM THE AMERICAN DREAM” printed across her chest. Korine’s movies have emerged as chancy, far-out images born of single ideas—ones upon which he becomes fixated; it’s conceivable that the ex-Disney-kid-turned-meltdown-pop-queen’s honeymoon with her cornrowed dancer-turned-rapper husband was not far from Harmony’s mind when writing Spring Breakers. It’s almost too perfect that his name means the opposite of discord, that his debased, helter-skelter vision of what he considers an American rite of passage would star two actors whose careers up until now have involved posing with Mickey and Minnie mascots.

In 1997, during his second performance on Letterman, right before they cut to commercial, Korine plugs Gummo one last time. “It’s a new kind of movie,” he declares, and “things need to change.” When Letterman adds, “You represent the avant-garde,” Korine does not miss a beat: “I am a commercial filmmaker,” he says. “I’m a patriot.” 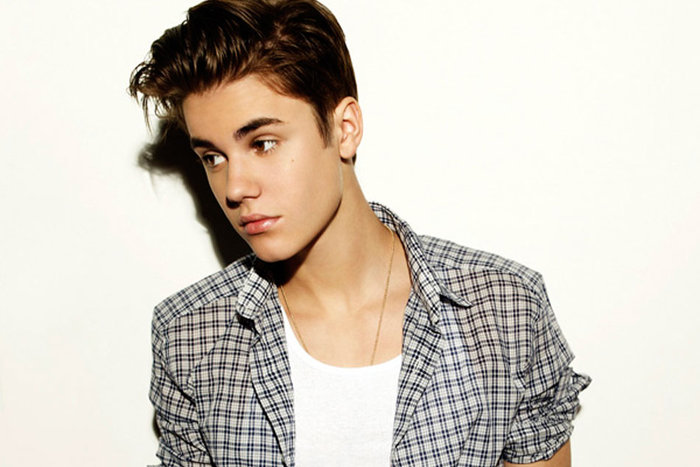 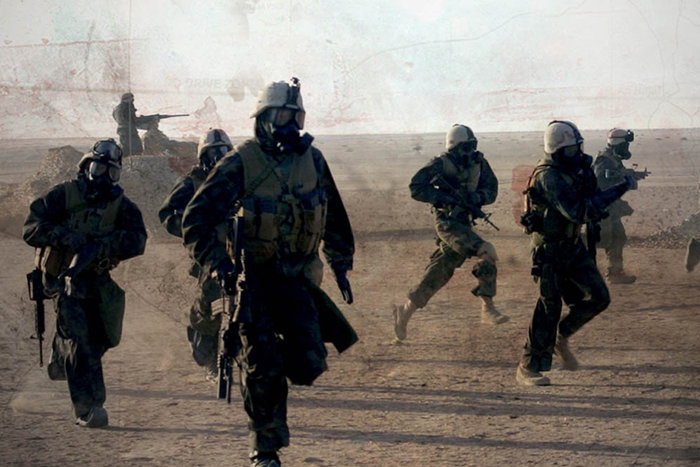 Politics
The Invasion and the Damage Done
This week marks the tenth anniversary of the U.S. invasion of Iraq. When counting up the horrible costs, is it possible…