Not a Land to be Mastered

For most Canadians, the existential frustrations underpinning the Idle No More movement are not even remotely conceivable unless you’ve visited a northern First Nations reserve.

PATRICIA PEARSON is an award-winning journalist and novelist whose work has appeared in The... 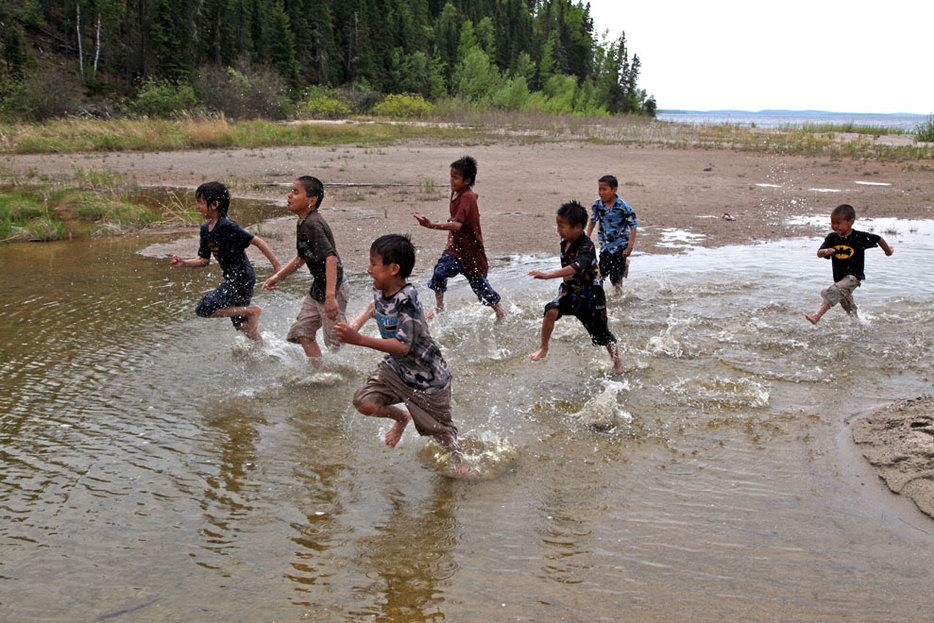 To find the Oji-Cree people of Summer Beaver First Nation, a scattering of 400 souls in Ontario’s boreal forest, you must first lose your own bearings. Abandon your compass, it won’t guide you. They may share residency in your province, and perhaps hold in common certain pieces of ID. An OHIP card, a driver’s licence. But their Elders were born in the bush, which troubles the paper trail.

Like their kin to the east in Attawapiskat, they have no cinema, no restaurants, no bank, no banquet hall, no playground, no Chief’s mansions. If a doorknob falls off a house, the nearest hardware store requires an airplane flight.

None of their experience is even remotely conceivable until you board a twin-propeller plane in Thunder Bay and head north for 600 kilometres, is what I am saying. You may fly with blank expectancy—gazing down at slate-coloured watersheds and stretches of spruce forest with a passing interest, as if this were in-between landscape, the way the Atlantic underlies a flight between New York and London while you watch a movie.

It is only when you arrive, at the teeny-tiny Summer Beaver airstrip, that you realize in a deeper sense that the oceanic forest, itself, is actually the destination, and that these hundreds of people are living here without a road to drive out on. They have been here for thousands of years and have never had a road, only the waterways, navigable by cedar canoe or banged-up boat, that follow a route along the great Severn River to the shores—about two weeks’ paddle—of Hudson Bay.

The week that I visited these vast engulfing woods, in the summer of 2010, the band had taken their children off-reserve—away from their crumbling houses and their single, unpainted store—to teach traditional skills. Their feel for the territory, which they navigate without buoys or signs, is extraordinary. Had our following boat run aground at any point, I would have been lost like Farley Mowat’s boy in the Barrens, never to find my way home.

At this “wilderness camp,” as they called it, as if the reserve itself weren’t half-way to Mars, I met Moses Beaver. He was a bear of a man wearing a bear-claw necklace, obsidian hair falling loose past his shoulder as he walked swiftly across the silver grey moss of the forest floor with a knife at his hip and no shoes on his feet, pointing at edible berries and gnarled cones of spruce—”you boil those in tea” he explained without breaking stride, “for strep throat.”

He imparted a dozen such wisdoms in a matter of metres because he was born amidst these trees; his mother would have used this springy, absorbent moss for his diaper. She and his father followed their trap lines until they came in to the reserve in 1975 at the behest of a distant government. Settle, they were told, or we take the children away.

Showing his young kindreds how to fashion a sleeping tent from a rough mixture of birch branch and sod was as natural to Beaver as my explaining how to Skype.

“A real Indian!” I found myself thinking, ridiculously. I felt like a German tourist. But I had never actually met a person who was raised in the wild, born on the ground he now tread, amidst muskeg and blueberry bush, for whom woodland was genuine home.

I could not even imagine what it meant. What would it be like to share your workaday mornings with black bears and wolves, with wild storms and freezing drifts of snow? What courage would that take? What absolute, specialized mastery?

“You’re a real Indian,” the children of Summer Beaver have said to Moses, he told me with the driest of smiles. “I say, ‘what the heck do you think you are?’”

Casting about on the forest floor, Beaver selected dry fingers of Dogwood and examined them. “This is the wood you want to make fire. Mmm-hmm,” he muttered in deep, laconic tones. Don’t bother with spruce or birch. Dogwood is what’s most conveniently flammable. He fashioned a kind of spindle, knelt down, and swiftly set friction to combustible flame.

Watching him, with his hair falling in a curtain across the rising smoke, it seemed to me that if I wanted to understand the crisis of the northern First Nations, I couldn’t think in terms of Dickensian poverty, or even Third World oppression. I had to understand a people for whom “poverty,” in an economic sense, was not the operative concept.

An individual is not poor. Instead, it is nature that is rich, that is bountiful. One gives thanks every day for that bounty. One offers it symbolically to the dead, in bowls of birch bark fed to flame. Land is everything, referentially. Land is life. It is God. To survive culturally is to retain this bred-in-the-bone understanding.

The trail that Moses led me on through the woods until we arrived at his lean-to was littered with empty potato chip bags, dropped by the scurrying children. They were listening to icons of American pop music, Katy Perry and Lady Gaga. They paid little attention when Moses expertly mimicked a goose call.

Later, I accompanied him around the gravel road of the reserve, as he kicked at the collapsing foundations of houses. He could camp without shopping at Mountain Equipment Co-op, but prefab housing materials—shipped north by Indian Affairs and dumped in piles—confounded him entirely. “We need to adapt, like the crow,” he mused. But he had no idea how.

That night, he went to sweat lodge, a low yurt lined heavily with bear furs. In the redolent darkness, the Elders sang in a way that raised the hair on the back of my neck, voicing their ancient songs as the grandfather stones hissed steam and the smoke curled.

For weeks, after this visit to Summer Beaver and two other reserves, I found myself at a mysterious sort of loss. If I sat down to write, I soon quit the task and wandered into another room. If I picked up a book to read, I felt restless. I began conversations and then lost interest in finishing them. When my daughter insulted me, as is her teen want, I withdrew in helplessness rather than ire. I wondered what the purpose of my life was, and then—as suddenly—I wondered if other people thought about the arc of their lives in this way, or were they more contentedly caught up in their pleasures and toils.

It seemed to me that I had just met a people who had, collectively, been robbed of their sense of meaning, and I was now absorbing that shock. I thought of a statement by the psychologist Rollo May, about illness as the inability to wish. I contemplated an outwardly jovial young man at Summer Beaver with whom I shared a round of funny stories, whose siblings and girlfriend were buried across from our motel in the graveyard: a meadow of suicides.

The greater shock was that we had done this, to him, and to them. And instead of owning up to it, we now denounced them as corrupt thieves. As lazy slobs, as liars.

Once, when grief was consuming him, the young man told me that an eagle flew to him as he paddled his canoe. He stepped ashore and the eagle allowed him to pick it up and carry it around, as gentle as a cat, and then took wing with his grief in its talons. He marveled at this, and also at the patient timber wolves that encircled him one night in winter when his stalled snowmobile stranded him overnight on the lake.

Guardian land. It was pulling him back from the brink. I realized that I’d misunderstood Moses, when I considered his mastery of the boreal forest. Theirs is not a land to be mastered—that is our land. How we think. Their land whispers, it advises and warns and consoles.

We think the First Nations will survive by abandoning their home territories and assimilating into our high-consumption, resource-extraction culture. With Idle No More, they beg to differ. They think they’ll survive by defending the land. 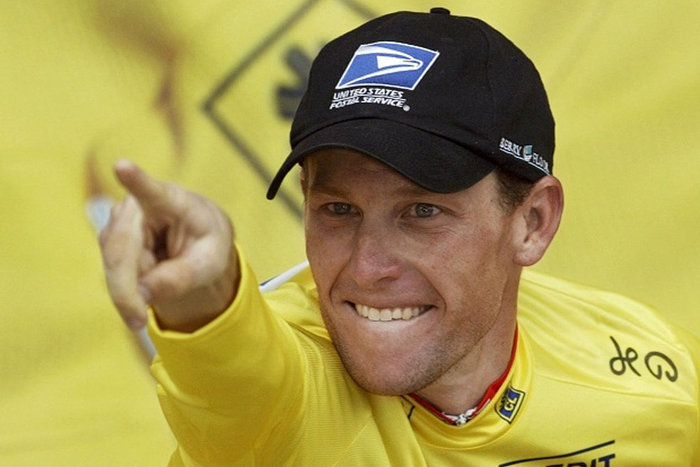 Marginalia
All Apologies: Armstrong-ing Your Life 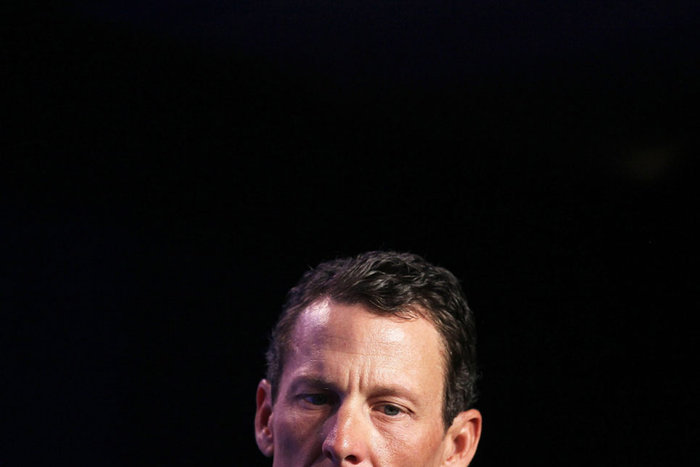 Essay
Lance Armstrong as Study in Corruption
The spectacular maelstrom that is Lance Armstrong Inc. teaches us how power, backed by lots of money and self-…